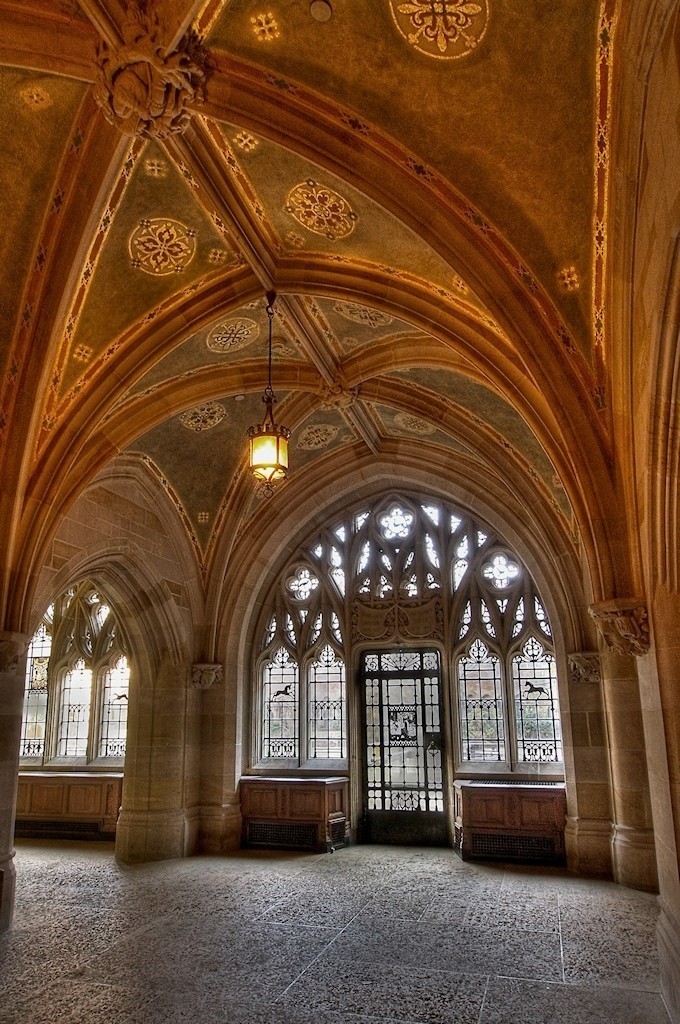 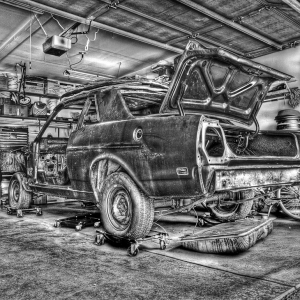 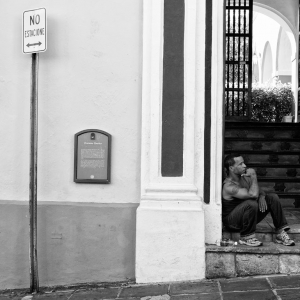 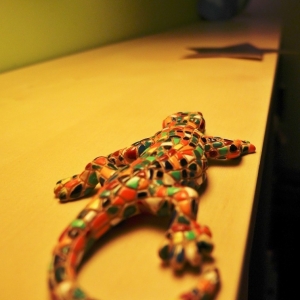 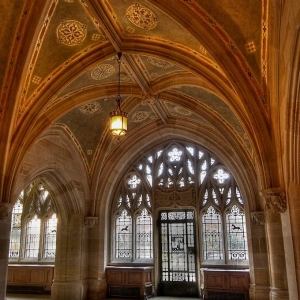 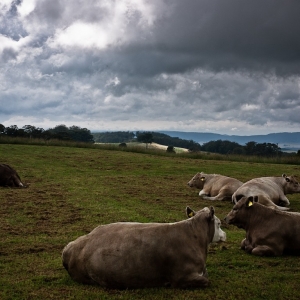 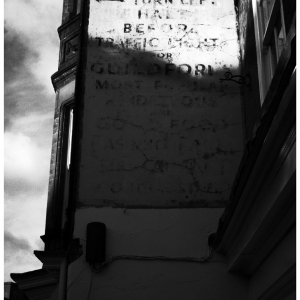 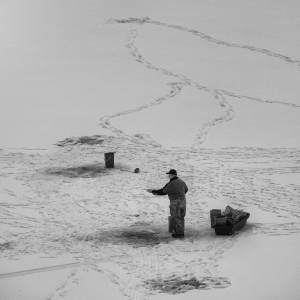 This photo is from Sterling Memorial Library, on the first floor, in a section called &quot;Cloisters.&quot; The Cloisters is a long hallway lined with these windows, and you can see that it goes off to the left here. This is from a hallway off of Cloisters that leads to the Irving S. Gilmore Music Library.

Sterling Memorial Library is the largest library at Yale University, containing over 4 million volumes. It is an example of Gothic revival architecture, designed by James Gamble Rogers, adorned with thousands of panes of stained glass created by G. Owen Bonawit.

The Library has 15 levels, each with its own category of books. In 1971, the adjoining underground Cross Campus Library was built. It was renovated and renamed to Bass Library in 2007 and connects to Sterling via an underground tunnel. Bass Library currently contains an additional 150,000 volumes.

Although the original architect, Bertram Goodhue, originally intended Sterling to be taller and resemble the State Capitol Building in Lincoln, Nebraska, plans changed under the new architect James Gamble Rogers.

Rogers created the library in the image of a Gothic Cathedral, even going so far as to model the circulation desk after an altar. He even required that the library be seen from the street. As a result, Berkeley College was divided into two sections in order to create an unobstructed view of the cathedral-like library. It was designed as a memorial to John William Sterling (Yale 1864), name partner in the New York law firm Shearman &amp; Sterling, who donated around US$29 million to Yale upon his death. Sterling Memorial Library, which Rogers remarked was &quot;as near to modern Gothic as we dared to make it,&quot; is made up of fifteen stack levels and eight floors of reading rooms, offices, and work areas. Work on the library was completed in 1931. It was at this point that the library was moved from Dwight Hall (previously pictured) and Dwight converted to use as a Chapel.

This was a difficult photo to take. it was hand held in relatively low light, and the light was mixed incandescent and natural. Furthermore, while it could do with some perspective correction, this would result in far too much loss of detail in the ceiling treatment, so I left it as taken.
Click to expand...
Gorgeous, Seaain. What a treasure you have up there at your disposal to experience and photograph. I can't remember what sort of camera setup you're using but you're doing beautifully with it.
Retains your distinctive colour rendition woof. Stand-out for me here is the composition though...excellent use of leading lines and the rule of thirds. The balance of light is great too - very well controlled indeed!
What beautiful old buildings you are surrounded by, there at Yale. I'm enjoying your SIJ works
wow, that's a great composition, with lots of detail everywhere but not too busy, and in one photo you incorporated so much of the beautiful architecture - great use of your lens! Also the exposure is spot on
Thanks all very much. This one really took some work both in capture and post.

>> Gorgeous, Seaain. What a treasure you have up there at your disposal to experience and photograph. I can't remember what sort of camera setup you're using but you're
>> doing beautifully with it.

I am very fortunate indeed. I'm shooting an E-PL3 with Oly m.Z 9-18mm - all photos shot at 11mm.
Very good indeed!
Another masterful shot - a little HDR to bring in more window detail would be nice but this is well exposed for a single shot.
When I saw the thumbnail I thought "Yale" and couldn't wait to open the image. Very nice architectural shot.
Looks very interesting if slightly over-processed! Interesting building as well.
Beautiful.