I'm completely having a mental meltdown over which of these two lenses to pick.

I rented the 15mm Voigtlander through LensRentals for my Hawaii trip, and got some great pictures with it -- which I mostly don't have online. Here is one.

However, part of me wants the 12mm.

On the other hand, if you need those things that are 12, 13, 14mm and not within 15mm, you're never going to get it with a 15mm lens. Grebeman has done some compelling photos with the 12mm.

So, I can't decide. Part of me thinks I'd be happier overall with the 15mm, but a part of me would always regret not going for the 12mm. The increased size of the 12mm might keep me from carrying it around. You can see the photos here; the 15mm is the left front lens; the 12mm is the left rear lens. I own the 28mm that's immediately to the 12mm's right.

My 2 cents with any lens purchase - I'm usually only concerned mainly with two things, the price and the f/stop. I want to have the lowest f/stop for the most flexibility and applicability in different situations, and of course price concerns speak for itself.

If I were in your place though, the cheaper and faster 15mm would probably win me over, particularly taking into account your list of advantages that would come along with it. I could probably do some panorama (multiple shots stitched together in post) with that 15mm if I really wanted an ultra ultra wide angle shot.

The 12mm I think is a slightly more specialised lens by the barest of margins.

What would make me re-think my position is if I had an M9 or other high mega-pixel camera where I would have room to crop. A 12mm would then offer a slightly wider range of potential options in that way, ie. compose, take a shot, maybe re-compose by cropping in post or maybe pulling two 1:1 photos out of the one 12mm shot, that kind of thing.

NB. I haven't read any reviews of these two lenses so I don't really know the pros and cons from a specific technical point of view.
D

It's generally regarded that the 15mm is the better lens, technically speaking.

Here's one with an M8 in an application I wouldn't have thought of, frankly. Nicely done.

Don't know why but my work computer won't let me view those pages. I'll check them out when I get home.

Thoughts on the Voigtlander 12mm and 15mm lenses

I got my 15mm lens first and was very pleased with it on my m4/3 cameras (G1 and GF1) where of course it equates to a 30mm lens on 35mm format.
I thought long and hard when it came to the purchase of the 12mm lens, equating as it does to a 24mm lens on 35mm format (both were obtained secondhand, and are the screw version). This was partially due to my relative lack of inexperience in using lenses wider than 35mm on 35mm format with previous cameras I have owned, and also looking at many photographs taken with the m4/3 native lenses of 7-14mm and 9-18mm where I wasn’t happy with what I interpreted as unacceptable distortion of the resulting image, though these shots were probably at the very wide end of their ranges.
Since getting the 12mm lens it has been a steady process of getting to like it. What finally convinced me was when I came to investigate the vignetting issue which undoubtably occurs with both these lenses. When I started to apply vignetting correction to the image obtained I became a fan of the 12mm lens. I have now made presets to apply vignetting correction at the post processing stage (I use Bibble Pro 5 for my raw file processing)
Personally I wouldn’t want to go much wider than the 12mm lens on the m4/3 format, your use on the Sony Nex will of course make it wider in equivalent terms.
Interestingly there is a test of this lens on a Sony Nex at All Tests / Reviews and the results are quite interesting, the centre performance at f/5.6 is slightly better than the Panasonic 20mm at f/5.6, the edge performance somewhat poorer, at f/8 the centre performance is a good deal better than the Panasonic 20mm and the edge performance is comparable.
The real proof of course is the end results to the observer. So far I’ve only used the 12mm for landscapes, but I have used the 15mm for landscape and some street work and been happy with the results. I am now in the silly situation of having 2 GF1 bodies with the 12mm attached to one and the 15mm to the other, both being virtually permanent fixtures, for non tripod mounted shots I tend to use suitable optical viewer mounted in the hot shoe, for tripod shots I compose the shot on the rear screen like a miniature view camera, this technique of course is normally used with landscape photographs.
With regard to weight, the 12mm is approximately 230 grams and the 15mm approximately 155 gram.
I hope the above observations haven’t clouded the issue for you. 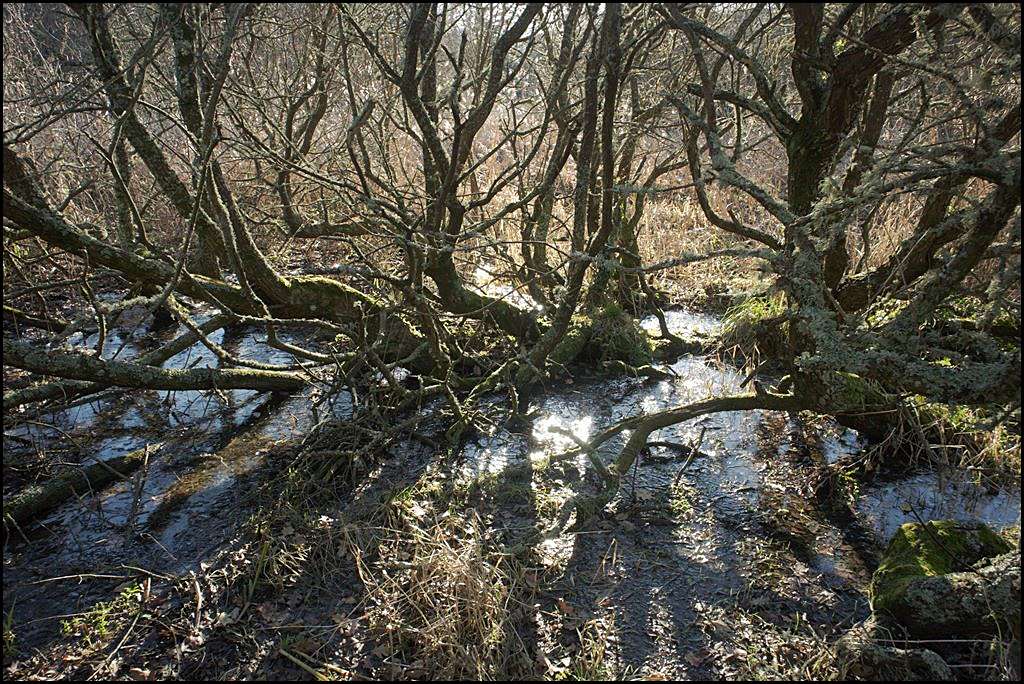 Taken against the light, although the sun is out of frame and somewhat shielded by the tree, hand held (despite being a landscape!)

Grebeman, I figured you'd be the authority on this!

To be clear, I don't have a Sony NEX, I was just comparing some photos taken with the lens, some of which happened to be using the NEX, so I had to take the crop factors into account.

It sounds to me more like I'd be happier starting with the 15mm and then considering the 12mm if I found that I needed it. I'd be using the M-mount lenses because I really want the rangefinder coupling.

Age getting the better of me!

deirdre,
Sorry, why did I conclude you were using a Nex , has to be an aged related thing, at least that's my excuse and I'm sticking to it (Bill will know the feeling, sorry Bill).

just started - so you may want to follow it

deirdre said:
It sounds to me more like I'd be happier starting with the 15mm and then considering the 12mm if I found that I needed it. I'd be using the M-mount lenses because I really want the rangefinder coupling.
Click to expand...


I had a look at the photos on the links you posted, I can see why you want the 12mm. I read a few reviews of Voigtlander lenses at Steve Huff's website and in pretty much all of them (I think three Voigtlander lenses were reviewed) showed that vignetting and/or less detail or soft on the edges, even the ones tested on the M8 (with the 1.3x crop) before he got the M9. But the general conclusion was that the lenses were still amazing for the price range. I'm really tempted to get a few Voigtlanders as a starting point for my M8.
D

Well, I found a good deal on a used 15mm. Sometimes the universe decides for ya.

haha I like that. I've often deferred to the universe myself.