A little background: The blue barrels labeled "Agua" are placed along roadways in south Texas to aid the migrants crossing the border. Each year many die from dehydration after becoming lost and often their bodies are not found for years. Groups place the barrels filled with gallon jugs of water in an effort to keep people alive; even the Border Patrol has water stations set up. Critiques welcomed. 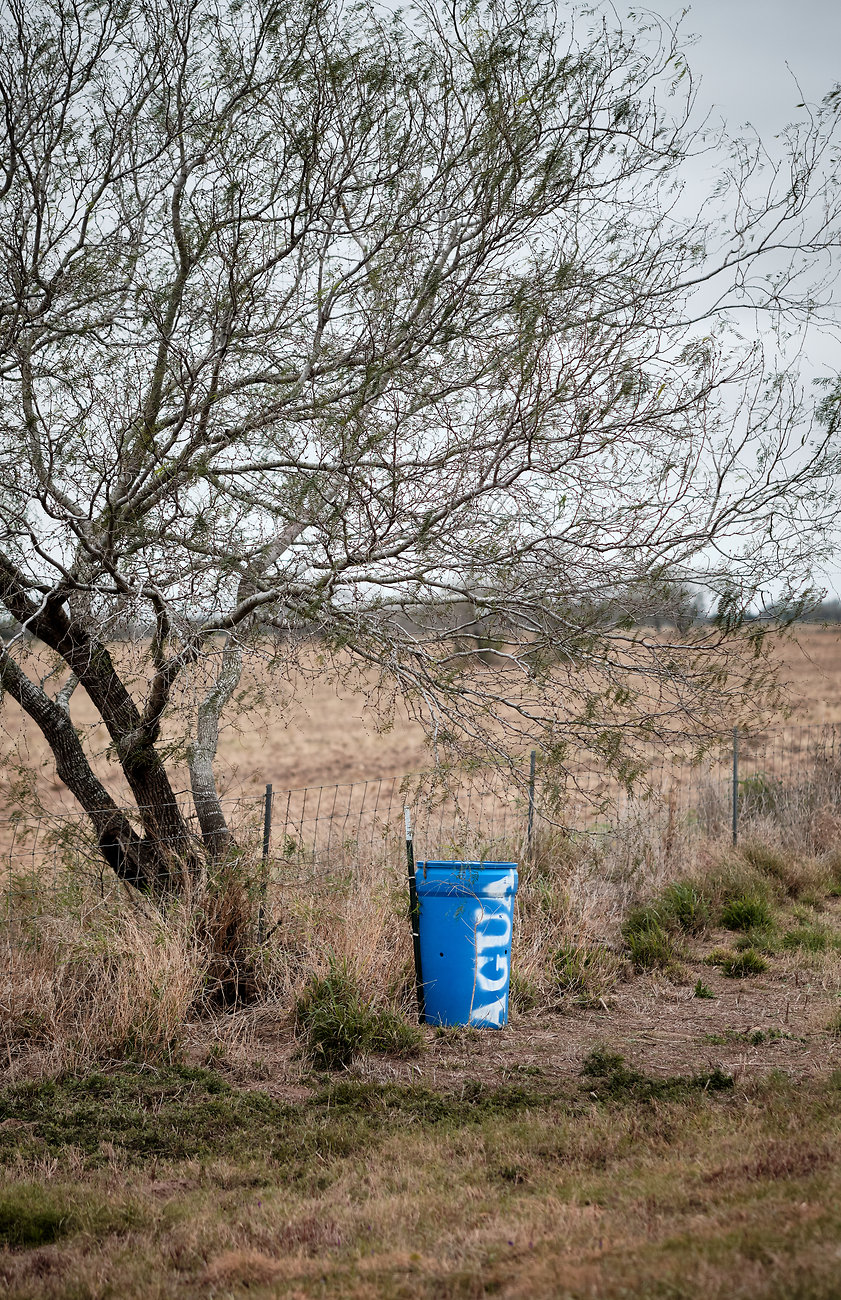 I'm not sure how to tell you to create a more compelling image not having there to see any potential different angles. But I can tell you that I (almost) never like a photo where the horizon is in the middle of the frame, nor do I (generally) like a subject that is centered (left to right). My tastes in composition generally adhere fairly strictly to the Rule of Thirds.

Knowing the story behind the barrel is cool.

I think I would have tried to either fill more of the frame with the barrel....or really minimize it to give the viewer a better idea of the vastness of space and the perils of the border crossers.

I'm in agreement with Luke. I'm guessing based on seeing similar things but my approach would be to step back a bit, moving to the right of the current image. Use the tree to create the left frame - from ground to up and curving over the barrel. Keep the tree and the barrel in the left third? Then the fence and the plains off into the distance will show why there is agua there

I would use a normal or even slightly long focus lens. The modem temptation is to use a wide or worse yet a superwide and HDR. Too wide will lose the immediacy of the story and the dry winter colors are more appropriate as well.

Despite how this might sound, I find this a good image, I just think that to my taste it could be even better.

Hopefully these thoughts are of use.

I must say that the story behind the picture gives me a shiver. As such the not-too-contrasty and slightly cool tones are appropriate IMHO. The barrenness of the land comes across well. The picture in itself isn't stunning, but this one's about the story and for that the picture is more than adequate. The mid-frame horizon doesn't bother me because the tree fills the upper half and the barrel is nicely placed in the center of the lower half. Knowing the background makes me keep looking at it.
Last edited: Friday at 3:18 AM

Some things are just not easy to photograph in an interesting / compelling way, and that barrel may be one of them. I've a feeling that if I had to take a picture of that particular barrel I would be circling this way and that, crouching down and standing up, moving closer and then further away, zooming in and out and generally worrying away at it, and probably wouldn't do much better than you have, in terms of telling the story you gave us in words.

You might "improve" the composition by applying the rules which Luke has mentioned, but I think that context (or lack of it) is key here.

Thanks all for your candid comments. I did use a longer lens, but as you said something is missing. Fortunately the site is not far from where I live and I can reshoot. The only difference is the tree will be in full bloom now, but it will be interesting to see the difference. Thanks for the help.

To me, the central horizon and centered barrel placement are just fine, graphically speaking. There is a slight V shaped triangle formed by the horizon, tree and fence, with the barrel at its base. The branches fill up the upper half nicely. The vertical (portrait) orientation makes this triangle work better, too.

As a storytelling tool, I agree with Luke, showing more of the emptinees of the landscape might help.

If that tree is the only one in the immediate area, a wider, horizontally oriented shot with the barrel dead center (ignoring all rule of thirds and golden ratios and other such "pleasing balance rules") can be very effective in showing the tree and barrel's isolation.

Alternatively, for a different take on the vertical orientation, walking some way along the fence and allowing that to be your leading line to the tree and barrel can imply the distance to be walked, and that the barrel is a distant target. Having the barrel at the top of the frame allows for a longer fence and longer implied walk (you could accentuate the texture of the terrain that one has to walkxon in the foreground). Having the barrel / horizon mid frame in a vertical shot enhances the "big sky" effect.

If you're gonna have the barrel be smaller in the frame, waiting for a sunny day to make the blue pop more might work.

I just realized that the AGUA letters would probably not be legible if you were to stand alongside the fence. If you walk straight back from your current vantage point, would there be a road parallel to the fence? If you can walk a decent way beyond the road, to show the road and fence as a line across the barren landscape with the tree and barrel as a punctuation, that might be nice as well.

Hi, I wanted to give my 2 cents for this discussion. Sometimes you can't approach the target as you would like to and give it a more suitable point of view and background. Then you could use your digital camera's technology to help, or post-processing as I did. I hope @Dean Smith, that you don't mind that I did a version of your pic with TiltShift App in post-processing.

Just quick example and below that making of -screenshot. 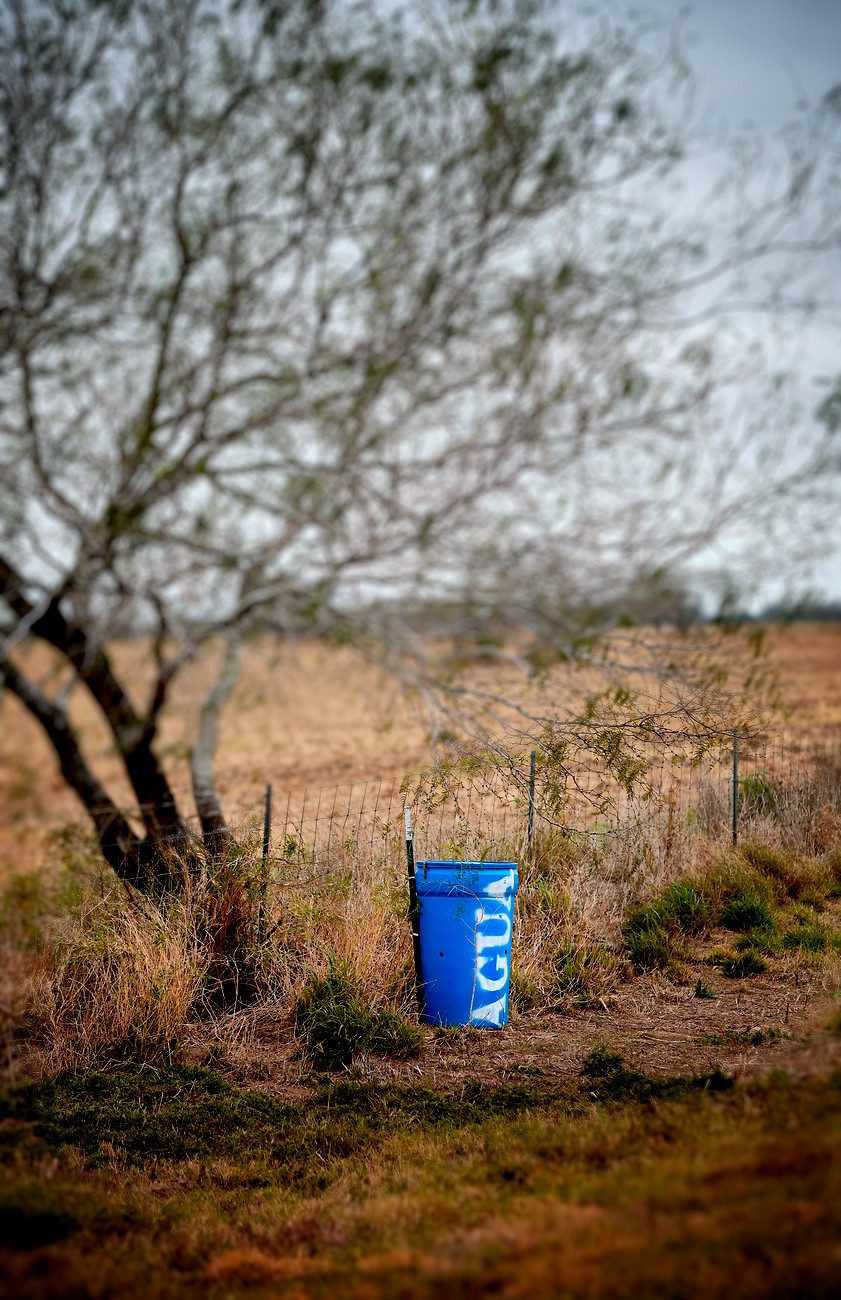 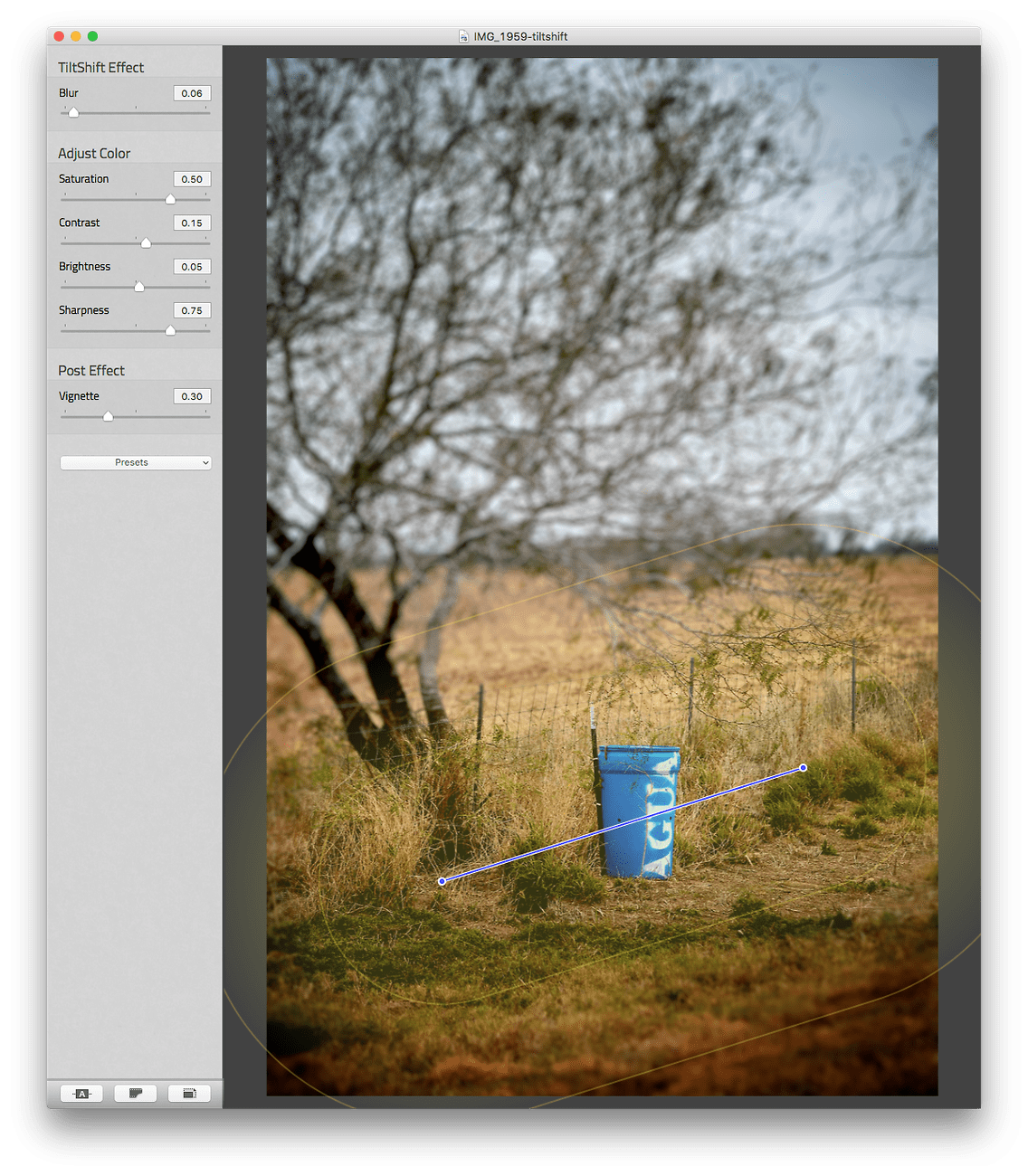 I don't understand why people who place things in a nature setting don't consider photography. I would suggest moving the barrel to the left side of the tree so the tree trunks and branches would form an arch over it from the right. But that would require a post hole digger, a Bobcat with a bucket to lift the container, and at least a six pack of beer!

I'm also one of those who basically try to avoid a middle position of an object (exceptions confirm the rule). And I often stick to the more "classic" rules of composion (the thirds mentioned above). Yet I keep from judging what's better or worse as this is largely in the eye of the beholder.

I prefer a different approach: trying different crops if I don't like the one taken, looking at these in comparison ... and most often the decision is obvious, no words needed. So my spontaneous changes would look like this (see attachment, click to enlarge). There is cropping to get the horizon and the barrel into the thirds and slight work on the colours. No question of better or worse, just a matter of taste ... and as we all know pretty well, tastes fortunately differ a lot.

Hope you don't mind my PP, I just think a picture usually tells more than words.

Again, thanks all for the comments.
Matero: The use of the tilt-shift app is very interesting.
Brent: In an attempt to lighten my camera bag, I left the bobcat at home--otherwise...
Walter: I like your crop and will consider when I get back to the photo.
You must log in or register to reply here.
Share:
Facebook Twitter Reddit Pinterest Tumblr WhatsApp Email Link

Critique Wanted Your image for Critique!