All things Hi-Fi and Audio - show and tell and discussion

MountainMan79 said:
Totally agree. Thats why I chose drivers that will play nice together in a first order setup…something I suppose I wouldn’t need to give any thought about if I was only using 1 speaker. The only time I’ve ever bothered with a second order is if I’m using a more exotic tweeter like a ribbon that just needs a bit more protection at the lower xover frequencies I prefer, or building the occasional 3-way system.

Single source was all the rage over here too for a little…I never jumped on board that one. I like my 2-way systems too much. Those are certainly good looking speakers though. Hopefully you aren’t a masochist too often!
Click to expand...

I got the Abbies out of curiosity and maybe a bit of nostalgia. I used to know a guy who held these hifi-gatherings every now and then not too far from where I live, and he had a setup consisting of a turntable (Michell Gyro SE, later upgraded to an Avid Volvere, SME tonearms in both), a Naim Nait 2 and a pair of Abbies. I remember liking the sound of that system, so now more than a decade later I bought the Abbies without listening at sight, since they were on sale for dirt cheap, and I wanted something in the guest room in the meantime before I get the 8" coaxes finished.

Now, I used to wonder why that guy liked that Naim amp so much. I had it in for a while for a potentiometer replacement, and tried it in my own setup, and found it hopelessly dark and muddy sounding. Now I know... That muddy sound played well with the shouty nature of those Fostex drivers.

Some single driver speakers have their merits, to be fair. Mostly they are 4" or smaller and make not a lot of bass.

Back to crossovers... I really don't care much for what the electrical slope of a crossover is, as long as I get the acoustical slopes to match and do that at a point I want them to. That is usually at a point where their directivity patterns also match as closely as possible. I know controlled directivity is a very finnish thing in loudspeakers, but there is some sense to it...

The Electric Squirrel said:
But it shouldn't be taken so far as to hamper functionality.
Click to expand...

Yeah. Speaking as someone who comes to this from the pro audio side, most folks on the extreme simplicity side of audiophilia would likely be appalled if they took a look at typical rigs, studio gear, and how tracks are laid. Placebo effects aside, a lot of what I see going on in hi-fi is consumers compensating for poor engineering. There's bad gear on the pro side too but, generally, standards are higher and prices considerably lower as you're not supporting upstreet margins and appearance oriented bills of materials.


The Electric Squirrel said:
I know controlled directivity is a very Finnish thing in loudspeakers, but there is some sense to it...
Click to expand...

A frequency stable radiation pattern for coherent direct path and room reflections is a fundamental of speaker design across all types—point source or line source with omni, cardioid, or dipole—it's just that few hi-fi speakers implement it even kind of sort of well. Standard commercial design choices (two way LR2, box speaker, rear ports) pretty much guarantee problems with acoustically large drivers, cone breakup, and mistimed port firing. Not that there's any tweeter which doesn't become acoustically large but, based on ABX testing and measuring quite a few driver and crossover configurations, I'd say it's worth trying to get it right as much as you can.

A much simpler solution's a decent pair of IEMs, though.

archaeopteryx said:
Yeah. Speaking as someone who comes to this from the pro audio side, most folks on the extreme simplicity side of audiophilia would likely be appalled if they took a look at typical rigs, studio gear, and how tracks are laid. Placebo effects aside, a lot of what I see going on in hi-fi is consumers compensating for poor engineering. There's bad gear on the pro side too but, generally, standards are higher and prices considerably lower as you're not supporting upstreet margins and appearance oriented bills of materials.
Click to expand...

Pro audio and hifi/high end audio have partly differing objectives. The former is actually a much broader field, consisting of anything from studio monitoring to stage stuff and further... The latter, on the other hand, is mostly just stuff for the living room. Even if we compare studio monitors with home audio, we still find (slightly) differing requirements. A bit like comparing medical photography - where warts and scabs are documented - with portraiture, where warts and scabs are hidden. I know, I'm exaggerating a bit. On purpose.

My philosophy on Hi-Fi has for long been that if it doesn't make music sound enjoyable, it's useless.

And yes, the field of home audio is colourful to say the least. It includes brilliant engineering made even better by brilliant design, some more mediocre but also more affordable stuff, some makeshift boutique stuff, and yes, some blatant snake oil. I only take objection to the last part.

The Electric Squirrel said:
Even if we compare studio monitors with home audio, we still find (slightly) differing requirements.
Click to expand...

Yeah. While monitoring and hi-fi both ostensibly have the same design objective and listener preference—sound in equals sound out—perceived sound quality of a speaker under hi-fi sales practices is primarily controlled by how it looks and how big it is (primary source for that's Harmon Kardon studies, though it looks like they've taken them off their website) most of the BOM is therefore allocated to non-acoustic things. Which isn't anything against speakers as furniture but the hi-fi market's still structured for low financial efficiency with respect to acoustic performance where pro audio's a good bit more price sensitive. Showroom auditioning also tends favor taking a speaker off flat to get it to stand out from the others and make a sale. Easy enough to equalize it back, given that flexibility from a digital source, but it can get a bit silly.

Similarly, the default unbalanced interconnect, attenuating preamp, unbalanced interconnect, power amp, passive crossover, driver signal chain's good for sales but rather a trainwreck from an engineering perspective. Not that it doesn't also appear in pro audio but balanced interconnects are standard and equalization, active or digital crossover, DAC to line, and multiamping's more common. Pro audio circuit design and implementation not uncommonly been quite a bit better in the stuff I've taken apart, even at much lower price points, which mostly results from lack of engineering fundamentals on the hi-fi side. I'd suggest that disparity's not so much the result of different requirements as it is hi-fi market incentives which don't really favor the end listener.


The Electric Squirrel said:
The latter, on the other hand, is mostly just stuff for the living room.
Click to expand...

Traditional hi-fi, yes. The more compact and (generally) affordable USB DAC plus headphone side to hi-fi, not as much. I've the measurements to show the monitor/speakers I've built are competitive with anything else that's made, both in time and frequency domain, but they're not as clean as a good IEM. So I've pretty much just used these for the past several years.

(Some mu-43 folks will have seen this focus stack in a similar thread but I've deleted all my images from there.) 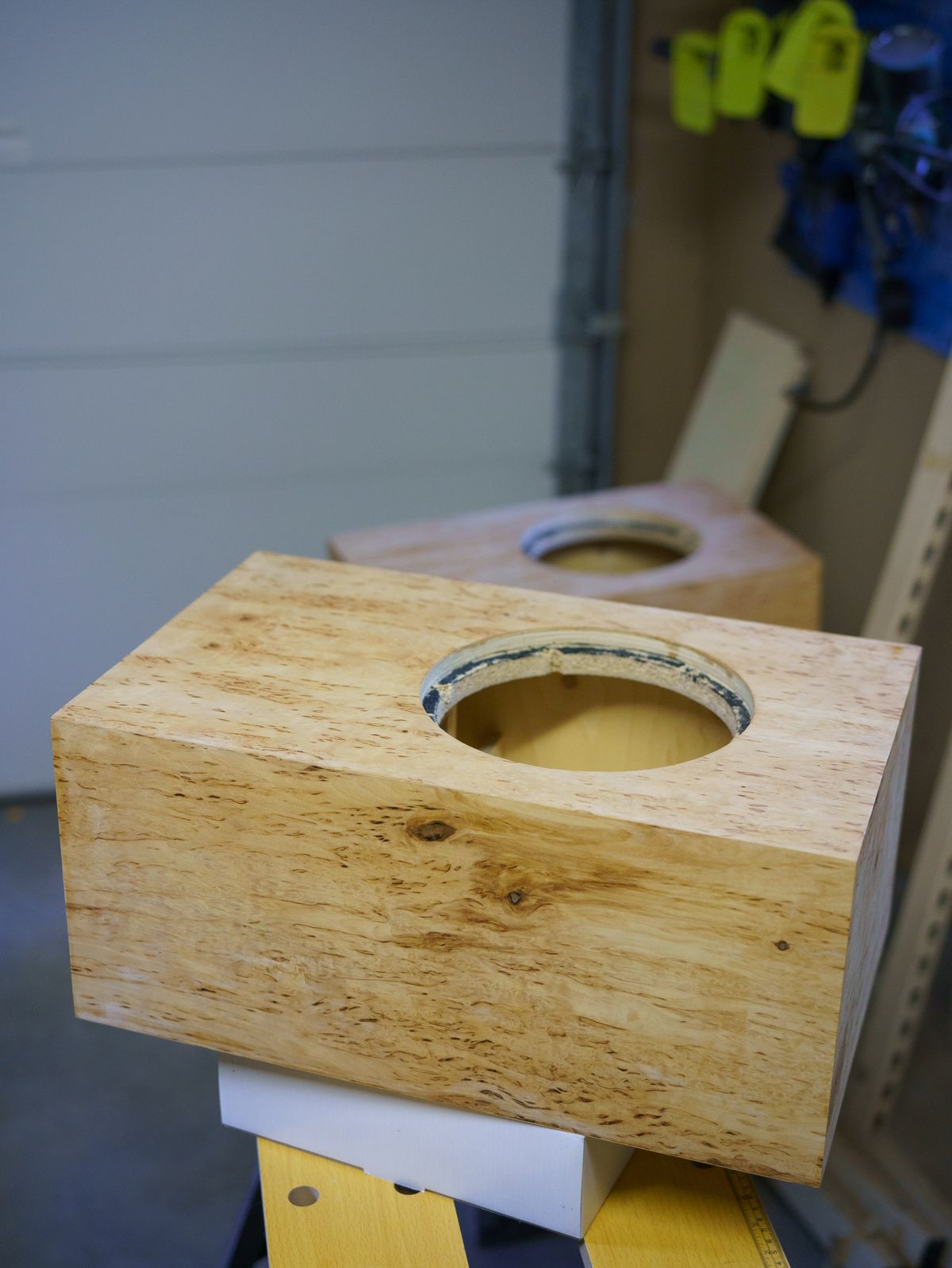 I feel my points were somewhat missed here. But lets get back to the "show stuff" instead of 'pinions... Here's my makeshift garage (not even boutique) speakers in the making. First coat of hard oil wax applied. Now to let them dry enough that I can give them a light sanding between coatings if needed... If all goes well these will make music again in a week or two.

P
Two White Things, and A Purple Thing, In Hedges, On Verges