I've taken my ZX1 to a couple fo gigs with differing results.

The first (Jim Bob) was a tiny venue, relatively well lit, with just one person on stage and we were pretty close to the stage.
Most of the shots I took were with Shutter Priority set to 1/125 and Auto ISO (resulting mostly in ISO400) and no flash. The results were a little dark, and a little noisy, but not terrible.

The second (PiL) was a medium sized venue, normal multi-coloured stage lighting, and we were right at the barrier.
Most of the shots were taken with the Low Light setting, Auto ISO (again resulting in mostly ISO200) and no flash. I was disappointed with most of the shots as most had shutter speeds of about 1/15s and obviously were really blurred.

Nearly all the shots from both gigs had an apperture of around F2.2 (depending on zoom).

I understand why all the shots have ended up as they have, but does anyone have any recommendations on what the best settings would be for gigs? Low Light let me down badly, so I'm wondering if Manual exposure of 1/125s, max apperture and ISO200 would be best and just try to compensate for under exposure in PhotoShop is the best way to go.

I'll assume you mean the XZ1 and go from there. Something's gotta give in extreme low light situations like that with a 1/1.63" sensor. And it's gotta be the ISO. You're already maxed out on the aperture, so bump up the ISO and embrace the grain.
K

idris said:
... I'm wondering if Manual exposure of 1/125s, max apperture and ISO200 would be best and just try to compensate for under exposure in PhotoShop is the best way to go.
Click to expand...

Try bumping ISO in stages, you already know 200 is a bit dark. you could increase and chimp as you go. I used to shoot friends' gigs with b&w film, always used a 400 film, and adjusted shutter speed and aperture accordingly. Aperture i tried to keep at 5.6/8, but that meant a slower shutter. It seemed to work OK.
J

I agree with Rajiv and Sue. Also, shoot RAW if you don't already, and post process the files in Lightroom 4.

Low light, zoomed in, and enough action to need a reasonably fast shutter speed - a pretty challenging situation and one where pure horsepower helps a lot. I was amazed at what I got with the RX100 at a concert the other night, but I was in the second row and shot everything at ISO 3200. Which, amazingly, that camera can handle but most compacts fall apart well short of those kinds of ISOs. I'm not sure you can finesse stuff like that. The RX100 handled it. The OMD with the 45 or 75mm lens (both f1.8) would have handled it a lot better. A DSLR with some really fast telephoto would have been the best bet. In situations like that, the tools really start to matter a lot.

I'm sure ISO 800 is good enough and as Rajiv points out..... if you embrace the grain, I'm sure you can get away with ISO1600.... you probably would have to convert to b/w, but there's just not many options once your aperture is all the open. It's either choose noise and higher ISO or motion blur.

You may choose to go with motion blur and choose when to shoot. Sometimes, when I'm not able to get the shots I want, I just sit back and enjoy the show. It's not like there aren't already a million great photos of those bands already.

Can I see a couple photos of the PiL show? I used to listen to them in pretty heavy rotation back in high school.
I

Ok, so the consensus is that ISO/grain is the neccessary compromise.
What would you recommend on max shutter speed and is Manual actually the best setting?

As for using RAW and Lightroom:
I realise RAW is just what the sensor records and JPEG is compressed, but what advantages should I actually expect to see easily?
And is there anything I can do in Lightbox (in terms of "post processing") that I can't do in Photoshop 7? I assume you're talking about adjusting level, hue, contrast etc.

For Luke, here are some of the useable (unprocessed) photos.
If you're into PiL, they're touring the States very soon. If they're anywhere near Milwaukee definitely go and see them. One of my top 3 gigs ever, MASSSSSSIVE bass, and the best live sound mix I've ever heard (and that's my professional opinion). 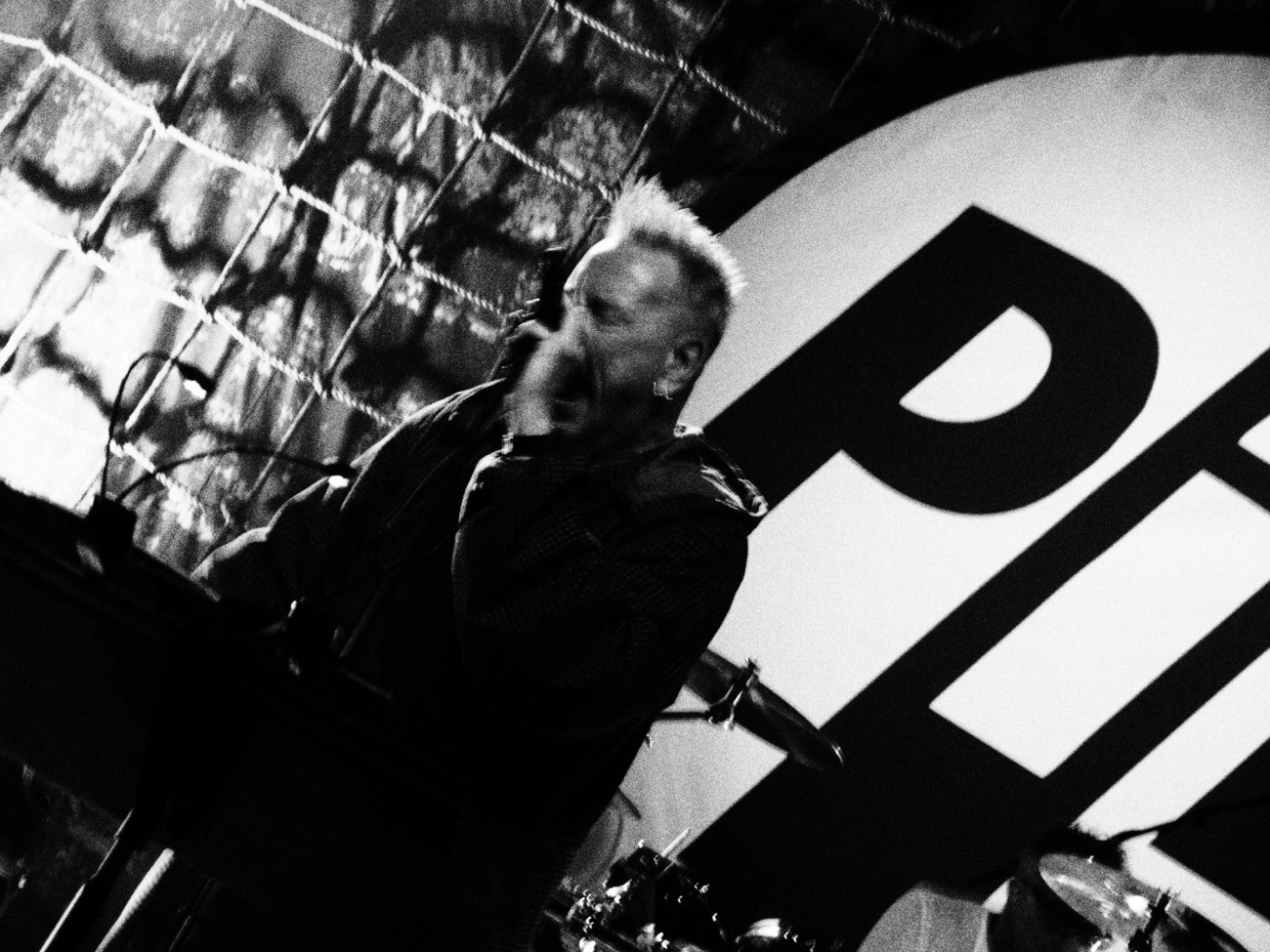 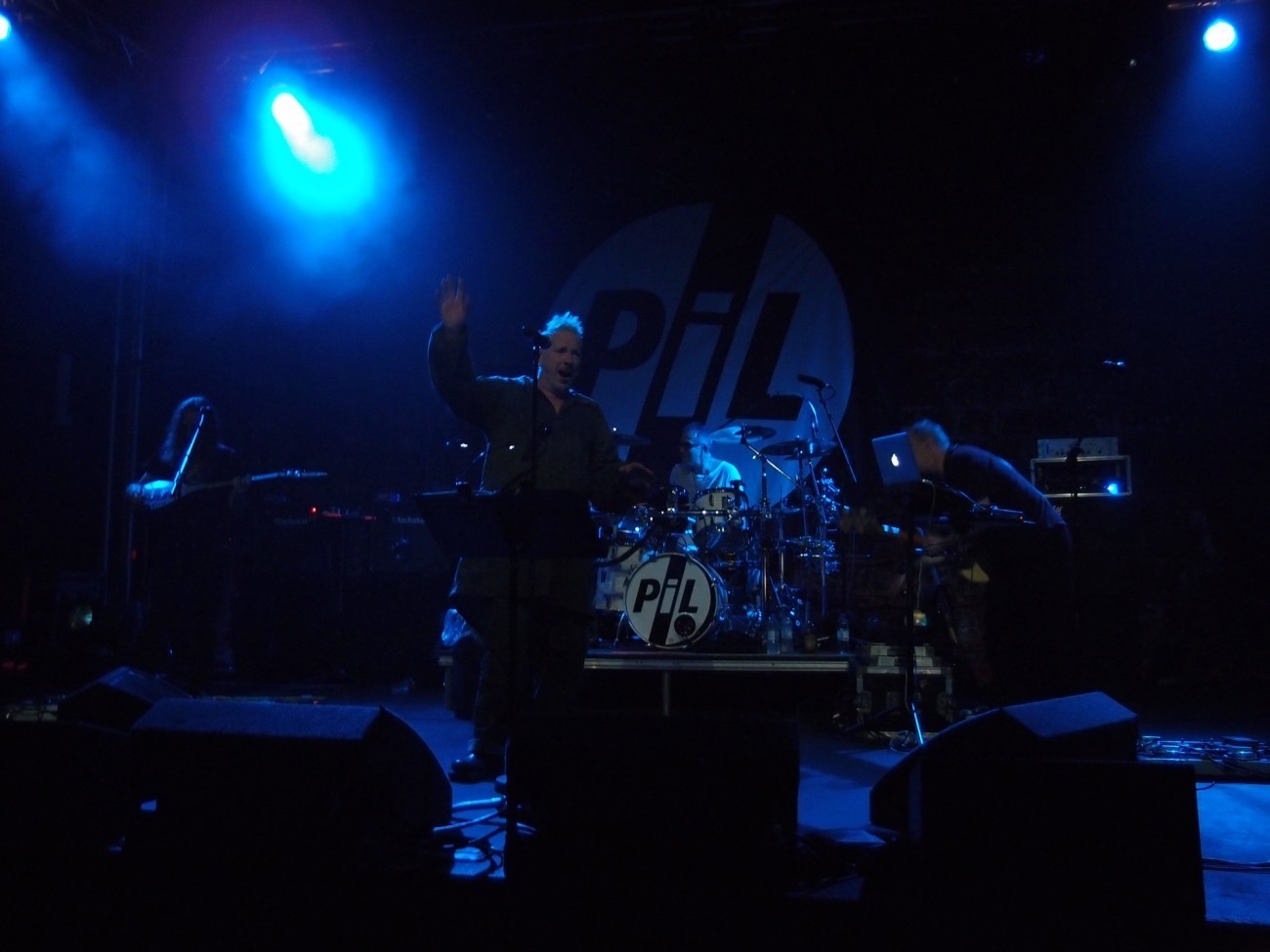 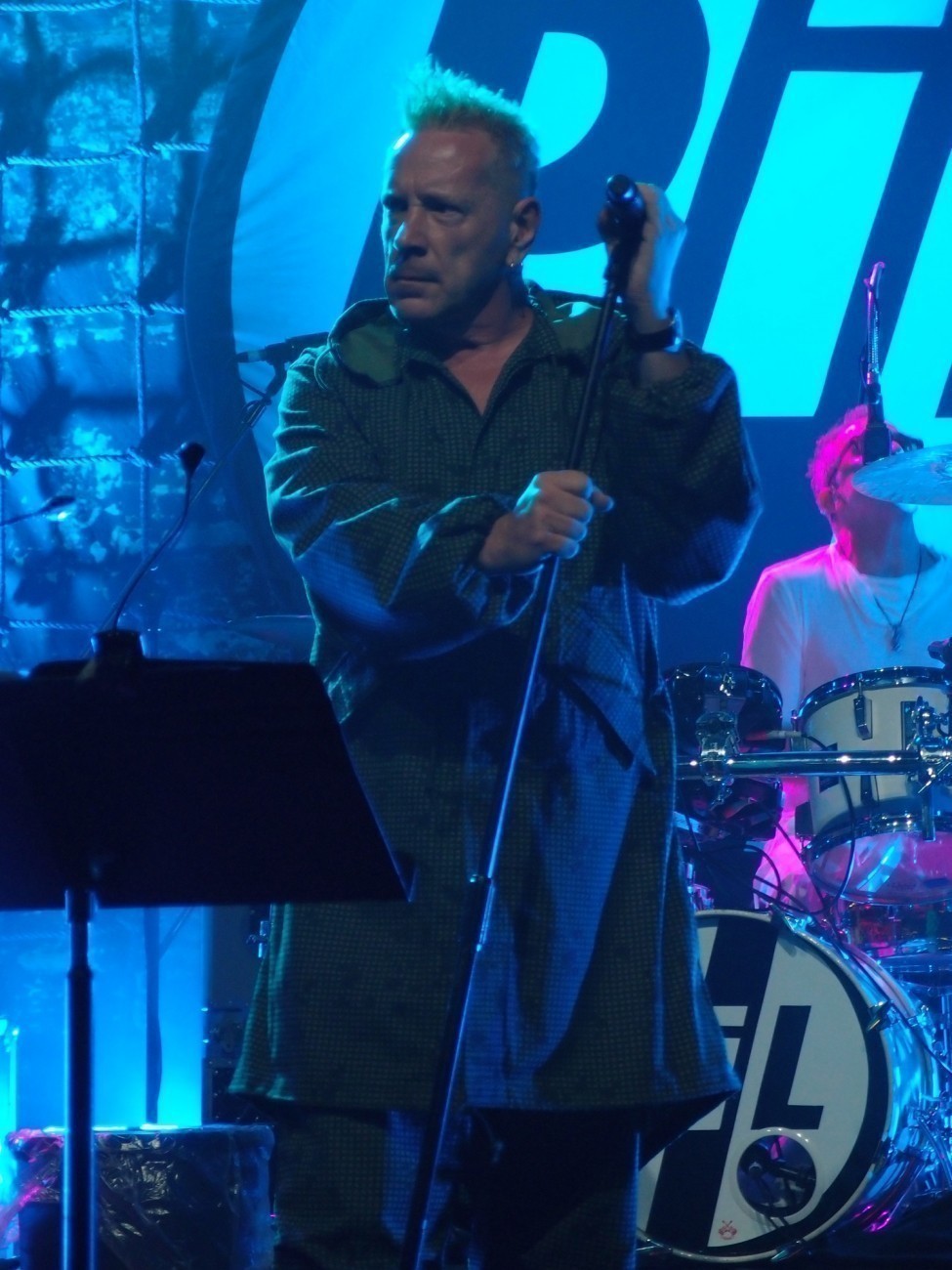 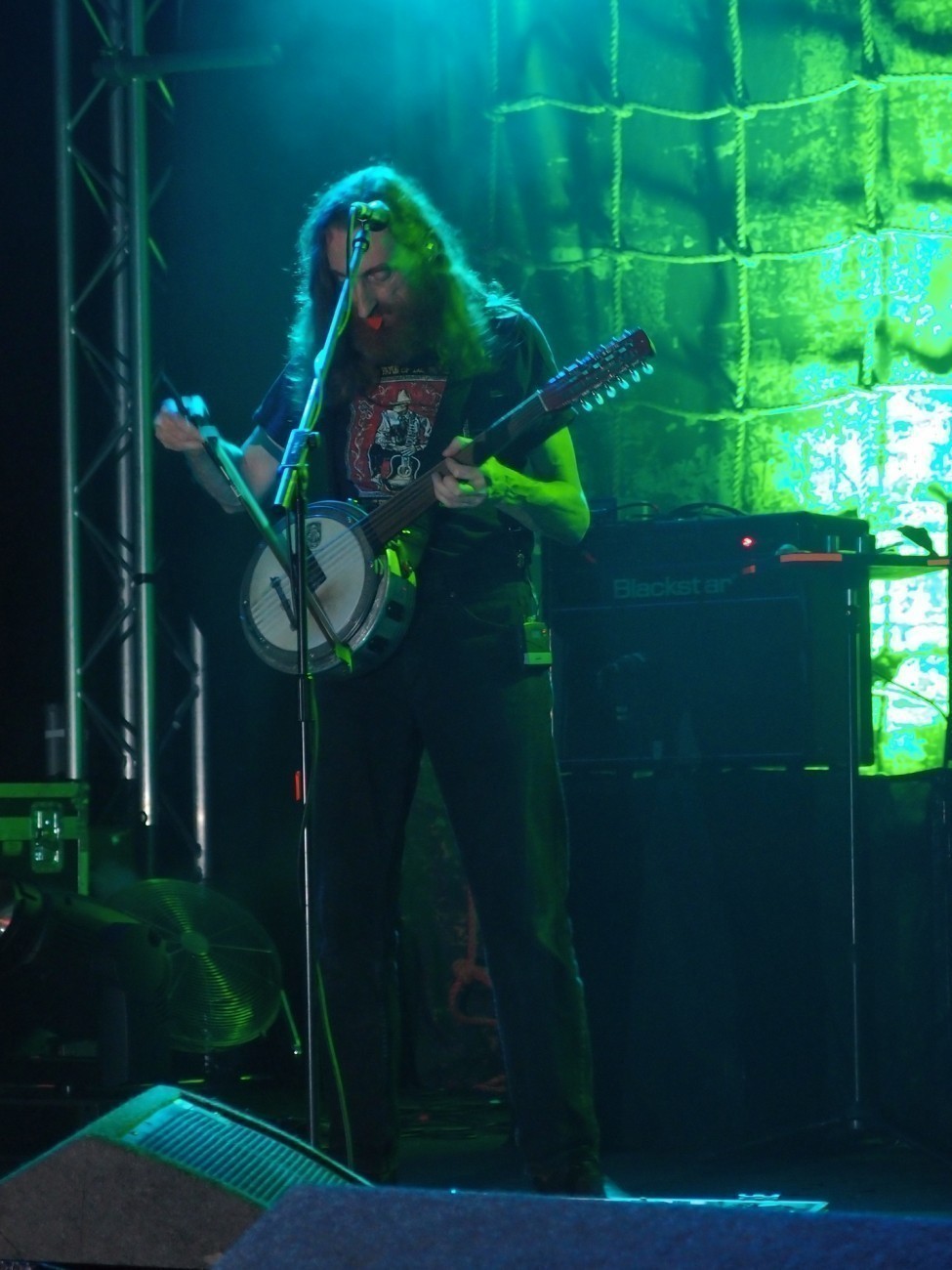 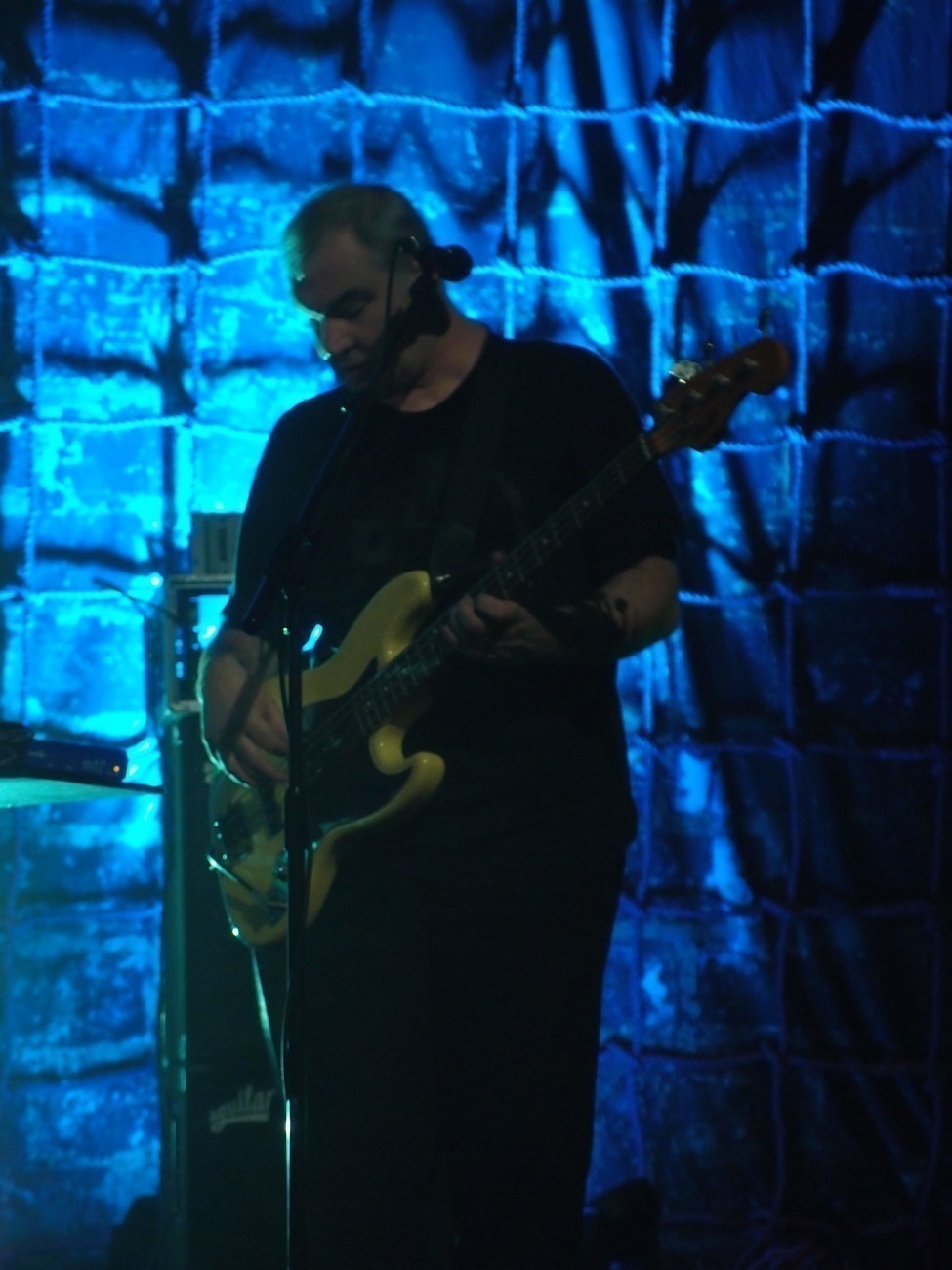 That is some SERIOUSLY low light. One just can't expect to get perfect frozen, clean shots in light like that with a small sensor camera. Mr. Lydon is looking good for his age (and he still knows how to look suitably upset.....LOL). I'll enjoy the records.....live music is not my cup of tea.
I

Yeah, I know it's always going to push the camera to it's limit (and beyond). I'm just trying to get the best out of it I can.

Jonnie was indeed on top form, as were the entire band. The new album, This Is PiL, is excelent. Definitely PiL, but definitely not just churning out the same old stuff.