Panasonic has leaked the specifications of several cameras on their support website. Amongst them is the new LX5, which will be available in black and white. Here are the specs, directly screen captured from the Panasonic page: 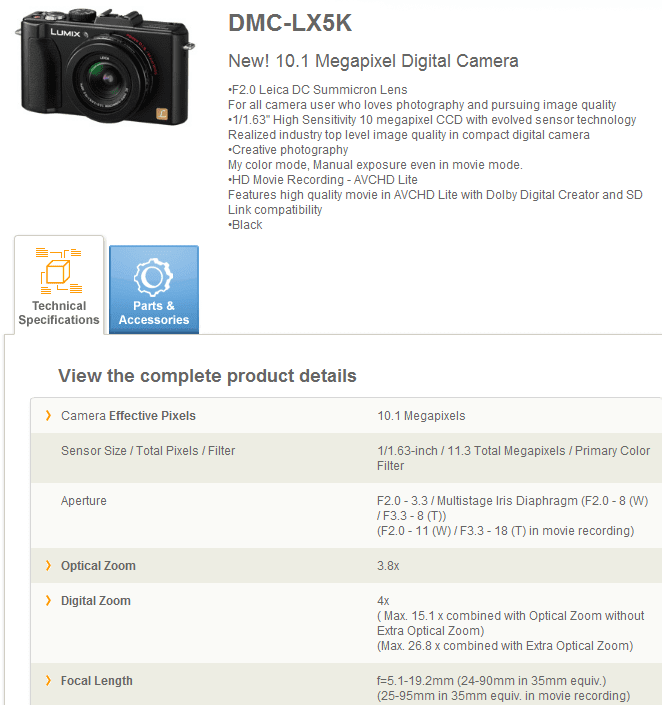 The big news is a new 24-90mm equivalent f/2.0-3.3 zoom. Other items of interest are that an optional EVF will be available for the LX3, and the max shutter speed has been improved to 1/4000s.

They have kept the sensor at 10MP and multi-aspect ratio, similar (? same) to the sensor from the LX3. See this article for an explanation of the implementation of mult-aspect ratio in the LX3 sensor: https://www.photographerslounge.org...e-effective-sensor-area-per-aspect-ratio-149/
D

Guess this one isn't with the 4/3 after all. Looks like a tad longer and slower on the tele end. Probably a winner.

It will be interesting to see what if any real improvement has come to the sensor. In my experience, the LX3 sensor is competitive with the S90/G11 sensor, so I'm not expecting a major improvement with the LX5 sensor.

I've been reading and reading, but really it's all conjecture at this point. And then will Leica come out with their version soon, I wonder?

Very likely that they will.
J

If you don't own a LX3 then LX5 might be slightly more attractive, because of extended zoom at tele range and maintained aperature at widest angle.
- Very curious what other "significant" changes are made and if potential firmware updates will also become available for LX3

JoepLX3 said:
If you don't own a LX3 then LX5 might be slightly more attractive, because of extended zoom at tele range and maintained aperature at widest angle.
- Very curious what other "significant" changes are made and if potential firmware updates will also become available for LX3

For real portrait applications this is still not sufficient (probably technically (optics) impossible to combine in one lens and maintain compactness of total body)
Click to expand...


Don't see it replacing my LX3 .. great first time buy tho'
U

It's certainly not a compelling case to upgrade from the LX3, but I think the few changes they did make were smart ones. Extending the tele end a bit will be quite useful and should help it compete with the G11. Hopefully it doesn't compromise the 24mm side. If the sensor is more capable and demonstrates more low-light ability, that alone might be a compelling reason to trade up.

The rumors of the M4/3 sensor LX5 really never made any sense. It would have made a camera that cannibalized the GF line. The more I use my M4/3, the more I realize I want something closer to my LX3 with a larger sensor. A smaller, more affordable version of the X1 with a fixed lens (tele or prime), a more competent execution of the DP series, or an LX3 type tele lens with a larger sensor. That I think is what I'm really after. I would also be open to something a bit smaller than the GF series with interchangeable pancakes. The inherent quandries involved in getting there make you appreciate the thinking behind the GX series---swapping out the sensor and lens at the same time for maximum effectiveness.
A

I have to agree. More competent large sensor fixed focal length compacts. I think the Ricoh GXR A12s are the best bet right now. Would like to see others too. I think large sensor zoom compacts are more difficult to pull off.
J