Here's one of mine to get started, taken with a G10 at Centennial Park in Ellicott City, MD: 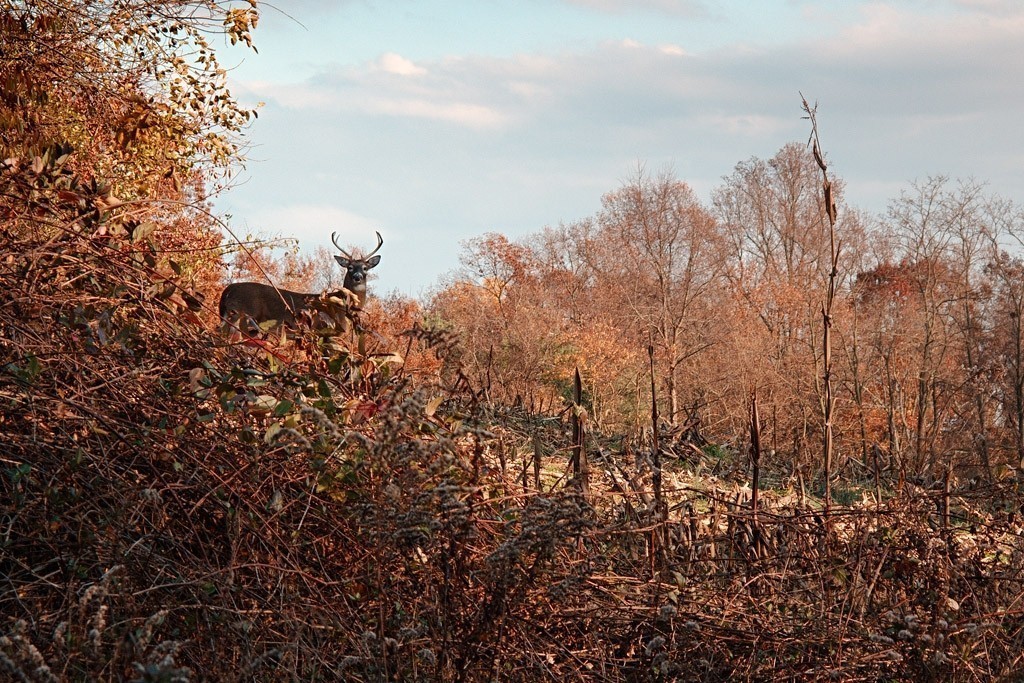 'Made for each other'. A Spotted Owlet with the moon at Central Park, Jaipur, India. Canon PowerShot G9.

One more: A Pond Skater or Water Strider photographed from a boat at Keoladeo Ghana National Park in India. Canon PowerShot G9.

Wow, is right - to all three of these photographs on their own merits!

Amin, what amazing good fortune to come upon handsome buck! The first thing I thought of when I saw that was the movie The Deer Hunter. Really, how can one not admire such a regal looking animal. Was it a total surprise for you to look up and see him gazing at you? I probably would have just stood there with my mouth open!

Maynak, that is an incredible photograph of a Water Strider! I must add that they grow them much, much larger in your country, than ours...or at least the versions I have seen her in the northeastern USA. You captured a lovely combination there - the soft, almost tactile water and your strider's crisp, clean lines. However, I have to say I am in love with "Made for each other" - wow is an understatement. Your Spotted Owl and his mate are pure simplicity and perfection.
M

Wonderful description of Amin's image! True it's very much like a painting.

Aha, well your strider's are still bigger than the one's I've seen, and I'm quite happy about that since I was swimming with them.

My name is actually BB. Well, it's a nickname but that's a long story for another time and place.

Thanks, Mayank and BB. BB, I did sort of freeze when I saw him. Then I ran to my wife to get the camera, and to my amazement, he hadn't moved an inch when I got back. I remember wishing at the time that the G10 had the reach of the G9.

Mayank, I love 'Made for each other'. Really lovely composition.

Great story, he must have known you didn't mean him any harm.

Yes, I have to reiterate that "Made for each other" is a winner.

Toward the end of a concert by Teresa Christina, when things were calming down. Note that the last remaining dancers become ghosts.

I tried "correcting" the white balance, then undid the change. The lighting was red, so that's what colors felt like at the tim.

This photo fails all technical considerations of a "good photo". Not only the color balance, but also highlight clipping in the bar area and the loss of detail in the dark areas in a large proportion of the image. Clearly, I would have gotten a technically better image with a large sensor. I would not have been carrying a large-sensor camera, however, so I would have missed the shot.

A couple more from the same night. This one shows more clearly that the color indoors was intentionally reddish. It also gives a sense of the really beautiful location for this wonderful concert/bar/dance spot.

And this final one is of the stage before the performance. Here you can see how they were playing with light colors that night.

Lovely atmosphere caught on camera in the first image, José. The clipped highlights adds to the image, imho.
A

The Canon G7 is a fine camera that was a companion to my Zeiss Ikon and Canon 30D for some time. I didn't like it at first, but after I got used to how it worked, I carried it everywhere and took many fun images with it. I even took it to China for ten days and left the 30D at home, and given the amount of walking I did, I'm glad. Under many circumstances, the Canon G's like the G7 and G10 do just as well as a DSLR. Low light or shallow depth of field aren't their bags, but they are very versatile cameras nonetheless.

I snapped this on one of my regular photowalks through Melbourne's CBD. This is a view from Princess Bridge, which crosses the Yarra River, just south of the city centre. 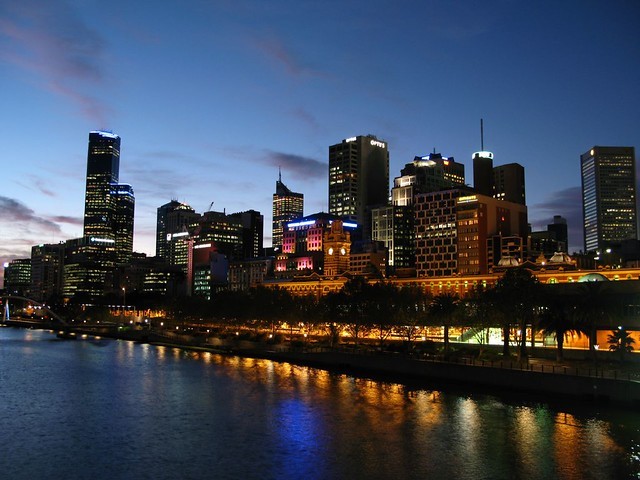 The following image is of a lifesize statue by Bruno Torfs, modeled after the famous painting of the Lady of Shalott by Waterhouse. This statue was destroyed in a massive bushfire that ravaged the area, but one year after, I returned to see that it had been rebuilt. 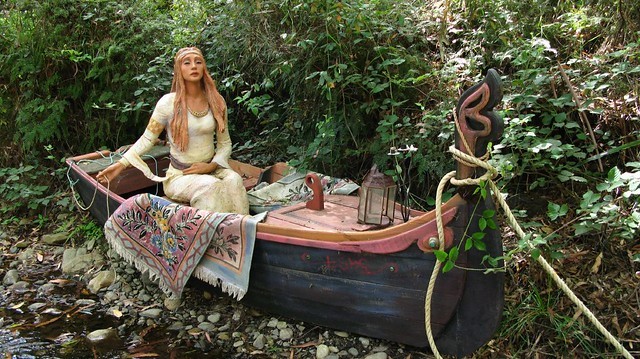 The 6x zoom of the G7, coupled with a 35mm eq. wide angle, gives it a pretty versatile range. I especially like the G7's zoom for concerts and travel. This was taken in China, at the Shaolin Temple. The girls were standing on a very high stage that was on top of a high stone wall. Behind the wall, I saw dozens of these girls training by doing handstands for minutes at a time, feet supported by the wall. 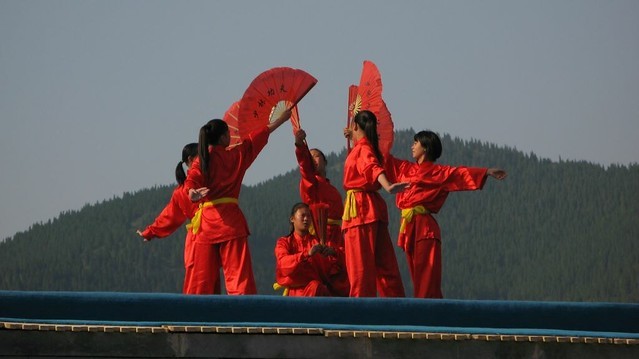 Thanks Amin for sharing this great shot with us.
The G10 has an optical viewfinder. Is the effect of zooming visible (how) in the OVF ?
Or is OVF meant for mainly use in bright light (sunshine) ?

Have a nice day, Herman
R

Thanks for the photo! (Toward the end of a concert by Teresa Christina)

Personally I do believe that, regard the technical aspects of not to be a “good photo”, it is a superb picture, because it puts down the atmosphere of that moment, and that is what I think, makes this a great photo!

The praying mantis looks like the ultimate stealth weapon. 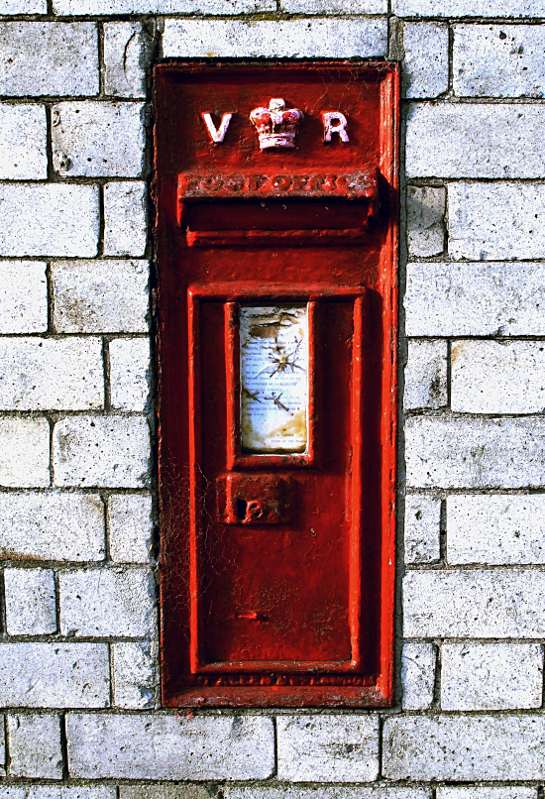