This is as psyched as I have been about a camera announcement in a long time. 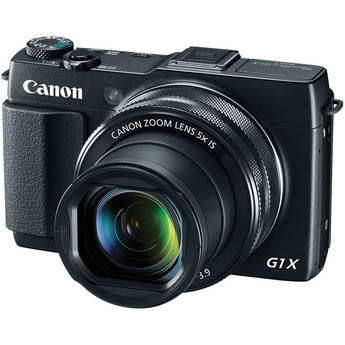 
With a sensor size a touch bigger than 4/3, multi-aspect ratio, decent "macro-ish" capability, and 5X relatively fast zoom in a pocketable form factor, this may be my new "desert-island" camera.

Amin Sabet said:
With a sensor size a touch bigger than 4/3, multi-aspect ratio, decent "macro-ish" capability, and 5X relatively fast zoom in a pocketable form factor, this may be my new "desert-island" camera.
Click to expand...

If I'm on a deserted island, I won't be too concerned with pocketability.

If AF is decent in speed and accuracy, this could be a very interesting "almost all in one solution". Imo preferrable over mft with expensive 12-35 or 12-40mm constant f2.8 zooms.

Yeah, this looks good, now that some of the specifics are known. The two rings on the front and (it appears) one on the back means there should be plenty of control. I love multi-aspect sensors, but I"m a bit confused - do you have to be using 3:2 to get the 24mm equivalent wide end and 4:3 to get the 120mm at the long end? Or is the whole sweep available in both aspects?

This camera starts to realize the potential of the RX100, but in fact it's starting to realize the potential of the original G1X. I honestly didn't think Canon was the one that was gonna come up with this camera, or that it would happen with this large a sensor. Depending on controls, this is almost exactly what I was hoping someone would do with the 1" Sony sensor, but I'll more than take it with a larger than 4:3 sensor. That excellent sensor (at least based on what Nic always did with it) with an f2 wide and and still reasonable f3.9 long with this wider focal range could be a great all-in-one for a lot of stuff. I'm inclined to say I won't buy one because whenever I think I'm gonna use one of these all-in-one cams, I end up NOT using it. Then again, I've never had one with nearly this good a sensor. If the lens is as good as the one in the initial G1X. Could conceivably replace the Olympus 12-40 lens, if nothing else. But I seriously doubt the controls will be such to allow it to replace the Nikon A as my pocketable / street camera. So I may not have a place for it, but I'm still VERY encouraged by the announcement and look forward to the details. And seeing how good the EVF will be...

The links show end of April availability so there should be some reviews before that. This is the camera people were asking from Sony btw RX1 and RX100, not the current Sony RX10... Canon made it right this time. Sensor dynamic range might be btw old m43 and new m43 based on recent Canon sensors but the high iso should be good. Comparable lenses are much bigger or pancakes w/ slower aperture w/ less range eg Panasonic 12-32 or Sony 16-50.

Some keys:
Claims ISO 1600 has as little noise as ISO400 on the G1X (my guess is in jpg)
9 bladed aperture
inside ring is stepped -- can set it for e.g. aperture (would prefer it to set the zoom ala RX100)
outside ring is smooth -- for e.g. MF (includes an MF distance scale on the LCD)
touch screen (as has been reported)

Always fearful Canon will mess it up somehow, but it seems pretty sweet on paper.

Nice to have C1 and C2 on the mode dial.

Q: can you tilt the flash back to bounce off the ceiling?

Bonus: looks far more attractive than the G1X did, even if you add the EVF.

wt21 said:
...
Always fearful Canon will mess it up somehow, but it seems pretty sweet on paper...
Click to expand...

Good to see you Bill. Your point here cannot be overlooked. What might they have done that we are not seeing in the specs?

This does look like a great camera. The dual control rings around the lens barrel are particularly nice. But, in watching that YouTube video, the Mark II still doesn't seem any smaller than my E-PM2 (or compare with the E-PL5 if you want to include more external controls and a tilting LCD). And the EVF looks about as big as Oly's VF-2, which is not tiny. If one isn't already into micro four thirds, this new Canon looks like a great option. If one already has micro four-thirds gear, two things come to mind: The occasional rumors of a micro four-thirds comapct with a permanent lens and Pansonic's GM series, which many believe won't be limited to only the GM1.
N


Ray Sachs;170656 but I"m a bit confused - do you have to be using 3:2 to get the 24mm equivalent wide end and 4:3 to get the 120mm at the long end? Or is the whole sweep available in both aspects? [/QUOTE said:
The equivalent field of view is calculated diagonally, so a 4:3 ratio at 24mm would have slightly less horizontally in-view than 3:2 (but more vertically). This is the same for my Panasonic LX-7, which when set to 16:9 at its widest end, has a wider horizontal FOV than a full frame 24mm lens.

At the long end, the same applies. When 3:2, more horizontally in view than 4:3, but less vertically.

However, for 1:1 (square), these cameras usually just crop pixels off of the 4:3 image. The image circle isn't maximized -- which is a bummer.
Click to expand...

I think that you can only really judge this camera relative to any others based on the lens. If Olympus or Panasonic were to announce a 12-60mm f2-4 Micro 4/3 zoom lens for $800 there would likely be something of a frenzy even if it was say, 100mm long. Well Canon just did the same thing in the form of a pancake lens attached to a free camera. The G1X Mk II is the new poster child for what you do with the size and specifications of a lens when you fix it to the body and allow it to collapse inside rather than attach it to the mount of an ILC. Sure it might be possible to go smaller with something like a GM1 or E-PM2 with one of the pancake zooms but there is a limit to how small you can go before ergonomics suffer, smaller camera bodies have less physical controls, and the specs on the lenses fall well short, and this was even true (but to a lesser extent) when comparing them to the lens on the first G1X.

Where it won't match an ILC is the ability to change lenses for something different, but you make the choice going to with your eyes open and ILCs will always exist on a different level based on that fact alone.

Luckypenguin said:
If Olympus or Panasonic were to announce a 12-60mm f2-4 Micro 4/3 zoom lens for $800 there would likely be something of a frenzy even if it was say, 100mm long. Well Canon just did the same thing in the form of a pancake lens attached to a free camera.
Click to expand...

Now that I think about it, the technology of this camera is quite remarkable when compared with its contemporaries. It has a brighter, faster zoom lens than the Leica X Vario with a sensor that is only a bit smaller, and the lens itself is a quarter of the size when collapsed. It has a larger sensor than a similarly sized Panasonic or Olympus m43 camera, and the lens is far brighter and with longer zoom than anything m43 has to offer.

Having said that, I wonder about the quality of the lens, and how much distortion is being rectified in-camera. Tests with the G1X show a noticeable degree of barrel distortion that is corrected by the camera, whereas the Panasonic 12-35mm f2.8 has less.

The Mk I G1X has an enormous amount of distortion at it's widest focal length, but once corrected you'd never lament that the camera can't take a sharp image at wide angles excepting the very corners, but softer corners hardly makes the camera unqiue amongst it's peers. The sharpness of the lens was in fact one of the G1X's greatest strengths. Please let the lens in the Mk II be the same.

You can see the size of the lens compared to X100:

If you check the Canon.jp link above, the flash can sync up to 1/4000sec. It has 5 axis IS during video. Also it has built-in nd filter and intervalometer.

So the gains in lens speed are mostly from the normal to telephoto focal lengths.

The more I think about this camera, the more I like it. Wow, I can't believe I said that about a Canon.

Armanius said:
The more I think about this camera, the more I like it. Wow, I can't believe I said that about a Canon.

I'd actually be happier with that lens Jack. You got my vote.

Keep in mind that the sensor in the G1xmk2 is closer to m4/3s size than APS-C.