The Canon Powershot G1X represents a new class of camera. It is the first relatively compact (coat pocketable) camera with a large (greater than 1") sensor and a fixed (non-interchangeable) zoom lens. At the same time, the G1X is very much an incremental evolutionary step from the Canon Powershot G cameras which preceded it. Other than the sensor and a new lens to match, very little has changed between the Powershot G12 and the G1X. This is not surprising given that the Canon Powershot G series cameras have been incredibly successful from the beginning, competing strongly against other advanced compact zoom cameras such as the Panasonic LX/Leica D-LUX series, Ricoh GX, and newcomers such as the Olympus XZ1, Samsung EX1/TL500, and Fuji X10.

If you have not yet done so, please check out our hands-on video, which demonstrates the basic form and functionality of the Canon G1X. To see how the G1X size compares to other cameras including the Powershot G 12, I recommend the website CameraSize.com.

In the hand, the G1X is slightly more chunky than other Powershot G cameras. It is very comfortable to hold, and the grip as well as the thumb rest fall naturally to the hand. It is one of the few cameras in this class which is relatively easy to use while wearing thin gloves. The power zoom allows smooth zooming while doing video, but I greatly prefer the mechanically-linked zoom of the Fuji X10 to the power zoom of the G1X.The top panel of the G1X no longer features an ISO dial, in contrast to prior Powershot G cameras. This reorganization seems in part due to the presence of a new pop-up flash, requiring the exposure compensation dial to be moved to the dial surrounding the mode dial, previously the position of the ISO dial. The exposure compensation dial now features one third stop clicks rather than have to stop clicks as previous. 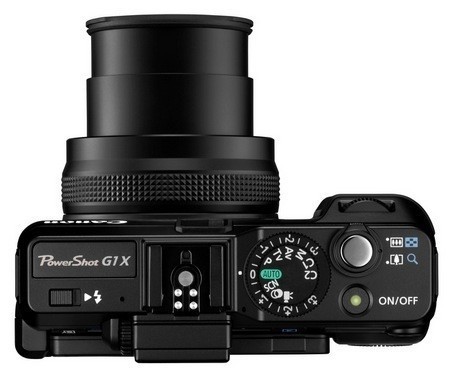 The overall build quality of the Canon G1X seems very solid aside from a somewhat flimsy feeling battery door. Like G12, the G1X has both front and rear control dials. The front control dial is excellent, perfectly positioned for use with a firm clicking action, while the rear panel dial turns more freely. The mode and exposure compensation dials are well executed.

The G1X, like prior Powershot G cameras, features a fully articulated (flip/twist) LCD screen, which is large, high-resolution and reasonably viewable in sunlight. There are no touchscreen controls. I personally prefer a flip screen such as the one on Sony NEX cameras to be fully articulated type. However, the latter is very useful for video as well as self-portrait. Menus are typical Canon, logical and easy to navigate. If there is one limitation of the G1X which would prevent me from buying this camera, it is the autofocus speed, which is similar to the autofocus speed on prior Powershot G cameras and significantly slower than Sony, Olympus, Panasonic, Nikon, and Samsung compact system cameras. Shutter lag, too, is an issue. From half-press to full-press, there is virtually no lag. However, when manually focused with manual exposure, the no-press to full-press lag is considerably longer with this camera than with most other cameras in current production.

Battery life was average. I got just over 200 shots per charge.

The Canon G1X has a sensor size in between 4/3 and Canon APS C. When compared to a small sensor cameras such as the Fuji X10, the Canon sensor is greater than four times larger. However, in order to keep the body size compact, the lens is a full stop slower than the Fuji X10 lens at the wide-angle end of the range and slightly more than two stops slower than the Fuji at the telephoto end. Both cameras feature a 28 to 112 mm equivalent angle of view. In the case of the Canon, that corresponds to a 15.1-60.4mm f/2.8-5.8 lens, whereas the Fuji uses a 7.1-28.4mm f/2.0-2.8 zoom lens. Download RAW file: LINK​
The combination of a much larger sensor and a much slower lens for the most part leads to fairly equal image quality in low light, shutter speed-limited photography. The X10, while both smaller and lighter, competes well with the G1X for low light, handheld results. In fact, the G1X proved to be the more frustrating of the two because the Canon auto ISO tops out at ISO 1600, forcing me to manually set the ISO when the slow lens required me to go well above that limit. That said the G1X features class-leading image stabilization.

Below are two sample ISO 6400 images of my sons taken with a Canon G1X. These were taken with sunlight coming through the window and are "exposed to the right", so not a worst-case scenario by any stretch. However, shutter speed was only 1/30s and 1/40s respectively, so there was not a great deal of light. The image stabilization allowed me to consistently handhold steady at full tele (112mm equivalent) and 1/30s. Whether the boys would hold still for that long is another matter! Download RAW file: LINK​
The Canon G1X lens is truly excellent. It has sharpness comparable to the best CSC kit lenses, a greater focal length range than any compact CSC kit lens, and smaller size than any CSC zoom lens other than the similarly sized Panasonic Lumix X 14-42 Power Zoom. The relatively small size of the G1X lens is accomplished through a powered collapsible design and the incorporation of a lot of barrel distortion, which is corrected in software. As with other recent cameras which use software correction of distortion, this barrel distortion is invisible to the end user unless you use an unusual RAW processor that doesn't support the automatic correction.

Sample crops are shown below. Bottom line: Throughout the zoom range, the G1X lens is sharp in the center wide open and very good at the edge of the frame when stopped down one stop from wide open. Extreme corners are reasonably sharp by f/4 at the 28 mm equivalent setting. Download RAW file: LINK​
Lens bokeh (out of focus rendering) is pleasing. You won't see much out of focus because the lens is slow, the MFD is great, and the sensor is not particularly large. The ability to limit shallow DOF with the G1X is very similar to that of fast, small-sensor cameras like the Fuji X10, Samsung TL500/EX1, and Olympus XZ1 (except that those cameras have a shorter MFD). Here are a couple examples of the bokeh you get with this lens wide open at full tele: Download RAW file: LINK​
Dynamic range of the G1X sensor is similar to that of high-end small sensor cameras like the G12 and X10, as well as the Panasonic G3 and GX1, well short of the latest Sony APS-C and 35mm format sensors in this regard.

In order to demonstrate the dynamic range of the sensors, I developed the "bear in a box" set up shown below. With both the Fuji X. 10 and Canon G1X at their base ISO, I obtained a single broad exposure from each camera with a matched highlight clipping. Below, you can see 100% crops of the highlight recovery at -4 EV. Given matched highlight clipping, I then pushed the same files to +4 EV to extract as much shadow detail as possible, shown below. As you can see, both cameras produce equally noisy shadows, with little recoverable detail. If anything, I'd give the edge to the X10 here, which lines up with DxOmark test results. While the DR of the G1X sensor is nothing to get excited about, it offers greater tonal range and color sensitivity than any small sensor camera. What this means is that within the available DR, there are a greater number of discernible tones/colors. As a result, the images are more malleable, holding up better during postprocessing. Click the link below select images in this review to download the corresponding RAW file. Final word: The Canon Powershot G1X is an excellent camera. I have long been a fan of the Powershot G series as well as the old Powershot S series (S50, etc), and the G1X does justice to that tradition while breaking new ground with the larger sensor. I think it's only a matter of time before other companies follow suit and expect that a generation or two from now, we'll see 4/3 sensors in successors to the current Panasonic LX5 and Olympus XZ1.

The G1X 4X zoom lens is excellent. Coupled with a very good sensor, unusually effective image stabilization, proven controls, and a high quality articulated LCD, the G1X is a great choice for people who are willing to take their time to frame a composition and expect high quality results. However, autofocus speed that lags well behind current CSCs and size as well as price greater than most current small sensor cameras will limit the number of people who choose this camera.
T

The kids are growing up!
Nice work!
A lot of things to like about the camera except they lost me on the viewfinder. It took me a while but I've decided that I really do like having a viewfinder....and it must be usable
J

Great portraits of your sons, and very informative review.

Very nice review Main. I'm surprised by the IQ. Thought the sensor would be a tad better.

Thanks, Jason. Btw, I spell my name that way ("Main") pretty often when I'm trying to type fast!

Excellent review Amin! Likely, the best on the internet so far for the G1X. And excellent photos too! So now I know where you've been hiding lately. Looking forward to a XP1 review soon.
D

Auto correct! Doh! Sorry about that.

Thanks, all. Anyone think I can patent my bear in a box DR testing system and license it to DPReview? :tongue:

Oh yeah! Love the bear. More effective way to show DR than a sliding scale of the gray color!

love teh Bear!
Actually I rather like the G1X, your review here is very helpful
L

I saw my first G1X out in the wild yesterday while feeding the elephants.
J

A great review, Amin. Another compact capable of excellent results as shown by your thorough test results.