Compact System Camera Market Share Data for Japan in May 2011

According to BCN Ranking, which collects point of sale information to assess market share in Japan, nearly all off the top 10 interchangeable lens cameras in May were either small DSLRs or mirrorless cameras: 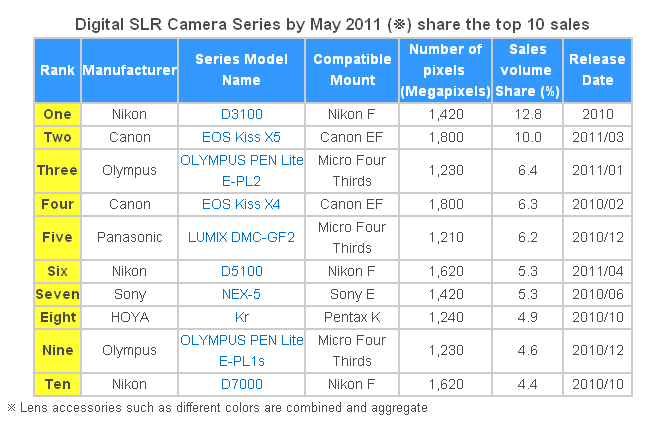 Makes sense that the entry level stuff sells best. Looks like the Sony SLT's aren't doing as hot over there as they are/were here in the US.

Armando, do you have a link to any similar data for the US?

Here's a link to overall percentage market share of digital camera sales in the US. No breakdown by model though.

Thanks for the info Amin. Great to see the little Pentax up there; she's such a beauty. I wouldn't have expected to see the GRD or DPs up there - as they are pretty niche but I would have thought that the x100 might have gotten a guernsey. Hmmm....

DSLR/Interchangable lens cameras only so the Ricoh, Sigma and Fuji aren't counted here.

Me and my uncanny ability to not read the fine print. It'll land me in hot water one day....I bumble through life on sheer luck.

Mark's confession for the day.

It's an old boy's club. If your lens is fixed, you're out!

Sony has largest share of FF market in Japan