Steve (@drd1135) kindly pointed out to me that it'd be a good idea to have a companion thread for talk and observations - he's right; it was missing in May, resulting in sometimes discussions entering the image threads. While that isn't necessarily a bad thing or completely discouraged, it can distract from the images - so here you go; let's "have words"* right here

*And yes, I know the common meaning of this colloquialism - I'm not encouraging heated debates, hence the quotations marks; just a tiny pun on one of the many charming idiosyncrasies of this language I love.

I don't know where to voice my support for all of you "photo warriors". But I salute anyone that commit to any sort of schedule in these times. I can barely keep from throwing myself off a bridge....and some of you are taking photos every day?!?! I follow you with enthusiasm. If I believed in a god, I'd ask Him to grant you strength.

It's the easiest part of the day to pick up my camera.
There are so many living hellish lives right now with our so-called leaders doing nothing but making things worse.
I am far more happy to share with you the fact that I spent some time today making art rather than the hours I spent at a range practicing my handgun skills in case I have to defend my adopted son because of the evil lies being spewed by a so-called president about "Chinese" and Covid.

This was the first day of first grade. A Kiev 4 and a Jupiter 8 IIRC and cheap Fuji film because their color balance handles Asian skin tone more accurately than Kodak ever has. 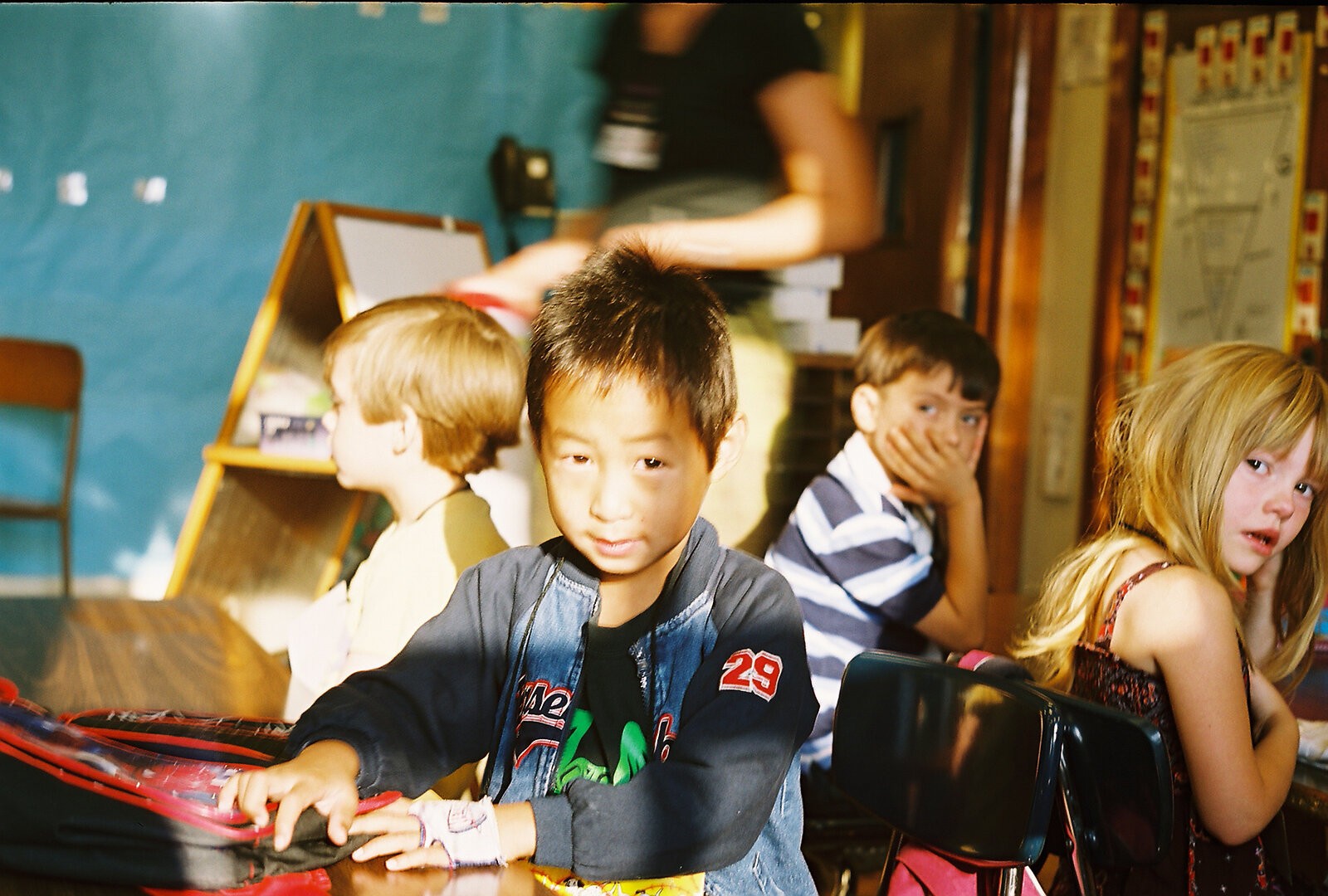 Sorry for the politics. Not sorry for living for tomorrow.

@Luke, @Tim Williams I feel for you guys - and thanks for letting us in on all the anguish and misery the social upheavals in your otherwise amazing country cause. We Central Europeans have often looked at the U.S. with disbelief and dismay in the last fifty or so years (you have to remember that I'm a historian); what it must feel like to actually live there in these especially trying times is hard to fathom. I appreciate it all the more to have so many of you keep us such good company. Civility and empathy are things we all have to re-learn and practice as much as possible - thanks for providing us with such strong incentives to that end.

For me, photography has always been an outlet of my visual creativity (I'm dismally bad at drawing and painting), and now it's a pillar of sanity as well. It's what I do to keep my wits about me ... However, to be honest, that pillar is nothing but a crutch at times - as much as we sympathise with each other in general, in many particular cases, it appears as if society had forgotten about so many needs and necessities the new online craze can't take care of.

We learned less than a week ago that we won't be allowed to see our students again this term. The young people are taking it very, very badly because they've, for the most part, tried to stick to the rules in order to make the lockdown pass as quickly as possible and set all their hopes on June. Now the country is opening up (very, maybe dangerously, quickly), but secondary schools have to remain closed. The only thing the students may enter the school grounds for is - tests; they're actually forbidden from turning up at all otherwise. This is so depressing - if there's one thing we don't need now, it's additional pressure and stress, yet that's the only thing we're allowed to create and carry out. I've already thought of how to remedy that impossibly aggravating situation for my class, but the fact that I need to do this on my own, private iniative is outrageous. Has anyone thought about the kids at all? What of their mental health, their happiness that they're entitled to and need much more of than we hardened old fools (I'm joking, feeling miserable ...)? They're not yet as disillusioned and cynical as we are, that's for sure - however, we're apparently doing everything to make them reach that state as fast as possible. Why do we in education not actively look for better solutions? Why do we, the general public, not change our behaviour to make us all safer? Why do we all not pour all our resources into doing the right things instead of the simple and obvious? Selfishness has always been short-sighted, but at the moment, it seems to turn everyone blind, deaf and dumb. Back to "normal"? I so hope not ... We can't afford to stay on the route we've taken a lot longer ...

Okay, I'll knock off the sombre tones now - because whatever's eating me, is eating us, it won't help us survive and making things better, gradually, slowly, but we have to try.

In the meantime, let's give each other some reason for joy by sharing - just images, but images at least ... Windows of opportunity, so to speak. Let's keep them open ...

Luke said:
I don't know where to voice my support for all of you "photo warriors". But I salute anyone that commit to any sort of schedule in these times. I can barely keep from throwing myself off a bridge....and some of you are taking photos every day?!?! I follow you with enthusiasm. If I believed in a god, I'd ask Him to grant you strength.
Click to expand...

Being able to go out and photograph keeps me away from bridges. You won't want to be near me if I haven't been going outside during the day.

Luke said:
I don't know where to voice my support for all of you "photo warriors". But I salute anyone that commit to any sort of schedule in these times. I can barely keep from throwing myself off a bridge....and some of you are taking photos every day?!?! I follow you with enthusiasm. If I believed in a god, I'd ask Him to grant you strength.
Click to expand...

Every day when I watch the news I can feel with you and I'm glad I'm living in a country where the government has a majority of responsible people and where everyone enjoys a relatively good health system. In these times we need all those achievements democratic systems and humanism have brought us in the last century. And gratefully I'm surrounded by mostly sensible persons, the anti-social / asocial egomaniacs are to be found in all societies, but they are a minority.

And I'm grateful for being in relatively good health, being able to live in relative prosperity, not having to suffer from natural catastrophies, wars or social upheavals. So being locked in because of such conditions is a rare benefit, especially if one has the leisure to read, take photos and listen to or play music, to build musical instruments or indulge in any other kind of creative work. And even if work is a bit more complicated for a lot of people at the moment, having no job or being too sick to work would be worse. We must be careful not to see things in a too pessimistic way. We'll get out of it.

Enough things to enjoy and no need for any bridges. Living life with more awareness at every single moment and enjoying it as much as possible.
This is a rare priviledge.

If you folks see me taking lots of bridge pictures, feel free to intervene.

It's a very strange time all round at the moment...

On day 4, I posted the top shot. The shot below it is uncorrected. You can really see the distortion in the Sigma 45 is you look at the line of the coat hooks. I updated ACR and it included the correction for the lens but I still tweaked a bit more by hand. There was some discussion about the Sigma 45 because they left a considerable spherical distortion in the design because they liked the way it rendered the OoF details. I thought I would show it here because it's so clear to see. Besides, you folks are the only ones I know that might have some interest in this.

This was also the shot where I noticed my sensor was dirty, since the lens was accidentally set on f/18. 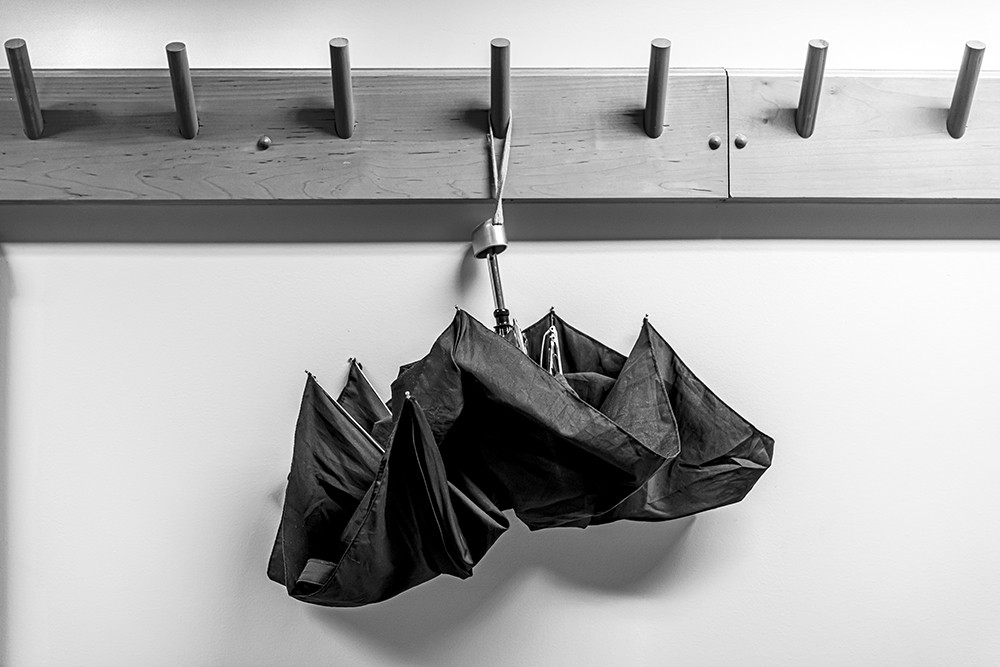 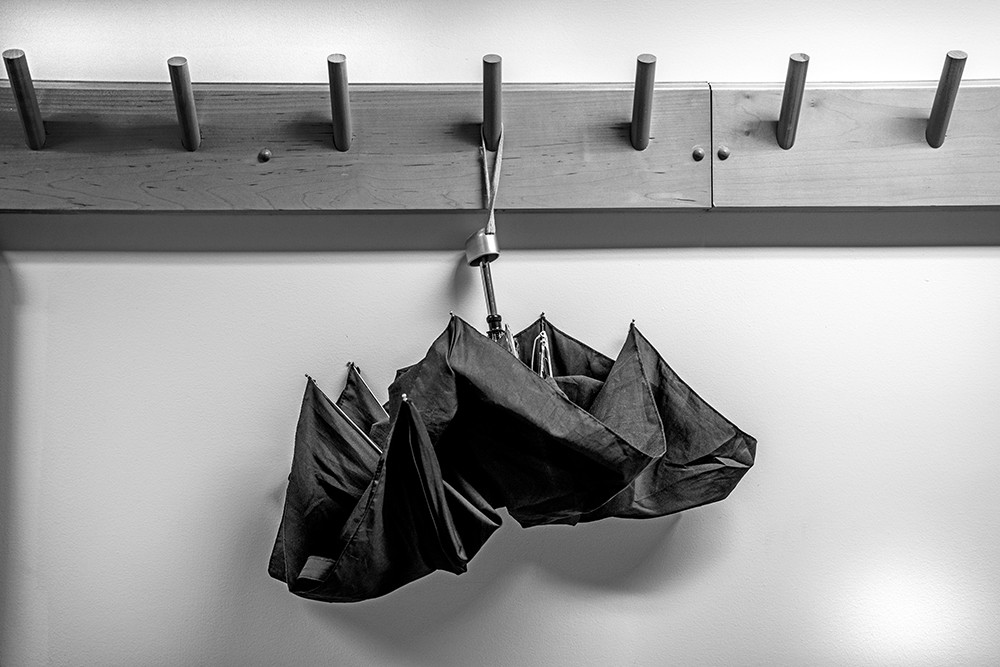 From time to time I may miss a day. I am still having low back appts. twice a week. I'm slowly getting better but every once in a while I have a bad day. Sorry guys

Tim Williams said:
From time to time I may miss a day. I am still having low back appts. twice a week. I'm slowly getting better but every once in a while I have a bad day. Sorry guys
Click to expand...

There's no problem at all with this. We all can only try to post daily. I like these threads because they provide incentives not requirements. Artistic outlets are important in these "interesting" times.

Failed the challenge yesterday, for the first time in over two months of daily challenges. On the last day of our mini-holiday we made a little walk before returning home but the camera stayed in the bag, and for the rest of the day I left it at that. Better have no photo than a bland and uninspired picture.

I have - obviously - given up on things for now. I haven't wanted to take daily photos thus far in June, and I'm not forcing myself to. I have made some photos, such as shooting a couple rolls of B&W film last week, but the daily practice just isn't speaking to me right now. Not in a funk, in fact I think I'm going to pick up writing about photography again soon, I've been mulling over some more topics in my head. I miss the comradery of the challenge, however!

It's been fun, and I've enjoyed the comradery and seeing other images that you folks come up with. I have sat out past challenges when I was uninspired and really didn't want to be bothered, but at present I am certainly not at a loss for source material.

I missed last month because in was in a photography slump. The comradery is one of the best parts of the challenges.

My enthusiasm got trapped under a spent dandelion in a place where only dark clouds exist. It needs some sunshine to sneak in and set it free.

I am really impressed that you guys are still going strong. Keep up the good work.

Taking photos each day helps me keep my thoughts from too much negativity, as so much conflict and derision surrounds.
Really enjoy all who post each day. And those who post as they are able. Checking in here daily is also a positive highlight!

Another thanks to Matt @MoonMind is in order now for moderating three challenges in a row. Having an incentive to come up with a photo each day certainly helped in me getting out to shoot. For those who continue with a daily challenge: all the best and just try to keep on shooting, no matter what. More than once I didn't feel like it at all, but still went out and invariably felt better after having done so.