In this part of the shootout, the ability of the DP1 to capture detail across the frame will be compared to that of the Canon 5D with EF 28mm f/2.8 lens and Olympus E-420 with ZD 14-42mm f/3.5-5.6. The particular lenses used here were chosen because they represent the most compact possible choices at the 28mm equivalent field of view for their respective systems. The results here may not be generalizable to the use of other lenses with these cameras. I recommend checking the lens evaluations at SLR Gear to see how the lenses used in this comparison perform compared to the larger and more expensive Canon and Olympus offerings.

Unfortunately, the absence of widespread support for the E-420 and DP1 RAW files necessitates the use of a different RAW converter for each of the three cameras in this comparison. Olympus Master and Sigma Photo Pro (SPP) are the only applications to support the E-420 and DP1 RAW files, respectively. I chose to use Phase One Capture One (C1) for the 5D file since this application does an excellent job of extracting detail from 5D RAW files. Ideally I would have liked to have used the same RAW conversion application for each of the three cameras.

The role of the AA filter, also called an optical low pass filter or blur filter, is worth mentioning here. The AA filter serves to blur high frequency information, reducing the occurrence of aliasing effects. The tradeoff for reduced aliasing is that the AA filter also reduces detail captured. Some of the perceived detail lost due to the AA filter can be made apparent again through the use of sharpening. Based on the published information, available test results, and my own experience, I believe that the 5D has a weak AA filter and the E-420 has a strong one. Thus the 5D requires just a bit of sharpening to regain the apparent sharpness lost to the AA filter, whereas the E-420 files require significantly more. Meanwhile, the DP1 lacks an AA filter altogether.

Some may feel that the "fairest" way to do this comparison is to leave the files as they come out of the RAW processor. I feel that this is suboptimal for two reasons. First, there is no reason to think that the three different RAW converters, at their respective default settings, are doing similar amounts of sharpening. Second, to sharpen all three files to the same extent handicaps the E-420 in particular since more sharpening is needed to get the best results out of that camera.

If you are interested in seeing them, the JPEG files prior to resizing can be downloaded below.

As is customary, the images were resized for comparison at the same output size. In this case, I chose to use Photoshop Bicubic Smoother to upscale the DP1 and E-420 files to the same diagonal pixel dimensions as the native 5D file, which was left as is. The choice of upscaling method was based primarily on the prevalence of Photoshop compared to the alternatives such as Genuine Fractals and Qimage. The processing choices made during RAW conversion, sharpening, and resizing were entirely subjective. I attempted to process each of the three files to a similar effect, maximizing apparent detail at the expense of slight oversharpening at the 100% view. The RAW files are available for download towards the end of this post for others to process according to their own preferences.

The 5D image was taken at 1/100s, f/11. The E-420 and DP1 were at 1/400s, f/5.6. All were at ISO 100. After taking ten captures with each camera using self timer and mirror lockup (where appropriate) on a sturdy tripod, the sharpest capture was chosen. SPP settings were at "0" except for highlights at "0.6" and X3 Fill Light at "0.2". Master settings were all at "0" with noise filter disabled and gradation at "Normal." C1 settings were "Standard Look" sharpening, Noise suppresion "Low", Color noise suppression "default".

The DP1 and E-420 samples shown below represent 100% crops of images that have been upsized to match the native 5D output size (12MP).
The specific area of examination is depicted by the yellow box in the resized photo preceding each set of crops. 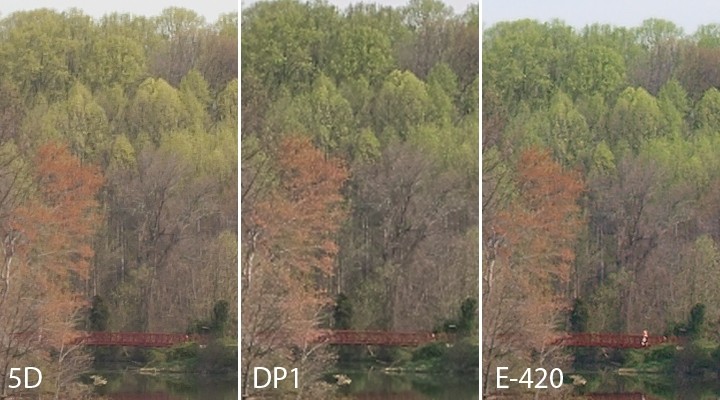 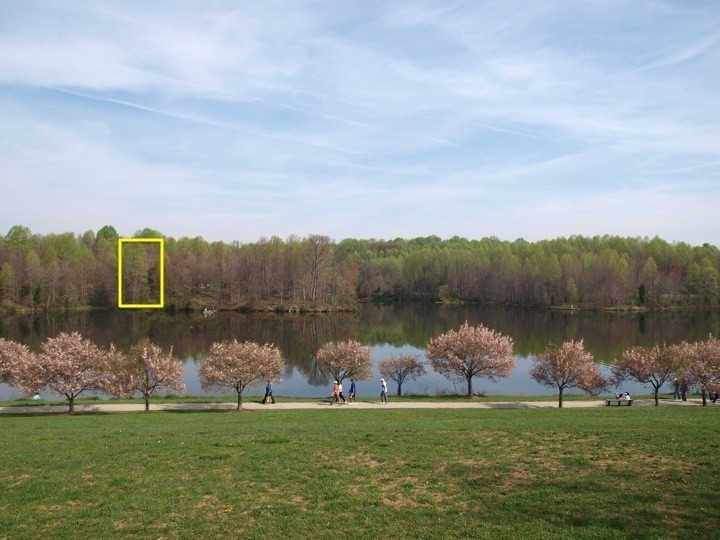 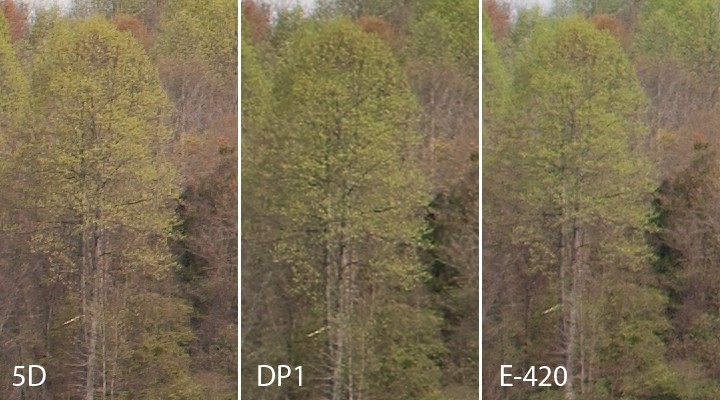 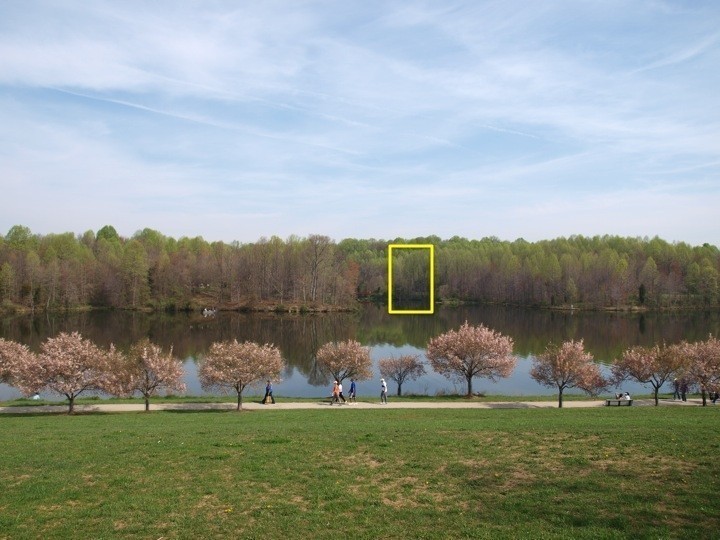 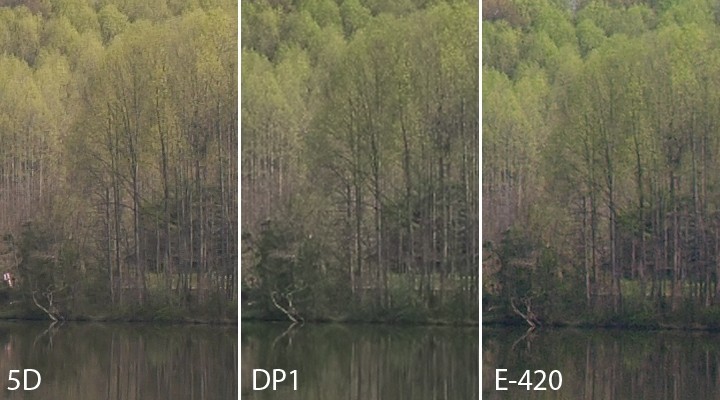 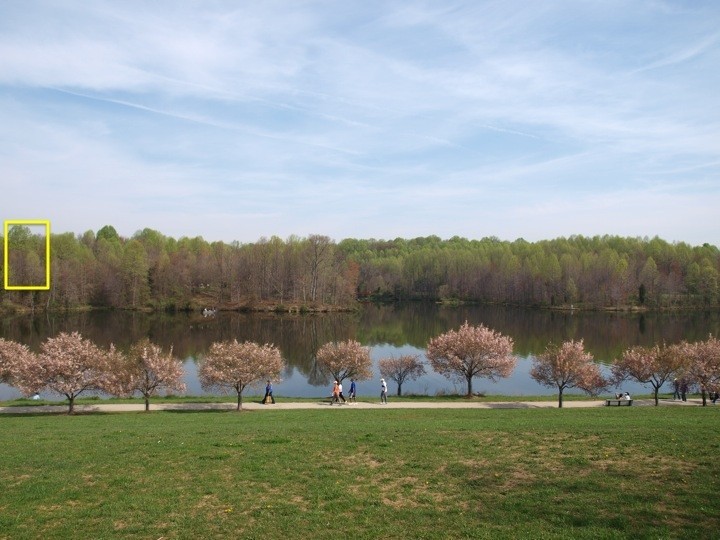 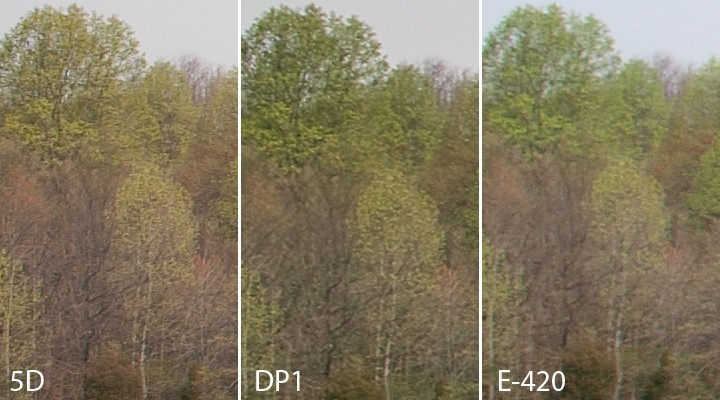 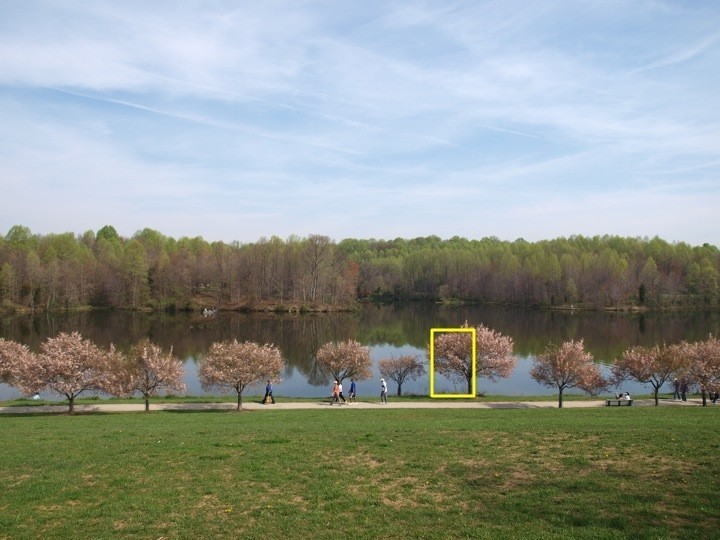 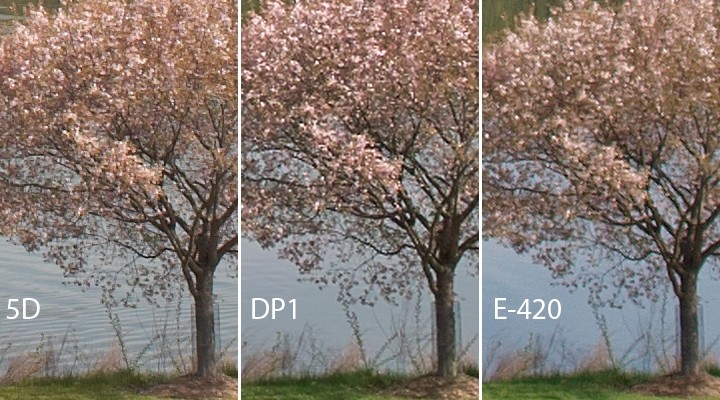 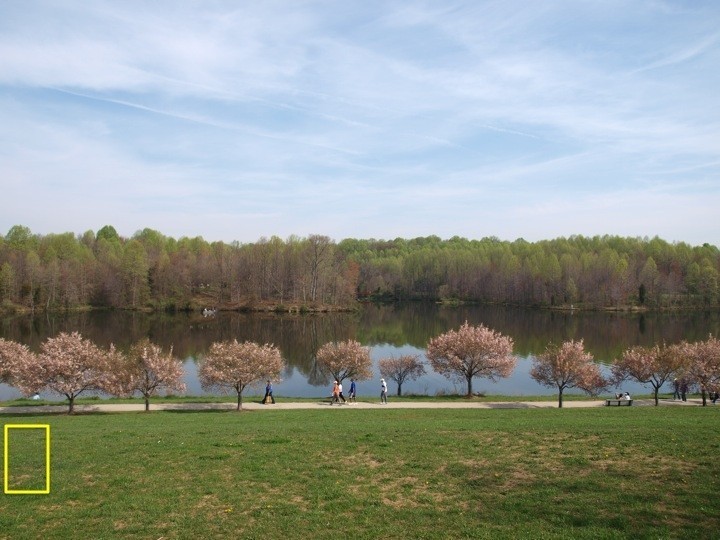 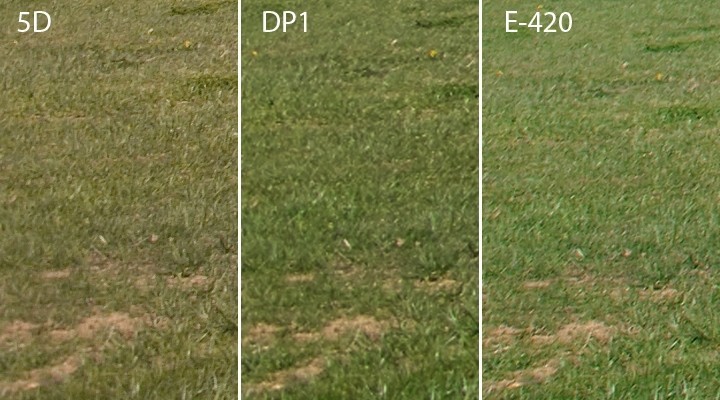 Overall, the 5D and 28mm f/2.8 combination is capturing the most detail throughout the frame with the exception of the extreme corner. The DP1 seems to do a good job of keeping up with the E-420 and 14-42mm kit lens combination, though the Olympus seems to have the overall edge in detail. I think it's worth pointing out that the 5D and DP1 are cleaner overall than the E-420. The extra sharpening needed to overcome the strong E-420 AA filter is accentuating the noise in those files.

In the next part of the shootout, we'll take a look at the low light, high ISO performance of the same three cameras in addition to the current compact camera high ISO champ, the Fuji F31.