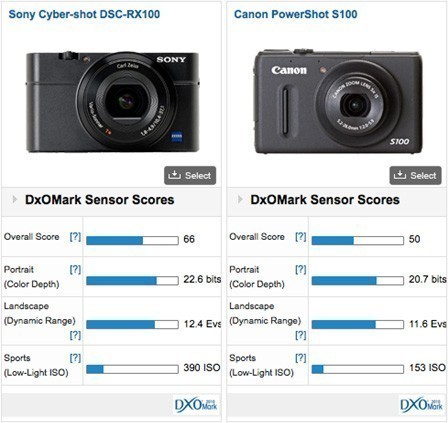 Holy moly those are some impressive numbers! Someone needs to put that sensor into more bodies ASAP.
J

With a fast prime.
I

Looked at the link where it compares to the x10, j1 and on.. and it stays on top!

It also beats most m43 sensors and older generation DSLR sensors when it comes to dynamic range and color depth.

Fuji already played their hand with the XF-1, but Olympus and Ricoh should grab this sensor for the XZ-2/GRD5!
I

It would be great on the GRD

I don't think its that quick a process. I'm sure the Sony folks were working on that camera for a year or 18 months and took everyone by surprise. You don't just stick that sensor in an existing camera - there's gotta be a LOT of design work. I'm sure Olympus is already very far along in their development of the XZ2 and, unless they had an inside deal with Sony, I'll be very surprised if it contains a larger sensor like this. Since the GRD5 is probably a year off, maybe Ricoh still has time to do something with it. But for Panasonic, Fuji, Samsung, Canon, etc, I think its gonna take at LEAST another year before we see new compacts with that sensor, probably more like 18-24 months. Too bad - I'd love to see it. But I'm not making any bets.

Supporter!
You're spot on Ray, but say it again slowly ... RX100 sensor in a GRD body. I know I have to wipe the drool from my chin on that one!