That can't be right though, if you push an ISO 200 image by +1EV you're almost guaranteed to blow highlights, the pseudo ISO 100 setting protects the highlights but pushes the rest by +1EV, giving you less noise but sacrificing dynamic range to do so.

It works fine going down in ISO, take an ISO 200 shot with -4EV and push the image back up in PP, then you get the same result as if you had shot in ISO 3200, but if you shoot at ISO 3200 with +4EV you will have blown tons of highlights you can't recover compared to just shooting at ISO 200.

Thanks or That Amin

I'm here in CA right now with my GF

I took both the GH2 and the EM-5 with full grip + 24-70 2.8 (quite heavy) or the very useful but slow 14-140
I can say the EM-5 is just so much better at capturing the wide dynamic scenes here images are just amazing.
The GH2 is usefull for a light easy to use rig and my choice for Video's.

Chris2500dk said:
That can't be right though, if you push an ISO 200 image by +1EV you're almost guaranteed to blow highlights, the pseudo ISO 100 setting protects the highlights but pushes the rest by +1EV, giving you less noise but sacrificing dynamic range to do so.
Click to expand...

That's not how it works. You can test this with any number of cameras. Say for example you shoot with an E-P1 at ISO 200 in P mode and the camera chooses f/2.8 and 1/100 shutter speed. The E-P1 tone curve is such that it protects highlights (which is why DxOmark measures the ISO as ISO 100). Now if you dial in +1EV, your E-P1 might choose f/2.8 and 1/50s, and you lose a stop of highlight headroom in the RAW file and now have a much greater chance of clipping the highlights. So far this is exactly what you said. Now if you choose nominal ISO 100 on the E-P1 (which is an expansion setting) the camera in P mode would give you f/2.8 and 1/50s just as it did when you chose ISO 200 and +1EV. It would apply the same amount of analog gain as if you chose ISO 200, and the highlight data would be just as clipped in the RAW file. The difference is that the JPEG engine or RAW app would "pull" the tone curve to make the overall file look properly exposed, but the data captured is identical to what you would get with ISO 200 and +1EV. I've done this experiment many, many times with expansion settings on many cameras.

If you don't believe me, Google "ISO 50 Canon 5D" and you'll find a million people explaining why this expansion setting gives you less highlight headroom in the RAW file and less noise in the final result. It's just a way of telling the camera to use the base ISO but expose one stop further to the right while pulling back a stop in the tone curve applied to the RAW data.
W

Amin Sabet said:
Hi Wolfgang, there is no "cheating" to this practice. Some more on this topic:

The Online Photographer: RAW is not Raw
Click to expand...

I´m an avid follower of theonlinephotographer, so I wrote my posting in full awareness of these articles. Thank you for the links anyway, for sure they are helpful. Let me explain why I still consider this practice dubious. The point is: once you determine the base ISO of the sensor all other ISO values fall in place by the definition that it´s a 1 EV difference when ISO doubles. Of course a manufacturer can choose the base ISO at his liking. So, Sony decided that ISO 200 is something like "dxo ISO" 160. That´s fine, nothing wrong with that. Once this is defined, ISO 400 should correspond to "dxo ISO" 320, 800 to 640, ..., 6400 to "dxo ISO" 5140 (always a doubling of each value for each 1 EV step). However, in the measurement the Sony ISO 6400 corresponds to something close to dxo ISO 3200 (maybe 4000). So, Sony doesn´t only tweak the base ISO (which they are allowed to do) but they are compressing the ISO scale what I consider cheating.

As I said, a lot of other manufacturers do the same. Of course it provides you a marketing advantage to look good in the high ISO range. Quite a number of reviews in the internet show "ISO 6400" images and rave about them, when in fact the presented image is an ISO 3200 shot or close to it.

It was pointed out to me that the exposures were not matched in the comparison I presented and that this might affect the DR results, so here are some supplementary data with matched exposures.

As you can see, with matched exposures the RX100 (left) has less recoverable highlights: 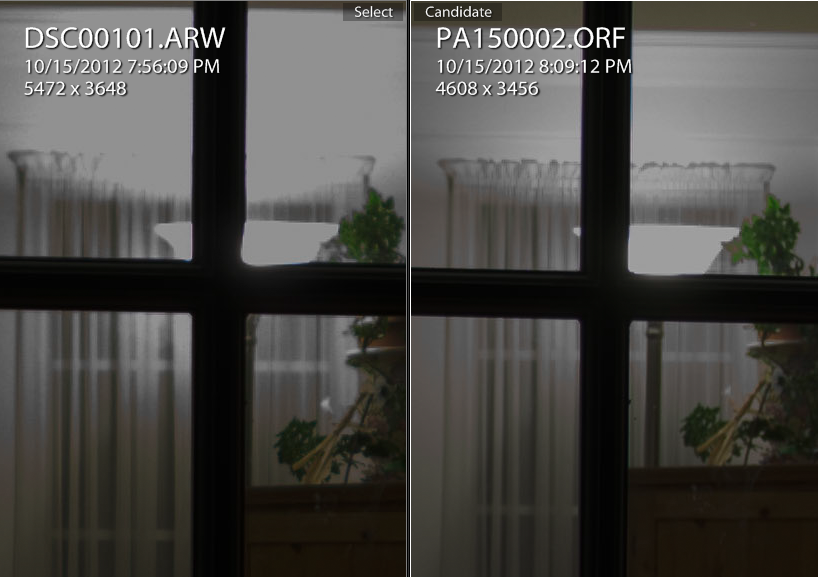 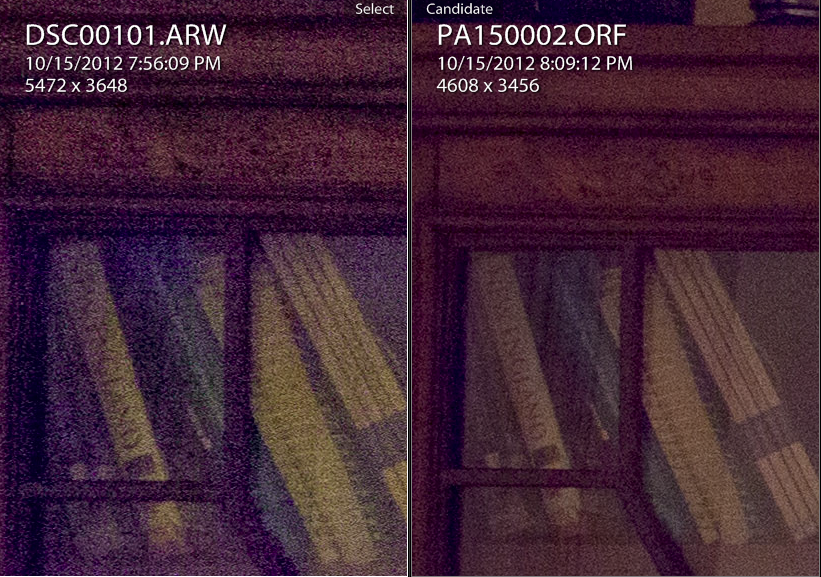 The GX1 highlights (right) are even more blown than the RX100 highlights: 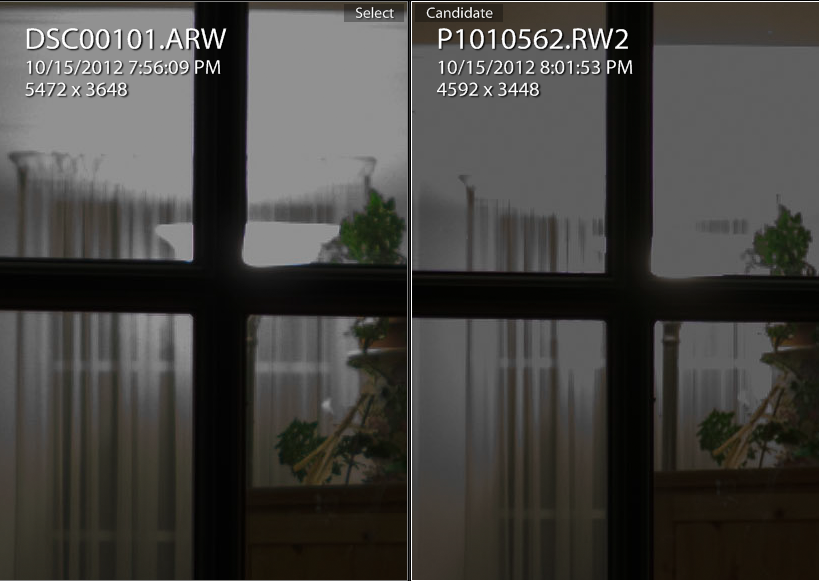 Meanwhile the GX1 shadows look better than they did in the first comparison but still noisier than RX100: 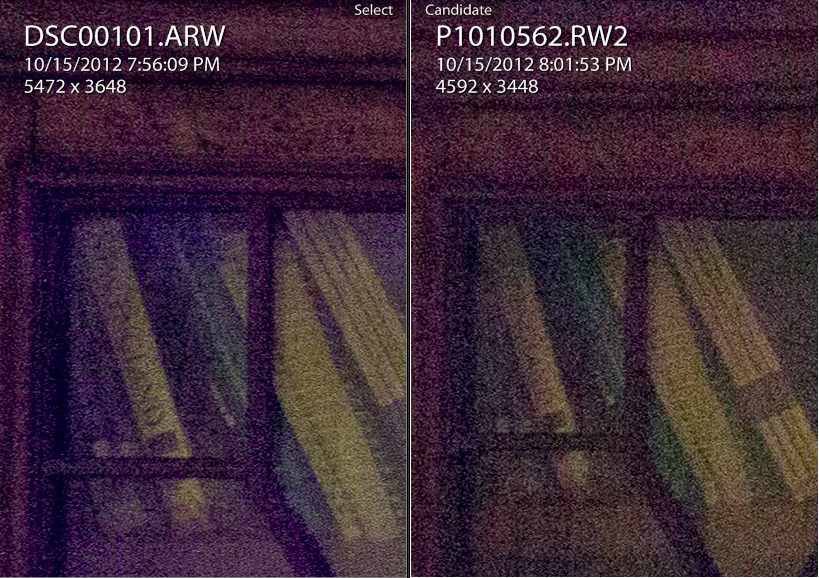 RAW files from this exposure-matched comparison:

wok64 said:
So, Sony doesn´t only tweak the base ISO (which they are allowed to do) but they are compressing the ISO scale what I consider cheating.
Click to expand...

It's still not cheating so long as whatever nominal ISO Sony designates for any given ISO tells you the relationship between expected output brightness and exposure. In other words, according to what you're saying Sony uses less analog gain and more digital gain for very high ISOs. This does not confer any advantage when it comes to apparent image quality at nominal high ISO. In fact, it usually confers a noise penalty.

Lets take an example where two companies use the same exact sensor in two different cameras. Here "analog gain" refers to DxOmark-measured ISO and correlates with sensor "sensitivity" while "digital gain" refers to "pushing" the file in the JPEG engine or supporting RAW converter.

Now lets say that we are using the same two cameras to produce an image of "ISO 1600 brightness" for a given light level, shutter speed, and aperture:
Camera A applies "ISO 1600-equivalent" analog gain and no digital gain.
Camera B applies "ISO 100-equivalent" analog gain and 4 stops of digital gain.
In your terms, Camera B is the ultimate "cheater" here. In reality for a typical sensor, all that pushing will incur a noise penalty. The tradeoff is that by keeping the analog gain at its base value, 4 stops of extra highlight headroom is preserved in the RAW file.

The bottom line is that for a camera to produce a file of a certain desired brightness, dynamic range has to decrease under low light, shutter speed-limited circumstances. When a company alters the relationship between DxO-measured ISO and nominal ISO at a given nominal ISO value, all they are doing is choosing a tradeoff as to how to spend their available dynamic range (ie, on highlights or on shadows) for a given set of circumstances. There is no cheating.
G

Thanks for the comparison! Looks like the E-M5 maxes out the blue/green highlights in the first comparison, causing the wall to turn red. That might explain some of the advantage in the shadows compared to the RX100, despite the close DXO numbers. The RX100 is certainly impressive, though.

After spending the morning comparing ISO 80 and ISO 125 files from the RX100, I've concluded that they are exactly the same. I did two consectutive shots at f/4, 1s, first with nominal ISO 80, second with nominal ISO 125, and they are visually identical after tone curve matching, regardless of whether I use Lightroom or dcraw for the conversion. 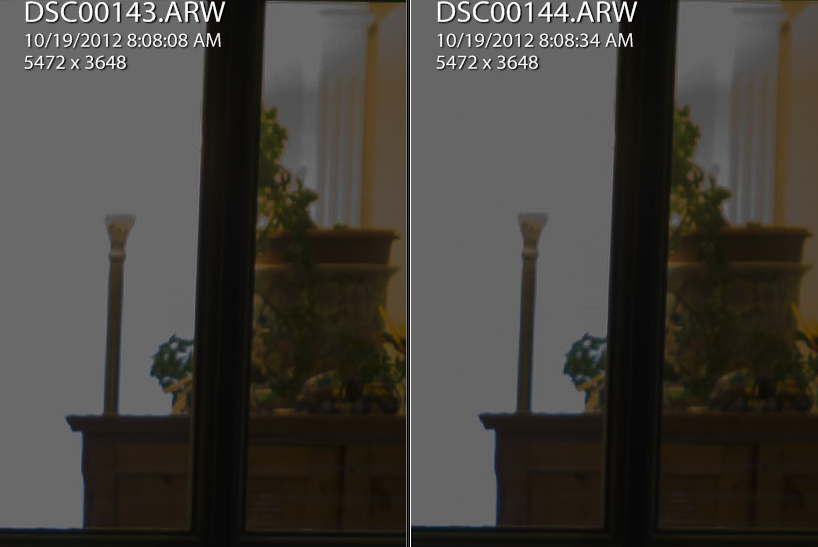 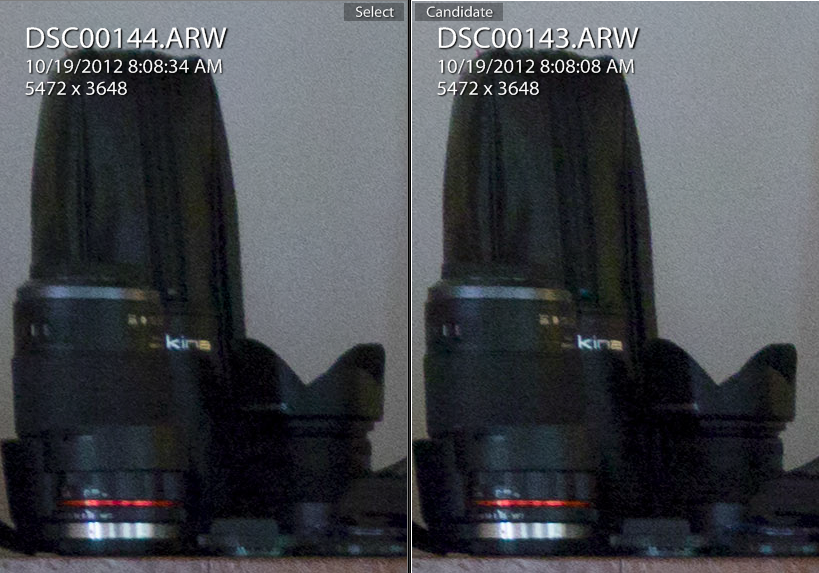 Weird that DXOmark finds differences between ISO 80 and ISO 100 and doesn't test ISO 125 (the official "base" ISO for this camera): 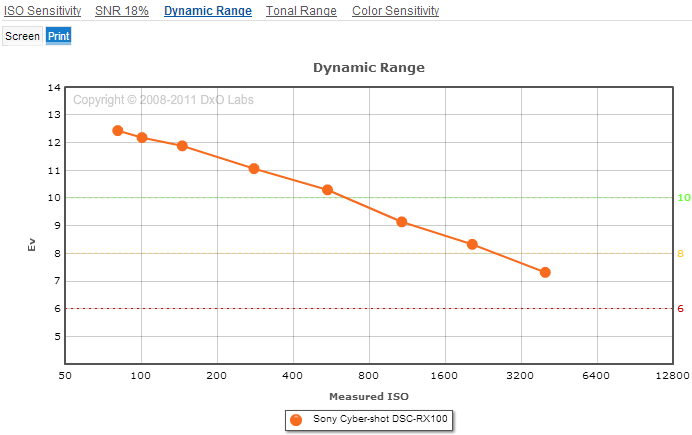 Yes it is quite odd.

I've been playing around with my RX100 and there's no doubt that while it's much better than any other compact I've had before (S95, LX5) the dynamic range is a far cry from APS-C (Nikon D5100 for me). There's isn't very much headroom to pull back blown skies, and the difference between doing it on a RAW or a JPEG is very small. I think bracketing or built-in HDR mode (which I find is excellent) is better for high DR scenes.

I'm beginning to enjoy the camera a lot though, it seems to reach my "good enough" criteria and it makes me think less about technology and more about just shooting

Ah, at least that part makes sense then. Still odd that DxOmark finds such a huge dynamic range for the RX100 when real life testing doesn't seem to support that.

Based on a discussion of these tests at DPReview, I've concluded that the shadow areas shown in my test were not deep enough to get at the lower limit of DR for these cameras. I reshot the test with deeper, darker shadows, and I'm unable to demonstrate an advantage in detail relative to noise in the darkest shadows for either camera when the highlights are matched. Now it makes sense to me that the DR is basically the same.

I think 99% of photographers would compare the overall files from these two cameras and conclude that the E-M5 has better DR, but that just highlights the difference between what most of us are calling DR and what DR actually means. To me it also illustrates how DR has less bearing on landscape results than DxOmark indicates that it does.

My brain hurts from trying to digest that thread, but it sure is interesting

Amin Sabet said:
To me it also illustrates how DR has less bearing on landscape results than DxOmark indicates that it does.
Click to expand...

Thanks for poking further into this. Frankly, I am astonished and delighted with the performance of digital cameras, even those that don't have particularly high overall DXOMark ratings.

Chris2500dk said:
My brain hurts from trying to digest that thread, but it sure is interesting
Click to expand...

I had the same reaction, but in the end it was a worthwhile discussion, at least to me.

Amin Sabet said:
I had the same reaction, but in the end it was a worthwhile discussion, at least to me.
Click to expand...

Its an excellent testing you done Amin. I love the way you challenge DXO, then developed the story with further testing / discussion. DR is definately one of the most important aspect of photography and specially the landscape. However in my poor opinion, with the recent advancement of software based, post processing and multishot HDR are getting better, its becoming less of a concern, comparatively.