Input appreciated on pros and cons of each of these for still photography:


I have the E-P2 but the flatness of it is really bugging me. Also, I appreciate built-in VFs.

And though I say no video I'm sure I'll end up using it if it's available. It's just not the primary purpose of the camera.

Andrew, I can only comment on the E-PL1 as compared to the E-P2 since I have had both. For me, the E-PL1 had "better" photos out of the camera. At the time I didn't have RAW capabilities and didn't even know the depth of what could be done with RAW... I feel I got great results with the E-PL1, though I also have some very good photos with the E-P2, if I do say so... If I'd kept the E-P2, I'm sure I would have mastered it...because I was just getting to when I sold the body and bought the E-PL1. The jpegs are very, very, very good and so is the RAW. I have many examples on Flickr. (Now I have neither! Don't use me as an example - I bought the Leica X1 and fell in love...sold the PEN stuff but I digress.)

I know many who miss having the built in viewfinder and that's why they've gone over to the G2...and or love their GH1 or may buy the GH2. I know that John (john1027) switched to the G2 having used the PENs, so he should be able to add in his feelings once he reads your thread. I know that Don switched to the GF1, too... You should get some good replies as the day and evening progress.
A

Thanks Wylie. Yes, I've read their commentary here. But I can always use more input I know a lot of people like the E-PL1 for its lesser AA filter. If the Panasonics had that too my choice would be easier!

I prefer my X1-like cameras for some purposes (Sigma DP2s and DP1s and Ricohs), but for all around use the mFT cameras are very useful and compelling.

One more thing to note... I will also be using a Zeiss 50/1.5 m-mount lens, but always at f/1.5 so IBIS is not necessarily a requirement for this. Manual focus feedback is more of a concern.

Add the GF1 to the mix....Stunning camera!
A

Right, but that's more of a flat camera like the E-P2.
L

Is noise a factor in your selection?

I don't have an answer, but a question you already may have considered. I'd like to update my Panasonic LX-1 and FZ8 with either an E-PL1, or a GF1 or 2. I've liked my Panasonics with the exception of noise, especially in low-light interiors. Do you know if your E-PL1 significantly reduces noise as compared with the Panasonics you mentioned?
J

To an extent, you somewhat narrowed your choices by mentioning that you do not care for the flatness of the EP2. That points to the G series which would also give you the built in EVF you favor. I had an EPL1 and it does take very good jpegs OCC but the RAW images with just a little tweaking are just as good (imho) in the G2. The 14-140mm is a good solid performer but a bit heavy on some of the smaller cameras but does fit and balance nicely on the G series. If you have the funds and a little time, I would advise waiting for the GH2 which has the promise of a better processor and may be better in IQ overall. On the other hand, some folks like to buy one update or generation behind which certainly is a viable option also. Bottom line, you should be fine with any of these models performance-wise, and you just need to weight the features and pros and cons of each against your personal preferences.

There is a thread over at mu-43.com, as well as a wealth of other information on the models you have mentioned as potential choices.
A

Thanks John. I decided to sit tight for now, expecting that in the next few months Olympus will release their "G2." In the meantime I bought the Olympus 14-150mm lens which so far is very impressive. I can see that although some are disappointed in the E5 and plans for FTs Olympus is putting effort into their new market. I figured that a move to the G1/2 would be lateral and not necessarily an overall improvement. But the GH2 does look interesting and like the first of the second generation mFT cameras.

Oddly enough I did not know about mu-43.com. Lots of good stuff there!

Andrew I have the G series and the Pens .... All take great pictures .... the PL1 has the best OOC jpeg

For small lenses I prefer the Pen form factor
A

Thanks Boyzo. All of this is helpful. It is rare that I shoot long and the Olympus 14-150mm seems reasonable to handle on the E-P2. I tend to prefer primes, which I agree do work well on the Pen form factor. And I also like the Pen design when paired with my Zeiss lens.

But the built-in EVF would have advantages and I find it hard to get my eye close and tight to the Pen's EVF.
D

Am I missing something? The E-PL1 is just as flat as the GF1. 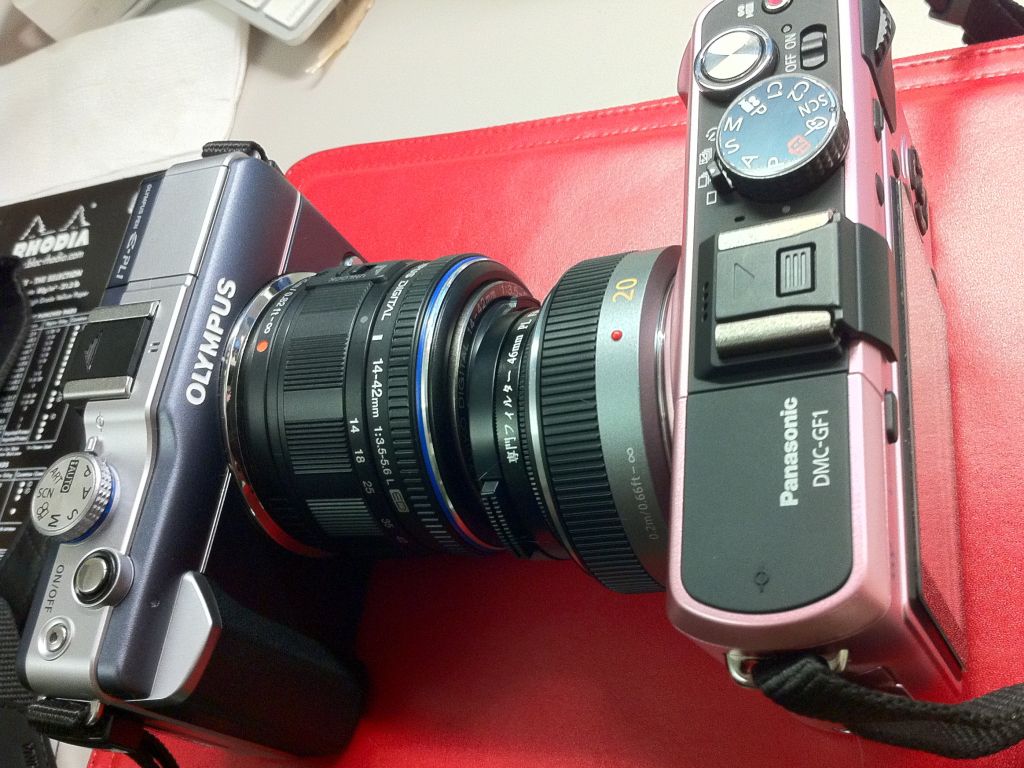 Well, they both have a grip, but I will grant you that the EPL-1's is more prominent and has a rubbery feel. 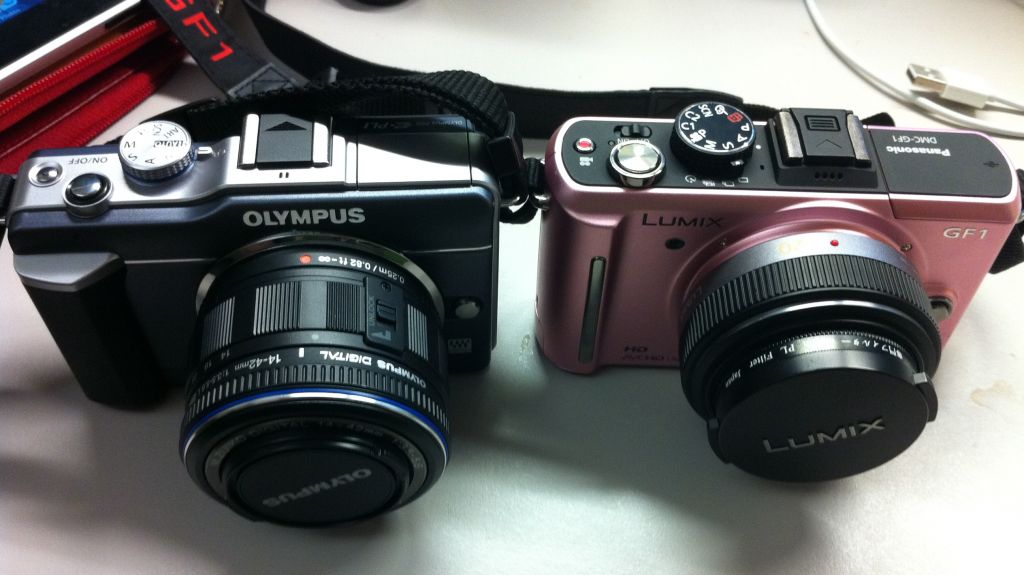