I was re-reading the excellent Sigma DP1 review by Edward Taylor on TOP and paused at the following statement:

"First let me make it clear that the DP1 is not and never could be what is referred to on TOP as a DMD (Decisive Moment Camera). Why? Because it is slow. That is one of the main reasons I called it a 'blast from the past.' It suffers from shutter lag, slow focusing, LCD screen lock, and slow write speeds like I haven’t seen in years."

As I'm sure Mr. Taylor and most of you reading this article know, shutter lag per se is no longer a major factor with digital cameras. The term "shutter lag" is commonly used to refer to the time that it takes a person to capture an image after attempting to do so. In this sense, shutter lag can be broken down into the following components: 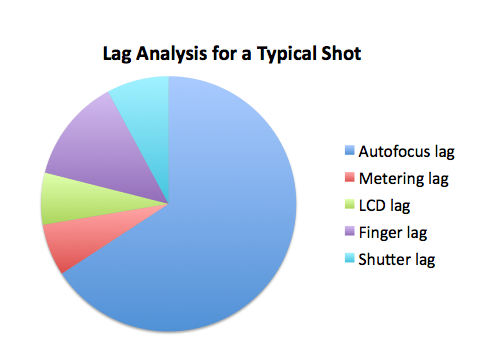 The good news is that, with most current cameras, nearly all of these components of lag can be eliminated.

Eliminating autofocus lag: The key here is to set the focus in advance, so that the time it takes to achieve focus lock does not interfere with capturing "the moment." This can be done in a variety of ways. The most common approach is the half press, which will achieve the focus and lock it until either the capture has occurred or the shutter button is released. This method has a few downsides: 1) it may require keeping the button half pressed for quite a long time; 2) on most cameras, this will also lock in exposure settings, which may differ from those optimal for the capture; 3) one frequently does not have sufficient time to achieve a half press focus lock when the moment presents itself; and 4) the DP1 LCD inexplicably freezes briefly at the moment of the half press.

Given these limitations, it is often necessary to use a different method. Many advanced compacts offer the ability to assign autofocus lock to a custom button. In the case of the DP1, this function can be assigned to the "AEL" button. The advantage of this method is that it avoids first two downsides above, needing to hold the half press for a long time and linking the focus point to the metering mechanism. The disadvantages are the same as 3 & 4 above.

How to get around all of these issues? Focus manually. Zone focusing has long been a method employed by photographers, and never has it been easier than with today's advanced compacts. With a typical compact camera used at the wide end of the zoom, manually focusing to about 3 meters will keep just about everything beyond 1.5m in focus. If you shoot wide and know that your subject will be in very close range, then simply set the focus to 1 or 2m. Experiment! DOF Master is an excellent online resource to help guide experimentation with a particular camera; however, it takes only brief trial and error to learn which manual focus settings to use for a certain application with any given compact digital camera. With zone focusing, the major component of lag is gone.

Eliminating metering lag: Metering lag can be dealt with in the same three ways as autofocus lag, with the same advantages and weaknesses in each case. A half press will lock in exposure settings but will tie this to focus and requires holding the button, sometimes for long periods. Metering can frequently be controlled with a separate, sometimes customizable button; however, there will still be a lag if one leaves the task of metering until "the moment". Again, the ultimate solution is to control the exposure settings manually. This takes a bit more getting used to than does setting the focus manually, but one can use the settings chosen by the camera as a guide. Many cameras (regrettably not the DP1) offer a live histogram, which is an excellent aid in choosing exposure settings.

Eliminating LCD lag: The key here is to keep at least one eye directly on the subject. The most direct way to accomplish this is through the use of a built-in or accessory optical viewfinder. However, when an optical viewfinder is not available or not preferred, it is still possible to keep an eye directly on the scene while glancing occasionally at the LCD screen to establish framing. This is a trick I employ all the time when using compacts to photograph my young children. With three and five year old boys, every bit of lag counts. I often found that I could not capture a fleeting smile while looking at the LCD. With my eyes directly on the child after framing is established, the hit rate is quite a bit higher. The other advantage of this method is that the subject is nearly always more engaged and natural with the photographer making direct eye contact.

Eliminating finger lag: I have no advice here. However, the use of digital has done much to help counteract hesistant finger syndrome. We no longer worry whether the picture we are making is worth the price of the film, development, and print.

That's it. All we are left with is shutter lag, which is generally an insignificant period of time. Of course there is also the matter of having the camera out of the case, on, and with the lens extended (where applicable); these are outside the realm of what anyone considers with regards to "shutter lag" but no less critical for getting the shot.

Here is an example from this past weekend where I put the aforementioned techniques to practice. I was walking in Washington, DC with my family. The sun was shining, and I had the DP1 set to manually focus at 2m with exposure settings locked at f/8, 1/160s, and ISO 100. After seeing a Segway tour approaching, I called over my little sons to take a look. This got the attention of a woman riding, and she smiled at me. Seeing an opportunity, I raised the DP1 to establish framing. At this point, recognizing that I had called over the kids and was about to take her photo, she began to laugh. I think she felt a bit silly on that Segway. Having established rough framing on the LCD, my eyes were directly on her. Making the capture at the instant she started laughing was no problem. 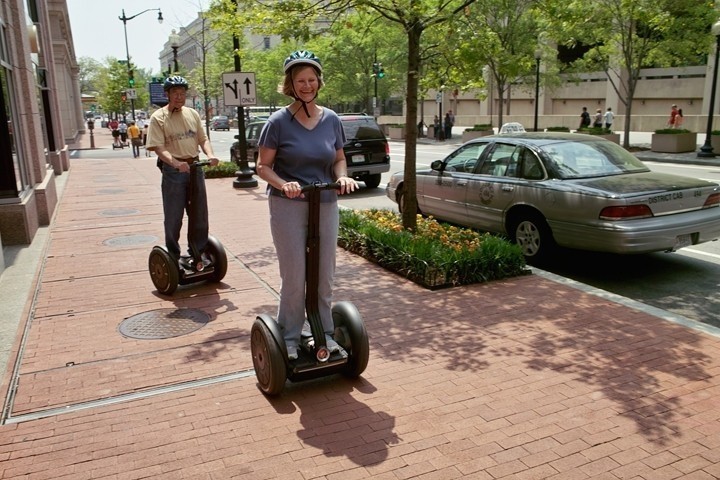 While finger lag (more accurately, brain lag) remains a significant problem for me, I frankly can't remember the last time shutter lag kept me from getting the shot. Of course I would have been out of luck if the next photo opportunity had presented itself during the 4-5 odd seconds the DP1 pauses to consider between shots. Luckily or unluckily, decisive moments never seem to come that quickly in succession for me.

Or you could just buy a Ricoh.

But don't buy a Canon compact. Very good for some applications, but even when manually focused or prefocused and pre-metered, there's STILL a lot of shutter lag with the S90 (and I've read the same issue is there with the S95 and the G-series cameras). The most frustrating camera I ever tried to use on the street. The LX5 has zero shutter lag once you're prefocussed and most cameras can be made to behave pretty well, but I never could get the S90 to speed up no matter how many tricks I tried...

I look forward to experimenting with my Ricoh GR III which is on the FedEx truck as we speak on the way to my house!

Not Compact, Not Digital