I love making images, particularly on walks or hikes. While I do occasionally start a project I often just go out to see what I can see.
Because I am on the move and usually have family in tow, I find small and light, a "Serious Compact" is essential.

My GR and the DP2M are my mainstay but sometime ago I invested in a EM-5 for the interchangeable lens ability.
I have a native 14mm and 45mm with some older lenses from my OM Zuiko days. The 45mm constantly amazes me.
I do use the EM-5 for a little bit of video, nothing serious but that's the other reason for the EM-5's existence.

Just lately though I have been considering selling off the EM-5 and going to a GM1 for its ability to be coat pocketable with the 45 or other m43 lens.

Am I mad? Will this be a mistake?

I own both the E-M5 and GM-1, and I can tell you right now that I am using the GM-1 far more than the E-M5 because it is coat pocketable and very discrete to shoot with. I shoot mostly with the kit 12-32, which is a very good optic for general shooting, and it's slow max aperture is more than compensated for by the very good low light capabilities of the GM-1/GX-7 sensor. That said, I also shoot a lot of indoor events with the 45mm F1.8 or the Panny 20 1.7, and the handling is great; I hear the Panny 14 is an even better fit with the GM-1 because it is smaller than the 20. If you do not need the weather sealing of the E-M5, do not shoot a lot with long lenses, and if you are not constrained by having to shoot with an LCD only rather than an EVF, moving to the GM-1 should be no problem. The only reason I keep my E-M5 is because I do a lot of shooting with long zooms for my son's band performances.

The one bit you need to be aware of is that the GM-1 will take some getting used to since it is so tiny and the controls can be fiddly. I have fairly small hands, but still end up inadvertently mashing part of the d-pad and activating a different WB or focus setting. Nothing major, just a bit of an annoyance. I end up using the camera with the touch screen off so I don't mess up anything else (like focus point). All that said, it is a very solidly built camera, very responsive AF wise, and great for all-around street and travel shooting. I also got a third party grip ($9.99 Flipback rubber grip) which improves the ergonomics. See the size comparison with the E-M5 and E-PL3 which I posted in a separate thread a few months ago. Until I bought the GM-1, the E-PL3 was my "compact" m43 camera; I've since sold it. 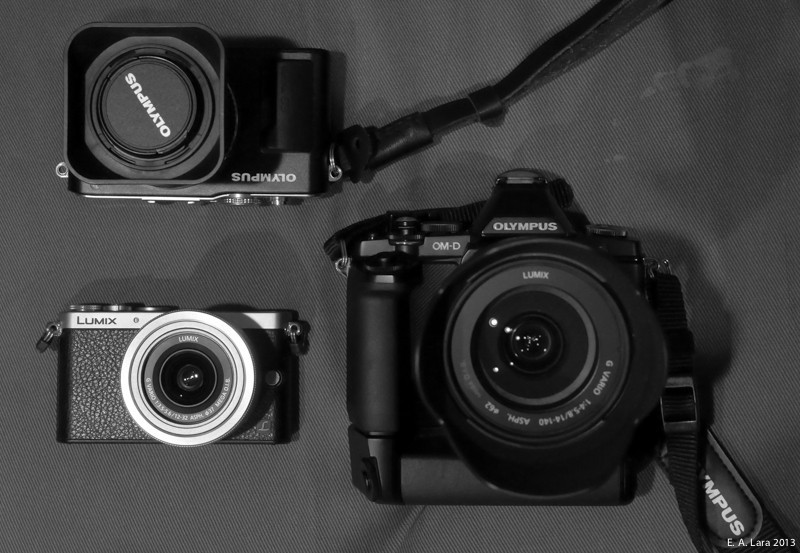 Penfan, that helps a lot. I do worry a bit that I may miss the 5 axis stabliser that the EM-5 offers for video.
I have small hands and have no problem with smaller buttons.

I am thinking perhaps get a GM1 and give it run for a while and sell off the loser.
Is the GX7 worth considering in the mix?

El Guapo said:
Penfan, that helps a lot. I do worry a bit that I may miss the 5 axis stabliser that the EM-5 offers for video.
I have small hands and have no problem with smaller buttons.

I am thinking perhaps get a GM1 and give it run for a while and sell off the loser.
Is the GX7 worth considering in the mix?
Click to expand...

The GX7 is a great camera, but not all that small - only slightly smaller than the EM5. I'd say the other m43 bodies to consider would be the EPM2 or EPL5, whch are larger than the GM1, but still very small and easily coat pocketable with the 14mm. Whether anything is coat pocketable with the 45mm is a matter of personal tolerance I guess, but I did a fair amount coat-pocketing the EPL3 and EPL5 (with the 14 mostly and the body cap 15mm) when I had them.

Agree with Ray, GX-7 is great, but not much smaller than the E-M5. if having a pocketable m43 camera is your goal, the GM-1 and EPM2 are your best bets. I also second Ray with the E-PL3, which I used extensively with the 15mm body cap for street shooting. The advantage of the EPL-3/5 vs. the GM-1 and EPM2 is the tilting LCD, which is great for waist level street shooting. If you shoot mostly nature on your hikes and travels, though, this may not be that important.

BTW. if having IS for video shooting is a consideration, neither the GM-1 nor GX-7 have it for video (GX-7 as you probably know has 3 way in body IS for stills). That said, if you do get the GM-1 with the kit lens, the lens does come with IS---I don't know how they squeezed it into that tiny housing, but they did!