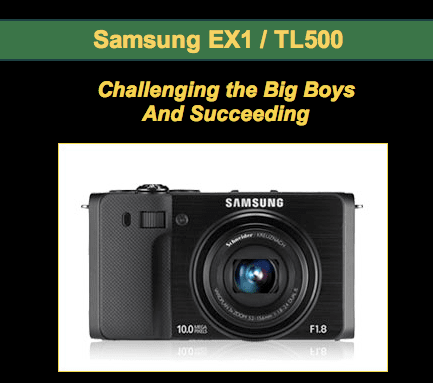 It looks like a very capable and enjoyable compact. It seems that Samsung have learned from some of the best aspects of recent advanced compacts from Panasonic and Ricoh.

From a certain point of view, though, this camera is just catching up to the LX3, while the LX4 (some say it will be called LX5) is right around the corner. It will be interesting to see whether Panasonic innovates as much with the LX3 replacement as they did with the LX2 replacement.

I'm surprised that both LL and PB mentioned LX3 but didn't really compare those cameras. In terms of specs and capability, the two most direct competitors for the Samsung are the LX3 and the Ricoh GX200. The S90 is much more pocketable, doesn't go as wide, and is lighter on controls, and the G11 lens is slower and has a very different zoom range.

I have an LX3 and EX1 on the way from B&H and will do a shootout featuring those two camera for Serious Compacts.
D

The only complaint I have about this camera is typical Samsung: Get rid of noise by obliterating detail. Other than that, its a good camera. I've actually thought this would be a good replacement for my other half's canon A560. I never played with the LX3, but I was not interested in its limited zoom range. The S90 when it came out perked my interest, but its lack of controls turned me off. Also, BB is not a great place to try and demo a camera.

Amin, I look forward to your impressions.
S

The fascination of this camera for me is partly the fast f1.8 lens, partly the articulated screen but mainly the tremendous depth of field using a small sensor allows.
A 5.2MM lens!!! My first serious digital camera was an Olympus E-10, and the DOF tricks with the 9mm lens on that were amazing. f8 looked like f64 on 35mm.

With a fairly restrained 10MP the samples I've seen look encouraging. Interesting to see how you get on with it.

Samsung Question about video with EX1/TL500