Today there have been two steam hauled express trains running through south Devon with one of them returning after turning round at Plymouth.

The mainline in south Devon was famous in the steam era for testing the locomotives and crew by having the 3rd (1 in 41), 4th (1 in 42) and 7th (1 in 46) steepest inclines on the British mainline in the space of some 34 miles. Enjoy the spectacle of seeing steam doing a proper job of work. 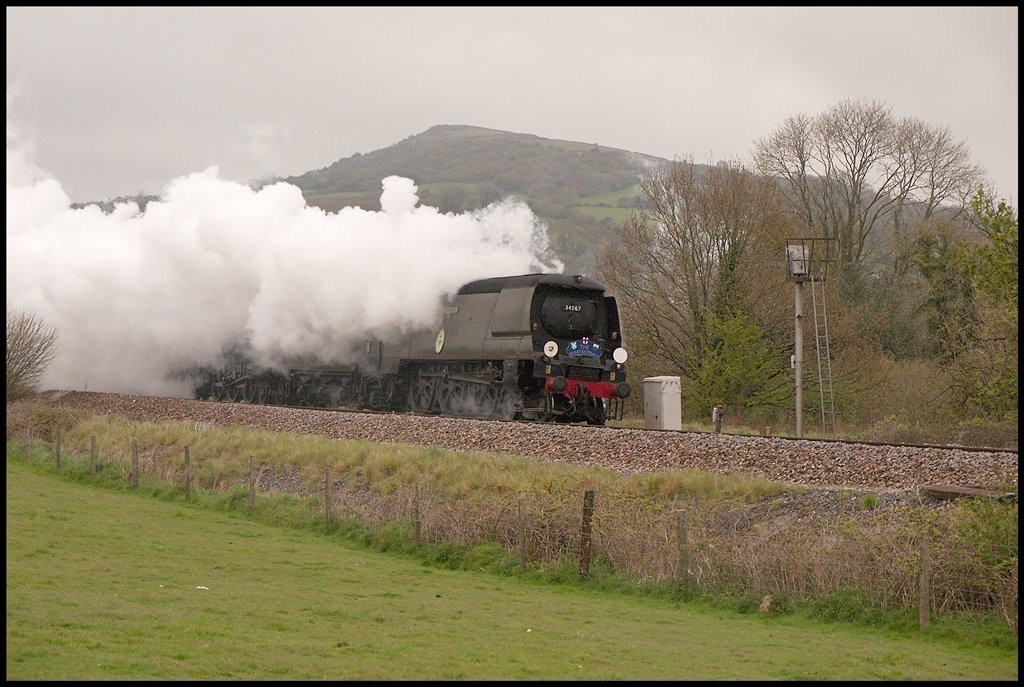 Here Tangmere and Oliver Cromwell near the top of the 9 mile long Rattery incline which has a stretch at 1 in 46 followed by another length at 1 in 51. At this point the incline has eased somewhat. In the background is Brent Hill on the southern flank of Dartmoor.
I'm reminded of two of the lines of W H Auden's poem Night Mail :- 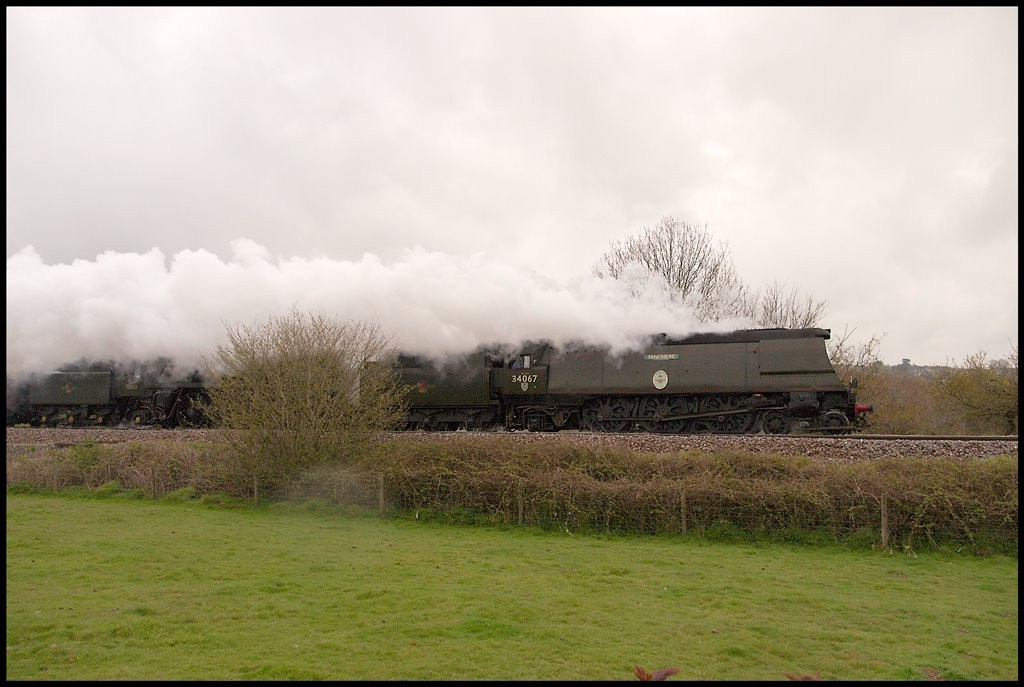 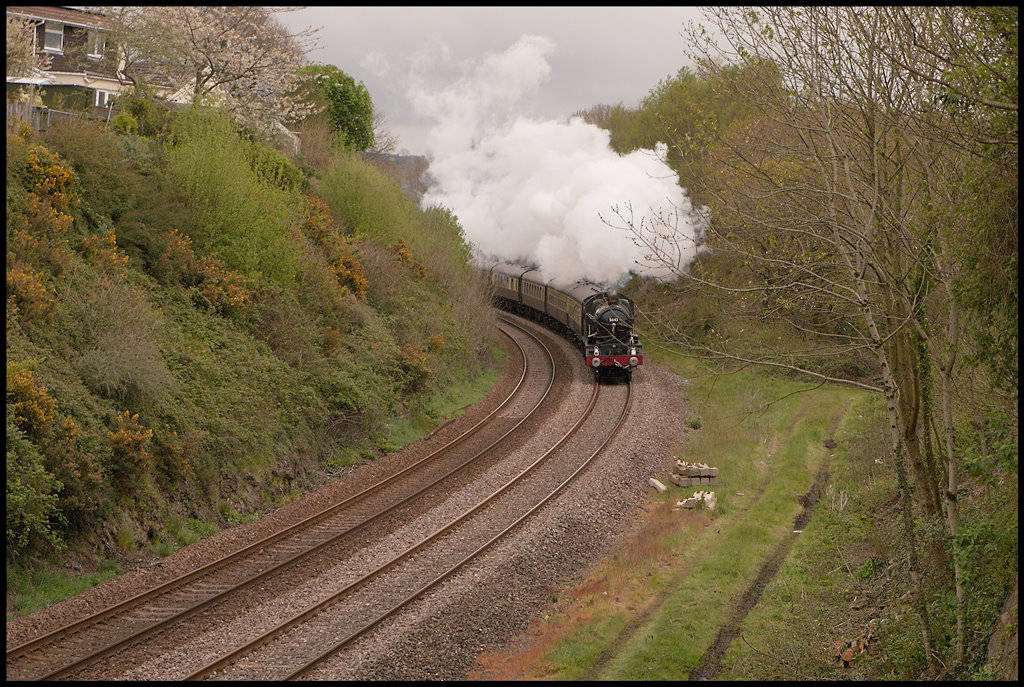 The 2nd train of the day rounds the curve into the site of the former station at Brent, still on Rattery Bank 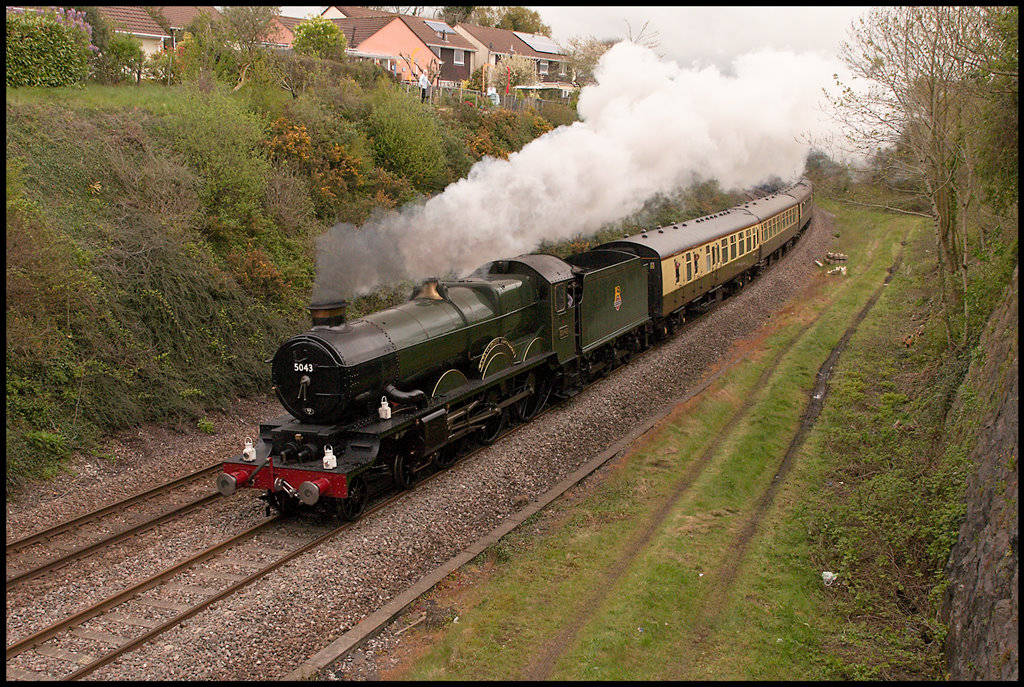 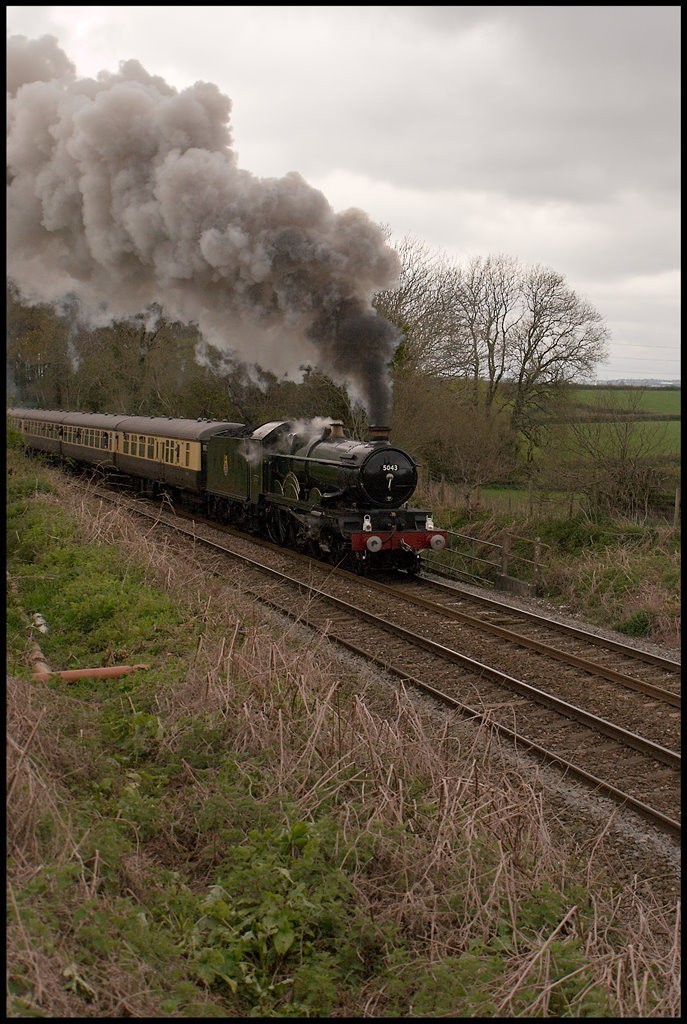 This is the return journey for the Castle class Earl of Mount Edgecumbe nearing the top of the 2.5 mile, 1 in 42 Hemerdon Bank. The locomotive will be in full gear with the regulator wide open and doing something like 15 mph at this point. With 9 carriages on she's very close to the limit for this class of engine to be working alone. 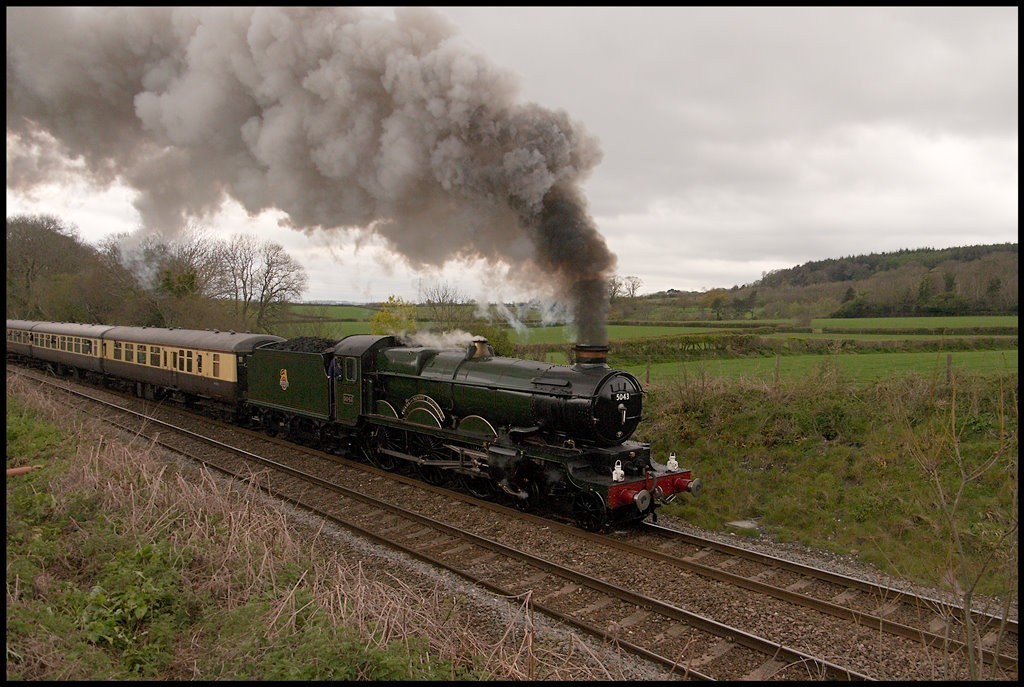 The gradient is beginning to ease to 1 in 51 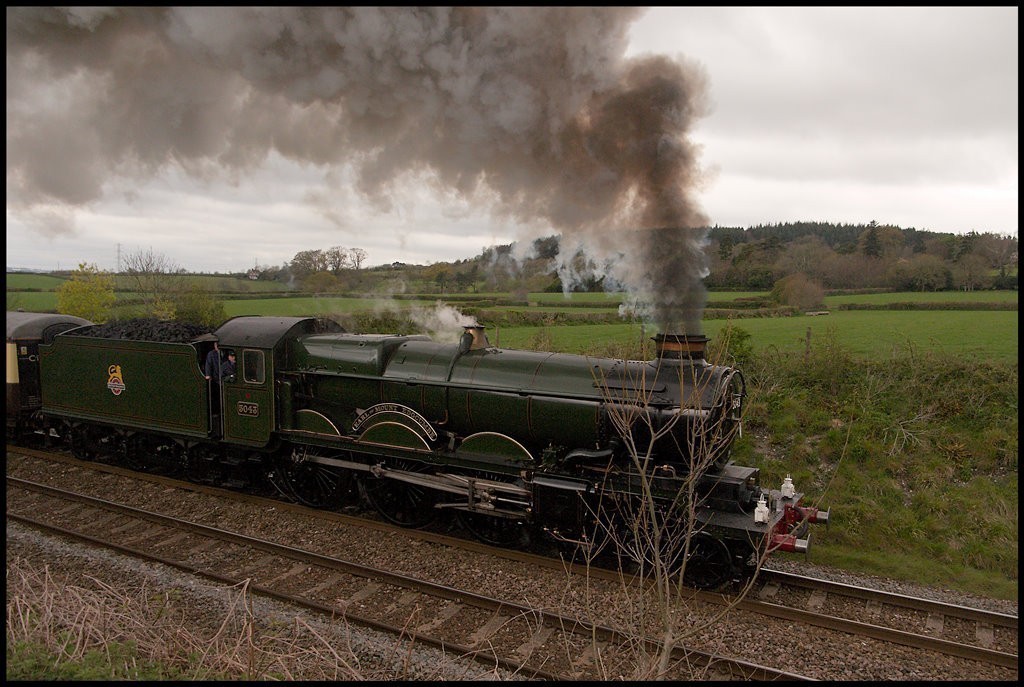 The crew are to be congratulated on a job well done, likewise the locomotive must be in fine fettle.

It was a cloudy day with light rain at times, but thankfully it held off at the critical moments.

What a superb set of images that capture the majesty and power of a long lost transport system that worked and kept the country working (also did not suffer from - wrong type of rain, leaves, snow).

Really well captured and are timeless in quality!
P

I slipped up slightly with these, leaving the iso at 200, hence the speed was a bit low and the choice of location could have been better. 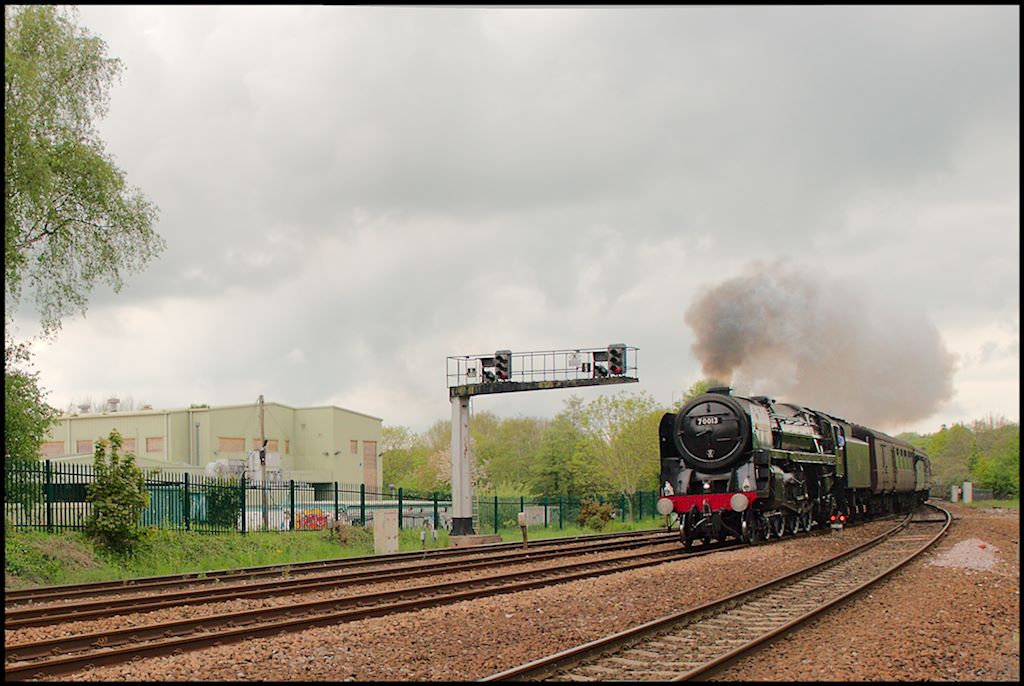 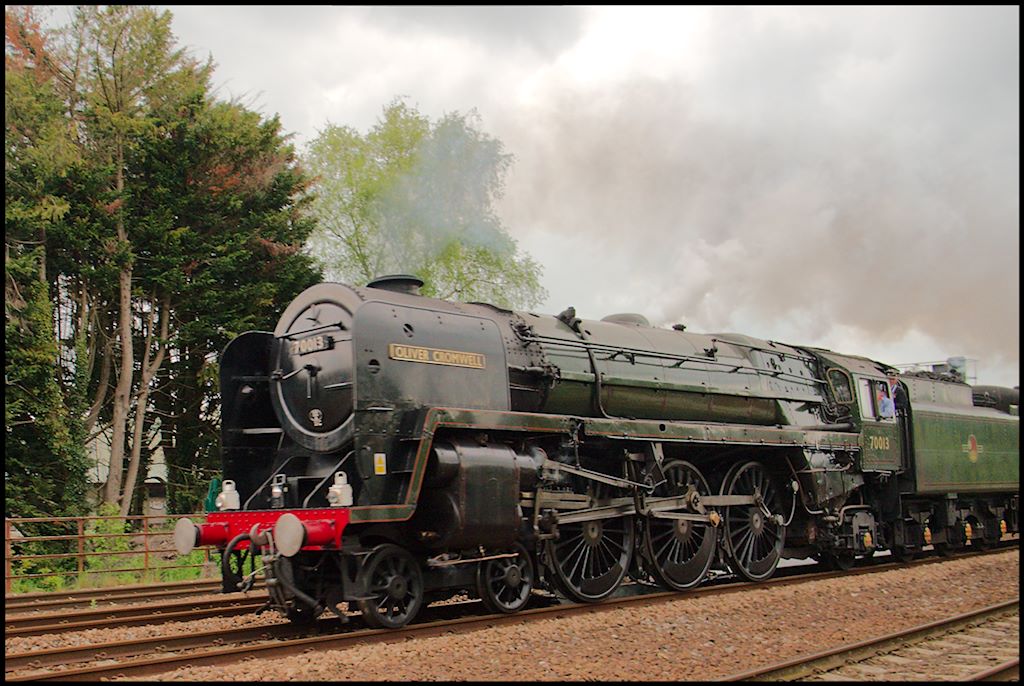 Britannia Class locomotive Oliver Cromwell passing through Totnes station in south Devon at I would guess about 60mph on a Bristol to Par (Cornwall) special.

Men at work, running steam on the South Devon railway

Some rough seas on the south Devon (UK) coast