Every so often I get an inkling to see if grass is really greener on the other side. Though mainly fantasy, it is interesting to see what equipment is out there. And maybe take some time to see what kind of interesting package I can put together. Prior to buying into Pentax, I did this with the Sigma DP Quattro. Through all of its faults, that camera really does produce some amazing results in the right hand. I even almost bid on one that was mount converted to Leica R.

My most recent foray was back at the Sigma well. Looking to put together a high resolution landscape rig that could capture big megapixel 65x24 ratio images I came up with this:

Which really isn't that bad. Those DG Contemporary lenses look really nice and are a pretty good value. And since I am a sucker for quirky and modular gear, the FP is really intriguing.

Anyone else fantasize like this? Maybe it would be an awesome wildlife rig. Or the quintessential monochrome setup.

I'd be signing up for your setup as well
Sigma's "I series" of lenses looks really good... and the colours that they get even out of the Bayer sensors in their fp's is quite nice too!

tilman said:
I'd be signing up for your setup as well
Sigma's "I series" of lenses looks really good... and the colours that they get even out of the Bayer sensors in their fp's is quite nice too!
Click to expand...

I wish the FP had some weather sealing. Or I trusted Panasonic's sealing.

I do like the medium format looks that the Fuji and Hasselblad give with that sensor. That would be a fun set up to play with for awhile.

Pass on the Macbook, though.

I think my fantasy right now would be to have a full complement of the FA Limited lenses for Pentax: 21, 31, 43 and 77. A little outside of my budget, however.

Going back to a setup that uses Leica M or LTM lenses is another occasional fantasy. I determined back when I decided to part with the Bessa-T setup that I couldn't financially justify pursuing a somewhat costly digital setup (basically, anything more expensive than midrange M4/3 bodies and midrange M4/3 primes), which I'll count the FF Pentax setup as being, and an M-mount setup. The optics are just too numerous, costly and enticing for the Leica mount, without a sudden extra income stream I couldn't pursue the system unless I ditched all but the cheapest digital stuff. Or, of course, bought a digital Leica, but again, extra income stream hasn't appeared out of the blue yet.

If I could get back into Leica mount stuff, I'd enjoy working through a couple more film bodies, probably not a jump straight into Leicas but experiencing the Minolta CLE, the Hexar RF and the Bessa R3. For lenses, I'd like to try out a few more of Voigtlander's offerings, like the 40 Nokton, 3.5/50 Heliar (for longer this time, I owned it briefly but sold it) and a few other 50s, the 25 and 28 Voigtlanders, and - outlier - the Lomography 32 Lomogon.

agentlossing said:
I think my fantasy right now would be to have a full complement of the FA Limited lenses for Pentax: 21, 31, 43 and 77. A little outside of my budget, however.
Click to expand...

This I would love to try, as well. I am about to sell off a few things and rearrange my current Pentax gear. If I found a great deal on the 21, I would probably jump at it.

I shot a Hassleblad X1D once. All I’ve wanted since then is to shoot one again. So that makes the win the lottery/dream list for me. Or hell, make it an X2D since it’s just a dream and you might as well dream big.

Probably a Nikon Z7II and a full set of primes.

I'll avoid all the unachievable fantasies I have (e.g. a new low noise, high DR, 36 Mp sensor in an Olympus m43 camera ). So, keeping to stuff I could actually buy if I had the money and the inclination to cart the stuff around:

That would be a nice kit!

I have this (reasonably priced) fantasy I'd see how it would work implemented with Fujifilm gear. I'd also like to re-experience the best 35mm Fujinon there is, and collect the other lenses that formed the original three ILC lenses. 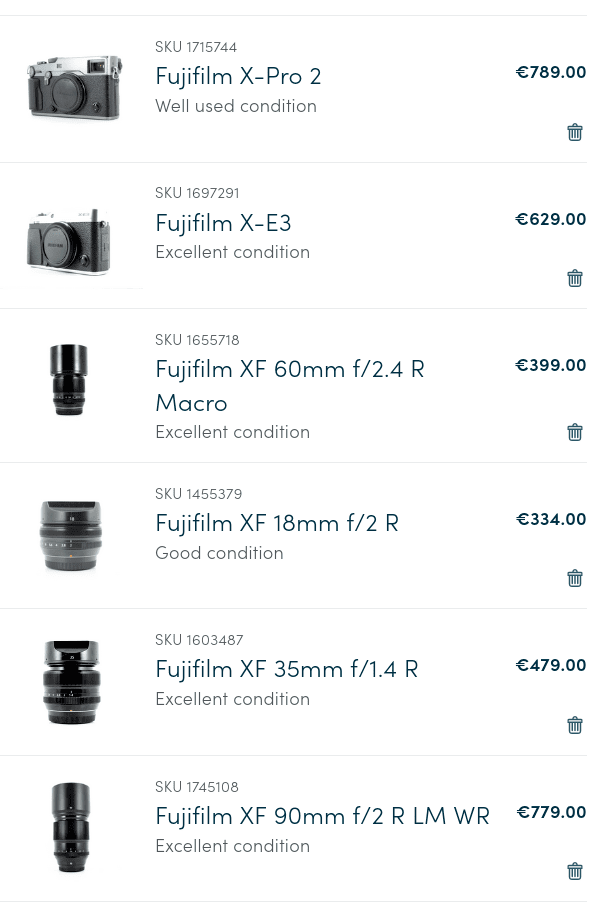 That 135mm is a hefty piece of glass.

But it's going to be capable of beautiful images.

TNcasual said:
That 135mm is a hefty piece of glass.
Click to expand...

I wouldn’t have a use for it.

Bobby Tingle said:
I wouldn’t have a use for it.
Click to expand...

Supporter
Forgot about this for a while, but I have some real fantasy gear I would like to see produced, namely a weather proofed pancake zoom for M43, preferably a 12-40, or in a pinch 12-35. Sized to be no larger than the 14-42 PZ, with the punch of the 14-42EZ.

It wouldn't be a hard sell, if they made up a series of weatherproofed primes at f:2.8 either, after horsing around a bit with the Oly 17 f:2.8.

I am obviously not a lens designer, but looking around on what has been, or are up for grabs in the pancake dept. There are at least a couple of options that points to the possibility/feasability of getting the entire classic lens trio made in a pancake design, we already have the 14, 17 and 20mm. Oly made a 25 mm for the 4/3 system and I think both pentax and canon have 40mm pancakes in their line-up. F:2.8 for sizing matters, the 14 and 17 mms are proper small and unobtrusive at about that value. The 20mm is, compared to the others somewhat of a size beast, relatively speaking.

No worries about anything fancy, manually operated by twisting on extension and ditto for zooming would be suitable, as would a simple fly by wire manual focal adjustment but with fast AF and good glass. Simple, durable and competent.

Pancake m4/3 primes are the bee's knees, as they say... If they made updated versions from 14mm up to 25mm I would be all over that. As it is I'm thinking hard about reaquiring the 14mm f2.5 for use on the EM5II.

Epicurus and the gear acquisition syndrome