Supporter
Looking at possibly getting a film rangefinder.

Was poking through Flickr, and I found this photo, which I actually quite like. The photographer identified as Eran Peterson title it "Coffee" 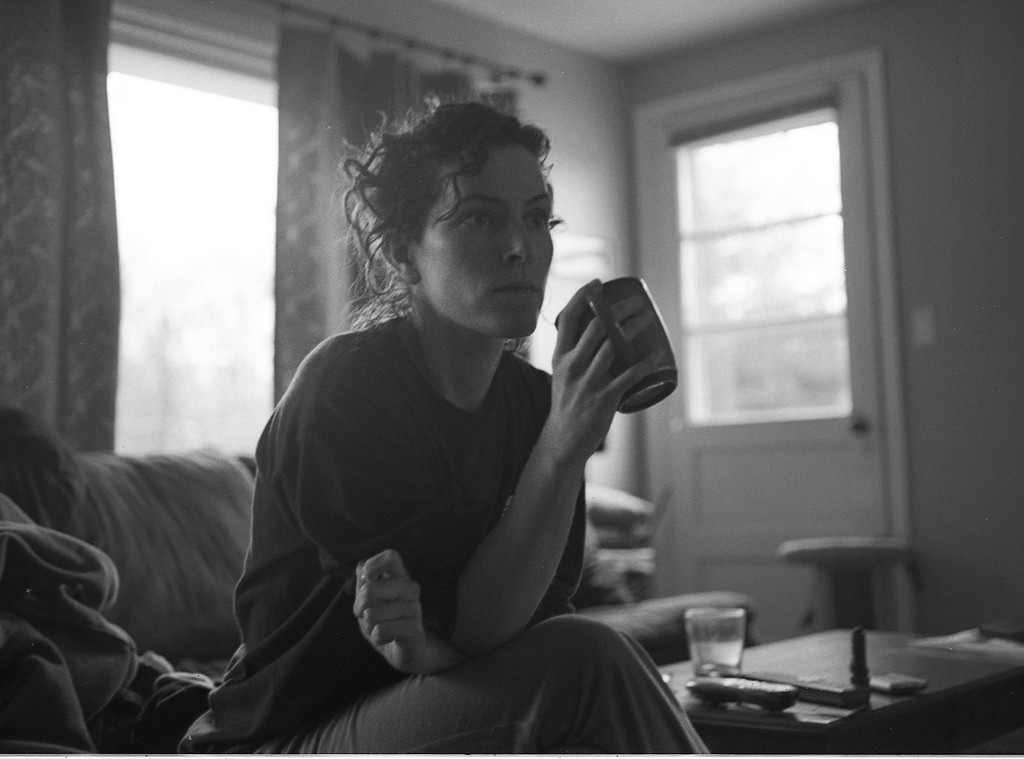 I've read all the charts and math stuff and everything else theoretical on DR for my m43, and other cameras, but in this shot, do you think if this was a digital shot that either the windows would be totally white, or the face would have been darker?

Does anyone have any references or resources that actually show samples, as opposed to DR curves, etc., of digital vs. film DR

I'm finding a serious limitation to the theoretical stuff for my learning. I really learn by studying examples.

I think that the nature of modern digitals is to shoot with increased contrast whether by camera default or by user settings. For instance, being myself a child of the digital age, my immediate reaction is, "lacks contrast".

Supporter
That was my thought, certainly. I do wonder, though, if film would be a bit more freeing. If I shot this in digital, I would immediately feel compelled to brighten her face, play with the levels, etc. I would (and am!) getting so hung up on the technical aspects of the photo, that I would miss the story.

I think this is exactly the kind of photo people might really enjoy 50 years from now. This is great slice-of-life shot (IMO) -- it's clearly the morning. She's not yet up. Is she listening to someone, or watching TV? The remote is near her, so TV is likely, but I can't be sure. There is enough detail in the window to draw my eye outside, and makes me wonder what the season is. I can't really tell. But I can smell the coffee. And with the low angle, it kind of feels like a childhood memory of mom in the morning.

Maybe I'm rambling, but I'm finding a stronger draw to the imperfect lately, and away from digital perfection (maybe that's why I loved my EP1 for two years until it died recently).

Nic is right. The image is flat. Years ago I experimented with shooting film, processing the negs myself and then getting high res scans made.
I tried everything to get a result I could live with.
Now I just use the X100 and other digicams as the results please me.
I haven't missed film for years.

Bill, you're entering dangerous territory, my friend :smile:. Are you liking the image and then liking the idea of film by association? I would argue that if you dialled down the contrast on digital, did a bit of PP, even used an older, softer lens, your results would look little if any different. Numerous times I've complimented someone's (digitally generated) photo on flickr by saying "it looks like old film", by which I usually mean it looks a bit faded, low in contrast, a bit soft, etc. My personal, relatively uneducated view on film is: love it for the process, not the end result.

Moderator
Buy a fixed-lens RF and try for yourself.

With Digital, try a low-contrast lens for monochrome.

Supporter
I posted this same question on FM. This was an interesting article someone posted as a reply:

My real issue is I sold my 5D, and I want a full frame compact that costs less than $5K. That means film. I'd try the X100 if it were 50mm. I never really got into 35mm. So, I am exploring a digital RF -- maybe with a fixed lens, and see what I think. Just waiting to find a good one for sale somewhere. If I like that, I might move to like a Bessa with M-mount, as I like the rendering of the Leica lenses I've seen.

I think Nic nailed it here (even though I'm now keen to look over his feedback on some of my photos ) . The content may be flavouring the perception of the technical detail a little in this case. Granted that film has more latitude and that a digital take of this image might have clipped and blocked some zones in this scene, but I believe if the exposure was nailed (as it would have had to have been with the film shot) then there'd be enough detail to achieve similar. Actually, the digital take would certainly have caught more micro-contrast IMHO and we have the benefit of drawing more out of a single (or even better bracketed) RAW file and exposure-blending if, and as, required to achieve latitudes well beyond film.

I'm a bit of a romantic when it comes to using film - and look back and wonder if I could achieve what they did before digital if I went back to film. But having used the Ricoh GRD, the Sigma DP series and now the X100, I think a lot of this is simply down to nostalgia. Hence, I value Don's take here.

That and having spent enough time around folks who process film and listening to what's involved in achieving what looks like a simple exposure. But then realising its the culmination of years of experience to know how and when to push and/or pull film, cross-process or dodge and burn in the wet-room. I fear I'd be in retirement before I had the nous to achieve in the darkroom what a few minutes with simple curve adjustments can deliver me in the lightroom.

P.S., having looked at the shot again, I have to agree it is thoroughly engaging. But photos are a uniquely human phenomenon and rely on our ability for association of symbols - (very) essentially associating lines in a two dimensional space with reality in a third. Since we, as photographers, draw on a catalogue of personal associations we can never quite nail how our images will be perceived by other persons. But now I look at this image and I am struck by one fact, the similarities between it and Dorothea Lange's "Migrant Mother". 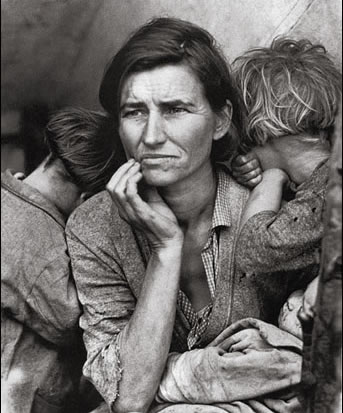 Subscribe to see EXIF info for this image (if available)
It's not only the structure of the face, the far-off look, the lay of the hands, etc., etc.,....but even your association of her as a mother - and yet she is not cradling a child but a coffee cup. I wonder how much of the strength of this image is down to the subconscious associations we have with other catalogued photos?

wt21 said:
I want a full frame compact that costs less than $5K. That means film. I'd try the X100 if it were 50mm. I never really got into 35mm. So, I am exploring a digital RF -- maybe with a fixed lens, and see what I think. Just waiting to find a good one for sale somewhere. If I like that, I might move to like a Bessa with M-mount, as I like the rendering of the Leica lenses I've seen.

Hey wt21, funny thing is I'm having the exact same thoughts as you.

The reason I'm looking to film and m-mount cameras is because I have the k5 and various lenses, but I've just recently started shooting with a Canonet QL17 fixed lens rangefinder and I'm loving it. I like the shallower DOF for bokeh, small size and relatively light weight, and the all metal build quality. I've also seen some amazing photos, specifically interesting lens rendering (from Leica, Zeiss and voigtlander) and beautiful colours from film, which are hard to replicate in photoshop.

I'd recomment trying out one of the older fixed lens film range finders like I'm doing, and see if you like it - it'll save you potentially save you losing a lot of money from buying and selling a Bessa and lens. (Canonet cost me £90, bessa would be £800 inc an ok lens)

The downside is that leica m and shooting film is expensive to buy and process. I just wish that camera manufacturers would stop beating around the bush and that someone would just release a cheaper full frame digital rangefinder alternative to the M8 and M9.

Supporter
The Canonet is one that some folks have recently pointed me to. I guess they take mercury batteries that are illegal in the states, but I understand you can have the voltage regulator reset or some such.

I've spent most of the weekend looking for my ME Super, which seems to have been misplaced. I was thinking of trying that for a bit (haven't shot with it in over 15 years), but I can't seem to dig it up, after annoying my wife by tearing the house apart

Oh well. Maybe I'll check the bay for some Canonets.

Hi all,
Last year I bought a voigtlander Bessa L with a 15 mm fixed lens. This little beauty has no viewfinder but uses an eye piece. It's amazing and I get a feeling of the old days when it's in my hands. It has been plenty contrasty for me and the tone is right on. Having said that, I am no expert with m mount lens, but do admire this shooter.
Probably no help here, but I've enjoyed everyone's remarks. 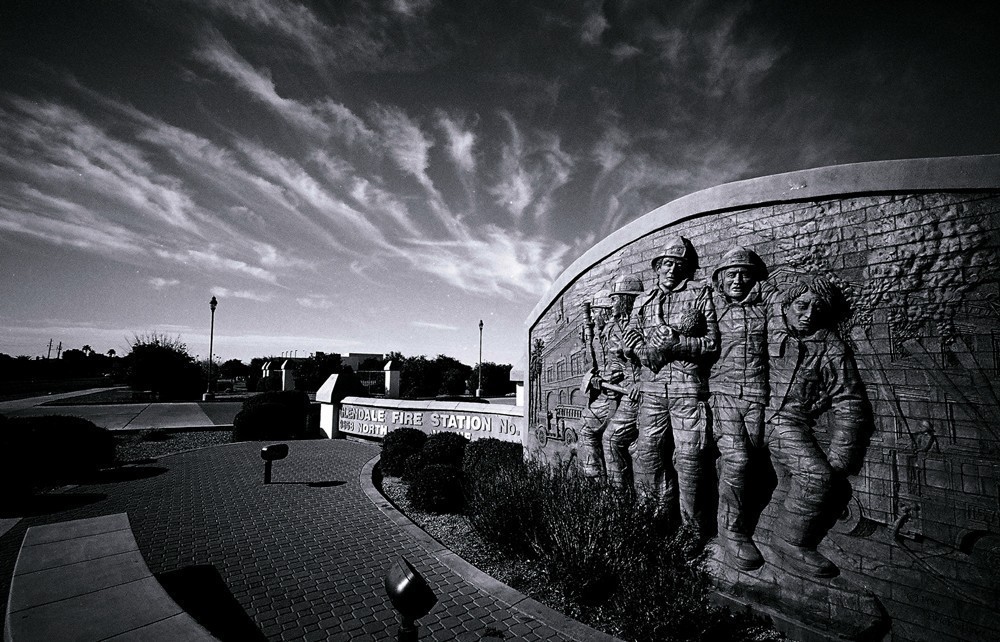 wt21 said:
The Canonet is one that some folks have recently pointed me to. I guess they take mercury batteries that are illegal in the states, but I understand you can have the voltage regulator reset or some such.

I've spent most of the weekend looking for my ME Super, which seems to have been misplaced. I was thinking of trying that for a bit (haven't shot with it in over 15 years), but I can't seem to dig it up, after annoying my wife by tearing the house apart

Oh well. Maybe I'll check the bay for some Canonets.
Click to expand...


Hmmm mine uses an energiser akaline battery and it seems fine. See here, just below the photo of the back of the camera: Canon Canonet GIII QL17 - Photoethnography.com's Classic Camera DB

Also I just thought that tonal graduation depends a lot on film type, for example potra NC is less contrasty than Velvia.

EDIT: a heads up for buying used, very old film RF's, like the canonet, as well as checking shutters and metering, make sure that the split viewfinder image is acceptable. I tried out a few other rangefinder when I bought mine and some were so dull focusing was impossible, whilst a Hi-matic 9 was perfect (but the meter was dead). Getting rangefinders brightened is a process more expensive than buying these old RF's, so getting a good one is ideal.
A

You could probably take a similar image with a digital camera with a decent sensor like the Canon 30D or 40D, a Sigma compact, or definitely with the 5D Mark II, underexposing a tiny bit to leave in the highlight detail, then convert to monochrome and bring out shadows while decreasing contrast. Come to think of it, I've done something similar with a few M9 photos and the Voigtlander 35/1.4, which has a soft, slightly dreamy quality when wide open.

If you're shooting with film, scanning is going to be a big part of the process if you want to display your work online or email it, and by all accounts, good scanning can be a very involved skillset as well. I've seen minilab scans of black and white film blown away by home scanning in terms of recovery on highlight and shadow detail, but this takes time and experimentation.

Much of this is personal taste. When someone says, 'there is nothing I can do with film that I can't do with digital', you have to consider what they like to do. I haven't done enough experimentation to be able to say that I cannot get results from digital that I can with film, but I'm getting closer.