The good news is that both sets of owners seem to like their cameras so you can't go too wrong with the recommendation.

Congrats on the new camera Sue!!

I went by Wolf Camera today and got the VF-3...it does lock on, the image is not quite so clear or big as that of the VF-2, but it is good deal slimmer and far more secure...
VF-3 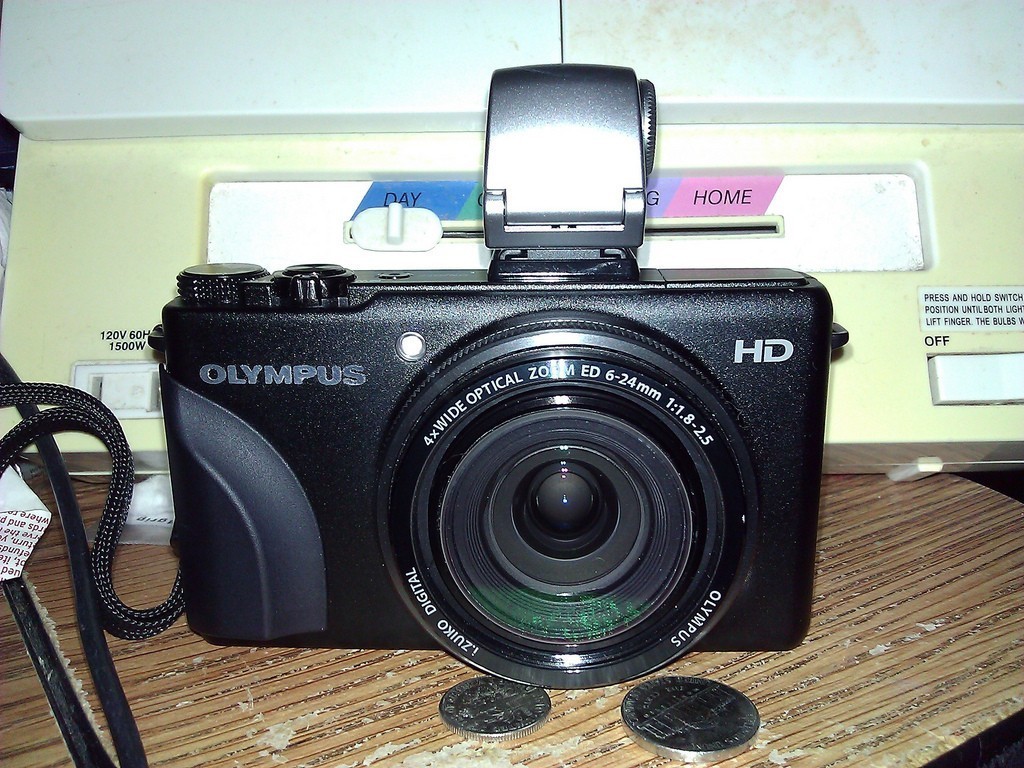 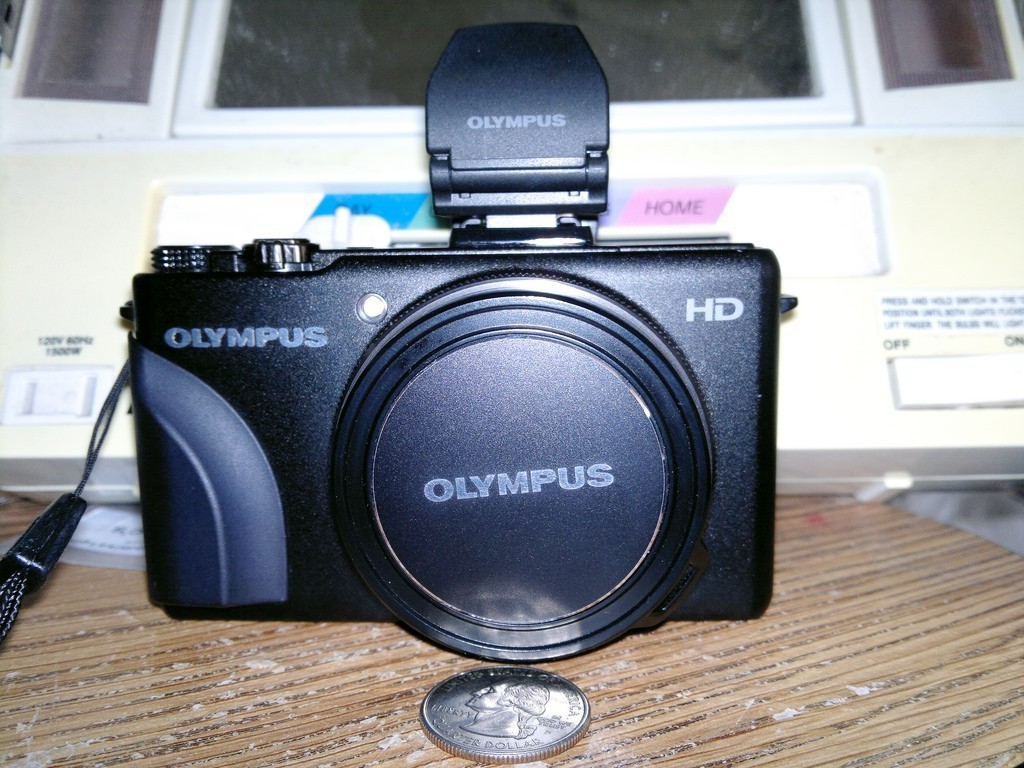 I also played with and was sorely tempted by the X10

Thanks everyone for the feedback. After a slow start this actually turned into a good conversation. As it turns out, my brother went for the Nikon P7100. He took it on vacation the day after he got it... and a few days later the zoom jammed in the open position. Maybe he should have listened to me. . But B&H made good, shipped him a new camera and even comped him an extended warranty for his trouble.

Tough call, Biro, however it's wonderful to have choices - keep us posted!

your brother made a fine choice, depends what he wanted. maybe low light performance and sharper lens wasn't something he was after and flexible lcd and longer lens range is more important.

As long as XZ-1 and X10 are concerned, following is my observations:

Advantages of X10:
- extremely fast performance in every category, AF, shutter lag, disk write speeds, everything (XZ-1 is not bad either, you wont feel any problem.. but X10 is lightning fast)
- beautiful tough black body, (though XZ-1 has its own charm, I like the white shell, though X10 is at X100 standard that means over the top).
- Better DR flexibility on EXR mode and generally due to slightly bigger sensor.
- Less noise (CMOS sensor)
- very good control layout, everything you want is right there under your hand. lets say you want to change focusing to MF, just switch the button from front of the body, on oly drill down the long menu. For ISO set the Fn button. To set Exposure there is a complete dial just for setting Exposure (well its too much for me, but still). Nice zoom ring next to the lens itself that turn the camera on too. very little clever things.
- OVF ( I don't care, never used it while I had X10 ), though X10 OVF is much better than competitors and still useable.


Advantages of XZ-1:
- slightly brighter and sharper lens (you can't beat oly on lenses)
- much cheaper (specially with rebates, here in UK) 40-45% cheaper
- complements oly m4/3 exchange accessories
- white orbs are very rare and very small comparatively
- smaller and lighter body, thanks to "No OVF policy"
- I like oly metering and AF accuracy
- Overall menu system is less confusing (thanks to straightforward and simple operations of sensor technology)
- at base ISO expect better IQ (thanks to 10MP CCD) from Oly XZ1 (but at higher than 200 ISO fuji X10 gives better results and specially if you are not using RAW on Oly XZ1)
- Oly XZ-1 raw is well supported in PS and LR etc, Fuji X10 will take its time.

It boils down to individual's taste, I returned my x10 and going to keep xz1
I

Naveed Akhtar said:
Back to the topic of the forum, I just returned X10 yesterday with tears in my eyes for its WDS bug. Search on that guys before committing to it. Or wait till Fujifilm fix it and then get it immediately, as the camera is amazing, in almost all fronts.
Click to expand...

I feel for you Naveed, I just returned my X10 for the same reason. It was a magnificently built camera, solid, good looking, had so much to offer yet I am the kind of person that likes to crawl on the ground and shoot the sunlight through dewy blades of grass or catch the surface of a lake, sparkling. I could not fathom altering my style of shooting so like you my philosophy is wait to see if they fix it. If so.. I can always think about it then.. but for now I need a vacation back-up to my dlsr, something more pocketable. Have you tried the Ricoh GRD IV yet? Unless of course you want zoom or HD video I would recommend looking at one.

Just an FYI, Naveed, the latest edition of Lightroom supports the Fuji X10.

Here's a link to our thread about Lightroom's latest: https://www.photographerslounge.org/f13/new-releases-lightroom-3-6-acr-6-6-a-5208/

Hi Isoterica thanks for the response, yes I considered GRD IV, but I really like different focal lengths and my favourite is 40mm as it gives good enough isolation to the subject but with plenty of room for some interesting background. It is not easy to compose with wide and ultra wide lens, where you have to link up too many subjects in the story otherwise instead of making a good impact, actually the whole effort goes into negative. That's why my favourite gear is GH1 with 20mm f1.7, nice sharp and bright

The bigger advantages of ricoh, I think I can live without. I have experiemented my travelling in so many different ways:
- multiple DSLRS loaded with lenses
- multiple ILCs with lenses of different types and nature and some with lens adaptors
- High end compact and DSLR and once ILC

but now really find out that, carrying multiple cameras, though it helps less switching of lenses, still is not as convineant as one low profile camera. I wish if I could get a lens of apperture values as Oly XZ-1 on my GH1, I would be very happy, even if it would be bigger and expensive.

Now why I got interested in XZ-1 and X10 specially these days is because of soon to make trip to Jerusalem where I preffer to go really light, I can take my GH1 too its not that heavy but I preffer to go really low profile. Big reason is strict security conditions and how quickly everyone over there get suspicious of anything out of nothing. I got D5100 + 16-85mm, rangewise its better than XZ-1, brightness is deffinately less but with the best Sony APSC sensor so far, you can very easily get 1 to 2 stop advantage (ISO 400-1600) over little oly XZ-1 (ISO 100-400) and with that flexible range you can cover almost everything. If it would be anywhere else, I could consider it, but not in dim light churches and streets of Palestine and Israel. Also I can steal some photos when people are praying inside a mosque or church, XZ-1 and X10 can be set to mute in settings, and then no shutter noise at all. HD video is not my concern, XZ-1 is not famous for its video captures anyways.

Naveed, it would be great if you'd stop over to our Welcomes and Introductions forum and give us all as much, or as little of your background....and how you found your way here.

I look forward to seeing your pictures from your upcoming trip to Jerusalem! So will you bee bringing the X10 along with your GH1?

I am also very excited about this little trip, no X10 has gone and am taking only Oly XZ-1 with me. GH1 D5100 E-P1 and G3 can stay at home, no matter how big and better sensors they are.

Oh this reminds me I need to update my signature; no X10 anymore

I am still liking the X10 for what it is, did ok at 3200 ISO last night, only comment would that I had to leave the exposure comp at -1.3 to 2when shooting in the dark

Good to hear from you, I agree that the X10 is an extremely nice camera. Although I did send mine back, I may buy it again down the line.

I am keeping mine as a sort of general purpose camera, a grab and go

I should have and may yet, Bob.

I handled one (X10) this past Monday. had I not already fallen in love with my XZ-1 I would have opted for the Fuji
A

Hyubie said:
Hi thekeddi, may I request a side-by-side comparison if the size of XZ-1 and the X-10, and maybe just a common point of reference, say a regular paperback? Thank you!
Click to expand...


Here you are
Compare camera dimensions side by side

I have the XZ-1, which I like, and have the x-10 on the way (should get here tomorrow). If your brother wants to use jpegs and not raw, I'd steer him away from the XZ-1. The raw files are quite usable, but the jpegs have too much noise reduction applied and then aggressive sharpening applied to the resulting mush. I usually find Oly's jpegs pretty good, even if I go to raw for important stuff, but with the XZ-1 I shoot exclusively in raw; the jpegs really are that bad.
Share:
Facebook Twitter Reddit Pinterest Tumblr WhatsApp Email Share Link