Got a new Serious Compact!

I've just blown any hope of a new camera this year on a bespoke Brompton folding bike called Walter! No pictures yet ... but hoping to start commuting with Walter and my GRD3 next week so watch this space! If you've no idea what a Brompton is, just check out youtube.

Hopefully this link will work:

Karen, congrats on the new wheels. Can't wait to see your new ride!
A

Karen, I have a Brompton as well - great little bikes. Love sticking it on the train and riding around the city. I also have a GRD3. And don't you also have an X100? Birds of a feather...

Very cool indeed! Oh, wow, you do as well Ray?!

They look beautiful and that video was fantastic - loved it!

Yep, I have one, but I never wear a bow tie and tails to ride it! There is a folding bike weekend in Philadelphia every year that I've checked out in past years.

I've had other folding bikes - there's a company in Eugene that makes several models of what they call Bike Fridays. I had one of those for a while and its trying to be more of a proper bicycle that will fold up if you insist. Whereas the Brompton is more of a bit of metal origami that turns into a passable bicycle once unfolded. Its more of a folder and Bike Fridays are more bicycle-ish, but they're both pretty brilliant. But I never liked the Bike Friday as a proper bike as much as my traditional larger wheeled bikes and I love the Brompton almost more for the brilliant gadget it is than as a bicycle. But I don't ride it long distances (like I used to do with the Bike Friday) - just a few miles here and there around town or in Philly. And its perfect for that because it folds and unfolds in seconds and you can carry it into a restaurant, onto a train, etc. Shortly after I got it, I rode up to the commuter train literally as it had pulled in and stopped and I was still able to get off and have it folded in plenty of time to hop onto the train without holding things up. Its a brilliant little piece of engineering and design. I have a Brooks leather saddle on mine and I have the flat bars which are a bit lower than those standard up-sweeping bars you see in the video (there are a few flat bars in that too).

The Brompton is almost like my X100 - a slightly quirky piece of gear that I don't use as much as other bikes/cameras, but I'll probably never get rid of because they're just so bleeping unique and utterly cool.

Here it is in its three states of folded-ness, the second one is essentially its "kickstand" position - you just flip the rear wheel under and it stand on its own... 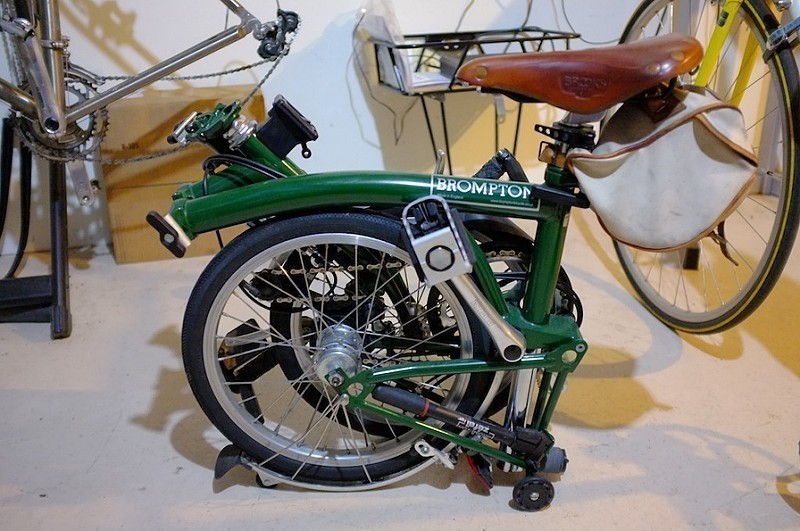 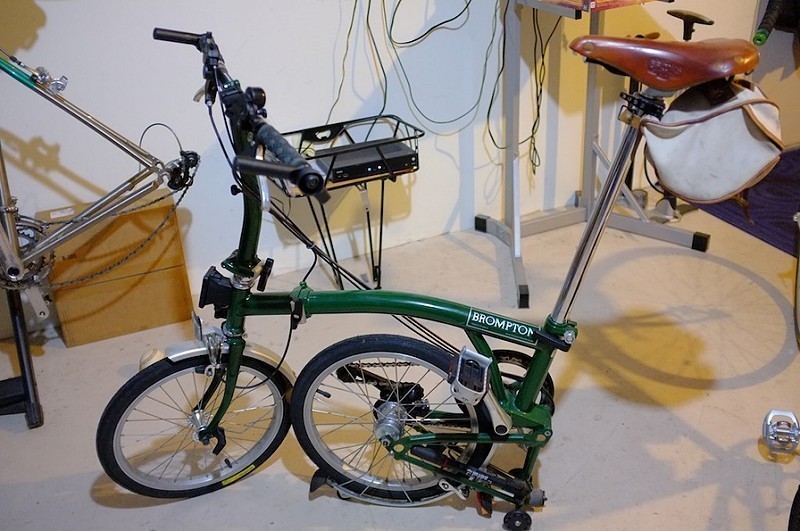 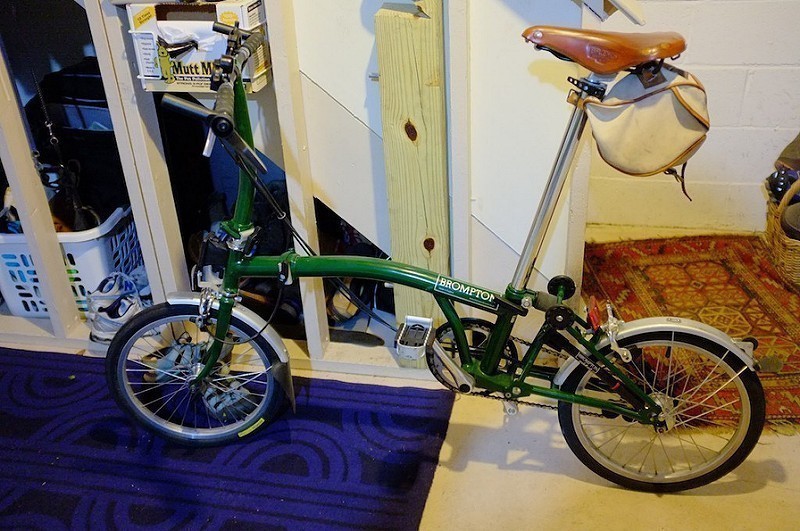 And one of the Bike Friday with its humble owner in the summer of 2001 on a bike tour in Wales. This one took about a half hour or more to really fold up and get into its suitcase for travel. Currently I have one of my full size bikes that has couplers that allow the frame to come apart and fit into a just barely legal size suitcase for travel. That takes more like an hour. The Brompton takes about 15 seconds...

That and a Naim hifi and you'd have a complete set!

Bromptons are cool; but not as cool as as a fixie.

In Scotland one should ride Bromptons in kilts. That's the way it should be done IMO

chromatin64 said:
You have to admire the chutzpah of someone who plans to cycle daily in Scotland

Bromptons are cool; but not as cool as as a fixie.

I've read of folks doing the Lands End to John 'O Groats (sp?) end to end ride on Bromptons. Usually highly customized ones with bunches of gears. But they're nuts! The longest I think I've ever ridden mine in a single sitting was maybe 15-20 miles and that was more than enough! But for the quick little 2-5 mile urban trips, they're wonderful.

I thought about converting the Brompton to a fixie back in the day, but the chain retention wouldn't work with it at all. And if you can't fold a Brompton, it's not a Brompton! I rode a fixed gear for years, more for training than as an urban bike. Although I've got to admit, the times I rode it in urban traffic, there was a flow to it that was pretty unbeatable. But I used to ride nothing else in the winter and for a couple of years rode practically nothing else. But that's a young man's game - I stopped riding them much in my mid forties and not at all in the past 2-3 years. Don't even have one built up anymore, but I still have a wheel with a fixed hub hanging in the garage. But I always rode them with a proper handlebar, not one of those tiny little bars you see on the hipster bikes. You need some width on a bar to wrestle a fixie up any serious hills and where I ride, they're generally pretty tough. Always kept a front brake on it too. I'm not crazy!

I was thinking you could make a case for a GRD or X100 as the fixie's of the camera world, but I guess they're just really fancy single speeds - way too much automatic stuff on those cameras. I guess a Holga or Lomo or an old Brownie was more like it. But in the digital world, they're probably as close as we've got...

Very cool little folding bike! I like how they started the race folded, also got a snicker out of the half suits. As for the fixies, that's what I had as a kid until I got older, but that was because.. that's all we had. =) Ah the simpler days. I currently have a Mongoose. If I was a city dweller I'd definitely get a Brompton.

If I didn't live in the city I'd definitely ride a bike. After having some d-bag (that I made eye contact with in their side mirror) open their car door into me (with a city bus 100 feet behind me) I realized how fragile live is on the street when you're not surrounded by a sheath of metal.

The best offense is a good defense, but so many bad drivers make it hard to defend against them all. Keep your wits about you and watch out for absolutely everything. Even when you think someone sees you, they will forget 1 second later. Trust no one.....and enjoy your ride!
M

Luke said:
If I didn't live in the city I'd definitely ride a bike. After having some d-bag (that I made eye contact with in their side mirror) open their car door into me (with a city bus 100 feet behind me) I realized how fragile live is on the street when you're not surrounded by a sheath of metal.

The best offense is a good defense, but so many bad drivers make it hard to defend against them all. Keep your wits about you and watch out for absolutely everything. Even when you think someone sees you, they will forget 1 second later. Trust no one.....and enjoy your ride!
Click to expand...

Yep I commuted for 20 years by bike and had a few confrontations with drivers. Love the Brompton though. Great for sticking in the car and going off-road.

Thanks for the Video Karen and well done to you buying and riding one of those ; if I was fit as in my younger days I'd love one too...no petrol worries there!!!!!

Get an engine and burn some "fossil" fuel