One of the great advantages of the 27mm is its diminutive size. Albeit more of a drop-scone than a crepe, it is a pancake lens and hence small enough to be quite discreet. It is however, alone in the Fuji lineup in being supplied without a lens hood. Is this because it is superlatively good at resisting lens flare?

Sadly not. "Ye cannae fight the laws of physics" as a Scotsman once/will said. It is by no means horrendous, but flare is there, under specific circumstances.

So, there are times when a hood would be handy, particularly in the raking Autumn sunshine. I've been experimenting with two screw-in E-39 alternatives, both of which do the job, and both of which I happened to have in my photographic man-drawer. The first is a Leica 12550 hood designed for the 50mm Elmar-M. By far my favourite lens on Leica M bodies, the tiny Elmar - which is collapsible - does actually happen to be superlatively good at flare resistance, so this hood tends to be kicking around doing nothing. Option 2 is a generic, slotted hood bought on eBay for my now long-gone X-10 so also underemployed at the moment.

In use I'd say that both cut flare, the Leica slightly more than the slotted. They are both the same depth, and neither produces any noticeable vignetting. Aesthetically the Leica hood is a very good match, albeit it looks a little odd because it is so far inboard of the edges of the lens. The milling looks almost identical, however, as if the hood and lens were designed together. The slotted hood, which is larger in overall diameter, doesn't look quite so odd in that respect, but the slots are rendered totally useless. Both can be left in place, with a hood (push-on for the Leica, clip-on for the slotted) on the end, but they add considerable depth to the body and lens combination - fine if you are throwing them in a bag, not so great in a belt pouch.

There's no winner here, and I am still swopping and experimenting, but I thought you might like a look, and to read my musings thus far: 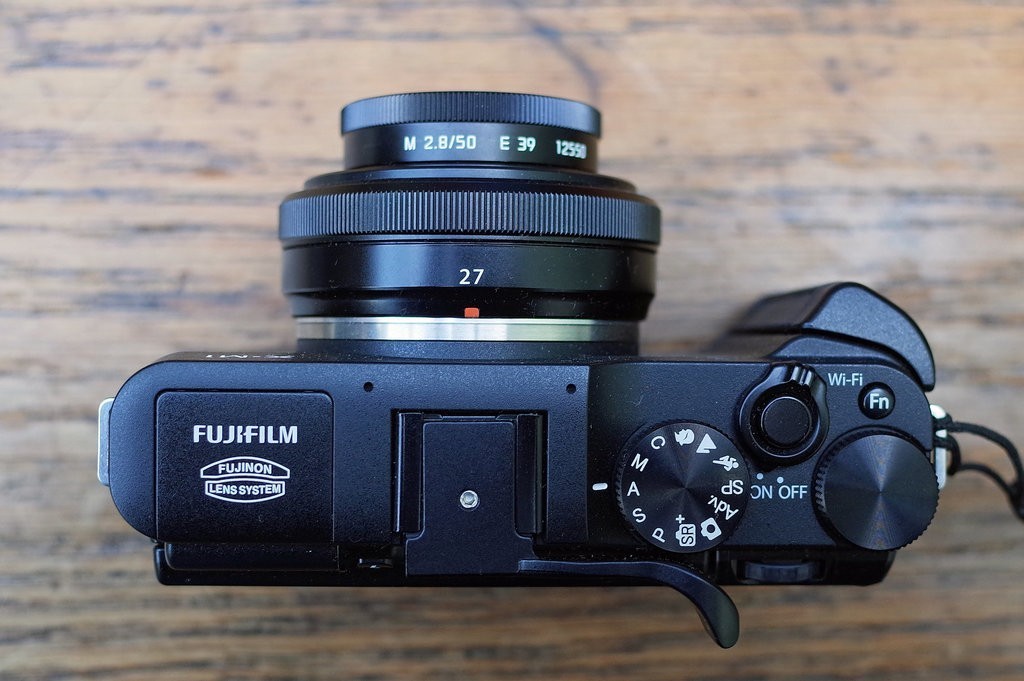 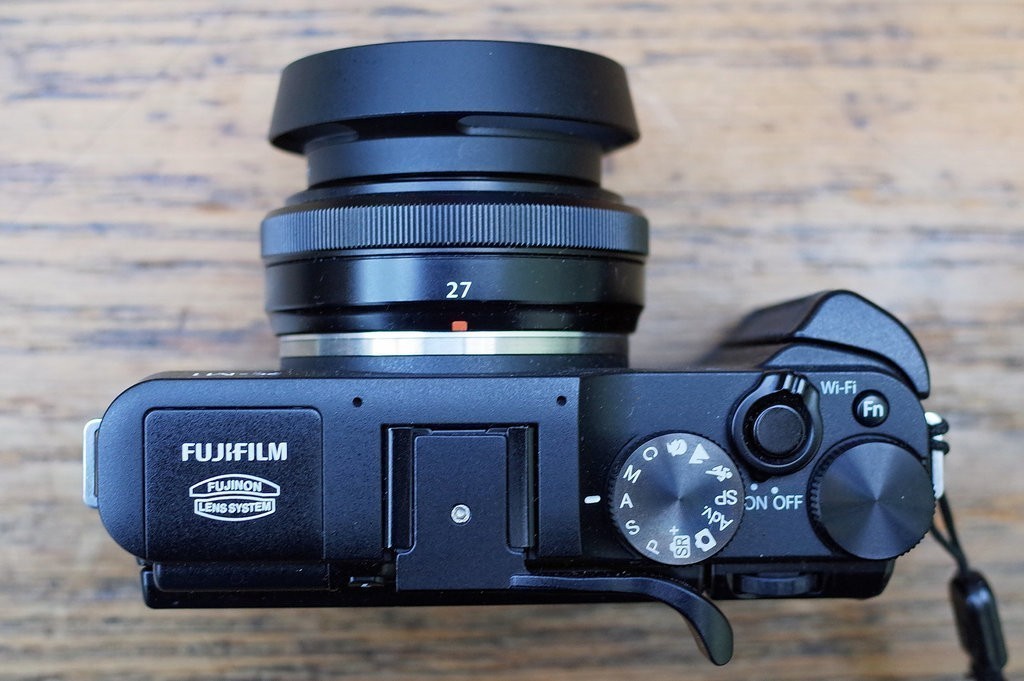 I thought about a hood like that second cheaper one, but got scared by the pressure that it might put on the moving element of the lens in my bag. I use a B&W brand circular polarizer as the protective filter on it, just taking it off when the sun goes down. Seems to work pretty well.
Upvote 0 Downvote

The vented hood seems to negate some of the form factor of the lens, it look like just a smidge smaller than the 35mm. The Leica hood does let you keep the small compact form, but as you said it does make the set up look a bit odd. I don't mind the look though, it kinda looks like a tiny zoom lens.
Upvote 0 Downvote
W

Nahh, no hoods at all, flare is welcome . That said I ilke your 1st option
Upvote 0 Downvote

No hood for me, either. I tested my PP sample in very difficult light, and the (then new) Super-HTC coating worked like a charm.
Upvote 0 Downvote

I'm pretty happy with the results of the 23/2, but it is a bit on the long side and also makes even an X-Pro front heavy.
So I've just bought a 27/2.8 and since I also care about the aesthetics of the overall package, the squarehood Squarehood for XF 27mm f/2.8, but used.
Here are a few pics showing the relevant size difference. I'll be keeping the 23/2 but the 27/2.8 should now be the lens mounted by default. 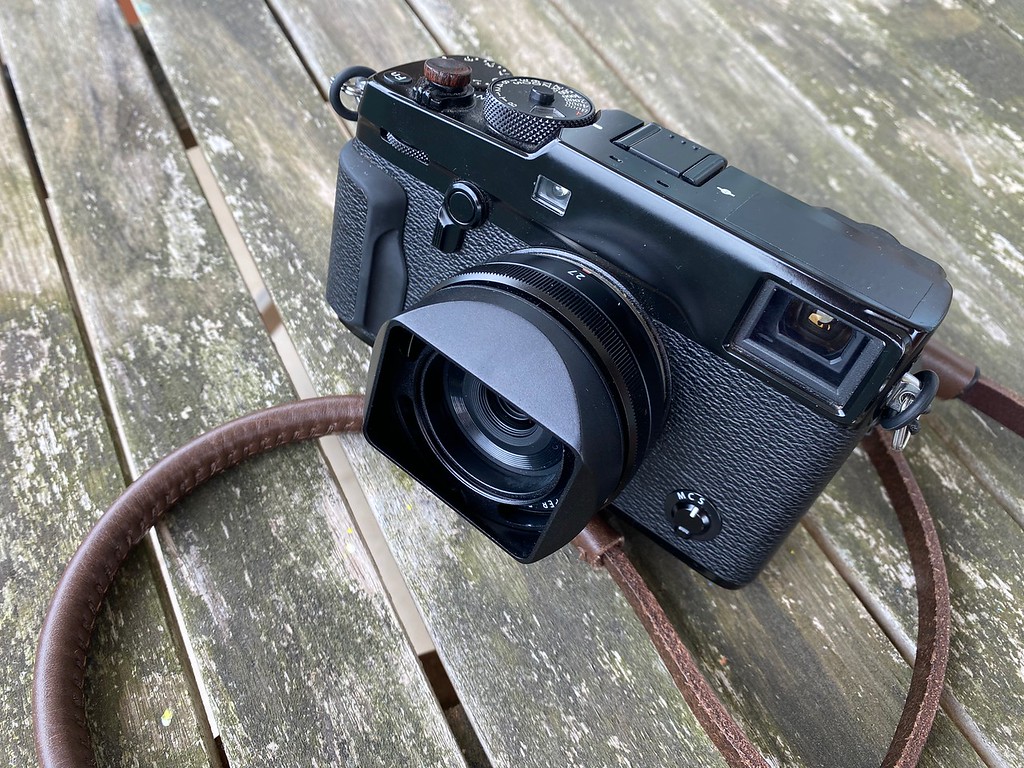 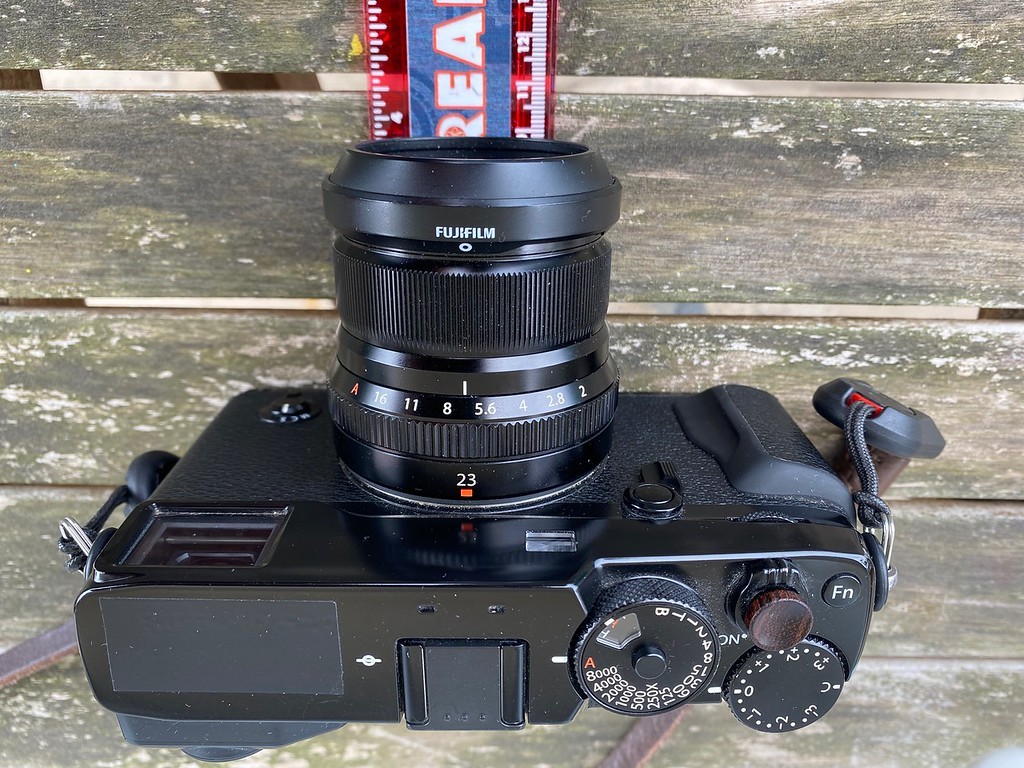 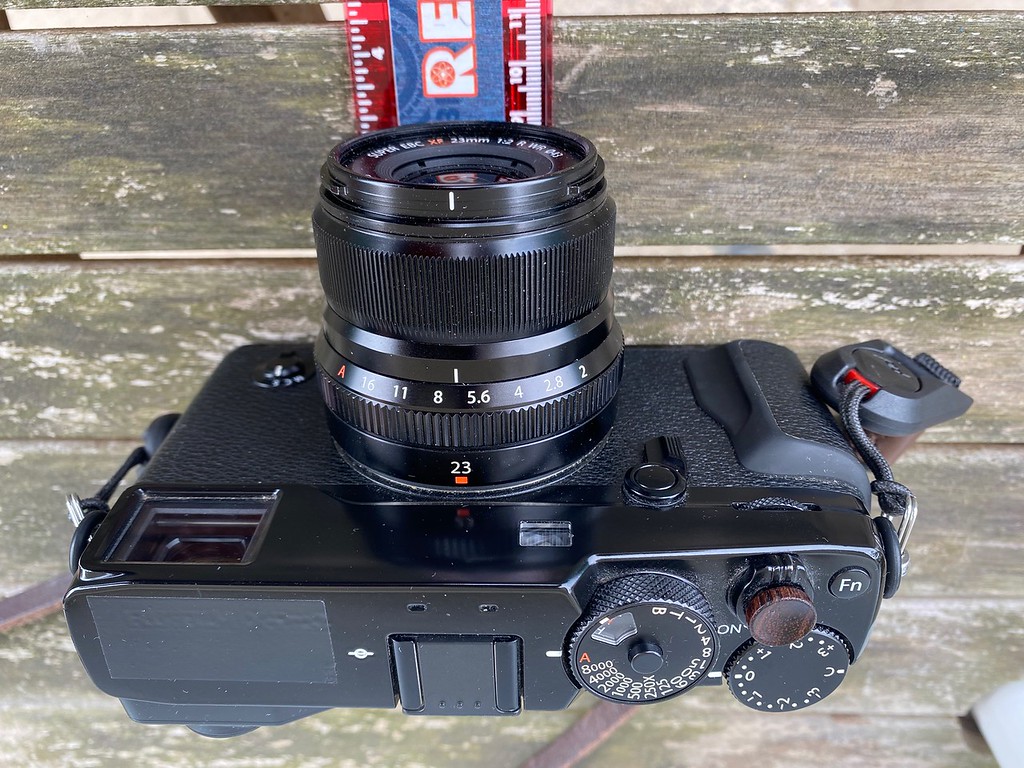 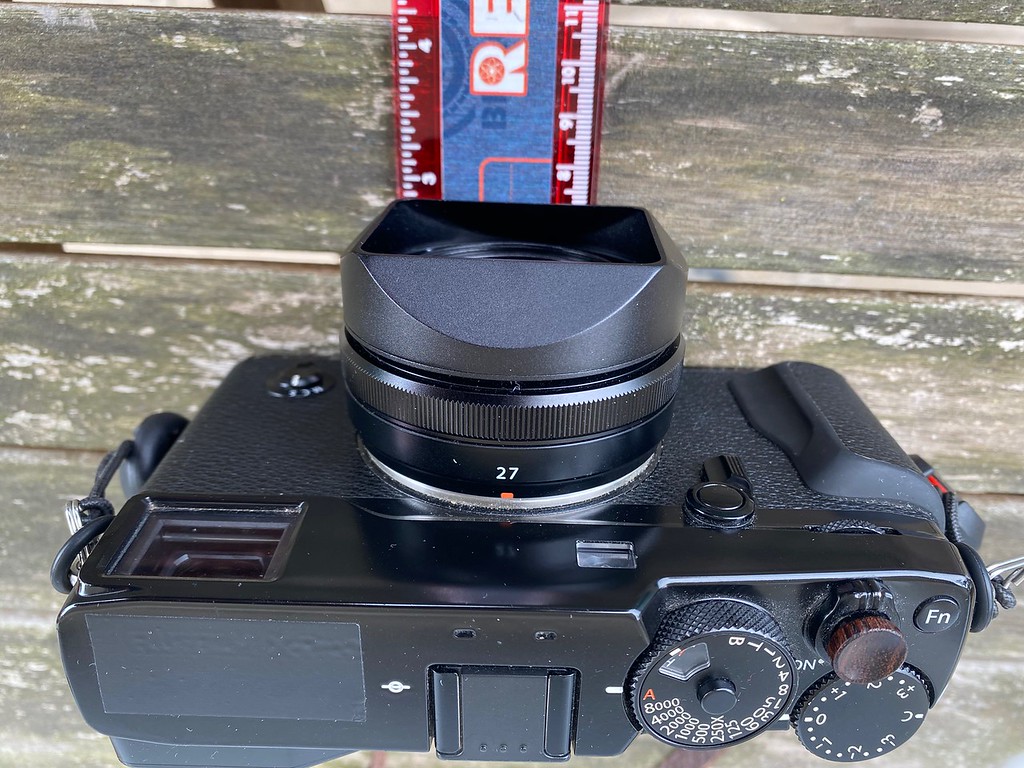 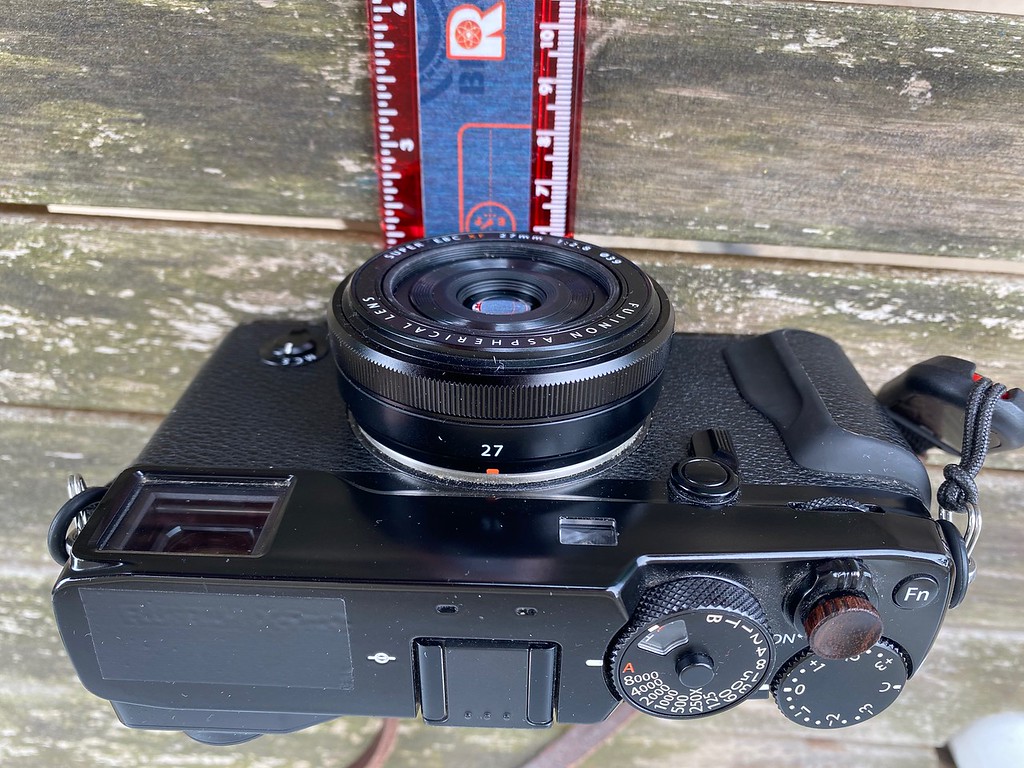 Nice. The 27 is one of my favorite Fuji lenses.
Upvote 0 Downvote

Metal vented 39mm screw in, I think I bought it on eBay for less than a tenner, does the trick just fine. 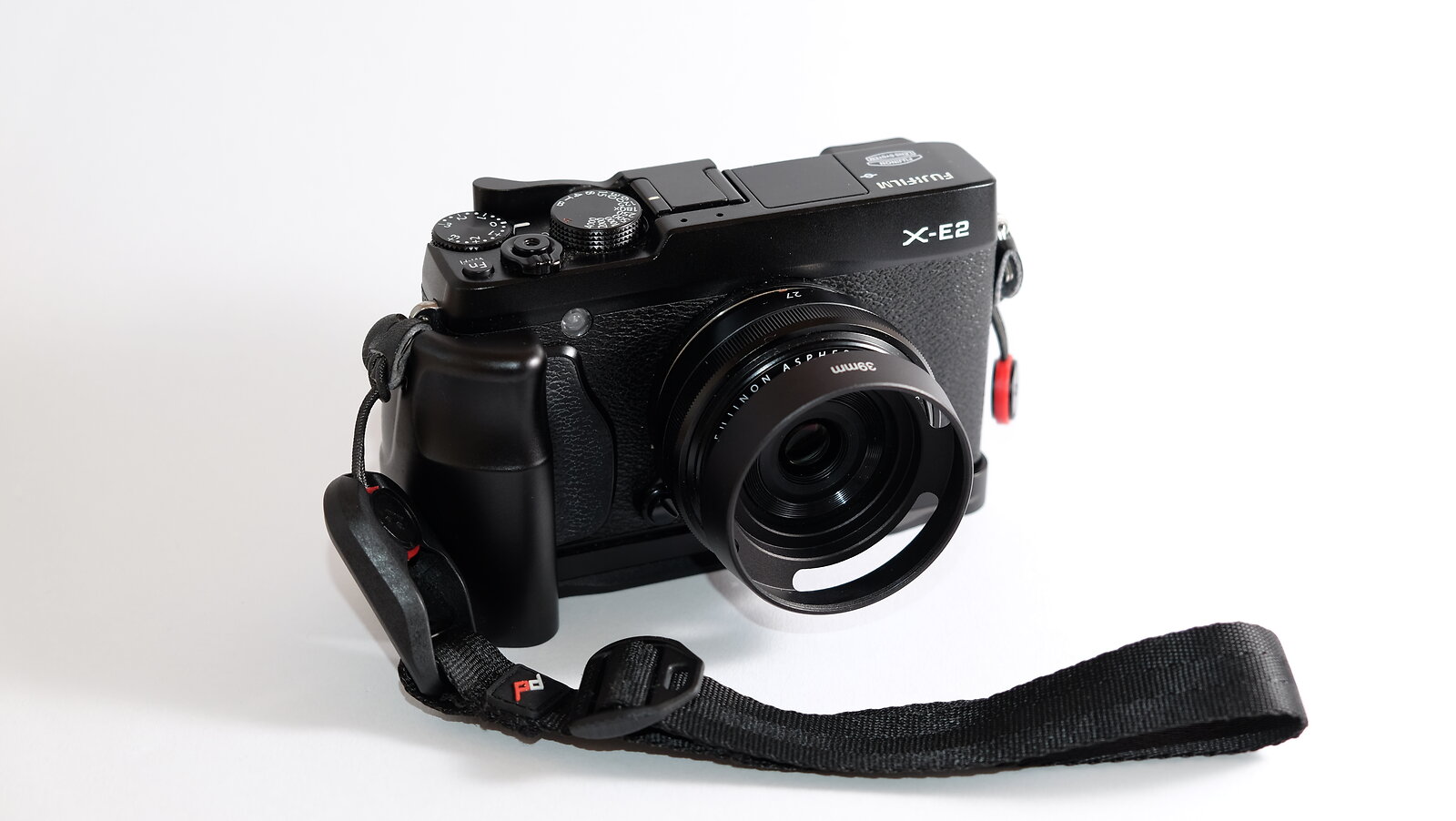