In black, of course. 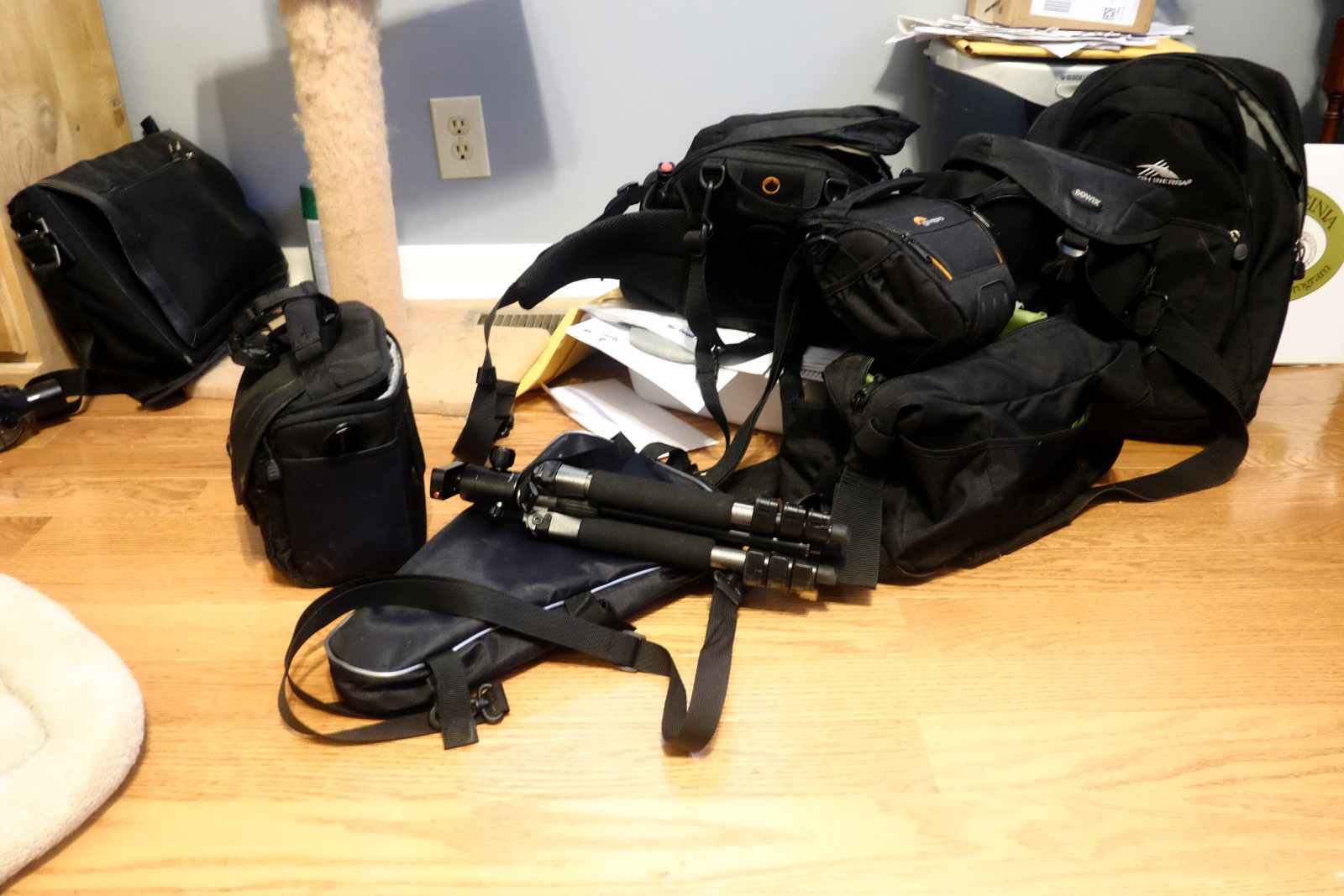 I am not sure that even Imelda Marcos had that many bags! Do you have the shoes to go with them? )

Petach said:
I am not sure that even Imelda Marcos had that many bags! Do you have the shoes to go with them? )
Click to expand...

LOL ... not quite, although I'm getting there.

tonyturley said:
In black, of course.

You do need a bag for that tripod.

I had one and lost it.
K

Tony, a man after my own heart. I think I have as many, plus one for the tripod!

kyteflyer said:
Tony, a man after my own heart. I think I have as many, plus one for the tripod!
Click to expand...

Dare I mention that another one is arriving tomorrow? I rotate through a few of those based on the circumstances, but a couple of others didn't work out as I had hoped, and one came with a camera I bought. There were a couple more I've owned that I no longer have. All black, of course.
K

I must confess to havign two which arent black. One red, (a "snoot" bag) and one sort of brownish. Oh wait. Then theres the navy blue one which I have had since 1973... OK, Not all black here

I had many, many large bags for my DSLR equipment. When I sold my E-system because I wanted a smaller system, I gave every buyer (people I knew from a Dutch forum) a pick of a bag of their choice for free (as a surprise gift; I didn't advertise with it). I even sent a spare one to Australia once (curious if Mark "stilllshunter" still uses that one).

Micro Four Thirds would be just that: a micro collection of a camera and very few small lenses in a single small bag.

Gone was the clutter, happiness awaited.

Alas I only dealt with the symptoms but didn't cure the illness. Now I have many, many smaller bags for my ever growing collection of camera bodies and lenses. I no longer sell old gear, but that doesn't stop me from acquiring new gear. Which needs new bags. And I know all the excuses. Weather proofed. Or low weight. A backpack for cycling. One for walking. Messenger style bags (yep, plural...). Bags for one body one lens. One body two lenses. One body several lenses. Prime system. Zoom system. Two bodies and a few lenses. Small bags that I can throw in my work bag. Big bags that can carry stuff next to camera stuff. A bag for the kitchen sink.

My tripod has no bag. Hmmmm.

I don't have that many bags, still learning after trial and error! I have a green National Geographic shoulder bag that isn't big enough, a tiny leather one that came free with a camera (useless!) and in the end I bought myself a "Changing Bag" from Mammas & Pappas in black quilted nylon which has done the job up until now, although the shoulder strap isn't padded and can start to become painful after a long day. I just bough a Jo Totes mint green bag..... I have to go to a wedding in a couple of weeks. It's probably the only "real" camera bag I've bought that promises to house my collection!

I really should stay out of this thread... At a quick mental tot-up I think I'm up to five actual camera bags that I use on a regular basis. Oh... no, six.

Then I have a number of Billingham Hadley (large and small) inserts. These go into non-camera bags to make them kit-friendly. If you count those it's another four or five.

Then there are a couple of briefcases...

Plus a basket full of pouches, sleeves, wraps, etc.

The new handlebar bag turned out to be too small, so I returned it. However, the bag you see on the very top, a Lowepro Inverse 100 AW, is about to get a makeover. I've used it on many hikes and bike rides, but I've never cared for the waist belt. I ordered a Rixen and Kaul Klickfix system to convert it into a handlebar bag. I'm going to slice off the waist straps, and insert a piece of coroplast behind the foam padding to reinforce the mount. I could have ordered a ready-made KlickFix handlebar bag, but it occurred to me a little frugality and thinking outside the box was in order. Stay tuned.

The parts arrived, and the bag has been converted. I used the same mounting system and process as this fellow: Turn A Camera Bag Into a Handlebar Bag - BIKEPACKING.com , although my bag isn't as high end as a Crumpler Kashgar Outpost. My reattaching of the seam on the inside didn't turn out as neat, either, but it's serviceable. Here are some pics showing before and after I chopped up the bag. Weather permitting, I plan on a 20 mile ride Saturday with the X-T1 and a small film camera riding up front in the "new" bag. 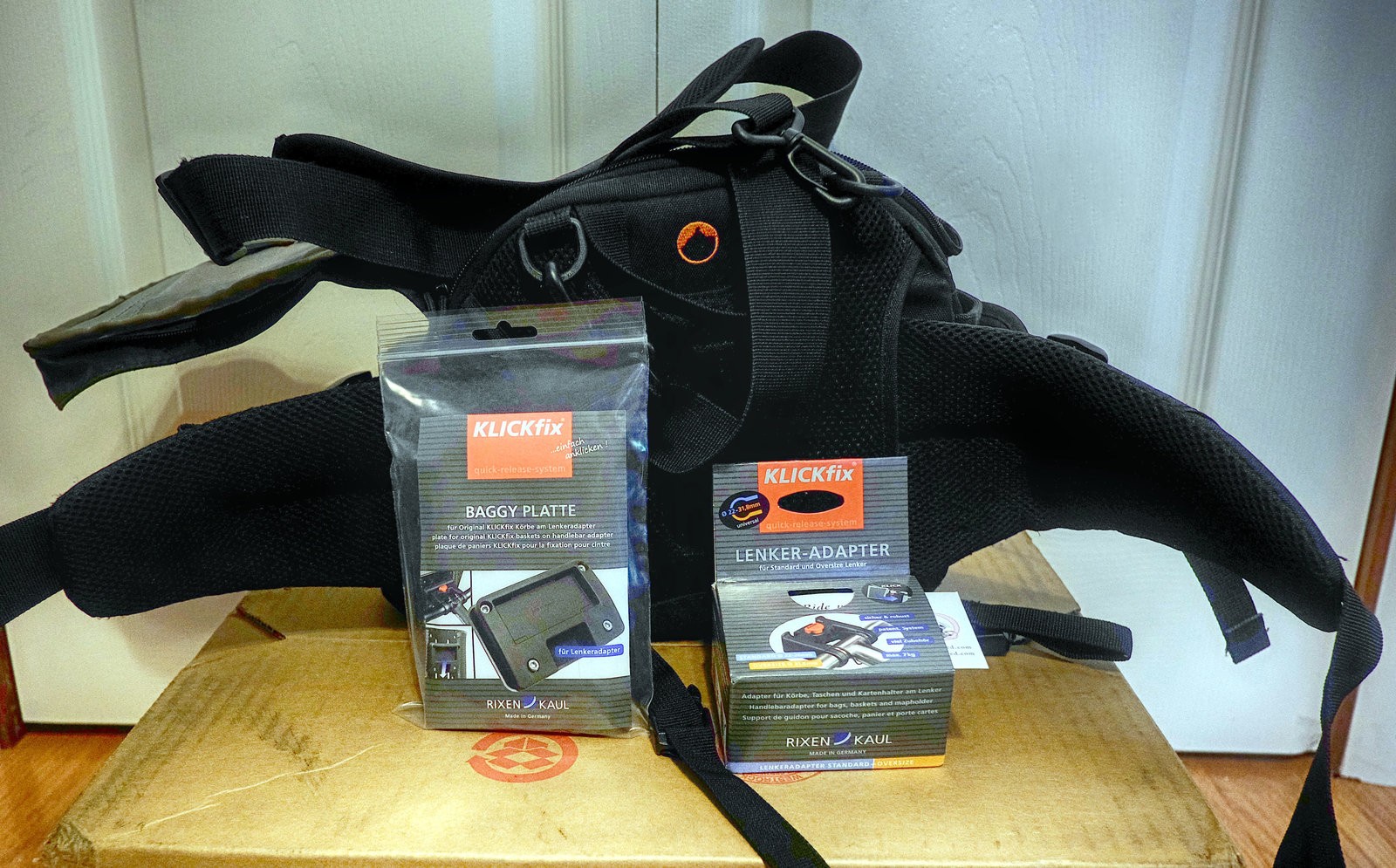 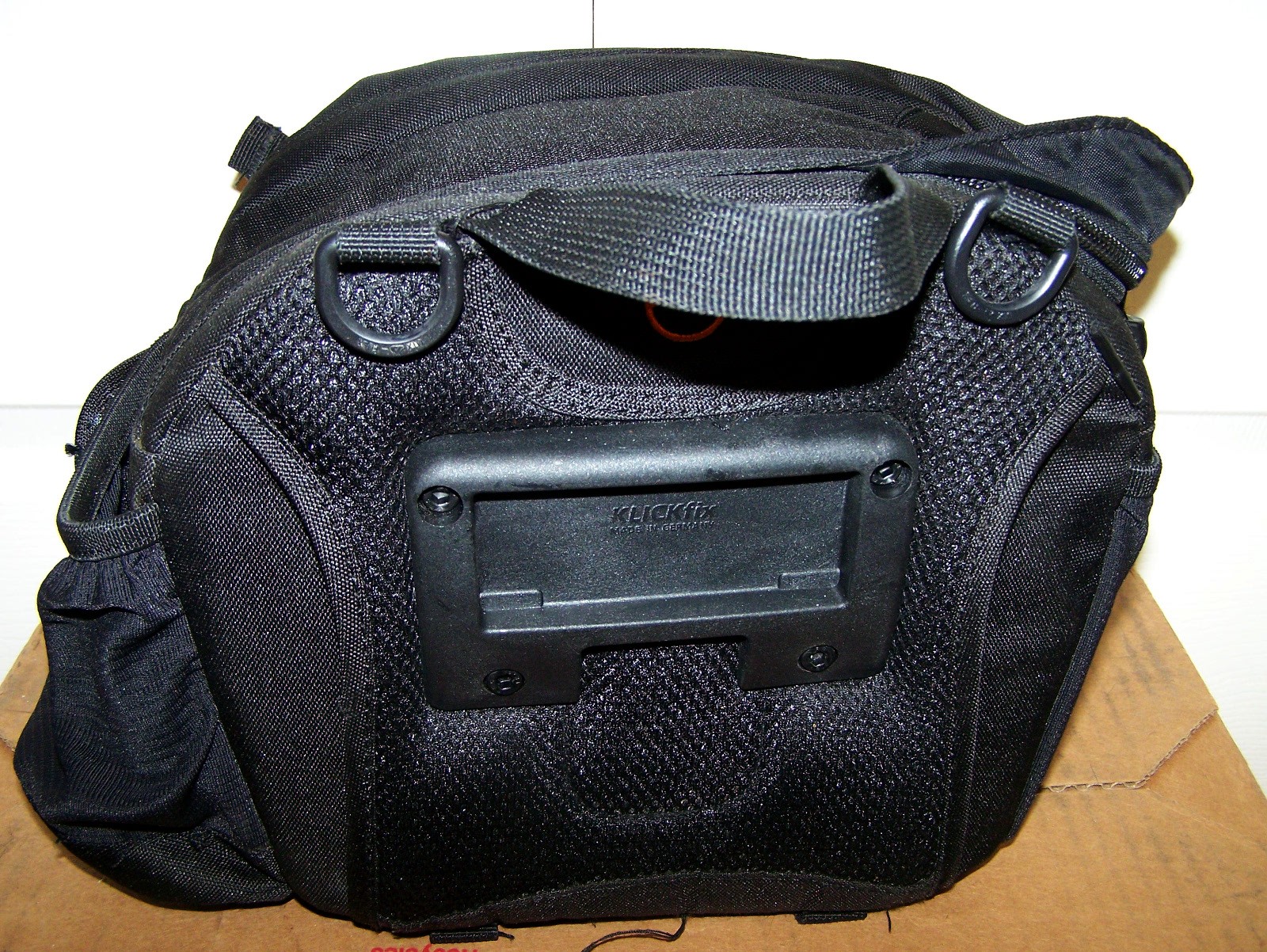 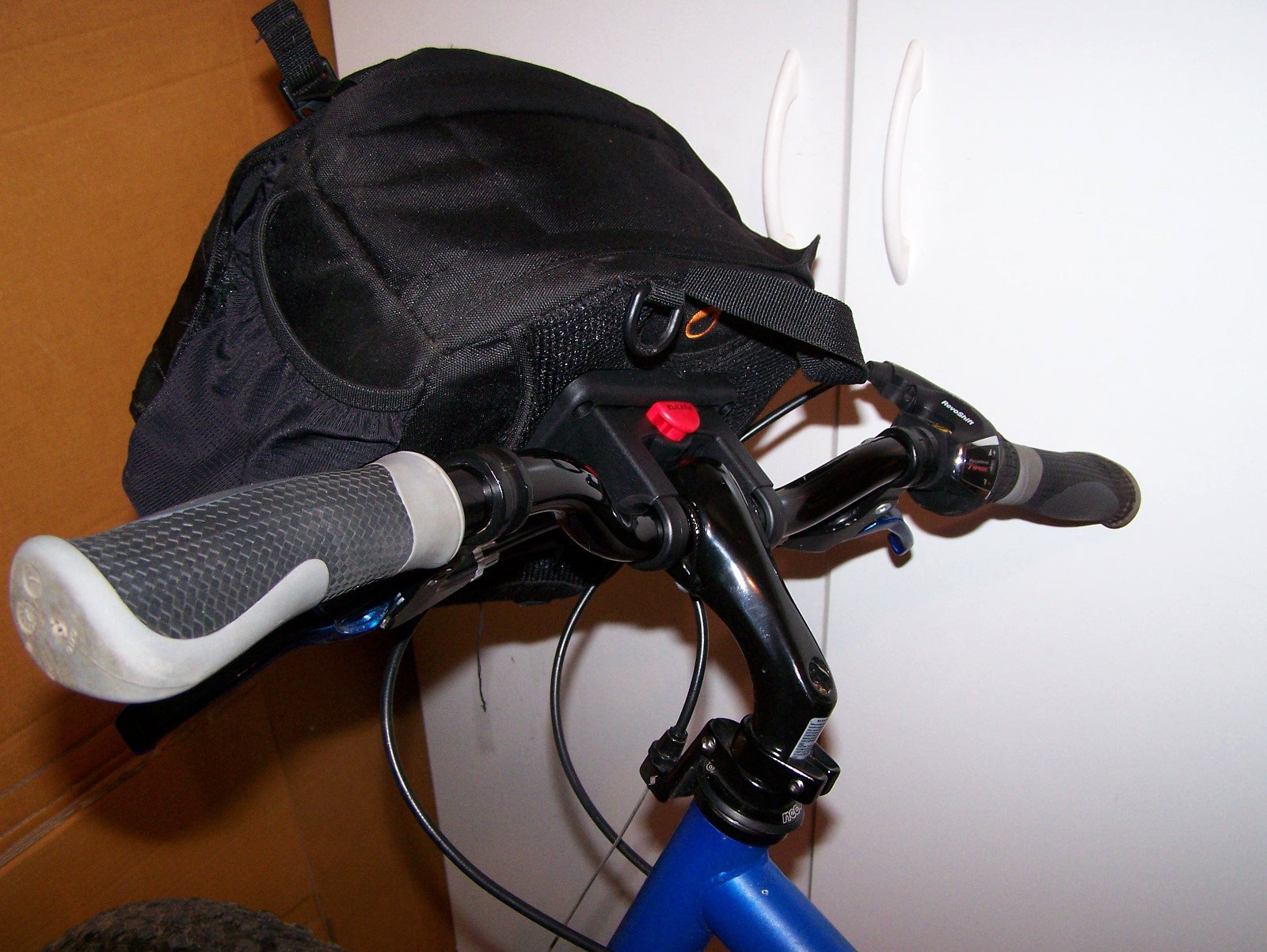 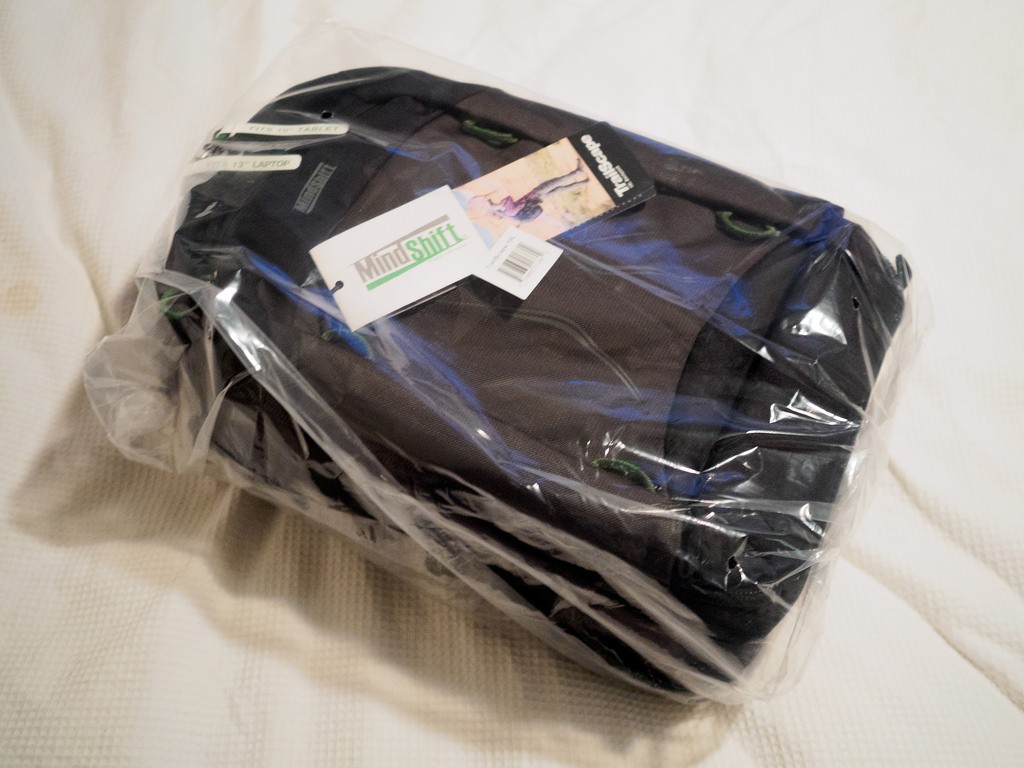 Received my Mindshift Gear Trailscape 18L backpack yesterday from B&H. Initial impressions are very positive: nice and light (1.3 kg); heaps of room for my kit; like the zippers with their large pulls, and the pockets for small things. On the downside would have liked the raincover to be attached to the bag aka LowePro and for some reason I thought this was a rear opening bag, it is not. Not the end of the world but a lesson in research properly. It turns out the Mindshift Gear Backlight 26L is the one with rear opening. It is much bigger but at 26L and 1.8 kg.

Now seriously considering a Mindshift Rotation 180 Horizon 34L or a Rotation 180 Panorama 22L as looking to complete Wainright's Coast to Coast walk in the UK and will need a way to carry my camera gear and walking gear.
Last edited: Aug 1, 2017 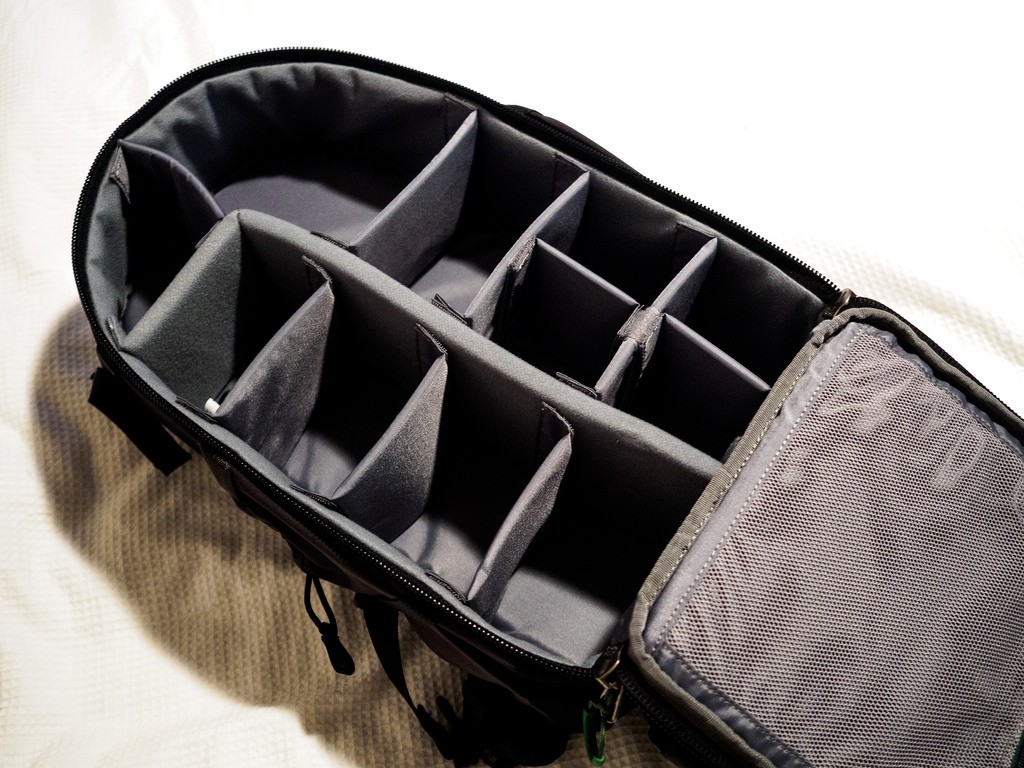 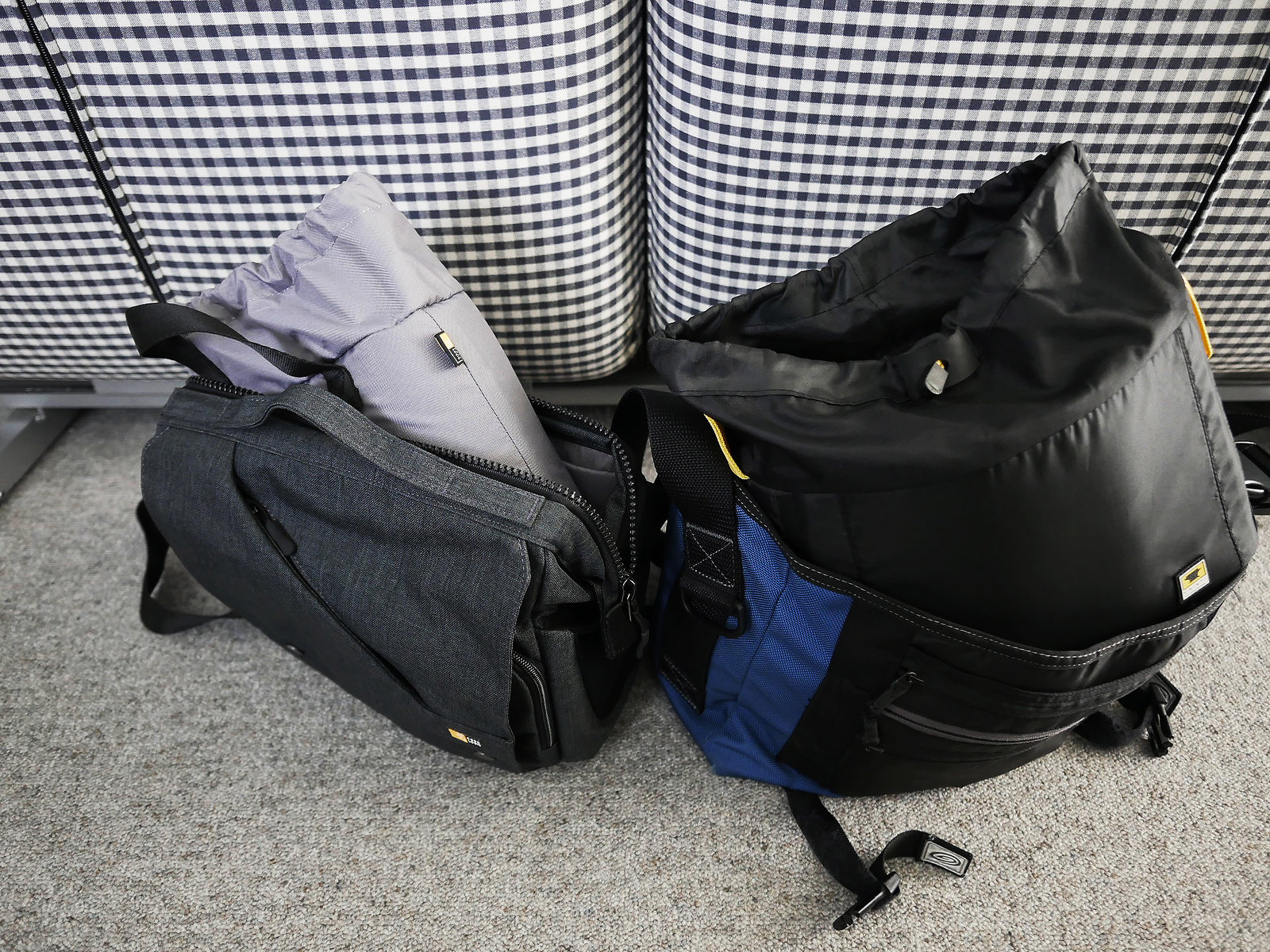 I have lots of bags - because I also use them for organisation and storage (cupboard space in my flat is limited). But I only carry a small number of them regularily. My most used (and certainly most loved) bag is the Timbuk2 "small" messenger bag you can see on the right here - it's actually pretty roomy. It houses a generic photo insert that's obviously made for big DSLR gear; this means that it'll take basically every camera I own, up to the Pentacon Six. But since I own many smaller cameras, most often it means that I take lots of stuff, ususally several cameras - the bag takes up to five, at the moment of capture, there are four in there: three film cameras (including an SLR!) and the GR. While this is fun, it means that the bag can get heavy at times - anyhow, it's certainly not conducive to common sense ...

What I wanted, therefore, was a small bag that would take one (or, in an emergency, two) cameras and some other stuff (I need to have a book with me at all times). I've been a fan of Case Logic bags for some time in terms of how they're made and kitted out, but the only one I had so far is a big messenger (that takes the D750 with the Sigma Art primes and 24-105mm zoom ...). Now I found this little guy here on the left. Nice compact bag, opens up on top with a zipper (that works very well - I was a bit afraid of that), and crucially, there's only a small photo insert/drop bag in there that'll take a DSLR with one medium-sized lens attached or a mirrorless camera with up to three lenses, and that's it. The bag will actually take some other inserts I have, up to some quite roomy ones (including one that will hold the Pentacon Six!), but the main point is that I now own a bag and an insert that are small, convenient, low-key and not likely to get stuffed unduely. And even though I've worn countless bags that way, it's the first true cross-body bag I have - talk about comfortable.

I have had some problems with classical shoulder bags - even my most loved ones (see the post above for two examples!) can be uncomfortable when used for a long time, especially if I pack heavy stuff. But I found backpacks to be a lot more cumbersome - until I found this little guy (and I mean "little" - it's small, light and sleek): the Mindshift Gear rotation180° Trail 16L. As shown in the picture, I can pack two bulky cameras and carry them without any major issues for hours on end. Of course, this is not my usual kit, but it is quite a relief to finally have found a bag (or backpack, rather) that is pratical *and* really comfortable - plus it's much more suited for hiking and cycling than the shoulder bags. I still use the latter ones a lot if I don't pack a lot of gear (or the setup isn't too heavy), but if in doubt, I reach for the Mindshift. 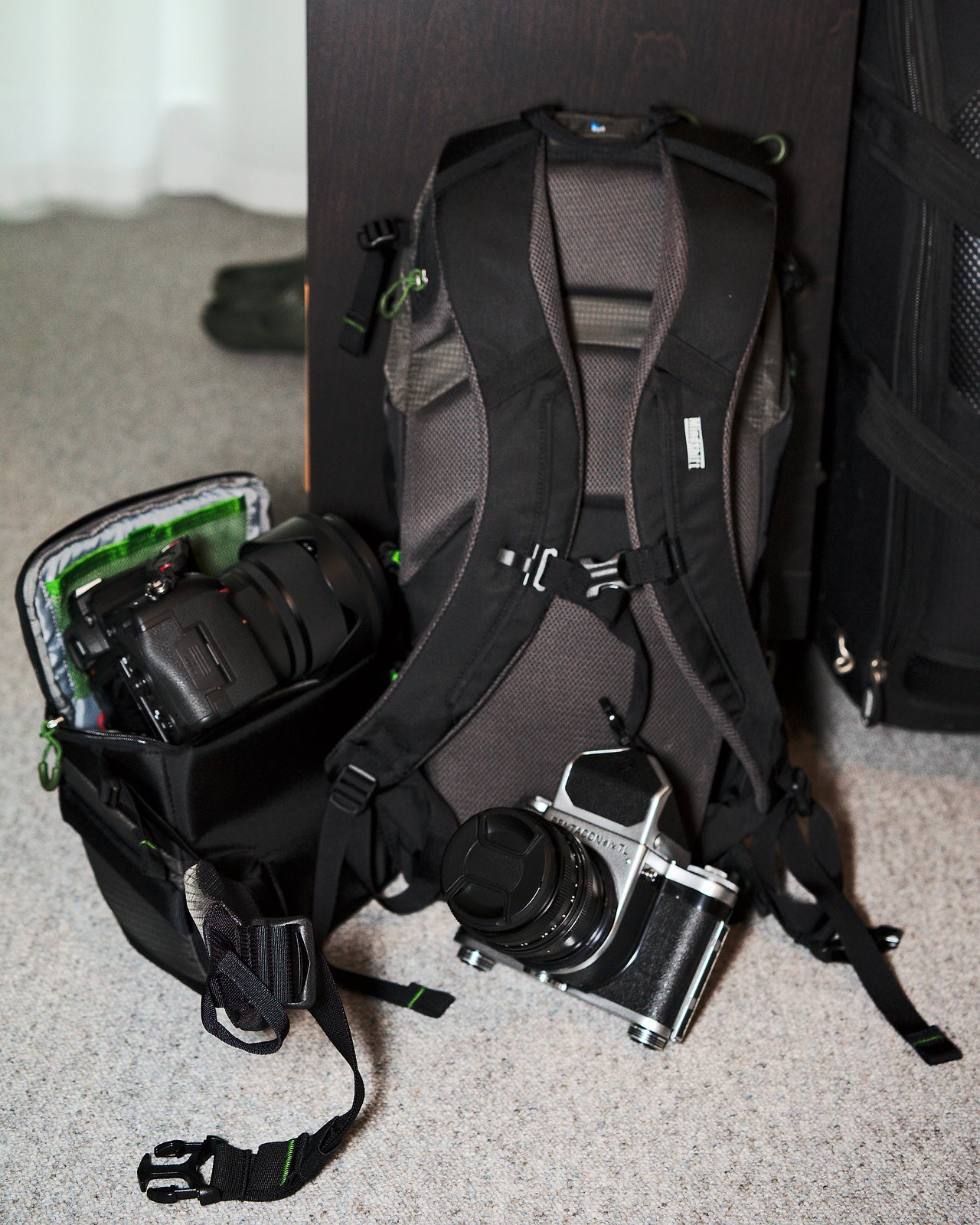