With the GR Digital I and II, I had the impression (right or wrong) that the sensors being used by Ricoh were slightly behind those used by Canon and Panasonic. With the GR Digital III, it has been my sense that Ricoh's small sensor technology is now up there with the very best.

Since the GRD III is said to use the same Sony sensor as the Canon S90, a camera which is getting rave reports on its low light/high ISO performance, I decided to do an ISO shootout between these two cameras and throw in the Panasonic G1 for good measure.

For the purposes of this comparison, I used Iridient Software's Raw Developer because that application supports RAW files from all three cameras and also because Raw Developer does not apply any sharpening or noise reduction whatsoever when those settings are disabled. The result is as close to RAW as a fully converted file can be.

This was the scene for the test (my kitchen lit primarily with indoor lights and secondarily by a small amount of light coming through the window on a heavily overcast day): Autofocus accuracy was confirmed for each camera by focus bracketing. In the case of the GRD, this revealed misfocus (backfocus). I am not sure whether the GRD was focusing on something in the background or simply has a focus problem. Either way, I manually focused with bracketing and picked the best set for the comparison.

The resulting GRD file was a bit brighter than the other two for any given nominal ISO/shutter speed/f-number combination. I should have processed them for a matched output brightness. Next time... 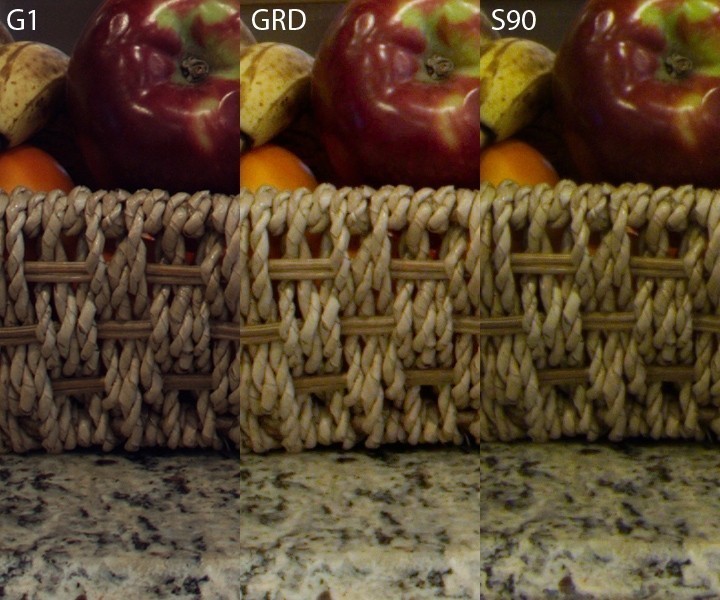 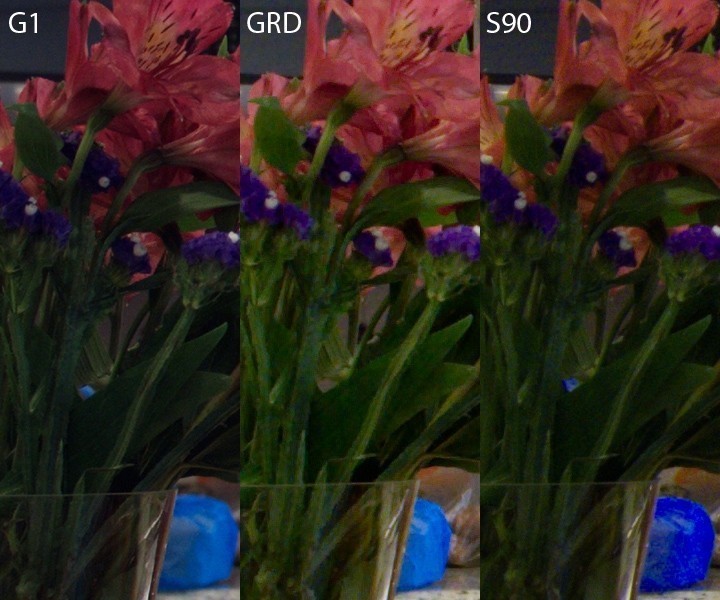 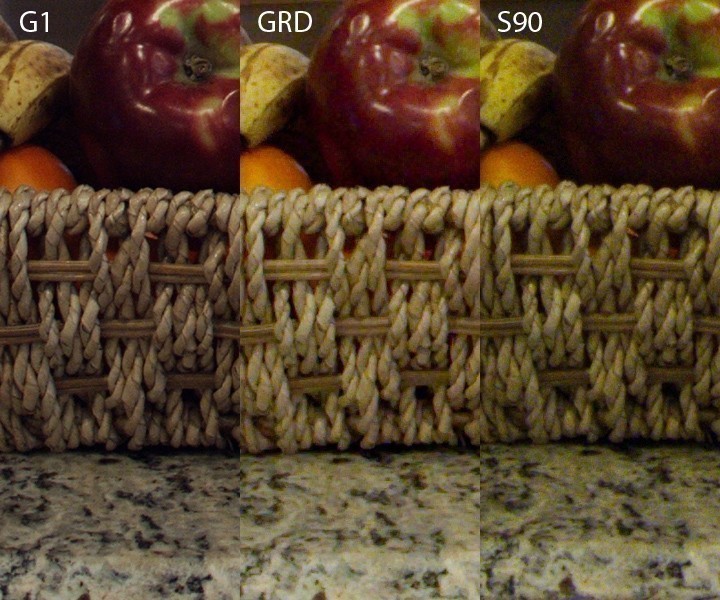 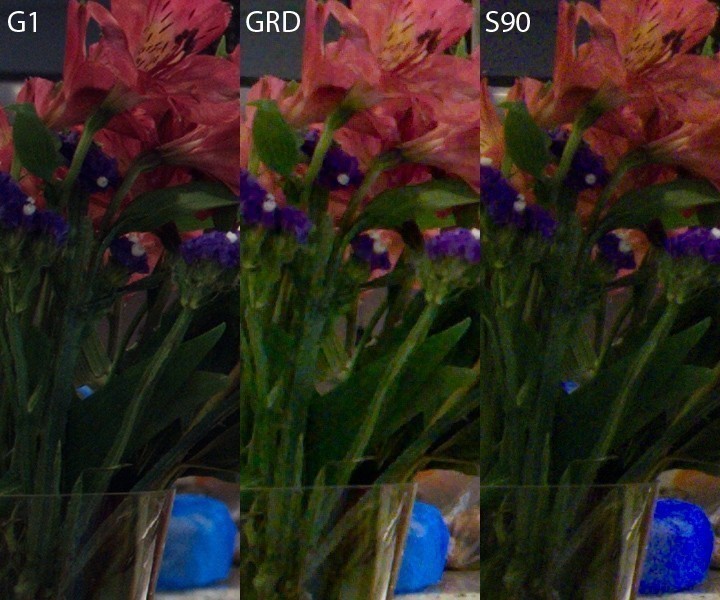 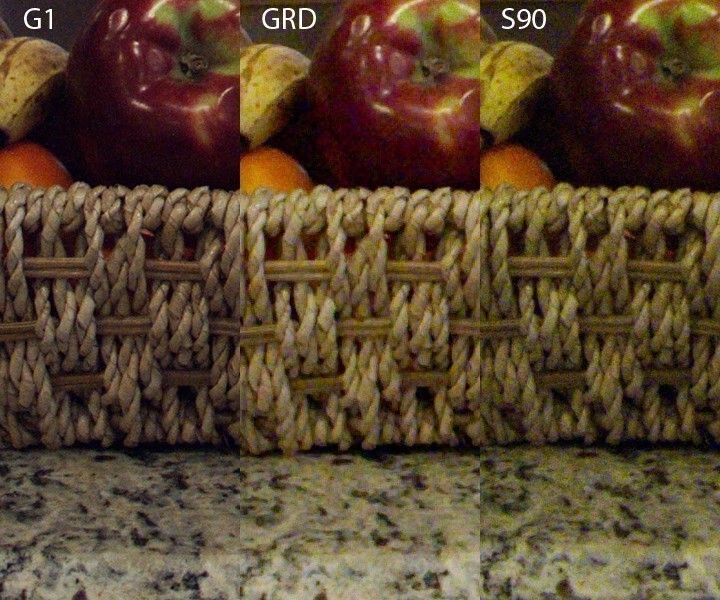 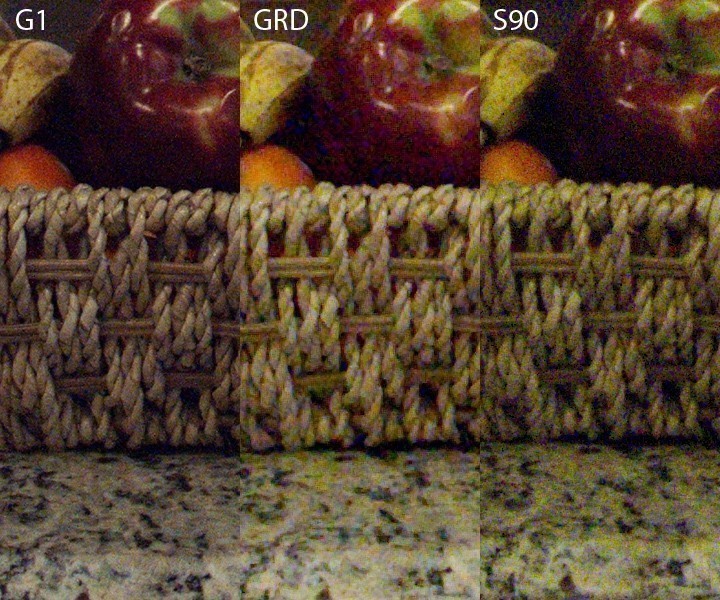 Overall, the G1 stands well above the two small sensor compacts. The GRD III hangs tough with the S90. Compared to the S90, the GRD shows slightly less noise but also slightly less detail. Having printed high ISO files from both cameras, I'd say they are equally capable for shutter speed-limited, low light work.

Whew, makes me happy I went with the G1

Interesting article, thanks Amin. I would like to see an ISO shootout MFT / NEX / Full Frame.

The larger sensor should outperform the smaller versions. I also prefer the colour rendition of the G1.

bilzmale said:
I also prefer the colour rendition of the G1.
Click to expand...


I prefer it, too. The reason for the wrong color may be the mixed light. The auto white balance of my S90 is not good enough in such situations and results in too much yellow (which can be seen in this pictures, too).
A

The G1's output looks great, and frankly embarrasses the GRD III and S90. But if that was not the case, I would think there was something very, very wrong. The G1 has a much larger sensor, almost APS-C size. I assume that the same would hold for the GF1's output.

Herman said:
Interesting article, thanks Amin. I would like to see an ISO shootout MFT / NEX / Full Frame.
Click to expand...


Thanks, Herman. I'll test the NEX soon enough. In the meanwhile, here's a MFT/35mm frame ISO test (2 out of the three that you requested): https://www.photographerslounge.org/f41/panasonic-g1-nikon-d700-iso-shootout-160/
T

A little unfair comparing two tiny sensors against substantially larger one, but a good test. :smile:

Thanks, Toonman. I wasn't trying to make the smaller sensors look bad here, just provide a sense of the difference. I read a lot of comments in the DPReview forums from people shooting JPEG with the S90 and feeling like it gave the same high ISO performance as MFT, so I wanted to clarify the actual relative sensor performance differences at various ISOs.
T

Hi Amin. I see your point. I prefer to shoot RAW with my S90 and then use Neat Image for cleaning any noise. I had the G1, I thought the noise was too much at iso 800 for a camera with a large sensor. I now have a Samsung NX10 which is in a different class (noise wise).
M

This is a very nice comparison showing the impact of the larger sensor size. The difference is clear even at base ISO, this should perhaps be obvious but when we talk about small sensor cams usually the perspective is 'excellent IQ at low ISO, worse IQ at higher ISO.' So it's nice to actually see the difference that is even present at base ISO. It helps give a better basis for choosing between different formats, each of course presenting its own set of compromises.


Amin Sabet said:
Thanks, Toonman. I wasn't trying to make the smaller sensors look bad here, just provide a sense of the difference. I read a lot of comments in the DPReview forums from people shooting JPEG with the S90 and feeling like it gave the same high ISO performance as MFT, so I wanted to clarify the actual relative sensor performance differences at various ISOs.
Click to expand...