Last Days of the Arctic

Ragnar Axelsson is an Icelandic photojournalist who makes a living shooting for Iceland's largest newspaper, Morgunbladid. When he's not on assignment for the paper Axelsson travels the far north of Iceland and Greenland recording the disappearing lifestyle of the inhabitants. Axelsson shoots with a Canon 5D and a Leica M6 - so he's definitely a serious compact shooter.

Earlier this week the BBC broadcast a one hour documentary, Last Days of the Arctic, following Axelsson on his journeys to these regions narrated by the photographer himself. The programme is now available on BBC iPlayer until 22 May. Unfortunately for legal reasons BBC iPlayer programmes are only available in the UK so to watch it elsewhere you will need to get a UK IP address.

I suggest Expat Shield which is the one I use. It's free but ad supported so you do occasionally have to close down irritating advertisements but it will allow you to watch iPlayer. There is also a short YouTube video of images from the Arctic and plenty more on his website. 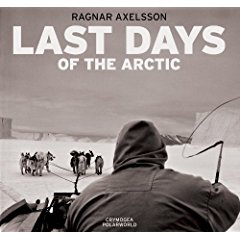 A book of images from the project, also entitled Last Days of the Arctic, is available in the UK

Expat shield assigns you a UK IP address. I've found it to be fine running iPlayer most of the time. As long as your local connection is good enough it should work. The only times I have a problem are when there are major live events happening, like big sporting events. Then I think it gets overwhelmed. Otherwise it has always worked fine for me when watching repeats.

The only annoying part is the advertising, but since its the advertising that keeps it free I can live with that. One way to minimise that is to shut down the expat shield screen as soon as it confirms there is a connection. This seems to help reduce the number of adverts.

I know a lot of these kind of programmes come complete with adware, spyware etc. but I keep my computer well monitored and I'v not yet come across any problems, though I do not let it run at start up and I always completely exit rather than just disconnecting when I'm done.

This looks very interesting, olli and thanks so much for the how to's on the Expat Shield and everything else. That is something I never, ever would have known about.

Thanks BB. I only know about it because I live overseas and can't get by without the beeb. I used to stick to Radio 4 which was available most places most of the time but when iPlayer came along with access to BBC TV I had to find a way to make it work.

There are plenty of paid for VPN's that that guarantee certain levels of performance and security but I've always found Expat Shield adequate on my laptop screen and reasonably fast connection. It's not so good for major live sporting events since it tends to get overloaded but for those I normally use P2P and Sopcast anyway so I'm covered.

Supporter
Does BBC allow a paid subscription model for those outside the UK?

They are working on it. The reason why iPlayer is not available outside the UK has to do with the funding model. Since BBC UK is funded by the UK tax payer the BBC has not been allowed to commercialise UK broadcasting overseas.

BBC Worldwide - which runs BBC World BBC America etc - is a commercial broadcaster so can sell advertising and sell subscriptions.

There are plans to introduce an international iPlayer this year using a subscription model which will give access to BBC archives though what exactly that means in terms of access to more recent programmes isn't clear yet.