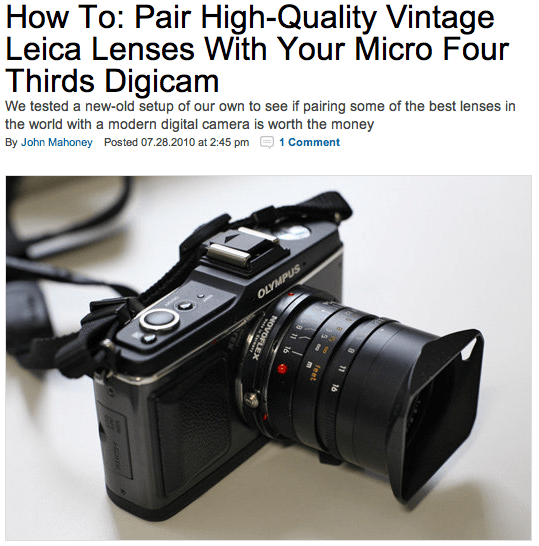 ““Our lenses our designed to work best with full format,” said Erhardt. [With a different sensor size], the light can hit different pixels of the sensor at a very extreme angle--once you have that, the image may be slightly out of focus, or not as bright around the edges.”
“One reason why we've decided not to move into Micro Four Thirds is that we have looked at the sensor size and realized that it cannot produce the image quality that we need. Therefore we decided to stick with the full format in addition to APS-C,” Enhardt continued. “It's all about the ratios.”
B

That doesn't really make a lot of sense, since they're also selling re-branded Panasonic cameras with much smaller sensors. I think there are probably other reasons why Leica has not joined Micro Four Thirds. For one, their strength is in optical and mechanical systems and not electronics. If they were to produce a high priced Micro Four Thirds body, it needs to focus just as quickly and have just as minimal of a shutter lag as the cheaper Panasonic bodies. I'm not sure Leica can compete in this arena. I think they do quite well as a niche player by not competing directly and concentrating on high end optics and traditional rangefinder bodies. The Leica X1 is more of a competitor for Micro Four Thirds, so Leica gave it a distinct rangefinder styling and used the larger APS-C sensor.

There are a couple ways in which the quoted comments make no sense, but I think the intent behind them makes some sense. First, the contradictions: 1) 35mm format Leica lenses do not render light at greater angles to MFT sensors than they do to 35mm format sensors. Quite the opposite is true. The reason for the better Leica lens edge performance on Leica M bodies than MFT bodies is that the Leica M bodies have specially designed CCD sensors, made to deal with light incident at those angles, and also because the software is designed to automatically correct the light falloff and color inaccuracies associated with those light issues. 2) It's not at all "about the ratios". A Leica lens passes light in an image circle, not a 3:2 rectangle, so it has nothing to do with the ratios.

For Leica to get deeply involved (beyond rebranding) in MFT and maintain high image quality, they'd either have to design lenses for the format or have a custom made sensor to deal with their current lenses. I can see how they might conclude that neither of those is a very profitable direction to take considering their limited resources and current ability to sell all the M9 bodies they can make.

The link is broken for me
How To: Pair High-Quality Vintage Leica Lenses With Your Micro Four Thirds Digicam | Popular Science

There quite some comment over at DPR
So much for Leica joining M43: Micro Four Thirds Talk Forum: Digital Photography Review

I think that no G1/GF1 Leica versions appeared indicates that Leica want more control and therefore bypassed m43 (odd the only leica m43 lens is the PL45/f2.8)
the rest are all pure Panasonic.

They are after all different companies Ideologically, Leica Niche Panasonic mass market, they did collaborate on the L1/Digi Lux3 and 43 lenses, great lenses but the bodies not a huge success, besides Oly have great hold on 43 DSLR's with Pro versions.

So I think the happy alliance Leica with Panasonic is over apart from the one or two small sensor compacts.

Leica also want to avoid brand dilution and remain a niche for pro's and Leica enthusiasts, perhaps a re-badged Panasonic m43 line would have done just that.

A
Leica X2 to be "Micro Fourth Thirds"?