Here's the basics of most levitation shots. Shoot the scene with something "floating" using a stool or ladder or ropes (if you're into that sort of thing). 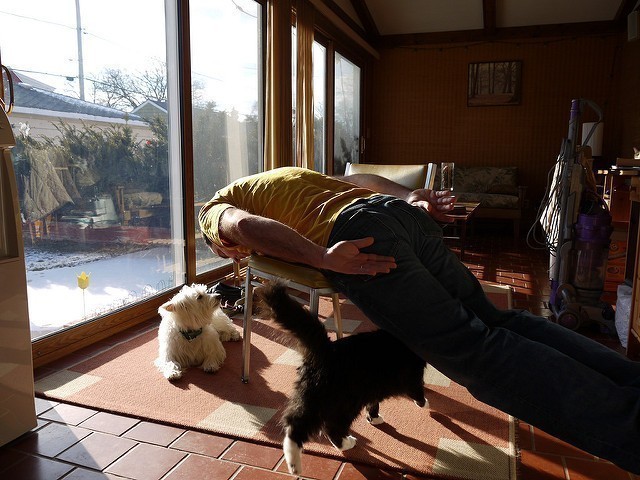 Then remove the floating object and its' support mechanism and shoot the same scene (hopefully without bumping the camera which should be quite secure on it's tripod).

Then paste the image of the "floater" over the image of the blank scene in any software that allows the use of layers (Photoshop, Elements, GIMP, pixlr.com, etc.) and "erase" the supporting mechanism. Then deal with the fallout of shadows where they shouldn't be, fill in parts of clothing that were hidden by the supports, etc.

In the shot above, I just got lucky that the cat happened to walk beneath the supporting chair as I released the shutter.

Luke said:
Gary, don't misunderstand me. I am actually floating (many years studying and intense concentration and mind training), but sometimes I need to take an extra shot just to get the dog's expression properly
Click to expand...

Planking creatively. Yes you did get lucky with the cat but given the nature of cats, they have to be in the middle of it all. Is this basically what you did in the kitchen too? Your arms looked more natural in that photo, more floaty.

yup, the oven one was pretty similar....it was a high stool. After having done one, I had a few things I was focusing on for improvement. Now having done two, there's a few more things I need to work on. Eventually I'll do one that is incredible (I hope).

The shadows are all wrong it must be photo shopped, lol

KVG said:
it must be photo shopped, lol
Click to expand...

Luke said:
yup, the oven one was pretty similar....it was a high stool. After having done one, I had a few things I was focusing on for improvement. Now having done two, there's a few more things I need to work on. Eventually I'll do one that is incredible (I hope).
Click to expand...

Actually I thought the kitchen was pretty good. The only improvement there I could see is to include your feet so there is no doubt you are floating. I like the natural posture of checking the oven as opposed to arms pinned to your sides.

There's some sloppy cloning where the stool blocked my sweatshirt and jeans and I had to try to recreate them. Also some of the cloning in the shadows on the floor is pretty shoddy. I also should have shot in full manual.....the two exposures were different making everything more difficult than it needed to be.

The original one was done for a facedown group on flickr where people usually use that stiff "planking"(God, I hate that word) form. I agree the kitchen one looks more "natural". There's some really AMAZING ones here (and a few total duds).... Levitation Photography: 65 Stunning Examples & Tutorials
I

Luke said:
There's some sloppy cloning where the stool blocked my sweatshirt and jeans and I had to try to recreate them. Also some of the cloning in the shadows on the floor is pretty shoddy. I also should have shot in full manual.....the two exposures were different making everything more difficult than it needed to be.
Click to expand...

I would think that draping your shirt over the edge of the stool might help so it looks like it is hanging from you, even if you have to make it really tight on the other side of your body to accomplish this. The stool and your body would pin it in place. You do need to shoot in manual mode. lens off autofocus, and without auto white balance because even a cloud could change your wb. Then you should be able to overlay photos, erase stuff off one exposing the other.. says she who has not done it yet but tinkers in photoshop a lot. If you have your light source facing you so that your shadows would be behind you and your body could actually cover them, that might help too. In other words your body parallel to your glass doors and your camera of course somewhere along that wall too. The other option is if you see your position is creating a lot of shadow, then put your camera on the side with the shadow and have it blend off into the outermost edge of the image so you don't have to touch up. Oh-- remote or timer?

Great link, I'm going to go look at it now. You have inspired me, just saying that is not easy.

I use a timer, but only because I can't find my remote. I'm not much for planning things out. You've nailed a lot of the most important bits. I'm the lazy guy who would rather just come up with hair-brained ideas, fire them off and then try to fix them in post (and then curse myself for not being a better photographer).

You never know where you will find inspiration.

I'm flirting with the idea of doing one of these a day for October (AND taking out the prompts!!....but I'll probably back off both of those aspects.....LOL).
I

Photo Extremist: Creative Photography Tutorials, Photoshop Tutorials, Instructional Videos You could also do cat tossing! Or dog tossing if you feel the cat will beat you up after tossing it around.

Isoterica said:
Photo Extremist: Creative Photography Tutorials, Photoshop Tutorials, Instructional Videos You could also do cat tossing! Or dog tossing if you feel the cat will beat you up after tossing it around.
Click to expand...

I will never, ever condone cat tossing for photographic enlightenment, but every once in awhile our little black tuxedo fills my head with bad thoughts. FWIW, he always seems to land on his feet. Oscar was never going to be the best or brightest, but we love him regardless........
View attachment 59367
I'm handsome? by Lukinosity, on Flickr
I

Two thirds down the page where the video tutorials begin, the Flying Cat. I found it on that page you shared and isolated on another page because I didn't know how to link a specific video there.

I'm not fully sure how to interpret 'photographic enlightenment' because the word enlighten refers to intellectual or spiritual light the results of which would be shedding the light on something or revealing some truth. I don't think he was working towards anything cerebral, I just think he photographed his cat and he was very careful and gentle about doing it.

But I am still hovering over your post because I am not sure if you mean exploitation or cruelty-- neither of which I condone. After rescuing homeless animals, taking in abused ones, nursing back to health ill or wounded ones and spending thousands over the years on them.. I would never suggest harming an animal.

I guess that's what I essentially needed to say.

Below two of my rescues, 1993 & 2012. My cat I spoke of before in the cat thread, one day old with umbilical cord attached, dropper fed and not expected to live-- while I had a 6 month old baby to care for. The bird was attacked by a crow as a fledgling unable to fly away, literally being held down as he was being eaten alive. My husband scared the crow off saving him. There was nowhere to take him on a holiday weekend so I cleaned his wounds, ensured he got some food, kept him warm and he survived. You can see the tufted evidence of his damaged wing.

Anyway now I am going to bed having worried over how to respond for long enough. I still want to levitate and thank you for all the information on how to do so.

Oh my Kristen. I'm sorry I didn't put some sort of laughing emoticon in my post. I was just being my usual goofy self. I'm sorry you anguished over my post thinking I was reprimanding you for considering such a thing. I toss my cat all the time. Gently of course, and in a way so that he lands on his feet. I pick him up off my computer keyboard and drop him on the floor. I pick him up off the kitchen countertop (no-no kitty) and let him drop on his feline four. I pull him out of a fracas with our girl cat, carry him to the doorway to the upstairs bedroom and toss him around 4 stairs up so I can close the door behind him in time for an effective time-out.

Obviously I don't condone violence to animals......that is the most egregious sin. But a bit of cat tossing is good for the soul

I think I may do a cat juggling levitation shot this morning if Oscar is in a playful mood.
I

It occurred to me this morning you might be poking fun at yourself.. but if it was otherwise I wanted to answer properly. Thank you for clearing this up for me, I feel a lot better and I am also amused you do the cat toss and close door technique. I think we have all had to do that as they are so much faster than we are. I have to pill my cat now that she is older and has thyroid problems. Imagine a cat on speed. So the meds slow her down a little correcting the imbalance.. but if you've ever had to pill an animal they can get quite creative about how to get out of that as well as develop the technique for spitting. I'm a pro at it now, with her anyway. If I had to tend to another cat, they too would come up with unique ways of twisting out of it. My lure.. tap water. Come kitty kitty you want a drink out of the sink. Bathroom door is closed now and you are miiiiiine!

Remember your settings, camera on manual, lens off auto-focus if you can, set your white balance, set up with regard to your shadows.. the rest of it you seem to be a master at. Well except for maybe getting your cat to cooperate. Catnip perhaps? If you can pull it off I think it will be great!

Since I don't have a cat of my own, I was wondering if its ok to toss someone else's cat?

Boid said:
Since I don't have a cat of my own, I was wondering if its ok to toss someone else's cat?
Click to expand...