Yay, I get to start with the obvious answer: Panasonic 20mm f1.7

The compact lenses, except I always end up buying the largest, fastest M.Zuiko lenses I can find!

Very good value (paid 180 € for mine), very compact, very good IQ (perfectly usable wide open), starts from 70 mm-eqv instead of the dumb 80 or 85mme like most other crop zooms of this range.

Back when I was new to m43 I wasn't sure if a 70-200 type of lens offers anything to me. This 35-100 was perfect since it doesn't weight anything and can be thrown into the bag. I could experiment with little weight penalty.

I gave up M43 for a while in 2019 and this was the lens I couldn't sell because it's so good. It wasn't long until I had to get another body so that I could use this gem of a zoom.

Addendum: I actually realized that this piece of gear is the oldest purchase that I still actively use.
Last edited: Aug 18, 2022

agentlossing said:
Yay, I get to start with the obvious answer: Panasonic 20mm f1.7
Click to expand...

Yes! And in my case on an EM5 ii which makes a small, take anywhere/anytime, advanced kit!

My basic 'family' (left to right): 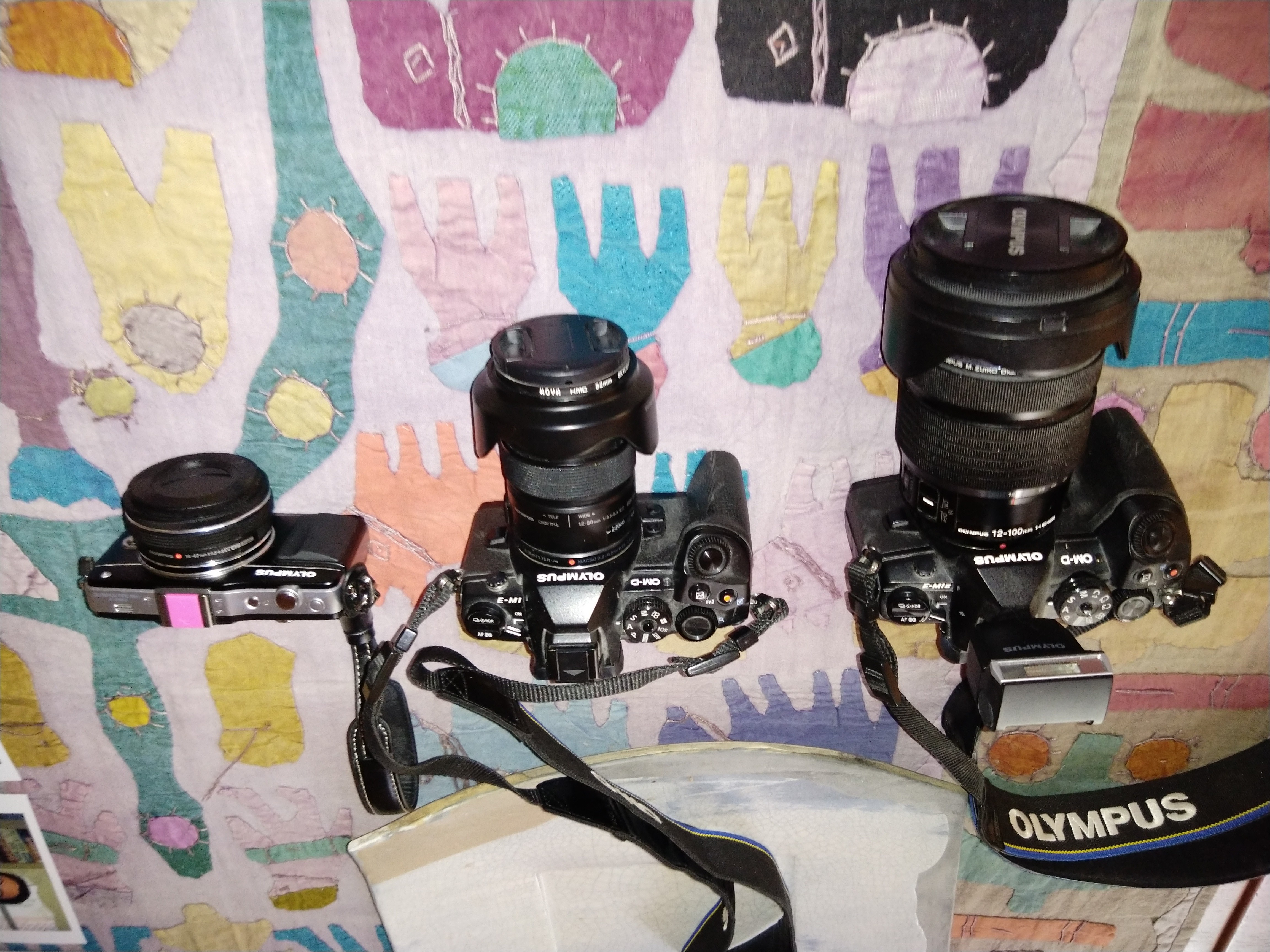 The first is my everyday camera, weighs about 1,100 grams. The second weighs about half that, and the third will fit in a polo shirt pocket, and weighs a whole 360 grams.

The first two have the Olympus legendary IBIS and weather sealing.
The 12-100 is simply the best lens I have ever owned, and I've owned some beauties. The E-PM2 is ridiculously tiny and capable.

I have lots of other stuff, but even my 5 MPx E-1 will make excellent A2 fine arts prints

I think the compact size of the lenses (And quality) for me. It means that I can get both sharp and pleasingly rendered images without costing me huge amounts of money on glass.

It is especially useful when I want a portrait lens, or a telephoto. Effectively doubling your FL, means that I don't have to lug around big and very expensive glass to get the photos I want.

I used to shoot Canon years back, but ended up very rarely taking the camera with me when I left the house as it was too bulky, and I felt a bit silly turning up to random places with it hanging round my neck. Then I saw the first Olympus EM5 in Jessops' window..... I traded in my canon gear for it, and was smitten! Small, "trendy retro" look, and casual enough to take everywhere.

At the end of the day, I am no pro. Just a hobbyist. Therefore the best camera/system for me, is the one I can both afford, and actually "want" to take out with me every day.

For me, it's probably a combination of small but well designed camera bodies that fit nicely in my hands and are usable. And then a selection of relatively affordable - and compact - prime lenses. For me, standout Lumix cameras include the GX7, the GX8 and the GX9; standout lenses currently are the 20mm which Andrew mentioned, and also the PL15mm. I'd also have to add the GM1 to that list.

On the Olympus side, I love both the EP5 and the 1st generation EM1. Also on my personal short list is the Pen F.

Weirdly, the other thing that is important to me is a camera's viewfinder or EVF. Of all the one's I've mentioned, the GX8 stands out. I suspect the G9 would as well, though I prefer the smaller body sizes of most of the other ones. And though its smallish EVF has generated more hate than love, I have come to appreciate the one in my GX9, both because of its swiveling, its (optional but necessary) eyecup, and most of all, the ability to view Panasonic's cool l.monochrome.d black & white setting through the EVF, which has totally changed both the way I use the camera - and also am able to 'see things' in the world around me.

MiguelATF said:
Weirdly, the other thing that is important to me is a camera's viewfinder or EVF. Of all the one's I've mentioned, the GX8 stands out. I suspect the G9 would as well, though I prefer the smaller body sizes of most of the other ones. And though its smallish EVF has generated more hate than love, I have come to appreciate the one in my GX9, both because of its swiveling, its (optional but necessary) eyecup, and most of all, the ability to view Panasonic's cool l.monochrome.d black & white setting through the EVF, which has totally changed both the way I use the camera - and also am able to 'see things' in the world around me.
Click to expand...

Based on your comments here, I think you would LOVE the Pen F.....

Besides the smaller size and weight of camera and lenses (even primes) the outstanding feature - and the reason for my sticking to Olympus - is the fact that with all technological advancement I can still use each of the lenses I bought in the 16 years of taking photos with the OM-4, and there were really good ones among them. The autofocus does not work, OK, but I'm focussing manually most of the time anyhow. There are few firms who are that customer-friendly and according to today's standards sustainable.

My take from using the m43 system years ago was that you can equal/ better all lenses on m43 with other systems, but not the Olympus 75mm F1.8. I'm not even sure it's completely an Olympus lens per se and think I saw somewhere that Sigma have a great deal to do with its design and build. But that's irrelevant; it's output is excellent and that size to performance ratio, bearing on mind we're talking 150mm equivalent focal length with that m43 sensor, plus wonderful ease of instant AF use, especially using it with touchscreen, always made it stand out for me. Once you use it for anything other than straight portraits, it's clear you have something remarkable in your hands.

I have always liked Olympus machines and like the colours out fo the digital systems, for me mainly the colours.
I also like the relativly small size and often I will go out with just a body and prime and its small size just suits me.

In my opinion, M43 is often more than the sum of its parts. The lenses/bodies punch well above their weight - there are numerous threads and posts about this. Spec-wise, other systems are better; regarding ergonomics, usability, output, flexibility and other “soft” factors they’re not.

If you want some examples, you can look at my thread on the GX800, @minimalist82 brilliant showcase of the capabilities of the GX9, the thread on the great monochrome modes of Panasonic cameras by @MiguelATF and contributions by many others.

The Olympus 40-150 R aka plastic fantastic. Just a great, super cheap lens. Has a bit of reach and can still do some portraiture.

For birds and planes there is no FF equivalent that I can either afford or am willing to carry.

Super close, super light, depth of field advantage over FF and hand-holdable. I'm really pleased with the Lumix S5 and Sigma 105 for most macro but for the smallest stuff, the Olympus is by far the better option.

Still my preferred option for large stacks too. The S5 has the electronic shutter, but you can't use it with flash.

I came to m43 in 2013 via the original E-M5, at which time I was heavily invested in Nikon F-mount gear. As the OM-D bodies evolved, they became competitive with the Nikons in ergonomics and outstripped them in weather and temperature resistance. I used Nikon gear in winter because I had a chance of controlling them while wearing gloves. But Nikon only warranted its product down to 40F. 40F, Nikon? You must be kidding – <40F accounts for four months of my shooting year. Nope, no joke, 40F… I liked being on the cutting edge of computational photography, as well. How about => reach for =< weight? Nor did it take me very long to appreciate EVFs’ strengths. All in all a very well-rounded package for me that gives me no cause to cast about for better.

Simonix said:
Based on your comments here, I think you would LOVE the Pen F.....
Click to expand...

Your comment is 1000% correct...and I actually did have a Pen F for awhile and loved shooting with it. It's one of the few cameras I regret having sold (for reasons which seemed good to me at the time, however). I loved the EVF, and the camera's ability to shoot interesting in-camera jpeg recipes, something the Pen F got me partially addicted to. Some years later, I bought a used XPro3, though - and it cured me of my nagging desires to get another Pen F (though, admittedly, the Olympus's small size was a huge plus).

Another reason I've been able to resist buying another Pen F is that, little by little (it's taking me longer, however) I have come to appreciate its smaller sibling, the E-P5, a truly underrated little gem in the Olympus lineup, IMHO.

The whole system stands out because it's not a catch-up mirrorless system just like the ones offered by other companies. It's designed from the ground up, from the four-thirds sensor (actually a video format) to the body, then from the body to the lens. My main standout points for the system are:

Though what brought me here was a better focused travel kit. I had already moved from Nikon FF to Fuji. But I wanted even smaller and zooms that covered a wider FL range, enabling me to carry fewer zooms. Stabilization was icing on the cake. But small and light kept calling and travel is now handled by 2 RX100’s. The M4/3 travel kit joining an X100T/V for my daily carry.

I don’t sell stock photography, and someone once told me no camera was going to make me a photographer.

David Thorpe talks about his love affair with the m43 system