Magpies can be manipulative bastards.

Took Keesha and Jadey out for a walk. I saw a bunch ('murder' just doesn't sound right) of magpies. Actually the magpies saw us first and they started strolling, STROLLING at a leisurely pace to cross the road while making a racket. The local cat, to whom the street belongs to, heard the magpies and made an appearance. 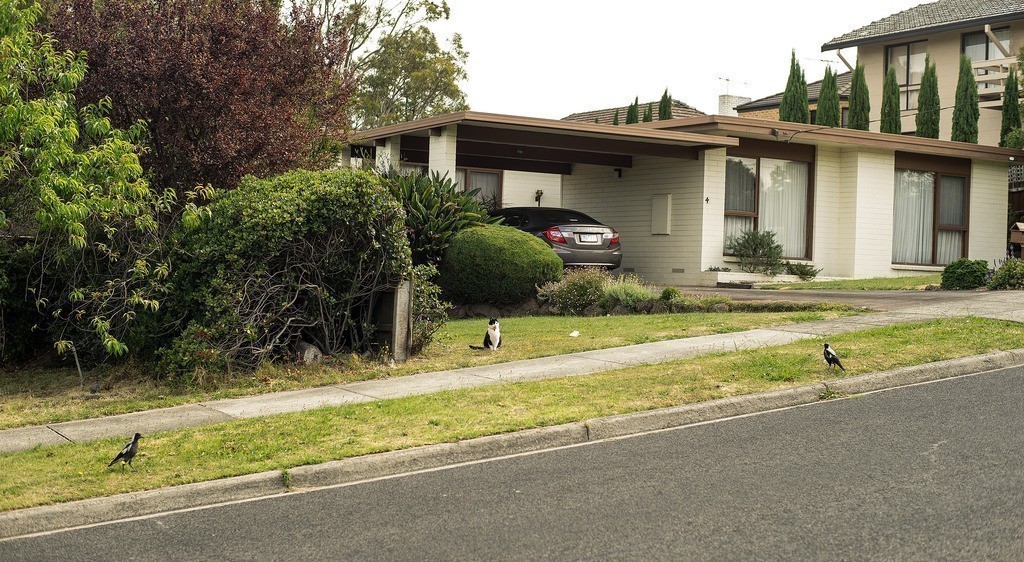 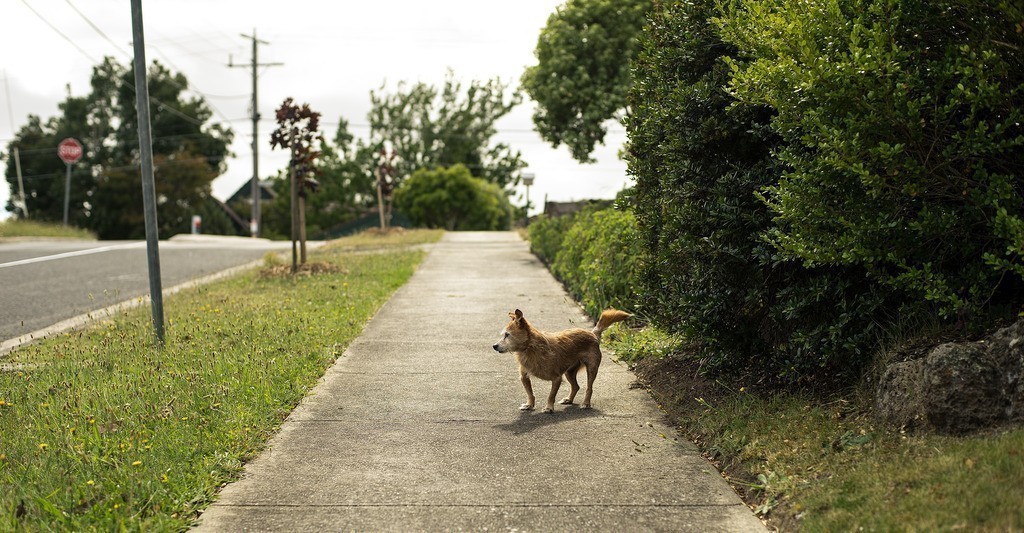 The magpies made sure the local cat knew that Keesha and Jadey dared trespass on to its street. Only then did they make an exit. 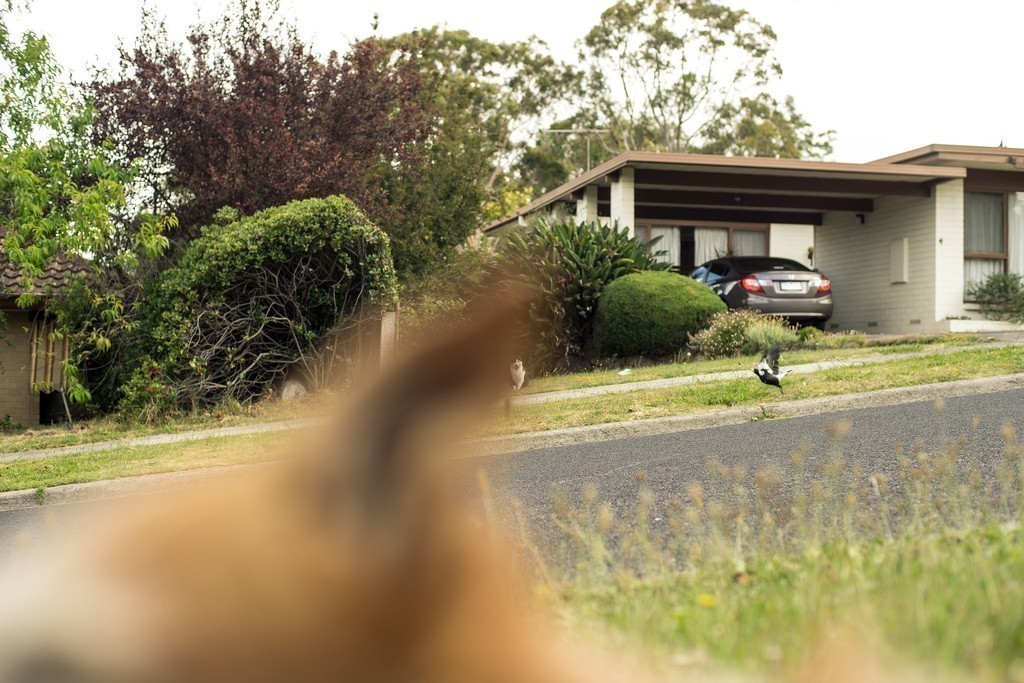 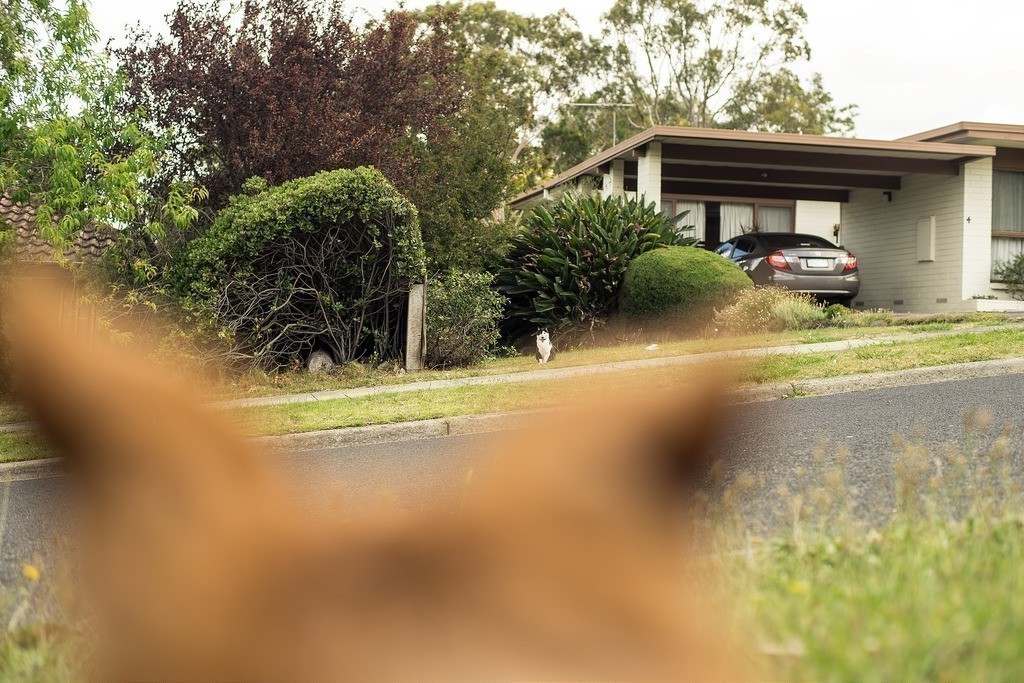 I mean, if looks could kill...

Jadey was still half asleep and didn't notice the other cat for a while. 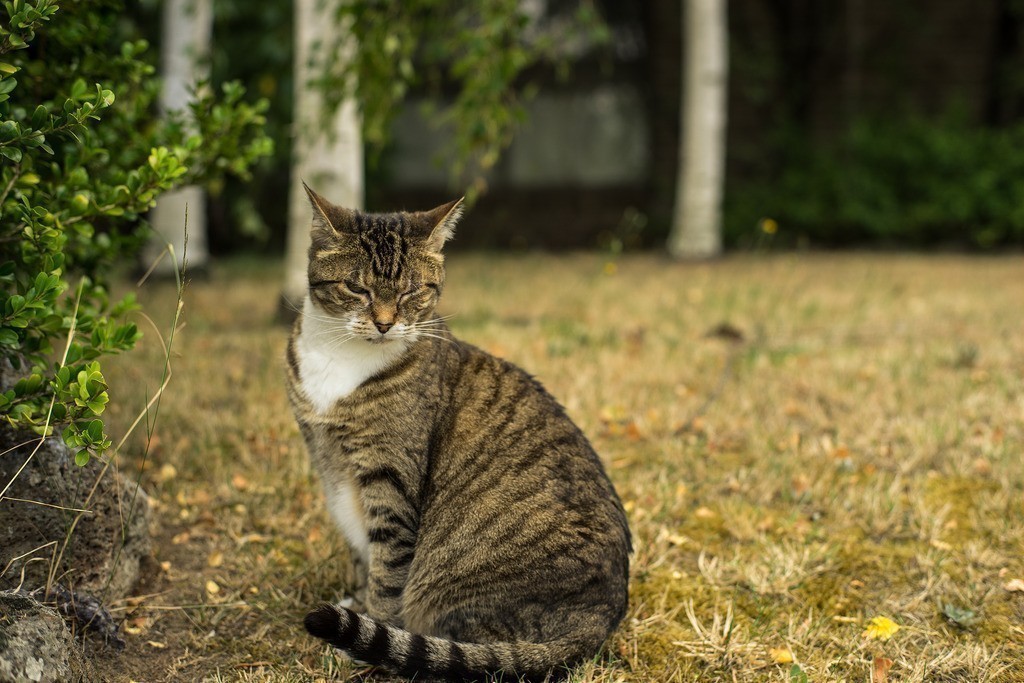 Keesha didn't really care. If she was younger, Keesha would have chased the other cat for sure. 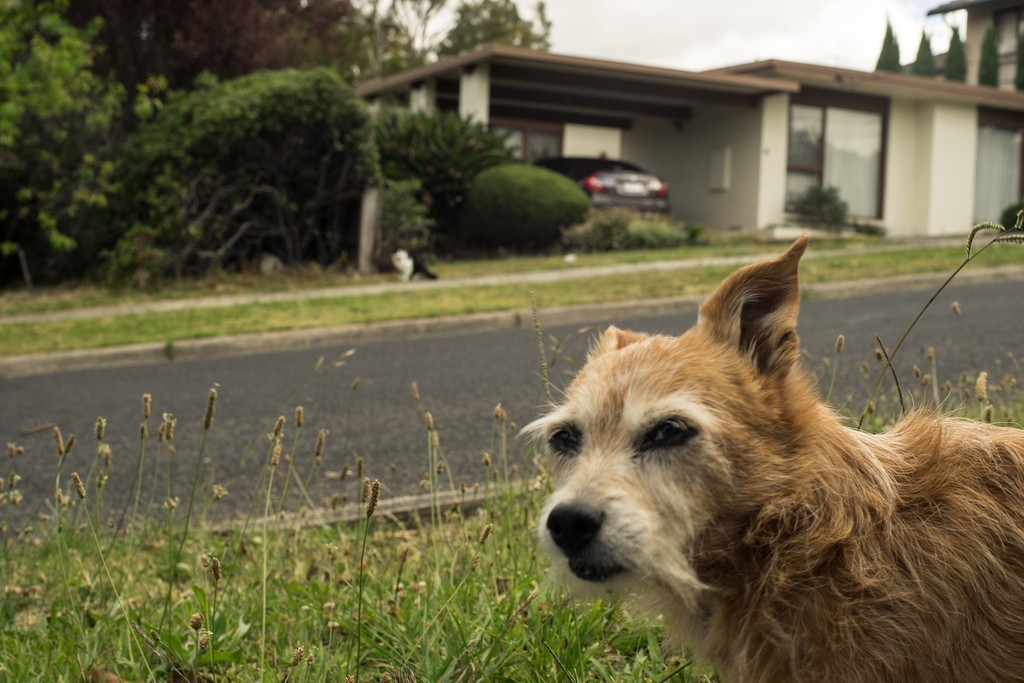 Then Jadey saw the other cat and there was a tense stand off. 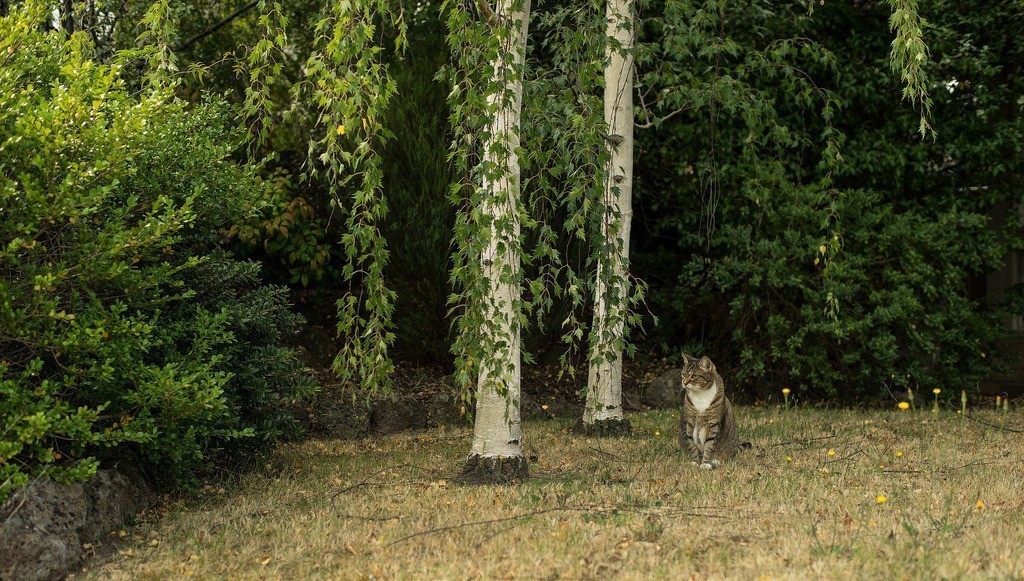 The other cat looked like it wanted to run across the road and start a fight with Jadey. 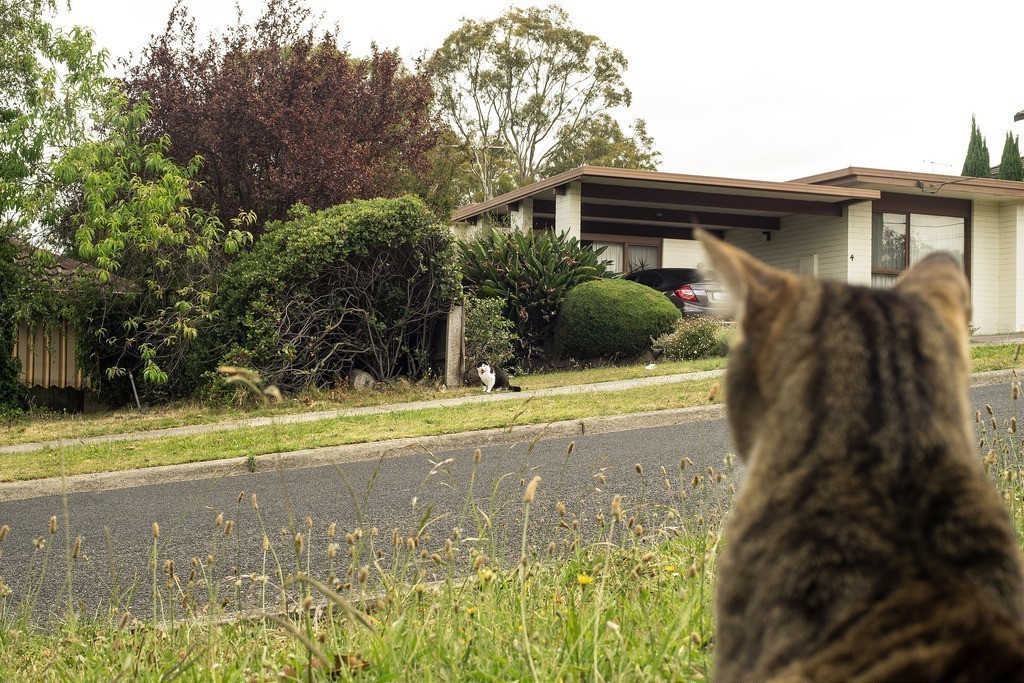 You know what the magpies were doing the whole time? They called their friends and then perched on the power lines above watching the stand off and yelling "FIGHT FIGHT FIGHT FIGHT FIGHT". They're like rabid soccer fans trying to incite a riot. 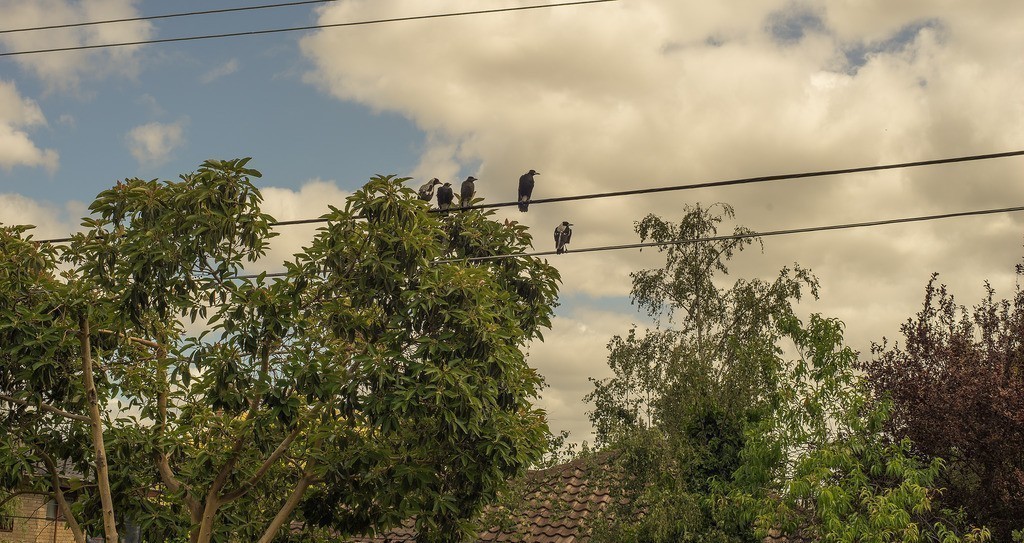 Anyway nothing happened, a car drove past and spooked both cats and they both slunk away when the other wasn't looking. Dignity and pride retained. 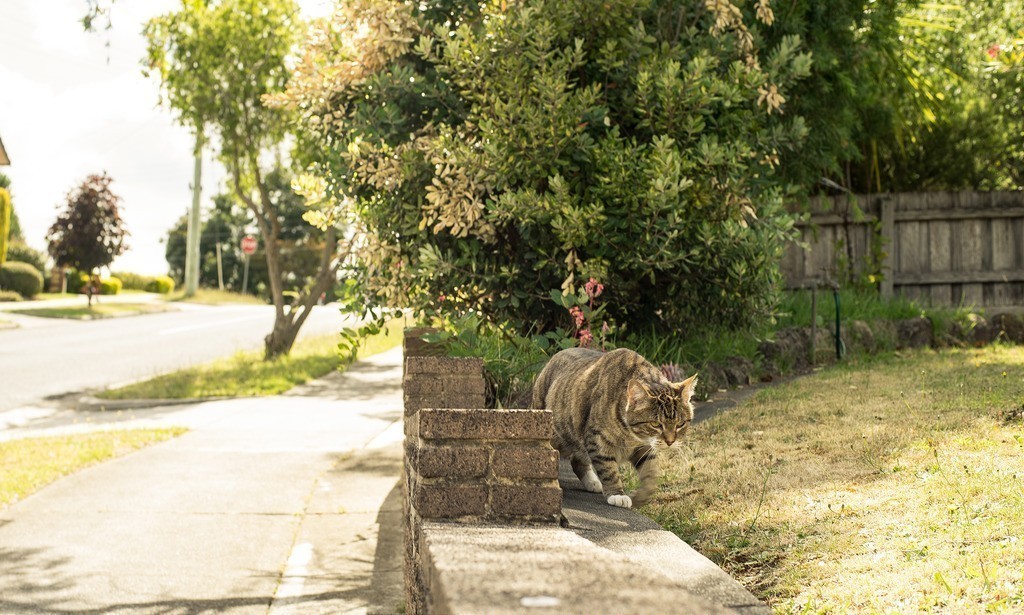 Those magpies knew what they were doing. Here's a crop of the above photo, they were really hoping for an entertaining event. 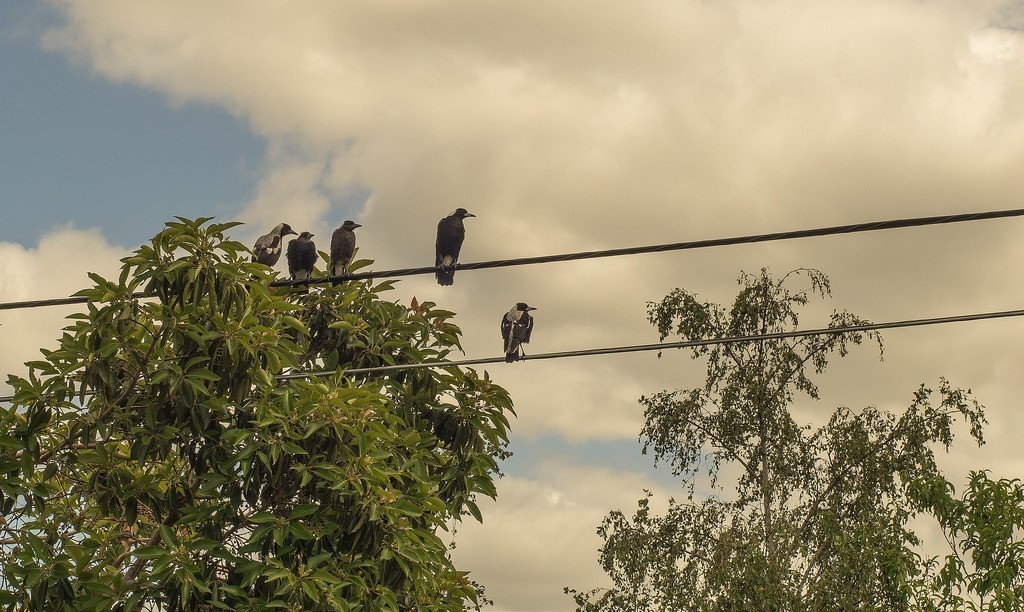 You set me thinking with that one. I know that it's 'murder' for crows, but what is the collective term for magpies?

After extensive Googling, I can report that magpies come in murders too, but also in charms, congregations, gulps, tidings and titterings. This information probably relates to European magpies - I've also discovered that the Australian magpie is a completely different species (which probably does come in a bunch )

My life is boring as hell.

Richard said:
You set me thinking with that one. I know that it's 'murder' for crows, but what is the collective term for magpies?

After extensive Googling, I can report that magpies come in murders too, but also in charms, congregations, gulps, tidings and titterings. This information probably relates to European magpies - I've also discovered that the Australian magpie is a completely different species (which probably does come in a bunch )

I learnt two new things today - the different terms for a bunch of magpies, and the fact that the Australian magpies are a different species... but they're still part of the corvidae family aren't they?

Apparently not - they are now classed as part of the Artamidae family, sub-family Cracticinae (Google again).

They are not in my late friend Derek Goodwin's book The Crows of the World and he was accepted as a world expert on Corvidae, so it looks like a case of early settlers calling them Magpies due to their superficial resemblance to old world magpies. Australian Magpie (Gymnorhina tibicen) is classed in a small group of Australian and papuan crow like birds with just 10 species in the group, collectively Butcherbirds and Currawongs.

This is fascinating. They certainly exhibited crow-like intelligence today despite being a different species.
P

I've been fascinated by ravens and crows since reading raven biologist Bernd Heinrich's books many years ago.

As an aside, if you haven't seen this documentary 'My Life As A Turkey', I highly recommend it. Highly educational and surprisingly quite touching.

Fun series. I think "murder of magpies" might be just about right, given their often villainous nature.

I saw that "My Life as a Turkey", enjoyed it and yet realized that I would much rather hang out with a crow or a murder of crows anyday.

my flamboyance of flamingos scoffs at your murder of magpies
I

Magpies cheering in the stands.. I can so hear it!
K

I love magpies. Around here some fools wanted them killed because they swoop people at nesting times. Idiots. All you have to do is wear a hat with a pair of sunglasses reversed on it, or paint some eyes on the back of the hat/cap. They won't swoop if you are looking at them (or if they think you are). Cowards. However, they also get used to people who live in the street and they seem to know who likes them. I havent been swooped at all since moving here in 2001, and they breed like bunnies. I keep water available for them and the babies in summer as well. Sometimes they get a bit cheeky and want to be fed but I won't do that, they get dependent on handouts really quickly. In the meantime there's lawn grubs and I seem to have a healthy population.

Back to the thread: James, great story, loved the notion of magpies creating their own entertainment with the local furries. So cute!

I was still amazed by how intelligent the wild turkeys were.

I was equally fascinated to read about how they prepared and filmed the program.

I've never had any bird swoop at me.

Humans can be really stupid though, did you hear about the shark cull in WA?
K

TraamisVOS said:
I've never had any bird swoop at me.

Humans can be really stupid though, did you hear about the shark cull in WA?
Click to expand...