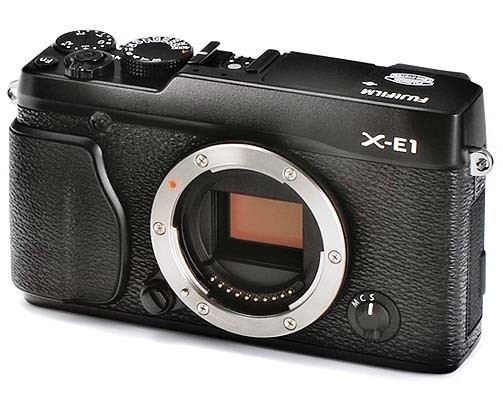 From the leaked images, it's safe to say that the Fuji X-E1 uses the same Fuji XF mount as the Fuji X-Pro 1. It appears to have an EVF but lacks an OVF/hybrid viewfinder. 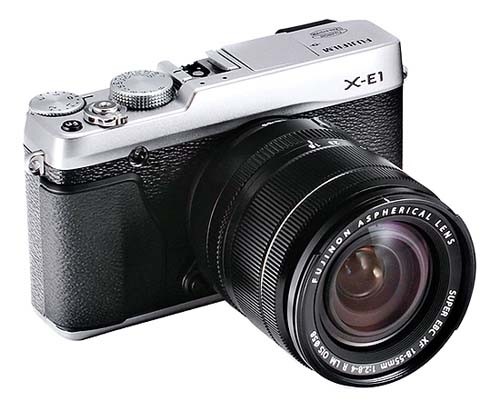 The second image shows the X-E1 with the previously announced image stabilized 18-55mm f/2.8-4 lens. Here's another shot of that lens: 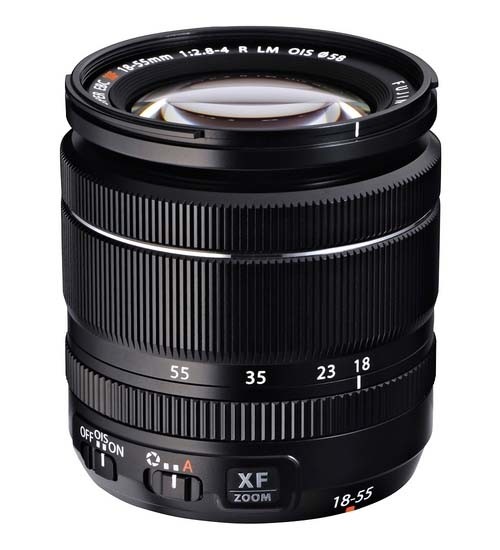 Assuming that Fuji is able to offer the X-E1 at a significantly lower price point than the X-Pro 1, the new camera should attract a lot of users.

No VF, or EVF only? And do I see a pop a flash on the top plate next to the hotshoe? Looks like there is something on the backside's uper left corner which could be the eyepiece of an EVF.

"As you can see from the pictures and the computer-translated text, there is no viewfinder (unlike the X-Pro1)"

There looks like there is an EVF, they probably mean there's no Optical VF unlike the XPro 1.

I was editing the first post when you replied. Definitely looks like an EVF to me. Overall, body looks very close to X-Pro 1 size.
P

Interesting.....
If the EVF refresh rate has improved, then its certainly a nice option.
Price too of course.
R

Nice to see Fuji's interpretation of a kit zoom. Aspherical and faster on the wide and long end as compared to what kit lenses usually are.

retow said:
Nice to see Fuji's interpretation of a kit zoom. Aspherical and faster on the wide and long end as compared to what kit lenses usually are.
Click to expand...

Not to mention much more expensive and possibly not offered as part of a kit .
K

Looking good... (makes a new addition to her wishlist)

Thanks for the headsup on this, Amin. do we think its going to be announced at Photokina next month?
J

I hope the form factor is closer to the X100. When I look at the size of the mount compared to the body, it does seem a bit more compact than the X-Pro1, don't you think?

So, one presumes that the aperture is adjusted using a dial on the rear of the camera in the absence of a ring on the lens (as per the three existing primes).
J

Luckypenguin said:
So, one presumes that the aperture is adjusted using a dial on the rear of the camera in the absence of a ring on the lens (as per the three existing primes).
Click to expand...

I'd think so, and there's a strange "Aperture" switch on the lens near the IS switch, not sure what this is for?

Julien said:
I'd think so, and there's a strange "Aperture" switch on the lens near the IS switch, not sure what this is for?
Click to expand...

I hope that switch makes the second ring on the lens multifunctional. Like the Rx100. More likely it switches between auto aperture (shutter priority) and full manual.
B

Veeeeeery interesting i've held off thoughts on the gxr m-mount because there are no really great wide lens because of the 1.5 crop.

With Fuji also mentioning an Eq. 21mm and 40mm pancake primes, this set up could be really interesting. We'll have to see what rumors and price differentials end up being between this and nex-FF/ FF-GXR set-up will be in 2013.

I hope they've addressed some of the auto-focus issues but this seems like a killer setup, even smaller than the x-pro1 more in line with the x100 which is comparable to the to the omd.

I'd long assumed this would be the direction they'd go and it makes perfect sense since the coming zooms won't work with the OVF anyway, but I have to say the thought of an EVF only X-whatever just leaves me cold. The shooting experience is 90% of the appeal of the X100 and X-Pro to me (I like the IQ, but I wouldn't have bought either just for that. I hope the EVF is better than the one in the previous cams, though, at least in terms of refresh rate - I find those pretty bad for anything other than highly static close up subjects. But I'd guess they'll get that part right.

The lack of an aperture ring on the zoom is really perplexing. I'll have to see how that actually works before passing judgement, but my first impression isn't too favorable there either. Irrelevant for me for this lens (not getting it anyway), but could influence my decision on the eventual 10-24, which is the one zoom I was probably going to buy. I assume the AF speed is more lens dependent than body dependent - if all lenses AF are notably faster on this body I'll be somewhat bummed as an early adopter. Then again, I use the 18 the vast majority of the time and it's plenty fast on the original body.

Interesting times. I'm looking forward to seeing more on the 14mm prime - that's the only part of this next release I'll likely buy.

I like this smaller version of th XP1. I am sure that many customers will also like its price. Oh, and I count 3 rings on the leaked picture of the zoom lens.

Julien said:
I'd think so, and there's a strange "Aperture" switch on the lens near the IS switch, not sure what this is for?
Click to expand...

Guessing, but I think this is used to switch between manual and auto aperture in the absence of a mode dial and an aperture ring.
A

Wot the wox is this?

I can't quite get my head around the X-E1 (perhaps a deliberate rhyme with 'sexy one'). Is it a lower-level X-Pro 1, and therefore part of a growing family of X-mount cameras? Is it intended to be an entry level X-mount camera, or a backup camera to the X-Pro 1? If it is a lower end camera, what compromises have been made to prevent it from stealing X-Pro 1 sales, apart from the lack of hybrid viewfinder? Is it the Fuji equivalent of a E-PLx vs E-Px? Is it meant to be a more mass-market product, and if so, have the controls and functions been dumbed down and mainstreamed-up?

While I'm heartened that Fuji has seen enough return on the X100 and X-Pro 1 to be able to introduce a new body, I'm also cautious about whether they will go the way of m43 and bring out body after body with very few distinguishing features. I would rather see Fuji concentrate on lenses and making a single, superior X-mount body, rather than spreading resources over two or even more bodies.

Having said that, the X-E1 appears to be smaller than the X-Pro 1, and would be rather dishy as a street camera with the pancake lenses.

I'm still hanging out for the X-Am1

Interesting! It does look like there is a pop up flash on there, retow, which I think would be nice.

I wonder if the X-E1 and X200, or whatever it is called, will get the new X-Trans sensor, or will they use an updated 16mpx sensor, but with a light AA filter?

While it loses the cool hybrid finder, it also gains that little pop-up flash. I wonder what the price difference will be. Will this new camera be hobbled in some other way? I just don't see a big price/ function difference between the 2 cameras.....especially IF the new EVF has been improved.

And there is also a post on Fuji Rumors that a new X-Pro2 will be announced soon (!) with a new sensor (!!) and be more expensive.

Curiouser and curiouser.... early adopter blues may kick in for real.

Fuji Got the X-E1