On my Df, The new 105 was "okay", but seemed soft at the corners and not as sharp as the 60/2.8 and 200/4. The latter two lenses came out 12 years earlier than the new 105/2.8. Doing some searches- the DXOMARK tests seemed to verify this first impression. The 60 and 200 tested with higher resolution, lower distortion, and less CA than the 105/2.8. The latter got "higher marks"- a Kickback? Grade on the curve for modern lenses? I could not see it from the performance numbers.

I need to do more testing- but the 105/2.8 VR seemed to have a slight focus shift towards the camera when stopped down. The DXOmark tests state that best performance was at F2.8. I'm not sure if the concept of floating elements apply to an IF lens, but "floating element" was not listed as a feature. Focus at distance seemed less sharp then using the lens close-up. The Micro-Nikkor 55/2.8 introduced a floating element for this reason. I also have that lens.

Maybe a de-centered copy? I haven't shot it, but I seriously doubt Nikon would release a less than super sharp macro.

Moderator
I ran a fence post/slat test- if it were de-centered, I would expect one side to be worse than the others. Performance was even across the field. I've tested a lot (hundreds) of lenses using that fence. Anyone that has sent me a J-3 to work on knows my fence. Looking at the MTF curve given by Nikon, it looked like the image agreed with the chart. Looking at the dxomark test- this lens did not perform as well as the older lenses that I have. I wonder if the VR mechanism has something to do with the performance.

The dxomark shows vignetting when used wide-open to be 2/3rds of stop more than the older AF-D lenses. That is reflected in the images as well. This is a case where I shot with the lens, knowing how my "arsenal" of older Micro-Nikkors perform, and expecting improvements. I went looking for the dxo tests and the MTF curve to see if this sample lens had a problem. It seems that it is just not as good as the older lenses. That is a disappointment to me.
Last edited: Dec 15, 2018

I found another review online that confirms what my quick test shots indicated- optically, this lens is not as good as the AF-D 105/2.8. The AF-D 105/2.8 did not utilize ED glass, nor does the AF-D 60/2.8. The CA numbers of the new lens are counter-intuitive. People buy Micro-Nikkors for optical performance, this lens seems to sacrifice optical performance for the VR function. Maybe in the real world, having VR removes blur when used hand-held. I will not be trading in my AF-D lenses.

Moderator
This lens was released in 2006, at a time when Nikon's Flagship D2x camera was 12MPixels, and the D3 and D700 (also 12MPixels) were being designed. This lens is "good enough" for those cameras. On a D850- it is not good enough to match the sensor resolution. This is a case where the design specifications of the lens underwhelmed Nikon's optical engineers. The Micro-Nikkor AF-D 200/4 was designed years earlier- when film was the media of choice and Nikon DSLR's were 1.3MPixels. I suspect the optical engineers were not as constrained to limit resolution to the sensor in use. The lens I tested- a case where the marketing department wants to load as many of those "ED IF VR NANO" suffixes onto a lens to make it sell rather than rely on actual performance.

20 years ago I had two optical engineers that worked for me- one was fretting over a 5th order Polynomial to get the "wiggle" on an aspheric surface just right for a lens he was designing for a sensor. I looked over and reminded him that the sensor was 320x200 resolution and the lens from my old Kodak Super-8 movie camera would be good enough, a 9mm F1.2 Ektar. I took the camera apart and gave him the lens. Next day- he had it tested, told me this was a good lens. With today's sensors- his original design would have easily matched them.

I'd be interested to see what you made of the Tokina 105mm macro Brian. I use that on my Nikon and it seems wonderful, without the issues you mentioned on the Nikkor.

Moderator
I found the MTF charts for my Micro-Nikkor-Zoom 70~180/4.5 AF-D zoom. The 105/2.8 VR is in that "ballpark" for performance, with the Zoom lens having higher resolution under some circumstances, the Fixed-focal length 105/2.8 VR doing a bit better at the corners under other circumstances. The MTF curves for the Zoom are at each extreme, maybe I'll do a tripod mounted test at 105mm with it. A dark, gloomy, rainy day- good for boring tests.

Reading the reviews, and giving a quick test to this lens, and the problems my friend has with the 70~210 VR-II: I can see why Nikon has lost so many long-time Nikon shooting pro's to Canon. I'm shooting classic Nikkor glass on my Nikons and Leicas, have the 50/1.8 AF-S as it came with the Df. My Df has a 55/1.2 Ai lens on it right now and has for a while. Time to put it on a Tripod and test something made in this century.

Moderator
Nikon | Imaging Products | NIKKOR - The Thousand and One Nights No.18

A nice article on the Micro-Zoom-Nikkor, with a table of all my AF Micro-Nikkors in one place.

Nikon | Imaging Products | NIKKOR - The Thousand and One Nights No.5 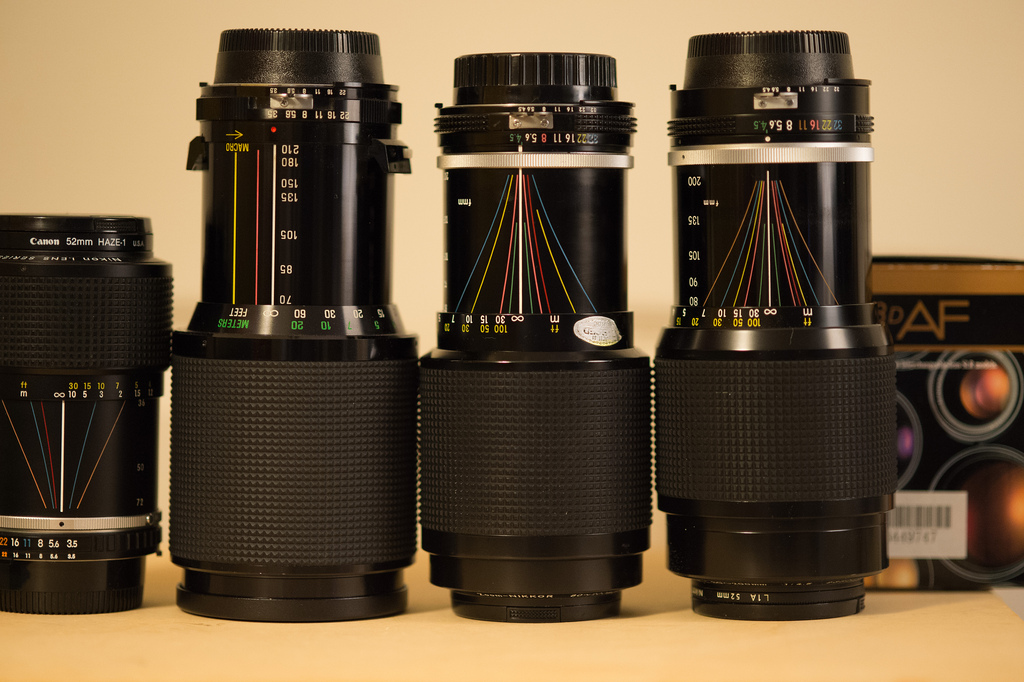 With all those color DOF scales running through the lenses, etches numbers, rubber-inset focus rings... Better than a test chart.
Besides, why call it a lens test of you don't have lenses as the models.

So- the twice-as-expensive, AF-S, ED, VR, IF lens is optically inferior to the lens that it replaced. Not just my test, but others as well. Results are consistent with the published MTF charts. I suppose this is another symptom of the Digital Age- match the optics to the sensor and correct distortion, CA, and Vignetting in Post Processing. Tell the optical engineers the "Build-To" requirements and constrain them from making a better lens. The problem with this lens- it was built to a 12MPixel sensor. Very short-sighted, and it means the lenses need to be redesigned with the introduction of higher resolution sensors. Or- just find a nice lens built before optical engineers were told "shut-up, build us what we told you to."

As a friend says- "I never have any strong opinions, and even if I did- would never think of expressing them."
Last edited: Dec 15, 2018

Nikon Getting drawn back to Nikon DSLRs & old F-mount lenses!