In this part of our Mirrorless Camera Shootout, I'll present some representative crops of various mirrorless camera standard zooms used at the wide end of their respective zoom ranges and then make some general observations about each of the lenses from a user standpoint.

Those amongst the anti-pixel peeping movement will want to skip this post, and those who want 50% crops (rather than 100%) are advised to sit further from the screen to simulate that experience. You have been warned .

The following lenses are examined:

It is virtually impossible to have a perfectly objective, controlled shootout between these lenses and systems. Before moving on with the data, here are some details about the decisions I made in producing the data:

Each of the above decisions affected the outcomes, so I will try to qualify some of the results as they are presented. If you have a better way of doing the comparison, download the RAW files available towards the end, and get to work. I've saved you the trouble of setting up a tripod and shooting multiple takes at each setting (with image stabilization off and self-timer applied).

Here is a sense of the degree of barrel distortion seen with each of these lenses: 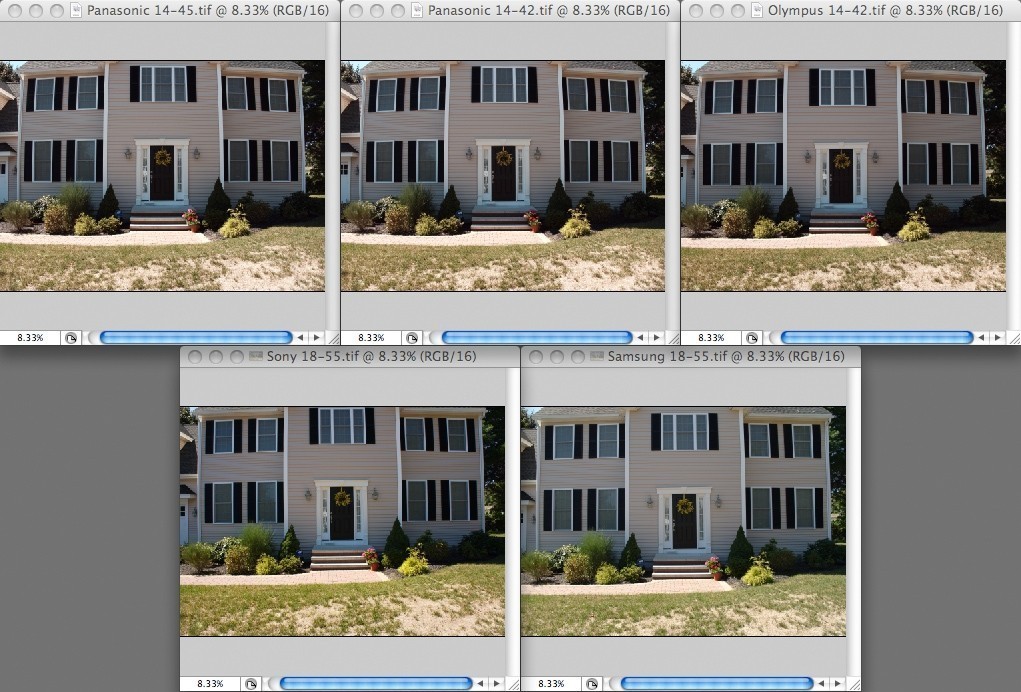 As you can see, the Sony and Samsung have less barrel distortion than the other three lenses. Although I did not accomplish perfectly matched framing with these lenses, the framing after barrel distortion correction is closer than what you see above. 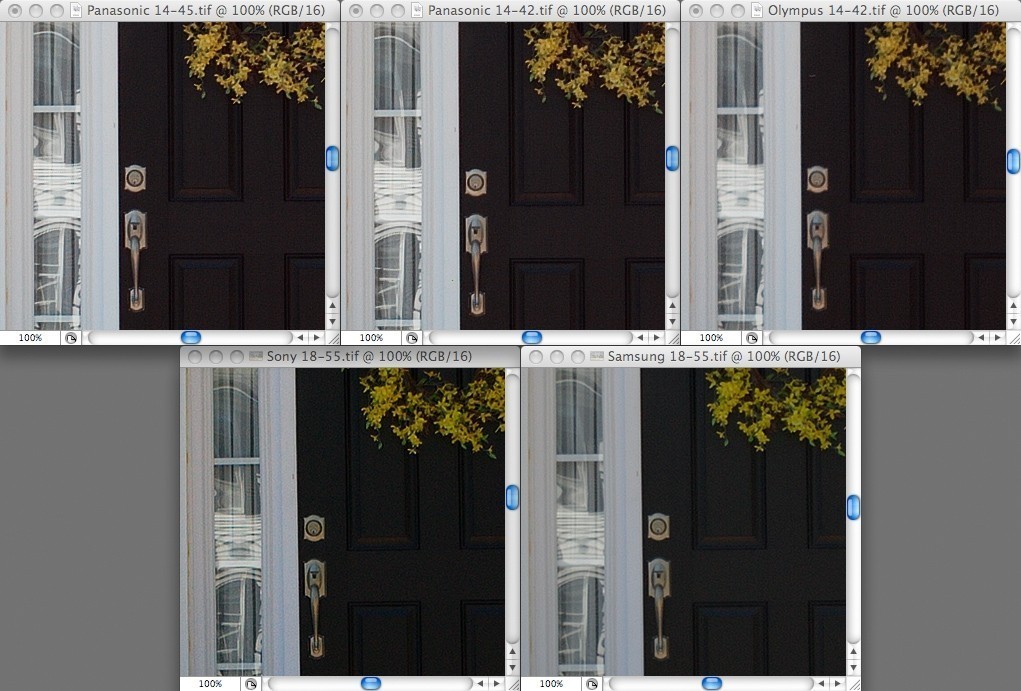 Based on the above, the Sony and two Panasonic lenses are putting in the strongest performance and the Olympus is a bit weaker than the Samsung. Here's how the Sony compares to the Panasonic 14-45 when both crops are viewed at native size: 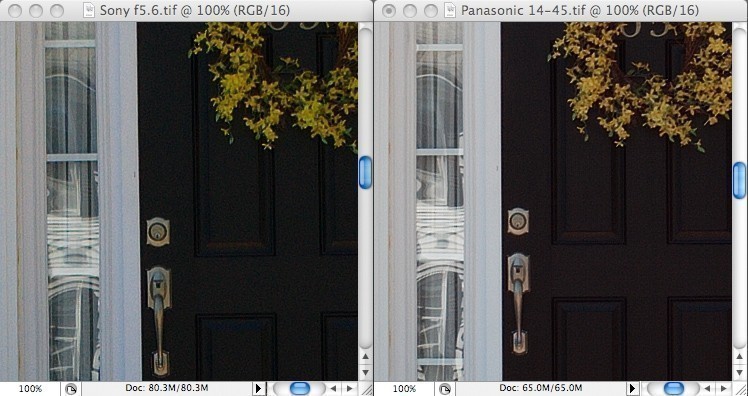 Level of detail is very close.

Next up is the left edge at f/5.6. This is the part of my house where lateral CA tends to come out: 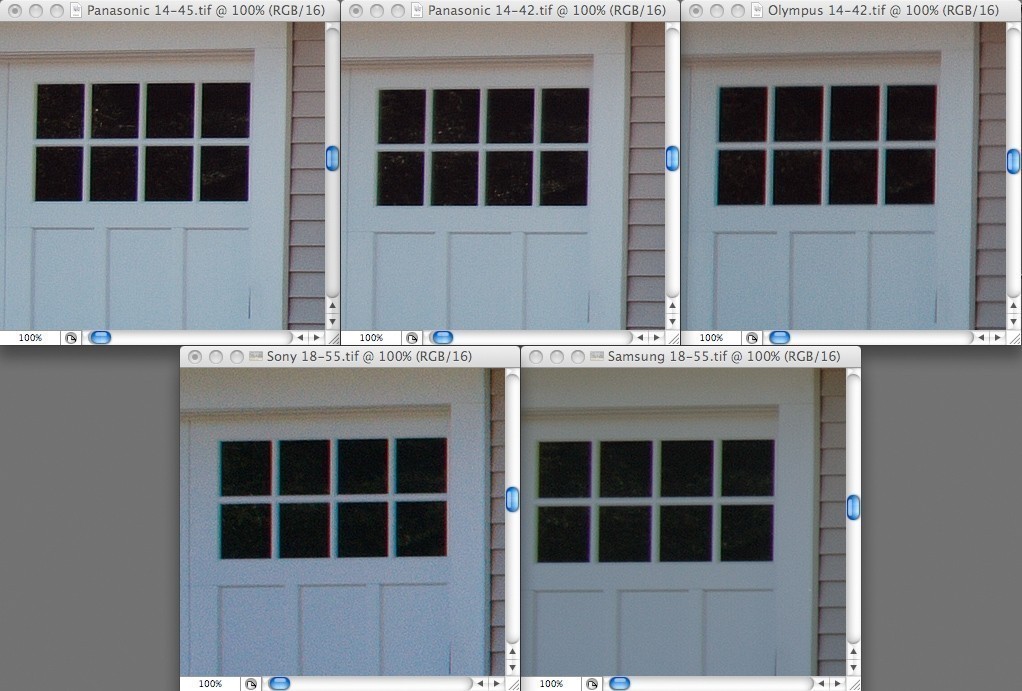 Right edge at f/5.6 tells a similar story with the Sony showing the most CA and the Samsung lagging behind in sharpness: 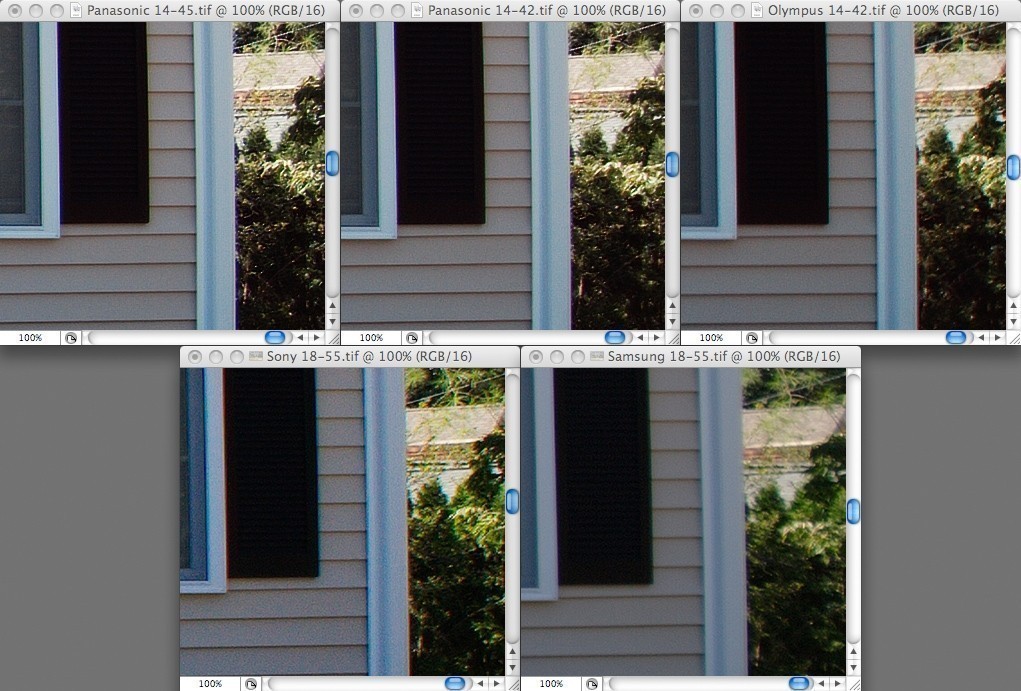 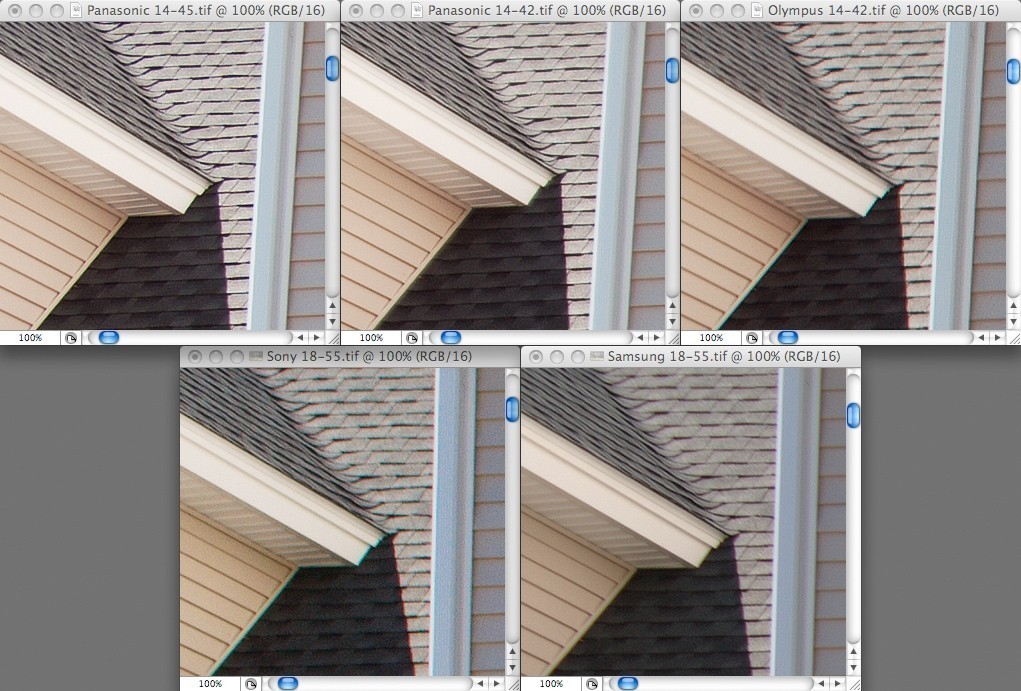 Here two Panasonic lenses look very strong, especially the Panasonic 14-45. However, keep in mind that when you correct the barrel distortion with those lenses, the performance gap narrows a bit. 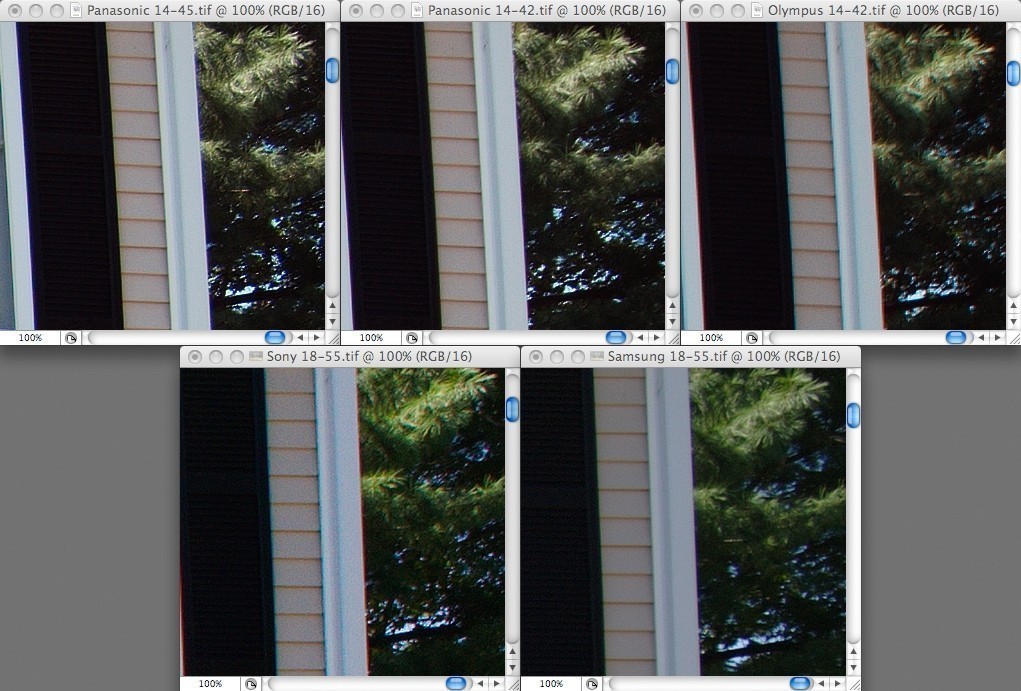 As you can see, stopping down the APS-C lenses brings them closer to the level of the Panasonic.


Other impressions from use:

Size, handling, and build
- The Olympus is a collapsible design, making it the smallest to store. Some will find the need to collapse and expand an inconvenience. There is some barrel wobble with the Olympus lens extended.
- The Samsung lens feels like a lower-quality plastic than the others.
- The Sony and Panasonic 14-45 have metal mounts, while the others are plastic.

Autofocus speed and reliability
- The two Panasonic lenses focus quickly and reliably. Samsung was also quick to focus, if not quite as fast.
- Sony is a bit slower than Panasonic and seemed a bit less reliable as well.
- Olympus is the slowest to focus but reliable.

Depth of field and bokeh
- Both the Sony and Samsung zooms allow for a bit more shallow depth of field than the Micro 4/3 lenses.
- I found nothing objectionable about the quality of background blur with any of these lenses.

Macro
- None of these are true macro lenses, but all are useful for close up photography (especially Olympus and Sony).
- The Olympus and Sony lenses have the greatest magnification ~1:3, while the Samsung is ~1:4 and the Panasonics ~1:5.
- At typical macro f-stops (smaller apertures), all of these lenses show good performance.


Thanks to B&H Photo for providing these cameras and lenses for review.

Please help support Serious Compacts by clicking the button below before you make your next purchase from B&H Photo.

Amin, thank you for all the work that had to have gone into this shootout! Although I am not a peeper, per se, I do find these trials interesting. I take my hat off to you!

I have to second BB's remarks ... your a Stalwart

What a pity the little Oly lens did not fare better its a sweet lens to use, most have said the Pany 14-45 is excellent and your testing bears this out.

Would be interesting a comparative between the Oly 14-42mm and the new Samsung 20-50mm.

Thanks Amin for another great shootout, I think your shootouts give good sense of real-life performance.


I probably is but I think a comparison between the Panasonic 14-42 and the Olympus M.Zuiko 14-42 Mk II would be more interesting. I would expect it would be pretty close.
M

My other observation about this comparison is that the color fringing on the Sony 18-55 makes my eyes hurt. Good thing the 5N and newer bodies now correct it, making it a good lens overall.