but it makes the beer afterwards all the more enjoyable. I'm generally not much of a beer drinker, but nothing is better after working up a lather mowing the lawn on a sunny day. My choice this afternoon was a semi-local brew (Madison, WI.....btw, anyone seen KillRamsey, lately?) called "Hopalicious" and while I find the name too cutesy (and likely trying to appeal to the hipsters), I enjoy a hoppy Pale Ale style brew and this one has a little added horsepower under the hood to boot.

Anyone have other recommendations? I'll also be looking for some autumnal selections to accompany the inevitable leaf raking sessions. So let me know what you like to quaff after the chores are done for the day.
D

Beer plus 110 heat index isn't a good idea around here. Maybe at night. We have a porter out of Gadsden Alabama called Kudzu from the Back forty brewing company. Quit fitting for all the kudzu around here. Also a good dark ale called Truck Stop Honey brown ale.

Sweet water brewing company out of atlanta has a pale ale called 420. I'm not a fan of pale ales or IPA. More of a porter or dark ale. I don't enjoy a good hefeweizen during the summer.

Funny, I'm in a minority among my friends, all of whom drink, but I don't.

If I'm relaxing after chores, the drink depends on the weather. Hot chocolate with cinnamon or chili powder on cold days, peppermint tea, or ginger tea with lemon. On hot days, it's lemonade; ginger beer; or lemon, lime and bitters. I'm quite partial to fruit-infused mineral water, or iced tea with peach or mango. In Japan, I discovered that green tea with burned brown rice is incredibly refreshing.

I don't drink much either. I'm not a NON-drinker in any active sense - I just very rarely drink - maybe a beer or a glass of wine every 2-3 weeks? I think that's probably about right on average. But I do know the occasional pleasure of coming in from some activity (enjoyable or not) on a really hot day and having a really REALLY cold beer. Although at those times, the quality of the beer really doesn't matter - just how freaking COLD it is - just above the freezing point is the best - and it should go down really easily, like a Corona or a Coors or something - you don't want too much taste because you're gonna miss most of it at that temperatiure anyway. Most of the OTHER occasions when I'll have a beer socially, the quality of the beer DOES matter and I don't like it quite so bone chillingly cold...

After mowing the lawn used to be a rare time I'd do that. But then we moved to a condo and I don't mow grass anymore. I don't miss it!

I quite enjoy mowing the grass. Our lawn is about the size of a tennis court, and it's reasonably rectangular and flat, so it's not hard work at all. I actually find it quite therapeutic to walk up and down the grass with the mower on a nice day. The smell of freshly cut grass is lovely, and there's an immediate visual improvement afterwards.

Usually I'll have a mug of tea afterwards. Or maybe a Pimms if we have the ingredients in stock.

Melbourne has long been home to some truly awful beer. For decades, the most popular beer in Australia was some utter bilge water called VB, or Victoria Bitter. 'Bitter' being the operative word. Here's a photo of a local pub that proudly displays its allegiance to this destroyer of stomachs. 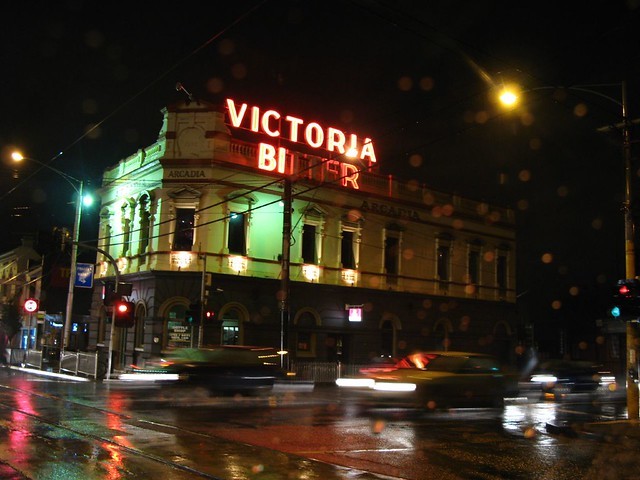 
Then there's another beer called Carlton Draught. So called because once you drink it, the draft from your backside will be smelled all the way in Carlton. No photos of that one.

And of course, there is Melbourne Bitter. Ugh. I'd be bitter about Melbourne as well if I drank that swill.

Another popular beer is Crown Lager, made by the same gunge factory as Victoria Bitter, and which comes in a brown bottle with a gold label. Do not be fooled. Half a bottle of this and I can't stop talking. Never again.

In more recent years, home brewed beer has become more popular, and lots of craft beer labels have emerged. Using a variety of different ingredients and brewing methods, they provide a much welcome alternative to the stomach churning nastiness of traditional Melbourne beers.

I don't mind Asahi from Japan, nor do I mind Tiger from Thailand. I've also had a Tsingtao or two when in China. But classic Melbourne beers are just plain erky. Then again, I'm the type that prefers a creamy coffee liqueur if I 'have to' drink, so perhaps I am not the best judge of beers.

I currently favor the two local breweries, one very tiny (Blue Lab) and one more of a commercial brewery (Devil's Backbone). I'm pretty sure they don't make it to Milwaukee, however. I did try Sam Adams Pumpkin Ale on the advice of a friend, and I was pleasantly surprised. The pumpkin part refers to a hint of pumpkin spice and not actually pumpkin byproducts.

For, on a really hot day, after putting away the reel mower (I live on a postage stamp) absolutely nothing beats a ice cold glass of water. But I'm also sentimental for the beer of my ancestors, San Miguel. It's nothing special, but I like drinking it ice Ice ICE cold when the taste is crisp, it goes down easy, and it reminds me of warm February nights in Manila.

Mowing the lawn - one of my favourite jobs

Just a Heineken light or Michelob Ultra and once in a while Blue Moon for me.
D

Never seen anyone where a helmet on a riding lawn mower before.

Djarum said:
Never seen anyone where a helmet on a riding lawn mower before.
Click to expand...

As motorcyclists say, All the Gear, All the Grass
D

I know some folks around here who ride a mower up some steep slopes. Maybe a helmet should be required, lol. Living in the deep south, more times than not, beer drinking happens before, during, and after the lawn is mowed. Generally one can tell how many based on how straight the lines are, LOL!

I usually get this guy in to do the heavy stuff

Love that Madison stuff, Luke. We can't get it on our side of the river, but I sometimes grab a 6 of Moon Man Pale when I am in Hudson, WI.

My current favorite lawnmower/summer beer is brewed on our other side of the river - Lift Bridge's Farm Girl:
http://liftbridgebrewery.com/#beers/year-round/farm-girl-saison

Starting to feel a bit cool here in the evenings, so may have to switch to something darker soon.

It's heart-warming to read about a beer from the midwest that uses Belgian hops and they suggest that it goes well with Thai food. It's like someone was brewing a beer especially for me.

BillN said:
Mowing the lawn - one of my favourite jobs

I want one of those (actually a small one, a "yard bug"). I reckon it would pay for itself over time. Instead, I have the Jims once a fortnight at $40 a throw. Helmet keeps your head safe. Nice touch.
You must log in or register to reply here.
Share:
Facebook Twitter Reddit Pinterest Tumblr WhatsApp Email Link

Why I would suck as a commercial photographer