Dear Kelly,
There is evidence building up that the camera that I have is one of your father's inventions. The attached sketches "show"my camera.
Are you working on a book about your father's amazing contributions?
I contacted PBS to get their credible team for their series History Detectives to assist me put together the different pieces of the puzzle.
This could be a great way for you to dissiminate information about your Dad and his work. If a book is inthe making,a show on your father's work would greatly assist you in getting out the news about the upcoming book.
Allison Wurthman is an Associate Producer at PBS,and she has shown interest in doing some research on my "mystery camera".
Please by so kind to allow her to contact you for additional information. I would greatly appreciate it.
I have done my share the past 24 hours in posting threads on three photography websites to inform people all over the world about your father's work.
Rangefinderforum.com has 25,000 members while photo.net has half a million members. Posting there about your father's work has spread information on him via google.com for millions of people to read about.
While I am a Statistics Professor at the University of West Florida, I love the history of cameras and I appreciate their wonderful and often ingenious designs.
If you allow me to call you, that would be greatly appreciated. I am fascinated by all of this.
Sincerely,
Raid Amin
==========================================
R

Part of his reply to me was:

...
Please do not contact me again. I regret ever having made contact with you. Good luck to you and do take care of the camera.

You can tell your uncle that I have donated the camera.
D

Thanks for the reply. My uncle and I don't speak, we have deep fundamental differences of opinion on matters of ethics and integrity. I'm not familiar with the entire dialog between the two of you but none the less it is regrettable that it didn't end better.

My sister and I have several of Grandpa Doug's patents some hanging on walls some in storage if I can find any pertaining to the camera in this post I will post them here.
D 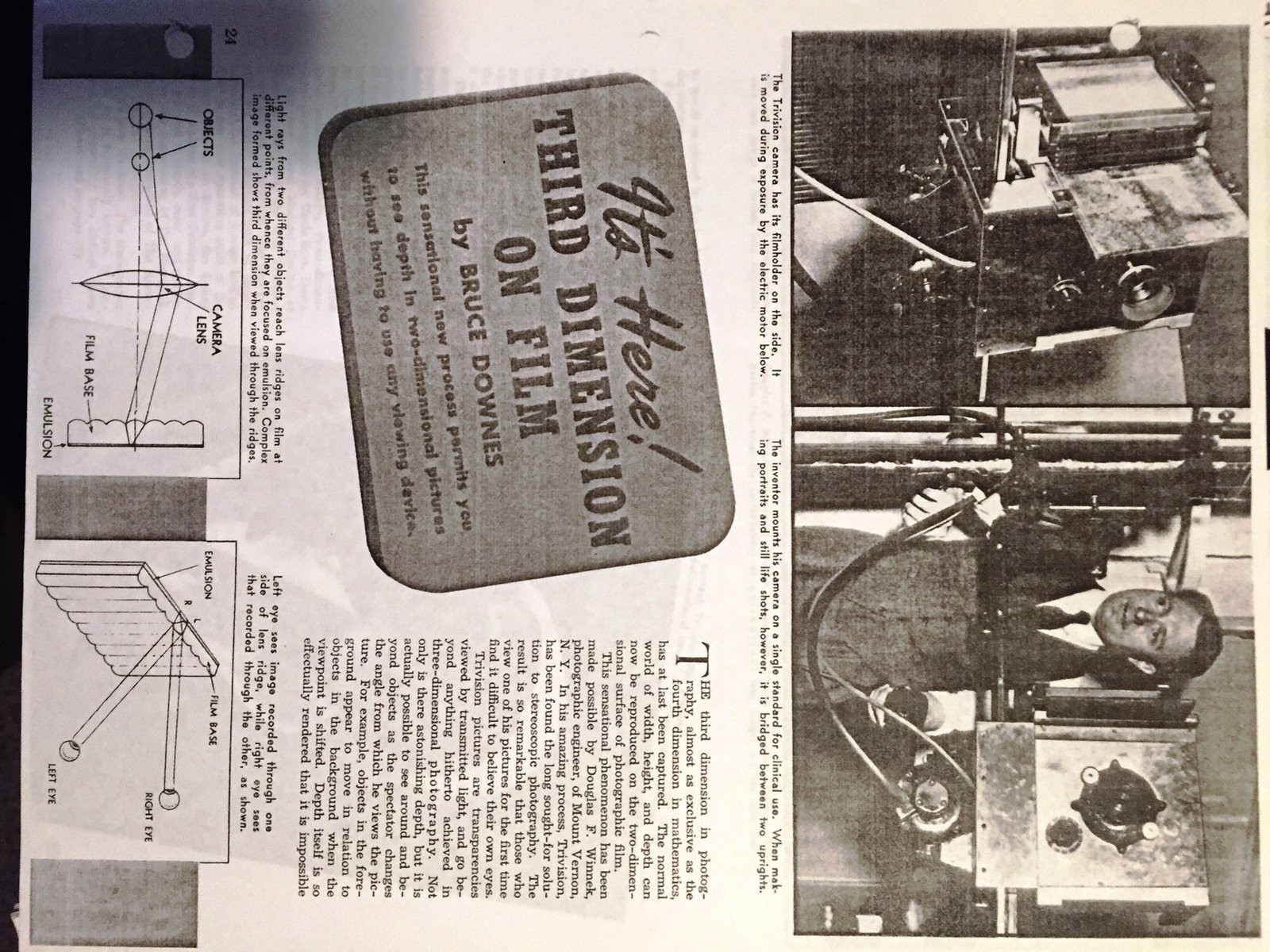 Here is part of an article about his work. Just before this article came out the USMC had contracted with him for tri-vision (3D) Aerial Topographical Mapping, and he was already working with the U.S. Navy. Most if not all of his work was done with transparencies and the effect required layers and the lenticulation although it was first done with glass plates it really started to come of age when film transparencies were used. Sorry the pic came in sideways, can't seem to fix.
D

Here is a pic of one of one of his test shots from the late 80's early 90's. You lose most of the 3D effect in translation but it give a little bit of glimpse of what could be done, with his process and equipment. 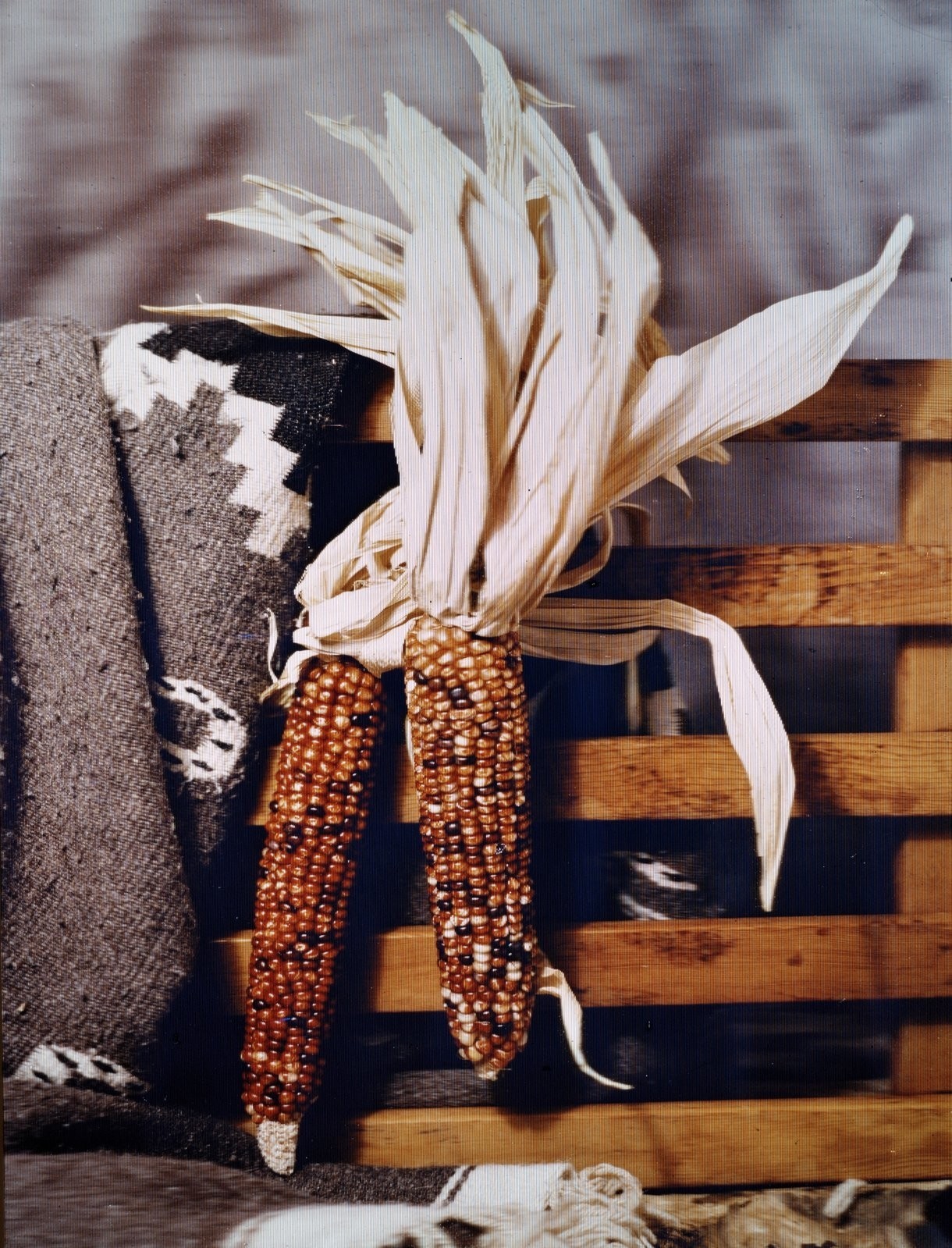 The Naval Aviation Museum may like to get copies of what you have, Dwight.
R

I have never seen any results with your grandfather's camera. Cool.
D

If you can get me contact information I would be happy to share what I have and am sure other members of the family would as well.

One of Mr. Winnek's daughters was in Pensacola recently. Is it your mother?
D

I think that was my Aunt Holly, she is just moved to Florida from the Bay Area (San Francisco) with her husband. My Cousin and her family live down there.

I will email you shortly.

Dwight- your Grandfather was both a brilliant man and unsung hero. The Greatest Generation. Looked at what he was good at, and how he could best serve his country with it.

The camera is a fascinating piece of history, and an amazing optical feat. I look forward to visiting the Museum this Summer.
R

I hope that having Mr. Winnek's invention (the trivision camera) being showcased by the Naval Aviation Museum, with a planned tour too, this will hopefully bring to the public a snapshot of Douglas Winnek's genius mind and his products.
Last edited by a moderator: Dec 13, 2015
D

dskjlf said:
View attachment 3762 Here is part of an article about his work. Just before this article came out the USMC had contracted with him for tri-vision (3D) Aerial Topographical Mapping, and he was already working with the U.S. Navy. Most if not all of his work was done with transparencies and the effect required layers and the lenticulation although it was first done with glass plates it really started to come of age when film transparencies were used. Sorry the pic came in sideways, can't seem to fix.
Click to expand...

In 1984 I signed onto a dynamic topography project, to computerize the process. The physical process involved multiple underexposed x-rays taken at different angles, with the transparencies cut a certain way, and displayed stacked together on a viewer with a knob. Turn the knob and you can walk right through a solid object with good resolution. I suppose that process borrowed from this research and the research of others...
D

Great pics and thank your contribution to the thread.

I understand your comments about distancing one's self but I feel it's a part of world history, good bad or indifferent, its our History and as such influences our future. I'm proud of my Grandfather's contributions to the war effort and to the art/science of photography as a whole.

My young son shared with me that at school that day he had leaned that my iPhone had more technology in it than all of the Apollo Missions combined. I replied, that may be true but if not for the Apollo Missions much of the technology needed to advance science to get to the point where we could build iPhones wouldn't exist, one might not have happened without the other.

The actions of our ancestors are constantly being questioned and dissected but with a perspective that is jaded, as we don't live in the time the History was taking place, we live in a time that is a result of that History. Furthermore we tend to look at isolated incidents or moments in time that may have or may not have significantly influence the time we live in, not looking at the events holistically or in there entirety, and certainly not with a clear understanding of that influenced that moment in time (a difficult thing to do).

I'm not suggesting that dropping the bombs was a good thing nor am I saying it was a bad thing, it can be argued either way and I wasn't there in 1945, I wasn't a soldier, a sailor, or marine, I did not fight in the war on any side etc... I wasn't born yet. What I do believe is that the people at the time making decisions on either side of the war Japanese and American believed what they were doing was the right thing to do, morally and ethically and t served their specific interests at the time. I don't have to agree, I don't have to like it, I don't even have to accept it, but I do hope to use my understanding of the events to the benefit of the present day and to our future.

Enough of my soap box.

Your pics are really wonderful, I particularly like the night shot, and the contrasts between the ruin and the bright green grass.
Respectfully,

The war was over a long time ago, and using these weapons accelerated that end. It is that simple.

I've worked with scientists and engineers from the "World War II generation". The "Can-Do" mentality to get things done and have it work was inspirational. Best advise I ever received "Forget the requirements, build the best system that you can build and if it is good enough- someone will use it".

Leicaplace is a photography forum, a camera was donated to the Navy Museum. We are lucky that the Grandson of the inventor has posted so much information about it here- this information is not available anywhere else.

Leicaplace and Amin's other forums have a "no-politics" policy. This thread will not go into that direction.
R

I agree. Stay on the topic of photography, and let politics be discussed at some other websites.
R

These three images each have over 13000 views from January 2016 until today.
D

Amazing, it's wonderful to know so many have an interest in my grandfathers work. Thank you again for including me in this thread and your contributions to keeping my grandfather's life's work in front of people passionate about photography like Grandpa Doug was.
You must log in or register to reply here.
Share:
Facebook Twitter Reddit Pinterest Tumblr WhatsApp Email Link

Leica Pair of Noktons on the M9 at the Naval Museum in Columbus, Georgia