I bought my camera a year and a week ago, and in that time I've made quite a few photos of my home town, Rotterdam. I figured it's time to show you a little of where I'm from.

Rotterdam is the second largest city in the Netherlands, with a bit more than 600.000 inhabitants. It was founded around 1260 on a dam in the Rotte river (hence the name).
This is the Rotte river, just before the dam: Its character is strongly influenced by its port on the delta of the Meuse and Rhine rivers; from the 1960's untill 2004, it was the largest port in the world, and since 2004 it's either the second largest (based on cargo weight) or third largest (based on number of ships), with Shanghai (and Singapore) being larger. The port serves as a gateway to Europe, and in particular to Germany's industry. Smaller ships like this one sail between the port and the European back country, and huge container ships connect the port to the rest of the world. This is the very start of the still-active seaport, nearest to the city centre. This part of the port is quite aged, as you can see by the oldfashioned crane. Nowadays it's much more automated and on a much larger scale. The port extends westwards from the city centre, on both sides of the river, for another 30km / 20 miles or so, becoming ever more modern and large-scale as you get nearer to the North Sea (there's actually a land extension that goes about 10km / 6 miles into the sea to make room for more port activities).

The other thing really influencing Rotterdam's character is the modern architecture; it's one of the few European cities with a skyline that's dominated by skyscrapers. We owe that to the Nazi's; in May 1940, when they invaded the Netherlands, we put up more of a fight than they expected, and the paratroopers they dropped in Rotterdam were held back by the Marine Corps. To convince us to surrender, the Nazi's threatened to bomb Rotterdam indiscriminately. The government surrendered, but for some reason the bombing went ahead anyway, wiping out almost the entire city centre. As a consequence, there're very, very few old buildings left in the centre, and they were replaced by modern architecture.

SS the "Rotterdam" was a real symbol of the resurrection of the city. It was built in Rotterdam in the 1950's for the Holland America Line to make transatlantic voyages (mainly for immigrants). When it started its maiden voyage, tens of thousands of Rotterdammers watched it sail out and my dad still remembers the pride everyone felt that Rotterdam was once again capable of building great ships. Its transatlantic liner days only lasted about a decade due to the advent of airline travel, and it was a cruise ship for decades before coming back to Rotterdam. The oldest part of Rotterdam that's still standing is probably Delfshaven, which means "harbor of Delft". It was originally the harbor of Delft, a nearby city which used to be much more important than Rotterdam, when it felt threatened by Rotterdam's superior access to the rivers, so they dug a canal to the river and founded a port. It's now been absorbed by Rotterdam, and it has a very pretty centre which survived the bombing. Many people in the Netherlands think of Rotterdam as a grim and gritty city, but having grown up there I really think it's not that bad. There're certainly a few neighbourhoods where I wouldn't like my sisters to walk alone at night, but most of the city isn't dangerous at all. It does have a very diverse population, with some 170+ nationalities (almost 50% of the city's population is from another country originally).
One of the things I like about the city is that you can be amongst the skyscrapers one moment, and then round a corner and you're in a small pocket of old buildings, having a completely different character. The original city centre was around the Oude Haven (Old Port), where the Rotte river joined the Meuse. A few buildings here survived the war, among them the White House; considered by some to be Europe's first sky scraper, it's 43m tall and was Europe's tallest office building when it was constructed in 1897/'98. Now this area is one of the best places in the city to go out and enjoy an afternoon or evening on the terraces. The South side of the river has a different character than the North side. The North side is much older and it is much more of a "big city" with all its amenities. The South side only started growing when the port started getting really big in the 19th century, attracting workers from the countryside, and it has always retained a sort of "village" feel. It's perhaps a bit poorer than the North and there's less to do, but it's also the home base of our most famous football club (Feyenoord) and the place where the "true" Rotterdam accent is spoken. In the last few years, the part just south of the Erasmus Bridge is being developed with lots of skyscrapers, restaurants, theaters and more. 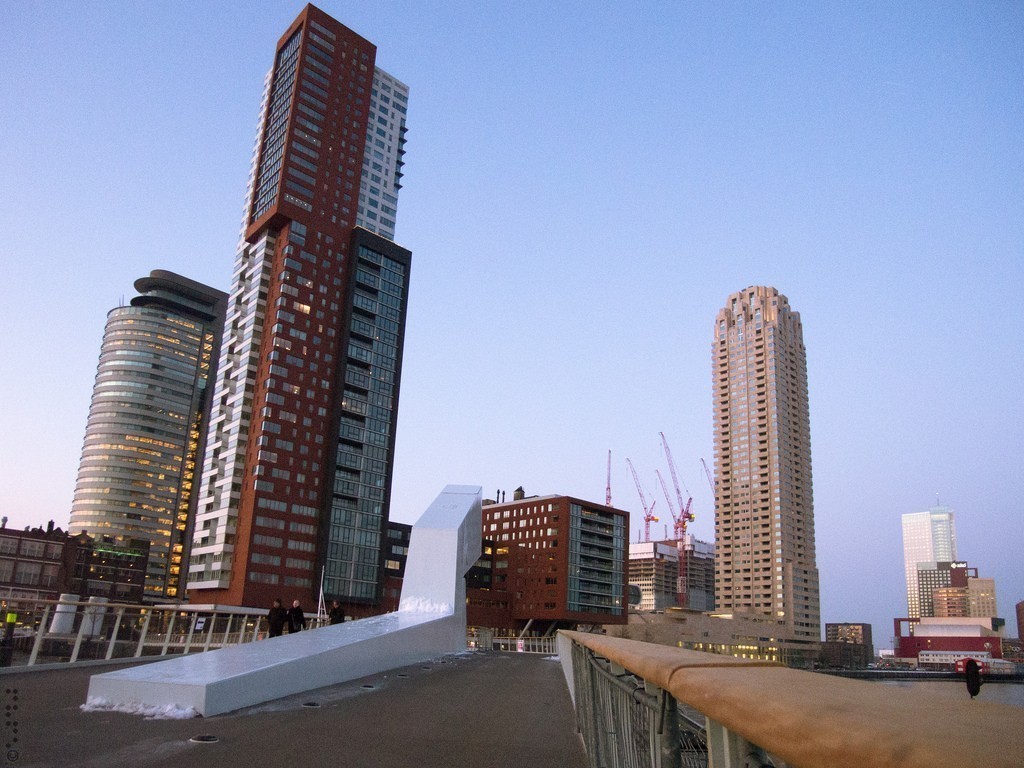 The bridges over the river play an important role in the city; I already showed you the very modern Erasmus bridge (opened in 1996), which is one of the architectural features almost all Rotterdammers really like. There're also older bridges, particularly between the North Island (actually a part of the South that was made an island by digging a harbor around it) and the proper South. The old metal railway bridge (from the 1920's) is called "de Hef" (the lift), and its lifting feature was to allow tall boats to sail through. The part of the railway bridge that crossed the actual Meuse river has been broken up now that the trains go through a tunnel underneath the river, but the Hef is a very popular landmark in Rotterdam so it's been preserved. This photo was taken from another bridge over the same harbor called the Queens Bridge, also built in the 1920's. The little house you see on the side was for the bridge guards who opened the bridge for shipping traffic. The building you see in the distance is also called "de Brug" (the Bridge) because it's suspended over the old Unilever factory, it now contains Unilever's Dutch headquarters. And this shot of the Hef bridge was inspired by Duane's excellent Eiffel Tower photo: Our Central Station is being updated significantly, and I liked this shot of the skyscrapers surrounding it, as seen through the construction work The Euromast is one of Rotterdam's most recognisable buildings, built in 1960 and heightened in 1970. It's 185m tall, but not as tall as this narcissus The largest park in Rotterdam is the Kralingse Bos (Kralingen's Forest), which also has a large lake which is a result of peat being dug out of the swamp that the Netherlands used to be and the remaining hole filling up with water. It's a great place to study, or skate when it's cold enough [added on june 2nd 2012]
the "Red Apple" is an early example of a new type of architecture which can be seen in lots of new buildings here: it's no longer enough to just be modern and impressive, because that won't get you noticed in this city (unless you can afford to build taller than anyone else), there has to be an element of playfulness in the design as well. Here, that was achieved by giving the tall tower an irregular pattern of red tiles, which also increase the sensation of height because they get narrower, and by seemingly suspending the other part of the building over a base that resembles an old warehouse. Another example of this trend are the two buildings in this shot, which are both still under construction. The silvery one strikes me as a metallic interpretation of Gaudí's "La Pedrera" in Barcelona. Did I tell you that this city's center is ALWAYS under construction? There're always several major construction sites with city redevelopments going on, which can be a pain, but for architecture lovers like myself it's also a joy to see what they come up with next (thankfully the city's fairly sensible in not taking down valuable buildings). The Schielandhuis, from the 1660's, is by far the oldest building in the city center that survived the bombing. It now houses a museum on the history of Rotterdam. The front is very impressive, really ornate and grand, but I liked all these shutters at the rear, reflecting the evening light at different angles, and the modern office building behind it (it's actually surrounded by tall modern buildings). What a beautiful city and series of photographs! Thanks for the tour

You have shown us your city quite beautifully.

It won't replace a vacation, but it sure helps!

Lovely work of an interesting city.

Well done, Bart. Although I'm not too familiar with Rotterdam, I do recognize several spots from the few visits I made. I really enjoyed the night shot!

Your pictures really are very good. The last one made me smile.

I love the photo of the bridge! Definitely my favorite! Thanks for sharing!

Armanius said:
I love the photo of the bridge! Definitely my favorite! Thanks for sharing!
Click to expand...

there're 3 or 4 photos of bridges in there so I have no idea which one you mean, but thanks!

I think Rotterdam is a bit of an acquired taste, if you like modern architecture you'll probably love it, if not you may well never "get" it. It's also a very dynamic city, change is really a constant here. If you've been away for 5 or 10 years and you come back, parts of the city will be unrecognisable to you. There're also lots of festivals in the summer, keeping the city from being "just a work city".

Wow. I really enjoyed that. The photographs illustrated some very revealing text. Thank you.

Wow, thanks Bart. I'm a bit slow coming to this one, but so glad I did. Now, I have the most crazy urge to visit the Netherlands. I've never been to Europe but I want to go...

Added a few photos to the OP...

Sue, just go for it!

Thanks for the tour, very nice city and bridge shots. Now I can imagine the city when I heard the name....

A great series of photos !