Documentary My home town: Talent, Oregon, after the apocalyptic wildfire

The small Oregon town where I have lived for two-odd decades, Talent, Oregon, was overrun by a wildfire two weeks ago, on September 8. The fire was fueled by unseasonably hot and longer-than-normal weather conditions - and a ferocious (nearly 50 mph) wind. It's been extensively documented in the American press and news outlets. A large portion of Talent - possibly between 35 and 50 per cent - burned to the ground within hours. Strangely, the capricious path of the fire meant that certain neighborhoods were spared and remain unscathed. I was among the fortunate as my house ecaped the flames entirely, though hardy (possibly foolhardy) friends who stayed during the conflagaration said that many homes and neighborhoods owe their survival to changes in wind direction. I had to evacuate the day of the fire - as did most of the town - and most of the neighboring town, Phoenix, which unfortunately suffered even heavier fire damage. I was camping out at different friends' homes for a week and a half before I could return - before electricity and water were restored - and another week elapsed before major roads and highways - which had been closed due to downed power lines and flaming natural gas lines which threatened explosion - could be dealt with safely by emergency crews.

It took me nearly two weeks before I felt capable of picking up a camera and taking some photos of the devastation which occurred only a few blocks from my home. I felt like an uninvited guest, walking amid the rubble of what had been other peoples' and neighbors' lives, but was now reduced to, literally, rubble. I've seen many photgraphs of the apocalyptic destruction left behind in some war zones - but never expected to see it where I live.

All the photographs were taken along the main street of town, Talent Avenue - one side of which was burned and destroyed - and the other side of which, providentially and possibly ironically as well, has survived intact. This is a wider view of what used to be a neighborhood-- 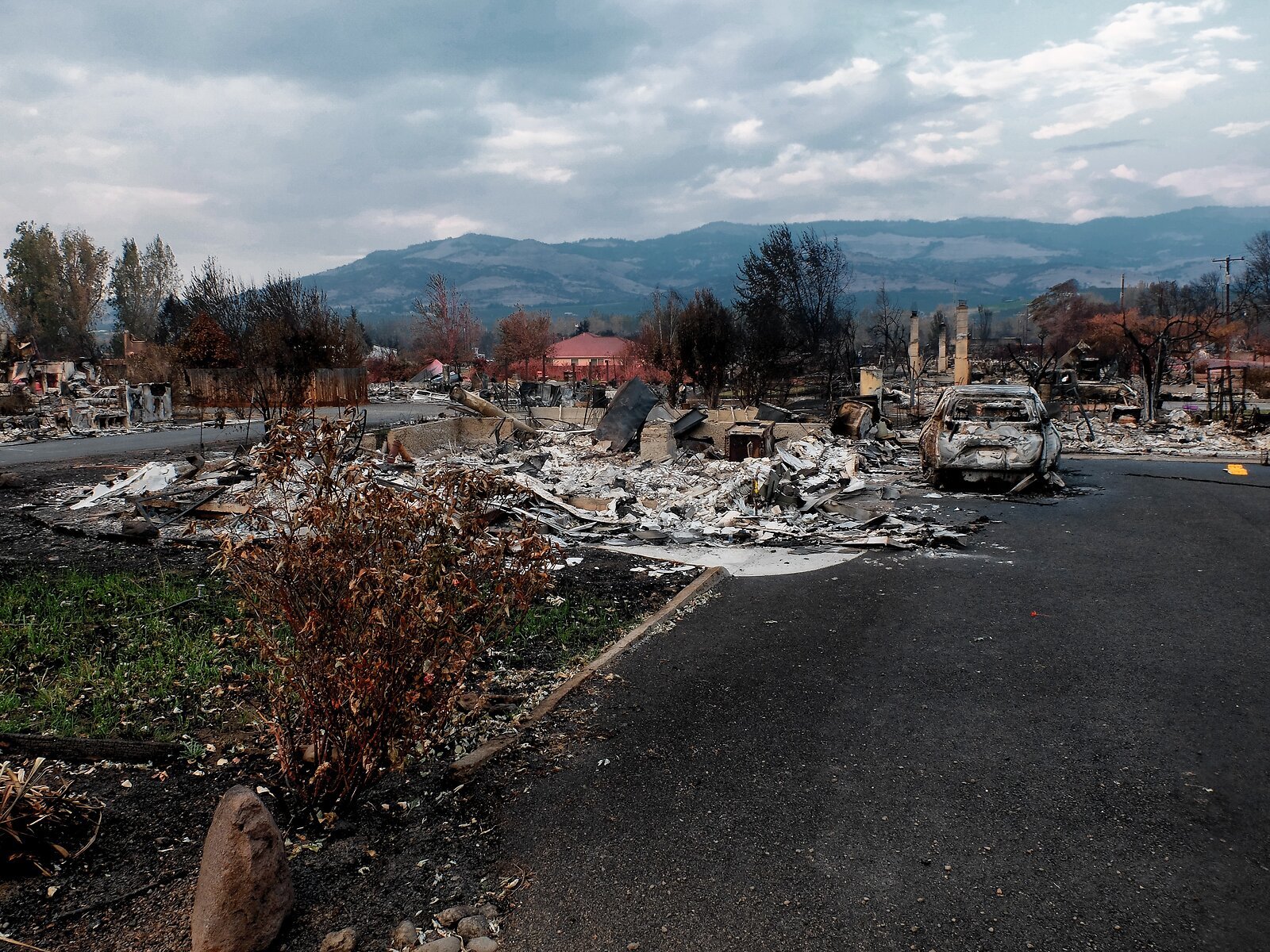 As the pictures show, some things survived surprisingly well, others not at all-- Here in the foreground, the remnants of what was once a fence--- 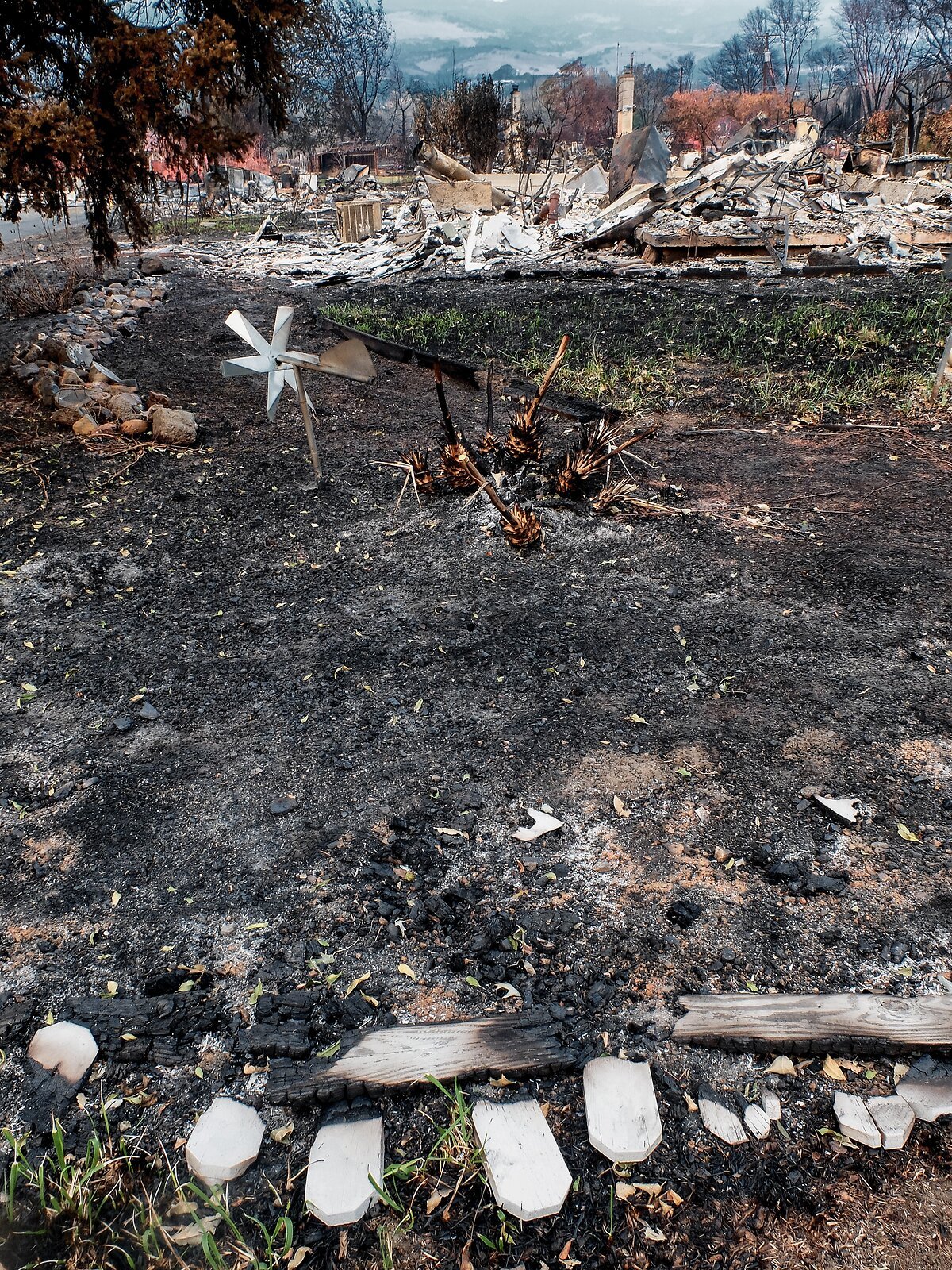 Many verdant trees which filled the town burned; here and there some seem to have partially survived-- Taking these pictures was difficult for me. Looking at them hasn't been easy either. But as I think we all know, there is something disturbingly - what's the right word? addictive? seeing images of destruction. Maybe the relief that it happened to someone else? In my own case, though I survived, close friends lost everything when their homes or apartments were burned to ashes, shortly after they managed to evacuate - all of them safely, providentially. Surprisingly, in the small municipal park on the other side of the street, bushes and plants are flowering, some showing the beautiful fiery changing colors we get in the fall-- 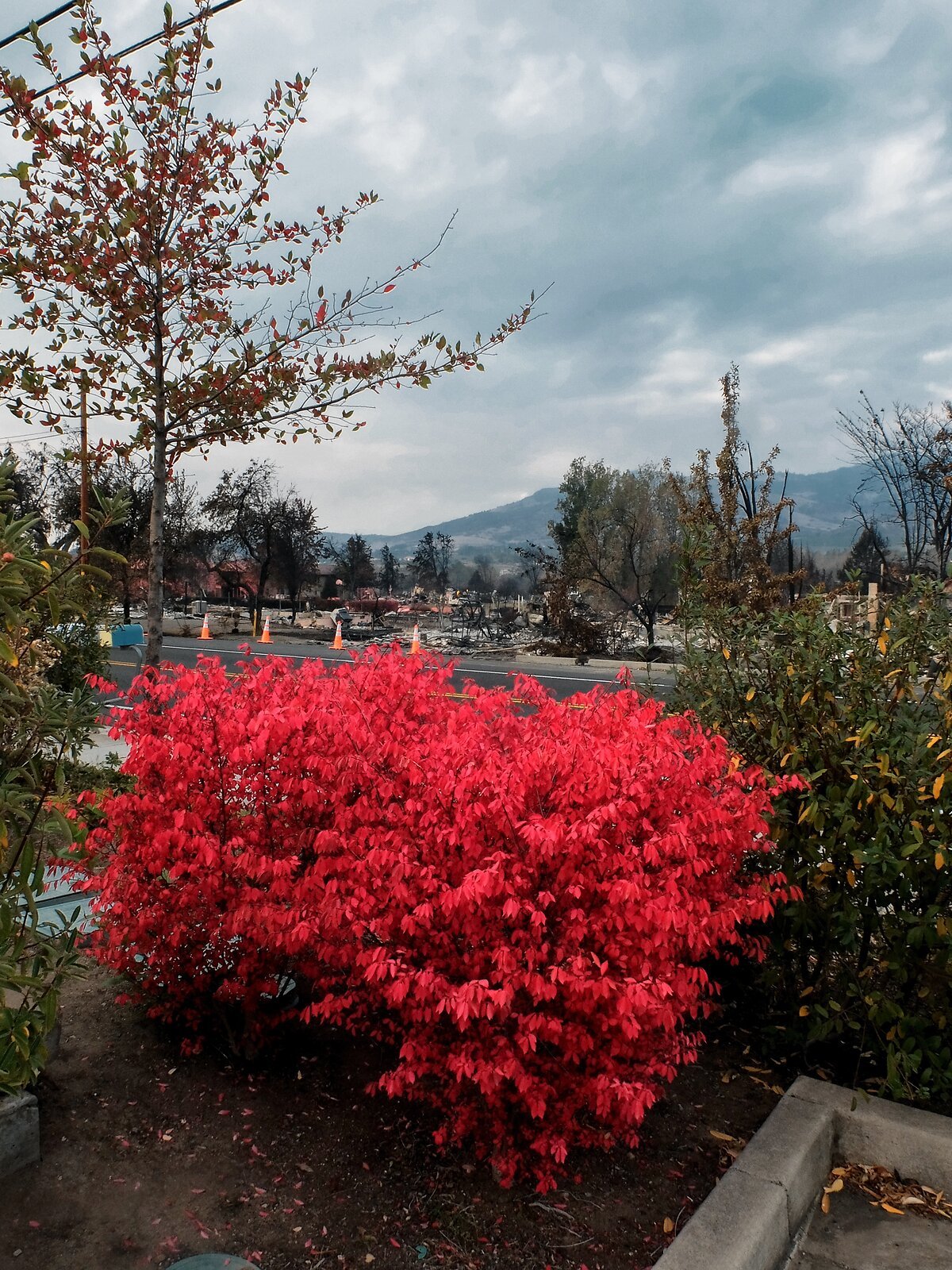 And here the green leaves in the park are an obvious and very strange contrast of life as it was going on, literally right across the street from a small apocalypse-- 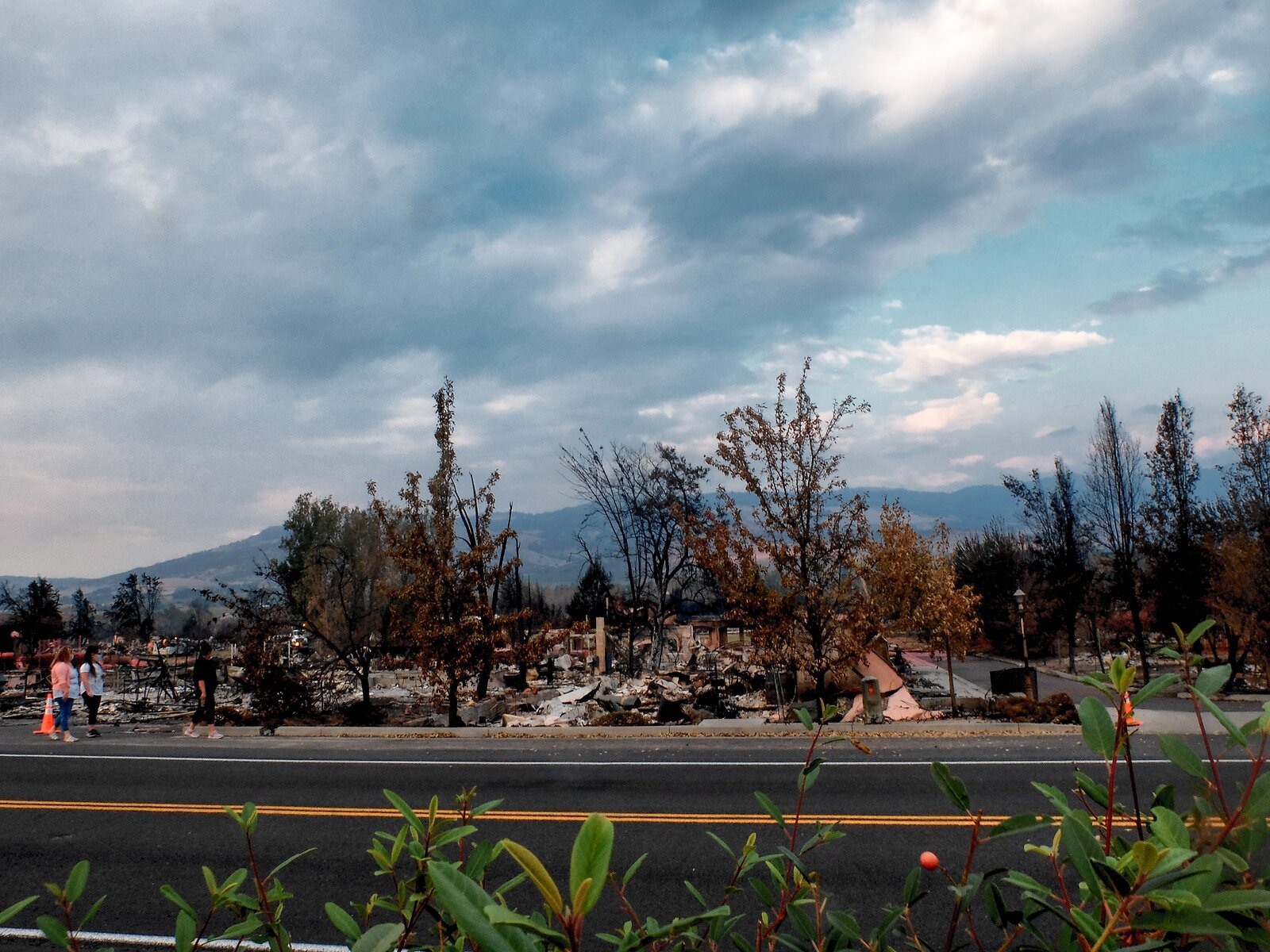 There is a second set of photographs which I took, perhaps a block away from here --- all in the residential area which borders the small downtown business area - which I will post momentarily, but I'll stop this first installment here, in the interests of not having an overly image-heavy post which might load slowly.

This is Part 2 of my post, taken on the same street, the following day (a few days ago).
First, in the same residential neighborhood, the remains of what was once a home. It's unspeakably weird to see and walk by (or drive by) large stretches of a street that was once filled with houses, but now the only things standing amid the rubble and ashes, are chimneys.

I have no idea what the now-twisted-and-abstract metal sculptures, in the foreground of the next shot, once were - but they belonged to the same house--- Here and there, I saw small bowls of water and (almost always) cat food - set out, presumably, for missing pets in the hope that they may have escaped during the craziness of the general human exodus, and be in need of nourishment. Or, possibly, the samaritans who left them were not putting them out for specific animals - but for any and all survivors. As I mentioned before, it was really, really strange to find myself standing in, on or near what had been someone's home, taking pictures. I imagine the feelings will persist, and not merely when one may be photographing - but just standing there or walking by. There has been an immense outpouring of human empathy and aid among neighbors and strangers, and hand-painted signs have begun to emerge as well, urging the Talentonians (my favorite invented adjective for those who live here) to continue breathing, to come together, and to, by whatever means necessary, aid in the rebuilding process.

But standing there, in the middle of this--- I know it won't be easy.

Poignant narratives, Miguel, and seeing the documentary evidence is gut wrenching. Having seen on the news that the devastation stretches from southern CA up through OR and WA puts it on a scale that is almost unimaginable.

Thanks for posting Miguel.

Very well done. Especially with it being such a hard thing for you to do.

after a few weeks of not having a single crying episode, I was beginning to think that the pandemic, economy and social unrest had depleted my tear ducts.

Sending healing vibes your way Miguel, for you and your friends, and all of the Talentonians who have a long way to go to getting back to a normal life.

So much destruction
Small mercy that, at least, it is without loss of life as you've remarked.

These are powerful pictures, and it's clear from your narrative that you have recorded them in a sensitive and respectful way. The fact that you are a member of the affected community adds weight to them, I think.

My sympathy and best wishes to you and your neighbours. Towns called called Talent and Phoenix will surely rise again.

Such a terrible tragedy, I have no words to express my feelings for the folk who have lost everything.
I am sure with help from the wider community that all will endure this terrible event, and be stronger as a consequence.
K

Miguel, thanks for posting all this. I was wondering how you were faring with all those fires, and am glad your home was not one affected. It provides a stark reminder that we in the southern hemisphere are going into our fire season which is getting longer and longer each year, as I believe yours is, also.

Well, what can I say to add to the previous comments? I too am appalled by the destructive force of the fires, and extremely relieved that you and your home have come through unharmed. How long it will take for Talent to recover, I couldn’t guess, but I’m sure the spirit of Oregonians will prevail.
D

Miguel,
Thank you for posting you photographs, obviously something extremely difficult to do. Having seen some of the media coverage, your photographs and commentary add such a different perspective. The photo of the animal feed really made me stop and think about what that says about humanity.
Stay safe.

Thanks, Kyle. I kept wondering and wondering....it's those little details that can drive a person nuts.
Hope you guys are safe and relatively smoke-free up there in Hood River.
G

Stay safe, and best of wishes for your community going forward.

Thanks for sharing these images and your words, Miguel. I cannot imagine staring at the remains of a place that people you know used to call home. I hope that your neighbors and community can rebuild.
D

My sympathy for you and your neighbours. I am in the UK but my sister is in Medford at the moment with my nephew's family, so I know about events there in south Oregon.

A terrible event and I am sorry for the loss your neighbourhood has experienced.

Such a difficult time, as you have so accurately captured and documented. Thank you for sharing Miguel - a good reminder to appreciate what we have.

I was in Portland when the fires broke out. I had family members evacuated and my nephew was called up as a reserve firefighter. Never seen anything like it growing up in Oregon!

Jonathan F/2 said:
I was in Portland when the fires broke out. I had family members evacuated and my nephew was called up as a reserve firefighter. Never seen anything like it growing up in Oregon!
Click to expand...

I hope your nephew and family members are all right, Jonathan. There have been some bad fires up in the north end of the state - all over, actually. I'm not a native Oregonian, but none of my many close friends who are, have ever seen or experienced anything like this, either. As Sue was mentioning, the fire season in Australia has been growing longer every year for the last few years, just as it has here on much of the West Coast. It doesn't take a rocket scientist to see the effects of climate change which have been setting record temperatures around the globe, and turning the ordinarily difficult 'fire seasons' into extended periods of real fear, where larger cities find themselves increasingly endangered and not merely the smaller forest-adjacent towns of yesteryear.

I also have good friends who have been involved in serious woodland management issues, for the national Forest Service and other organizations. They tell me that decades of profit-oriented timber clear-cutting have left many forests disturbingly un-diverse - in simpler terms, woodlands which once included old-growth trees, and were less likely to 'go up' in sudden conflagrations, are being replaced with quick reforesting in areas that have been subjected to heavy logging, resulting in more and more acreage with tinderbox-like tendencies. It's a depressing trend which doesn't seem to be letting up.

A close friend and fellow photographer survived the fire and saved his wonderful dog, but literally didn't have time to grab any of his cameras when he had to evacuate with minutes to spare. He's told me that he misses some of them - some cameras he'd used for a long time, and had emotional value as well as being great tools - but that in terms of what's important, saving his dog was the only thing that really mattered. He's a thousand per cent right, of course; his words and deeds keep reminding me that, in whatever ways we must, it's good to remember....what really matters.

An Old Town and a New Camera, Part 1