When the OM-D E-M5 was first introduced, pictures like the one below began appearing on the web. 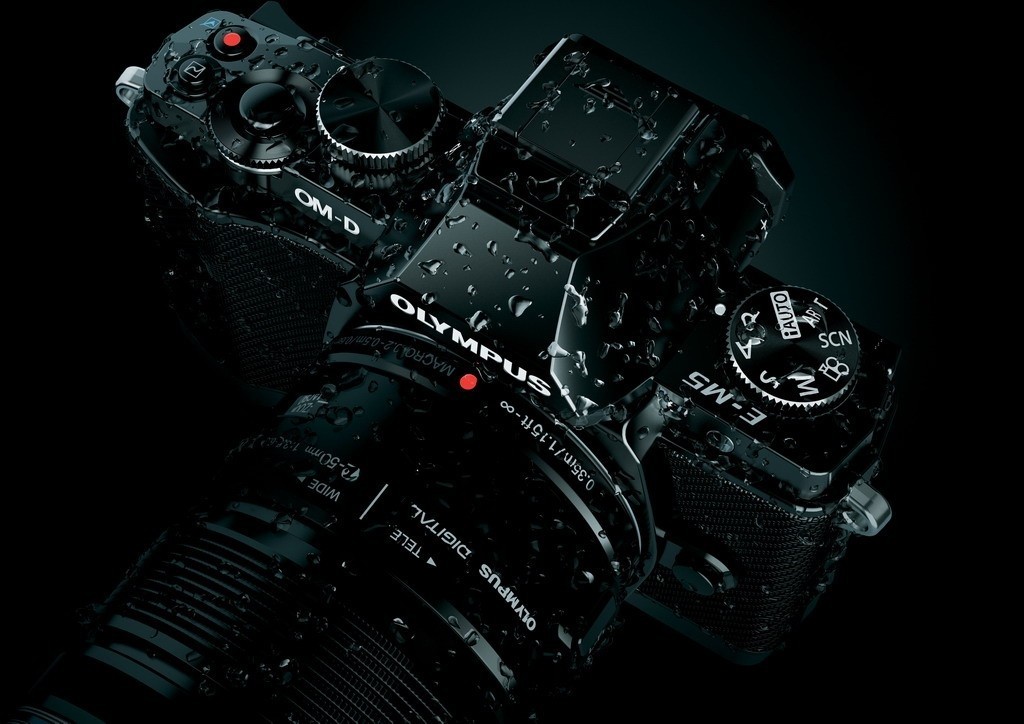 My first impression was Cool! a camera designed to deal with the elements. The promotional material said the camera, 12-50 lens and even the flash unit were designed to be splash and dust resistant. I was impressed. Then I read the price tag and was even more impressed. Maybe someday, I thought.

Fast forward to earlier this year when I had a problem with dust on the sensor of my FZ200. After paying the bill for dust removal, I realized that any lens or fixed lens camera where the lens has to trundle in and out to do its thing can act like a bellows, sucking dust and/or moisture into the works. Someplace on the web I twigged on the idea that the 12-50 lens for the E-M5 both zooms and focuses internally; the lens doesn’t change size and presumably is less likely to draw Bad Things into its interior.

When I discovered that an Olympus factory refurb could be had for a bit less than 40% of the original price, I pulled the trigger.

The OM-D E-M5 appears to be built like the proverbial brick comfort station. I see nothing that concerns me. Solid. Dependable. The kind of camera I’m not afraid to hang around my neck or sling over my shoulder when it’s time to stroll on a dark and stormy day. Yet, weirdly, its solid construction doesn’t seem overly heavy. And it’s small. The combination of not-too-heavy, relatively small, and rugged makes me want to take it with me anytime I am headed out the door.

An aside: I considered purchasing one of the point-and-shoot “rugged” cameras, but none of them has a viewfinder. Not one! I once politely asked a DPreview reviewer how he could possibly award a Silver to one of these cameras when he complained that the rear screen was hard to see in bright sunlight. Inability to compose the shot seems like as close to a fatal flaw as you could possibly get in a camera. He explained that the total points added up to . . . yadda, yadda . . . I wasn’t convinced.

The E-M5 feels good in the hand. The haptics alone made me bond with this camera almost immediately.

Olympus claimed “the world’s fastest autofocus” at the time the EM-5 was introduced. It seems roughly as quick as the autofocus on my Panasonic FZ200, but does a better job of focusing on the sky when I am taking sunrises, sunsets, or clouds.

I was a little worried that the relatively slow lens (f/3.5-6.3) might be a problem at the margins of the day, but the image stabilization system and decent IQ at higher ISOs has allowed me to do what I want to do so far without problems.

One of the things that I absolutely love about this camera is that the sensor seems to capture what I see with my mind’s eye when it comes to shooting the sky. This is a Big Deal for me. With my Panasonic cameras, I always have to diddle the images to get to the image that grabbed my attention to begin with. Not so with the E-M5. Press the shutter and you got it. It’s as if the sensor was tuned for sky photography.

The most difficult part of the E-M5 to become accustomed to is the software interface. “I don’t speak Oly,” one guy posted on DPreview. Nobody does, not even the Olympus people. It’s like this weird, lost language, scholars groping in the dark, trying to grok the meaning. You go from a Canon to a Panasonic, there are some adjustments, to be sure, but it’s not too hard to figure out what’s going on. When you’re trying to speak Oly, though, it’s harder.

Part of my problem, I think, is that the E-M5 interface is designed for pros “coming down” from pro-level DSLRs. The E-M5 seems designed for infinite customization to accommodate whatever work flow the pro had previously used. Me, I’m coming from the other direction, coming up from a point-and-shoot perspective. My work flow is: see the shot, take the shot.

(If anybody is listening, there are two series of interviews and articles that I would love to do. 1. How do camera designers make decisions in creating the user software interface. 2. How do lens designers do their thing. Both subjects fascinate me.)

My heartfelt thanks to all those brave souls who went before me into the land of Oly and posted their set-up guides to the E-M5. Once you go on one or two of their guided tours, Oly-speak begins to make sense (Oh, the syntax goes like: “Seeks these things, a Jedi does not” I get it.) and is far more approachable. Elsewhere I have posted links to some of these set-up guides and also a link to a really slick trick for extending battery (the original poster claimed it quadrupled battery life).

In the end, I really like the OM-D E-M5. I don’t see any reason right now why I won’t keep it.

I'm glad it is working for you. I really like mine as it does a lot of things well.

Your description resonates with my own experience. The OMD have their quirks but are very satisfying to use. The Oly menus take some practice/persistance/ritual sacrifice to use effectively.

It is the default in some modes on the mkII. Should be on all.

drd1135 said:
The Oly menus take some practice/persistance/ritual sacrifice to use effectively.
Click to expand...

Exactly. It's a good thing I ran into some of the "How to set up the Oly" posts done by others. After I ran through a couple of those, the control scheme began to make sense, but if you are coming from using a Canon or a Panny, yikes!

Sure did. The Super Control Panel allows me to change quickly almost everything that I might conceivably want to change. With this battery-saver trick -- Way to quadruple battery life on the Olympus OM-D EM-5 -- the rear screen is off most of the time . . . except when I press the INFO button and the Super Control Panel appears, or when I am playing back pictures. (The only disadvantage of this battery-saver scheme is that, because the 12-50 lens doesn't extend and the rear screen is black, it's easy to forget that the camera is actually on.)