Looks like our work with the Olympus gear keeps increasing!

For those who may not be aware, I had one of my images taken with Olympus gear used in an email advertisement and that same image may potentially be used in print ad campaigns. Given this, I had some talks with Olympus America (a great crew of people over there) and they gave me a great deal on the Olympus 40-150mm f/2.8 PRO lens.

Out of all the zooms for Olympus, this is the one that I had most interest in using. For the wider to medium focal lengths, the primes seem to fit the bill quite nicely.

I have coverage of the Arnold Classic coming up soon and this year decided with the acquisition of the Olympus gear that I would try to shoot it Olympus only.

Here are some sample images that will show the sizes of different 135 lenses versus the m43 40-150/2.8 PRO. Please forgive the crappy cellphone captures of the images. 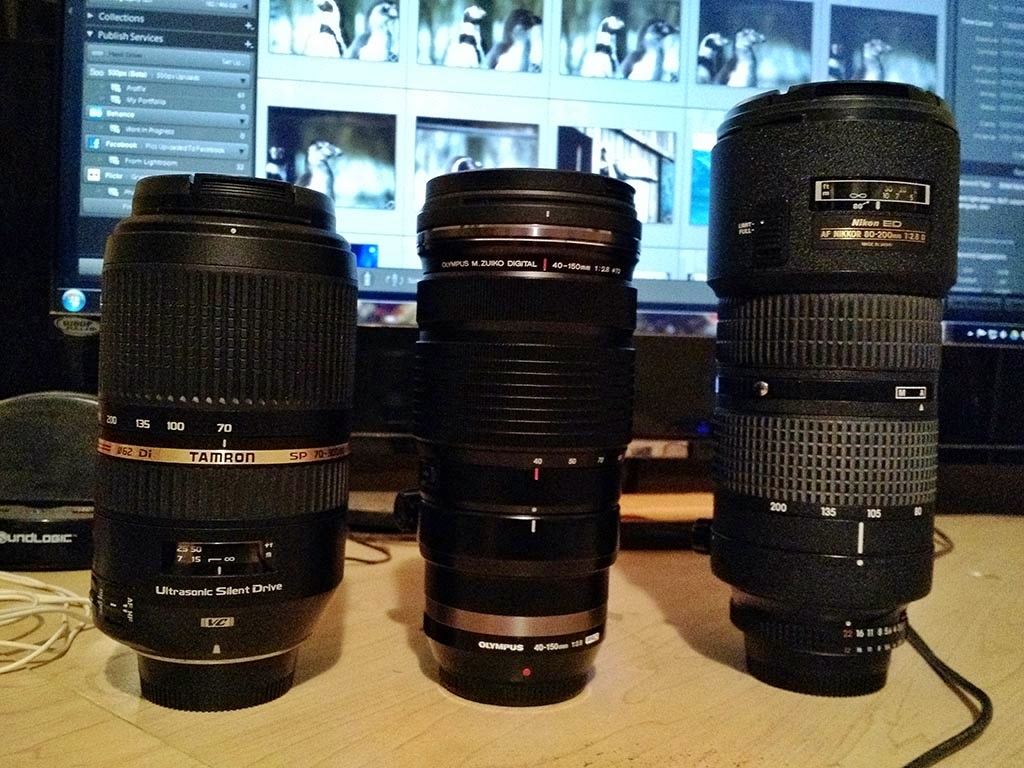 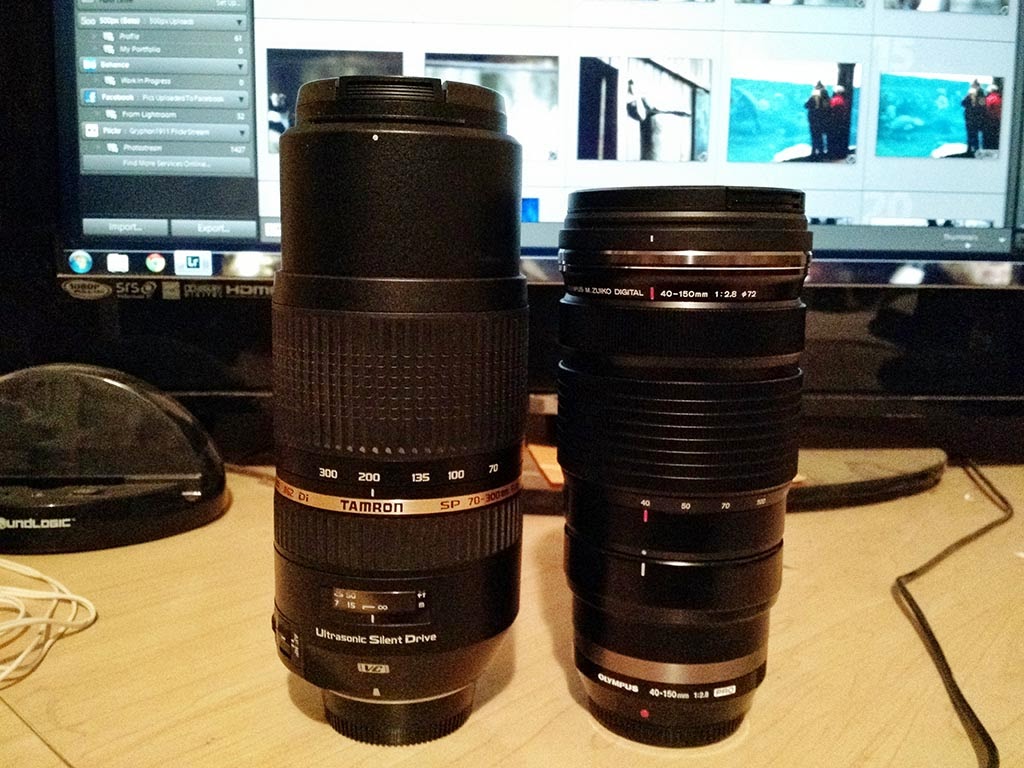 Tamron 70-300/4-5.6 extends when zoomed. Olympus does not. The Tamron would not stay extended sitting in this position. 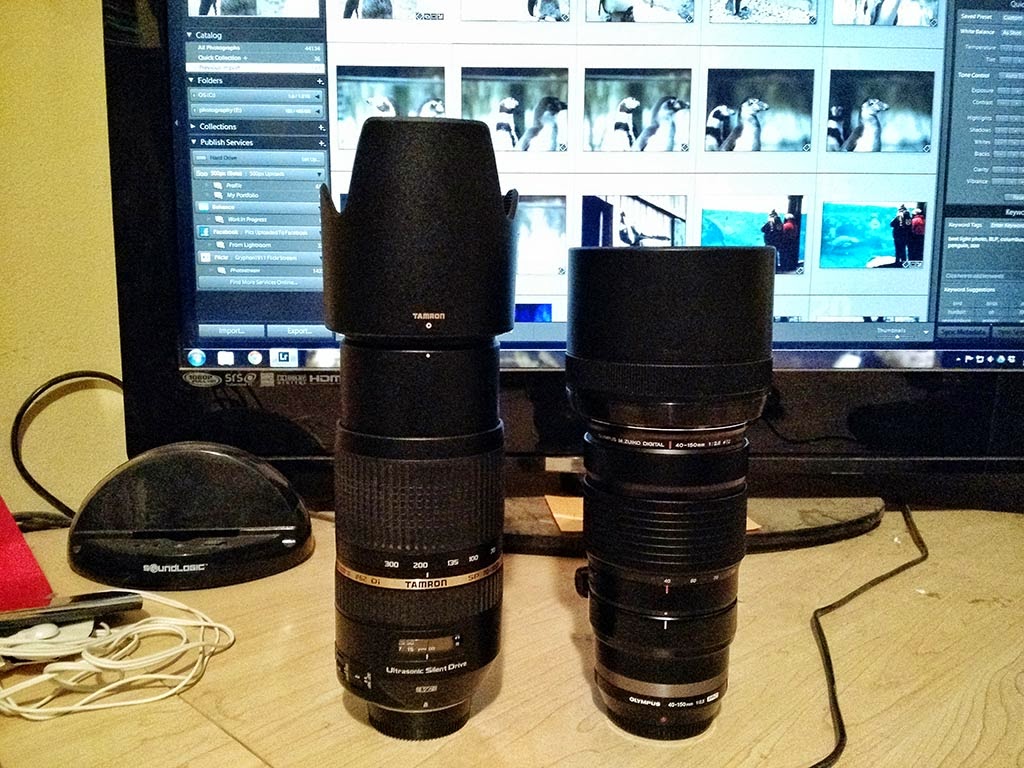 Before shooting any major events, I always like to test out new equipment. So first outing, took the lens to the Columbus Zoo and Aquarium.
Remember that I don't do charts and pixel peeping. I review a lens based on what it is capable of providing me as an end result. Keep that in mind when reading further.

Some notes:
I did not get the chance to shoot this lens with the newest firmware on the OM-D EM-1. It was still version 2.2. A lot of the habitats have glassed in viewing areas. While better than fences in some instances, they tend to be very dirty and can degrade final image quality.

Image Quality
I can't really find a lot of fault with the IQ at any aperture or any focal length. You have your normal IQ drop off at f/11 and above due to diffraction, but beyond that, I find it stellar.

The bokeh is also really nice and smooth.

I think you can see from the sample images above, that shot wide open and in the challenging conditions, this lens is fantastic in the IQ department. 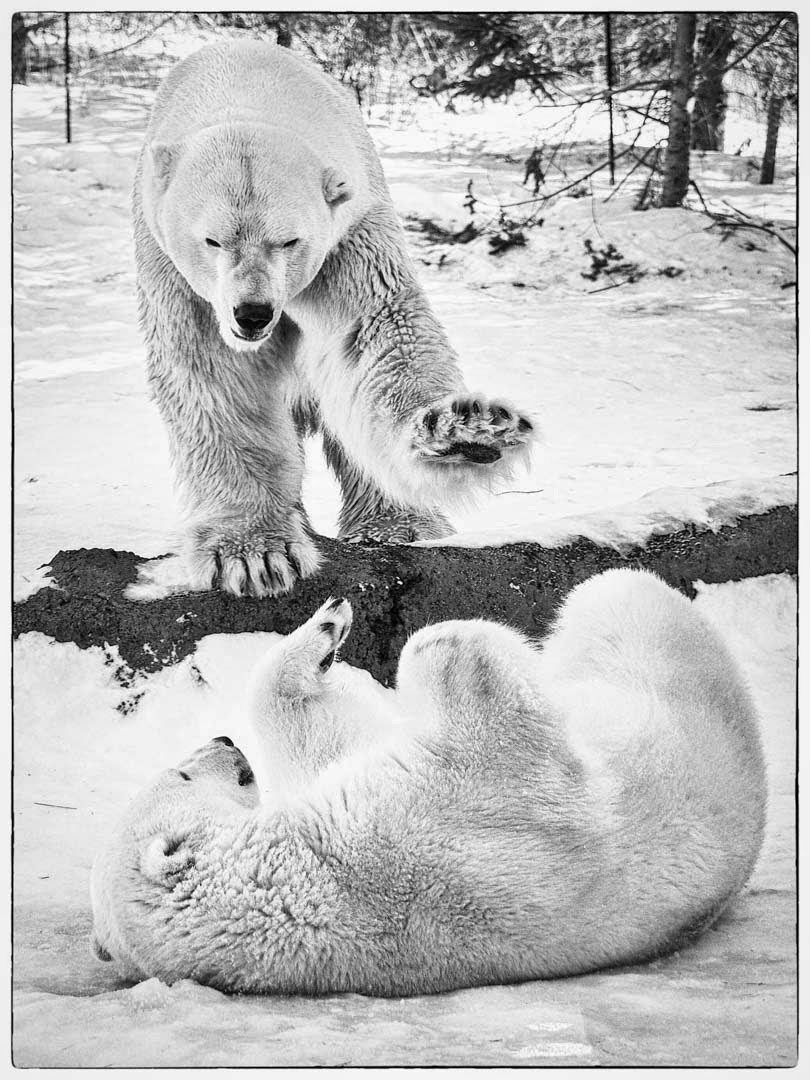 Handling
First impression was that it feels an awful lot like shooting with the Nikon 80-200/2.8, but without the bulk.

The zoom ring is smooth and dampened. It is a little stiffer than the 80-200, which I am able to change the focal length with one finger. The Olympus required a solid grip and turn, but you definitely will not move it accidentally.

The focus ring is smooth and moves from one point to the other very quickly. I like the AF/MF clutch as well for those times when you want to quickly switch over to MF. No menu diving and you get the added bonus of snap focusing. For those curious, the MF ring does have hard stops at either end. 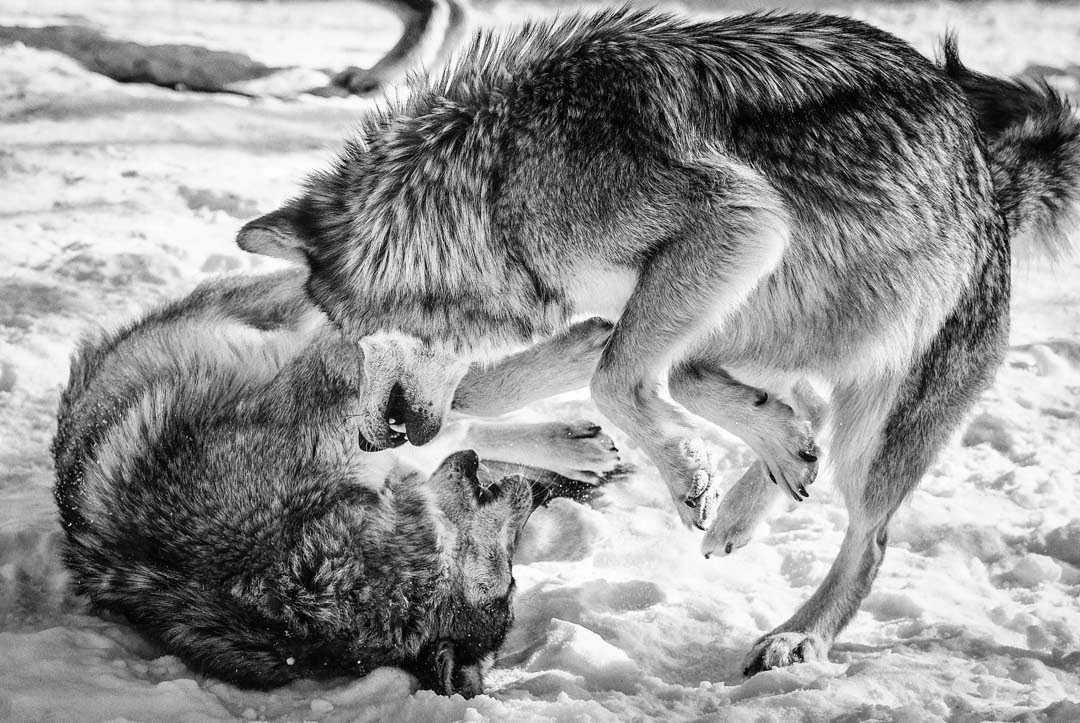 Tripod Ring
The tripod ring is convenient as it can be removed if you don't need it. What I like is the ability to rotate the ring all the way around the lens, so you can get it out of the way when you are shooting with it handheld. It also feels very stable, so should be solid when used on tripods. 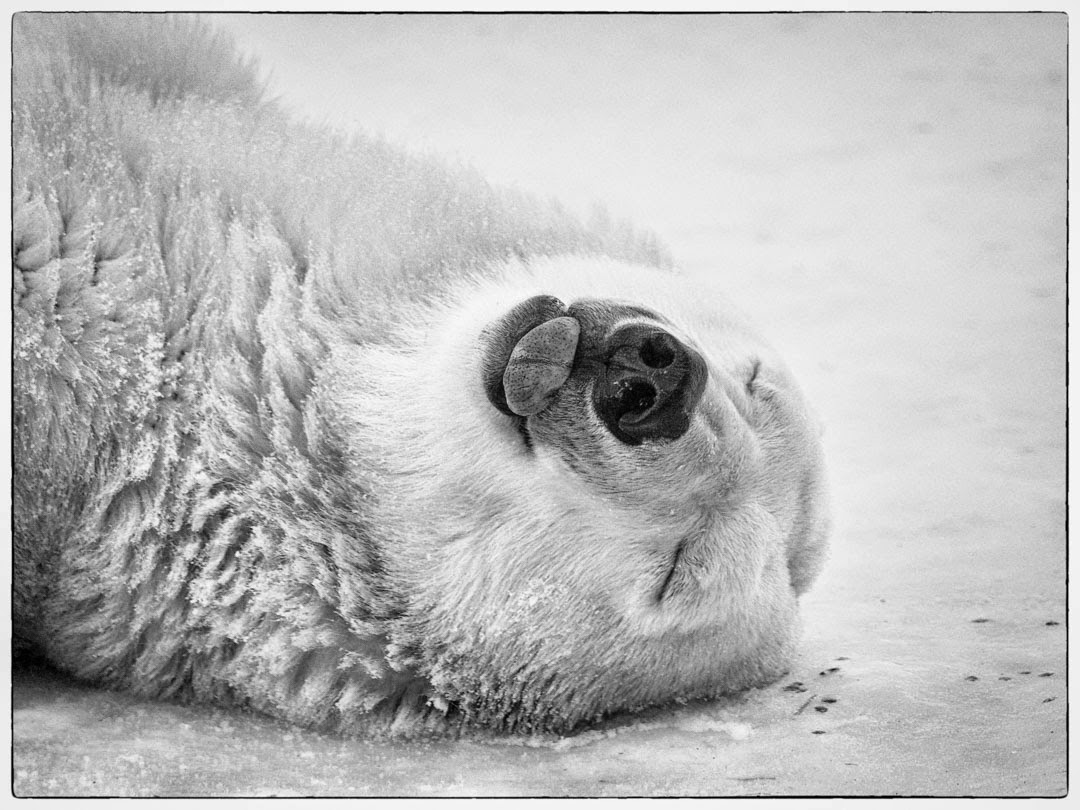 Weight
Compared to other m43 lenses, this one is on the heavy side. Compared to an APS-C or 135 equivalent f/2.8 lens, it is down right small and light. 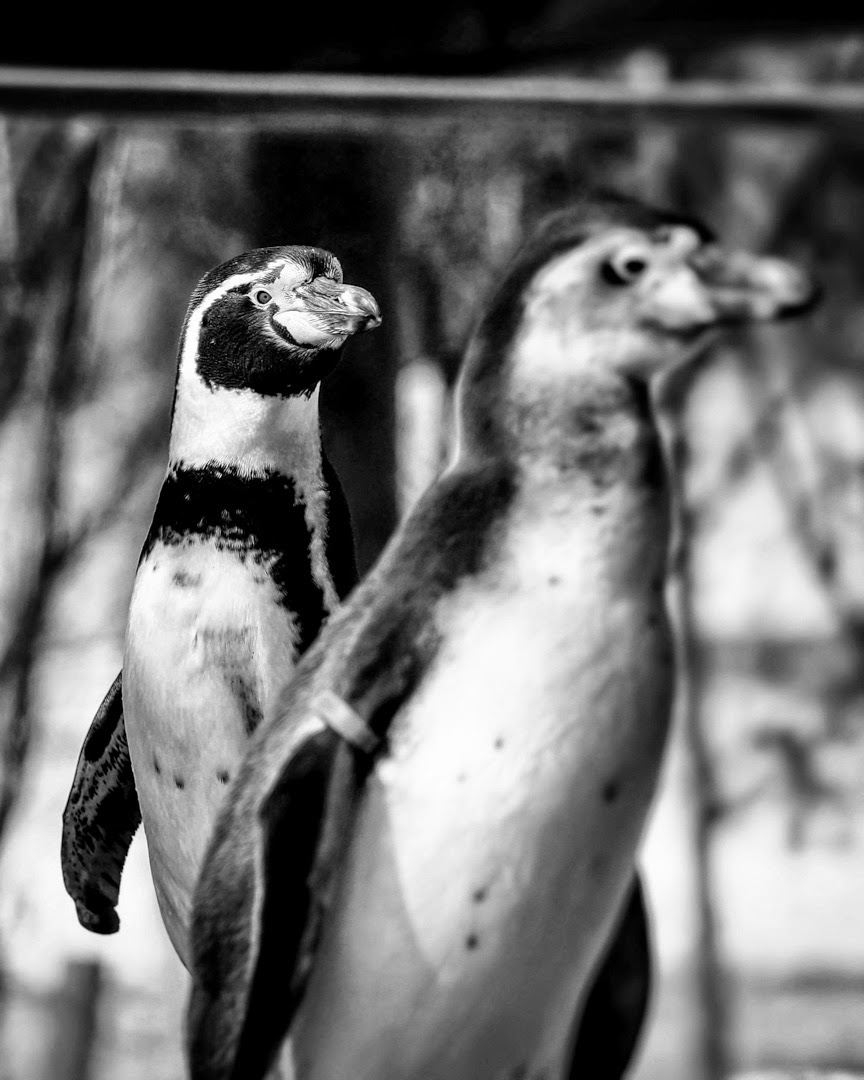 Auto Focus Speed
Single point AF is lightning fast in all but the poorest of light. Even in poor light, though it is slow, but tends to hit the mark. There is some hunting, but only when the lighting is so dark it is hard to see your target with the naked eye.
Continuous AF worked much better than expected, even given shooting through glass, which was our first shooting experience. With the EM1 firmware at 2.2, a DSLR is still going to out focus it. Once we get a chance to run it with the 3.0 firmware, we will let you know if there is a definite difference and what those differences are.

As it stands, the AF is so good and quick that you can hit most sport shots with just that. CF was used without the tracking option and it was adequate for use in non-mission critical uses(again, with the 2.2 firmware). There were some missed sequences, but given the shooting conditions, I'm not sure if the misses were the lens, my lack of experience using the m43 C-AF systems or the dirty glass I was shooting through. If there is any deficiency that we find we will report it. 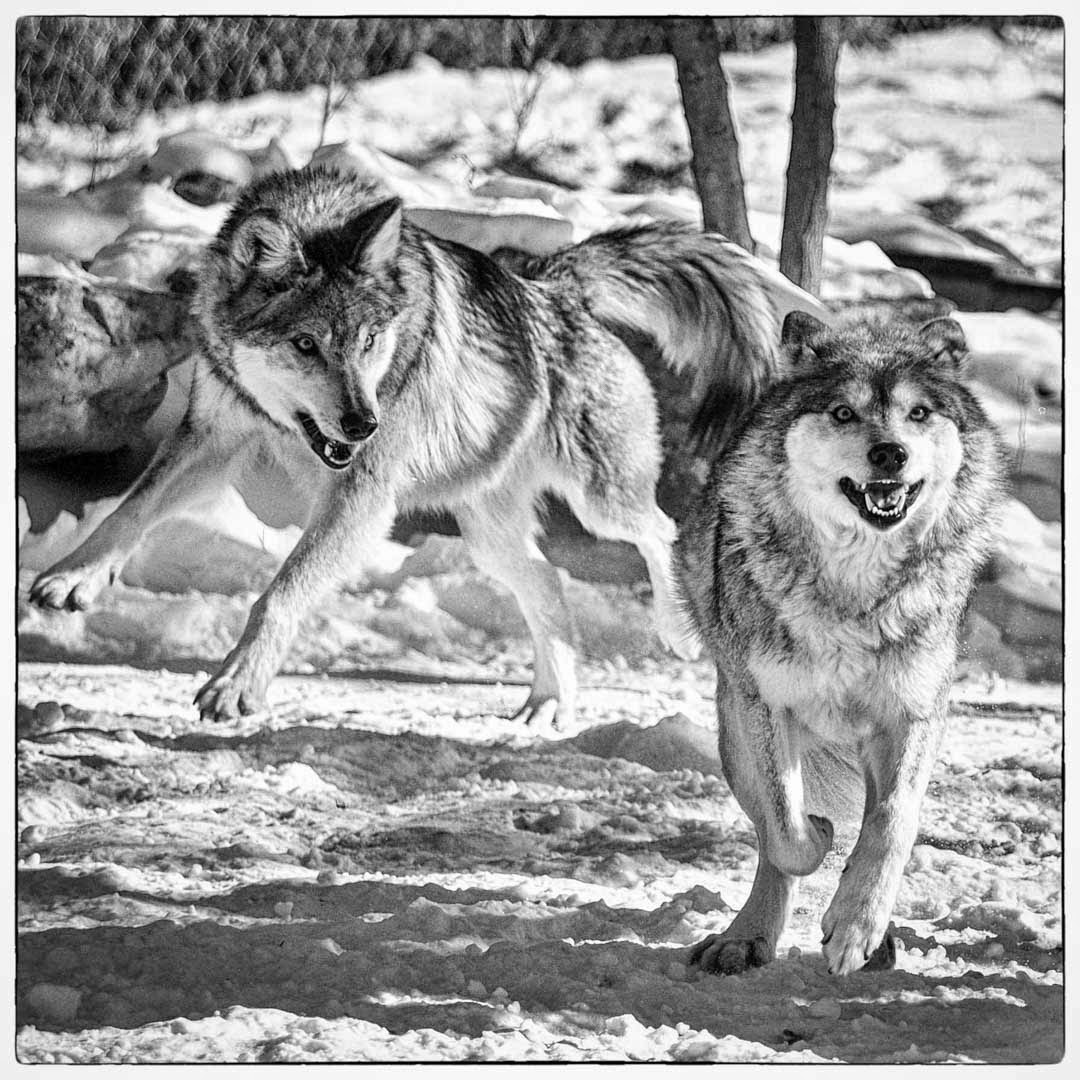 Lens Hood
I like the fact that the lens hood can be retracted with a twist of the ring. It stays locked in the deployed position until you use the ring. I wish it did the same when retracted. There were times just pulling the lens out of the bag that the hood would deploy. That is just me being nitpicky, though.

Conclusion
So far, just from this one day of shooting and seeing the results, I am sold on the capability of this lens. It is sharp, handles well, everything is in a great place and the AF performance is top notch. I'm not sure if Olympus could have made a better lens.

Thanks for the nice review and photos.

gryphon1911 said:
I have coverage of the Arnold Classic coming up soon
Click to expand...

Hmmm...A individual that I work with shoots for NPC News Online

2015 should be much bigger and I'll probably do a multi-post set. I'm thinking of adding some video clips into the mix as well as stills. You know, mix up the media some - try some things different.

2015 should be much bigger and I'll probably do a multi-post set. I'm thinking of adding some video clips into the mix as well as stills. You know, mix up the media some - try some things different.
Click to expand...

Tks for posting! (Excellent B&W)
One woman I know is an IFBB pro & another just started out in NPC Bikini.

Note To Self: Stay in da' gym and keep strong!

One last addendum.
Picked up an early model 80-200 for my Dƒ

80-200 are great optical lenses. They are just heavy and lack VR. Both of which can be overcome.

RT Panther said:
Saw Ferrigno in person last year - he looks fabulous for someone who's 60+

Note To Self: Stay in da' gym and keep strong!

I know pro body builders, and if Ferrigno is still looking good, that means he is still juicing - Just look at Arnold, who is obviously isn't anymore.

He's looking good for his age, but he is definitely not cracked like he used to be.

tdekany said:
I know pro body builders, and if Ferrigno is still looking good, that means he is still juicing - Just look at Arnold, who is obviously isn't anymore.
Click to expand...

We don't know that for sure....My father in law looks great in his 60s and he's never touched the stuff.

gryphon1911 said:
He's looking good for his age, but he is definitely not cracked like he used to be.
Click to expand...

Zane is looking good to for someone in his 70s!

I guess I am mistaken what you mean by still looking good.

tdekany said:
I guess I am mistaken what you mean by still looking good.
Click to expand...

He looks good - nothing more/nothing less.
I will not accuse him of something that I have no knowledge of...(innocent until proven guilty)

RT Panther said:
He looks good - nothing more/nothing less.
I will not accuse him of something that I have no knowledge of...(innocent until proven guilty)
Click to expand...

I am not accusing anyone either, but when I hear someone say that a former top body builder is still looking good, the first thought is juice. But maybe you just mean "healthy looking"?

You may not know this, but most pro athletes are Type O blood. And for Os, exercise is medicine - so as long as they are pumping regularly, it will show.

BTW, youtube Tom Plats. See what he used to look like and look at him in any recent video.

tdekany said:
I am not accusing anyone either, but when I hear someone say that a former top body builder is still looking good, the first thought is juice. But maybe you just mean "healthy looking"?
Click to expand...

I said nothing that would lead anyone to "juice".....And it's not my first thought....

Yes you did, but as I said, it depends on the circle you run in. I am sure I would have said the opposite about his appearance.

Just as an update for those curious about the EM1 firmware update.

This was only a quick test, but I shot around 100 shots, in bursts of cars, moving toward and away from me at around 15-30mph and going across the field of view at around 45mph. Shot at various focal lengths from all were 100% in focus.

Given - there was minimal obstruction of the subjects - nothing really going between the subject and lens. Shot in C-AF, 9fps bursts at f/2.8 in good lighting.
I'm not going to declare this the second coming or better than sliced bread just yet - I want to be able to shoot in a crowded frame first and see how that goes. So far very positive impression, though.

Will need to see if I like how the C-AF with Tracking functions.