Sony has released the latest version of the roadmap for E-mount lenses for NEX. 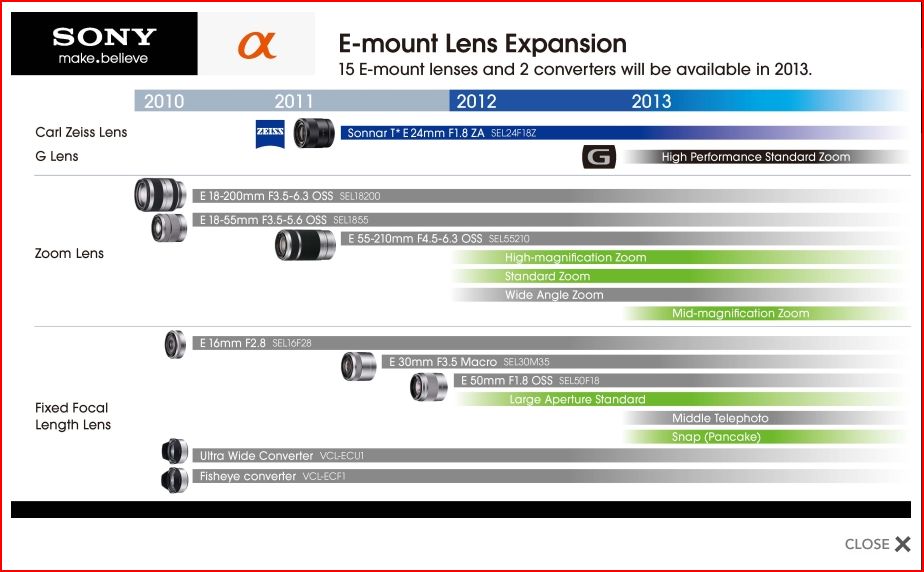 sony emount by ...olli..., on Flickr​
The new roadmap includes two of the three lenses previously announced for 2012 release - a G series standard zoom and a wide angle zoom. The telephoto prime has disappeared into early 2013 (difficult to tell exactly from the diagram); instead there is a 'large aperture standard' - presumably something like a 30 1.8.

Strangely there is mention also of a new 'standard zoom' - which would make three standard zooms. Other new lenses on the list (those in green) are a 'mid-magnification zoom' and a 'high-magnification zoom'. I assume 'magnification' here means the zoom multiple. So perhaps we will get something like an 18-125 and an 18-270. The final new lens is a 'snap pancake' - no idea what that is.

The real disappointment for me is that it looks like the G standard zoom isn't going to be appearing until the end of this year or possibly into next year. This was an area where Sony could have got a step ahead of the competition. Overall, though, together with the two recently announced Sigmas I like the look of this.

I wonder what the snap pancake could be. I guess that was their way of saying that they haven't picked a focal length yet.

I was wondering about the snap pancake too - maybe something like the Oly 12mm that can be more easily used for zone focus???

There's nothing on that roadmap that has me in any way second guessing my decision to scrap my Nex5 and go all-in with m43. As good as the Nex bodies are, that lens lineup, even assuming the best, just doesn't have much I'd want.

You know, if Sony came out with a small pancake zoom like Panny did, I might be more inclined to buy into the system. Right now the lenses are too big for my taste.

Nice to know Sony is really getting behind the E-Mount lenses.

Soon there should be something for everyone.

It's not a bad lineup, but it's just not for me. Not enough pancakes, and I really can't see myself using a telelens on a NEX body. It just feels wrong.

Moderator
Zeiss should have labeled the 8 element 7 group 24/1.8 as a Biotar or a Planar- it is anything but a Sonnar. The ZM Sonnar 50/1.5 is close to the original design, the front triplet of the original design is replaced by two elements with an "air gap" in between. Functionally equivalent, the ZM retains the classic Sonnar signature.

Here's hoping the snap pancake is a wide-angle that has click-stops for focusing at 1m, 1.5m, 2m etc. I don't see anything else of interest from Sony but am looking forward to the 2 Sigma lenses..

Supporter
I dunno. Continue to be unimpressed. Guess I'll stick with my EPM1 for now. Pass on the NEX7, OMD and XPro1.

I was at a Sony store yesterday and asked about the 50mm release date. They don't know it. So I am wondering when Sony will catch up with last years products...


Armanius said:
Hmmm ... maybe Sony should focus on increasing their supply of NEX7 and 50/1.8.

This might be a silly question but do they make an adapter to use the E mount lenses on the a mount slr's? would they autofocus?

Having just got my a55 it's something of interest to me.

thekeddi said:
This might be a silly question but do they make an adapter to use the E mount lenses on the a mount slr's? would they autofocus?

Having just got my a55 it's something of interest to me.
Click to expand...

Not that I'm aware of. But the A mount lens line up is pretty decent.
J

Anyone can explain the color code they're using on that roadmap?

Julien, I think that the grey ones are those that were already announced in previous roadmaps and the green are the ones that are new on this roadmap.
J