retow said:
Spend as little time as necessary for the touristy stuff.
But take time to:
1. Walk the high line early in the morning and around sunset.
2. Rent a bicycle as Manhattan has become bike friendly and this a great way to get around and see a lot.

10. B&H and Adorama are worth a visit, though visits to these gear and gadget candy stores can get pretty costly.
11. And of course, a boat ride and visits to the Central Park (great on a bicycle) are a must do when in Manhattan.
Click to expand...

Agree with almost all of these recommendations and will add.

1. I stayed near the High Line when I spent a month there so I sort of took it for granted as just part of Chelsea and the Meatpacking area, but it really is wonderful. And stop at the Chelsea Market when you're down around 16th or 17th.

2. You can actually join the "City Bike" program on a short term basis and just pick bikes up in one part of town and drop them off in any other part of town without having to worry about looking after or returning a rental to the same place. It's an enormously successful program that's been in place for less than a year. Great for locals and tourists alike. During peak commute times you might actually have to stand in line to wait for a bike to come in - that's how successful it's been - but most times of most days you won't have any trouble finding a bike at a zillion spots all over the city.

10. B&H is a must. Even if you're not all that into cameras, it's just such an amazing organizational feat and runs so incredibly efficiently that it's worth just buying some little doo-dad and following it through the process from display to checkout. And if you spend some time with one of the sales folks looking at camera models and buy one of those, so much the better. I think I'd stop into B&H on every visit even if I didn't care about photography. You could skip Adorama - they've got a great web presence, but in person its just another of several good NYC camera shops with good inventory. Nothing terribly special about the experience. If you need something and they have it, go for it, but as a tourist experience, there's nothing all that special about it - 17th St Photo is just a few blocks away and also very nice, Photo Village is a few more blocks up, and there used to be a Calumet nearby too (not sure about it's current status given the bankruptcy). All are good shops and it's nice to have them in such a compressed area. But B&H is worth an hour or two just based on what an amazing operation they run.

11. Central Park can't be stressed enough. It's the most amazing piece of highly URBAN open space I've ever seen anywhere. On a nice day in the Spring or Autumn, Central Park is a place you can easily spend the whole day. You'll feel like you're in the city because the skyline is obvious from everywhere and there will always be people around. But it's an incredible respite from the urban intensity of the rest of the city.

One other thing I'd add is even if you're middle aged and tend to go to bed pretty early most nights, stay up REALLY late at least once or twice just to experience a city that never really shuts down. I was last there in October with some old friends and there's just something about sitting outdoors in an Eastern European restaurant of some sort (actually, I think it may have been Ukrainian) in the East Village and slurping matzoh ball soup at 2 in the morning. With TONS of people walking by the whole time. It's simply the most alive city I've ever been too. Sometimes a bit overwhelmingly, but if you pick your spots, not really.

I'm going back for a few days in May and I'm already looking forward to it with a slight ache...

retow said:
Spend as little time as necessary for the touristy stuff.
But take time to:
1. Walk the high line early in the morning and around sunset.
2. Rent a bicycle as Manhattan has become bike friendly and this a great way to get around and see a lot.
3. Walk or bike across the brooklyn bridge an back.
Click to expand...

These were going to be my suggestions as well. The High Line is a must, for my 2 cents. It's free, it's gorgeous, the views are fantastic, it's generally not THAT crowded...

Have fun and take pictures.

If you're hankering for a day of street shooting, you could do a LOT worse than basically walking most of Broadway from about Canal Street up to about Lincoln Center. Try to get a nice day, take a couple of small detours and catch Washington Square Park down at around 4th Street and Bryant Park up at about 41st, but otherwise just stay around Broadway all the way up. You'll get a taste of Soho, Noho, the Village, mid-town (technically you'll hit Chelsea too, but not the part of Chelsea that FEELS like Chelsea), Times Square and the Theater District, Columbus Square, etc. You'll go through both Union Square (amazing on a weekend when all of the vendors are out), Madison Square and the Flatiron, you'll touch the corner of Central Park. It's not a short walk but it's not that long either and you'll probably take some breaks along the way. But the environment changes a LOT as you pass through the different parts of the city, and Broadway always seems to have a bunch of people out almost everywhere.

You could also easily spend a day street shooting down in the area around Chinatown, the Bowery, Little Italy, Soho, Noho, and the Village. You can do lots of street shooting almost ANYWHERE in NYC for that matter. But just walking up Broadway is an easy way to see a lot of the City without worrying about going too far astray...

Well, hopefully the weather will have warmed up a bit by the time we get there … arriving at the end of April so we are there for my birthday.

Now … about this middle age thing … what is that these days? You got me worried! Now, don't go spoiling my birthday by telling me I'm getting old!

I'm now armed with a couple of New York travel guide books and gonna plan some of my trip this weekend. This is so unlike me. I'm usually on the plane before I open a travel book and then let the path in front of me do the leading (you've seen my pictures, my path normally has my husband walking ahead of me, he's good, he reads the books!)

Thanks for all your comments. The suggestions you have given are food for thought. Please keep them coming and please, please, please, any photos you have of New York, even if they were taken a while ago, I'd love to see them. Just post a link to your flickr, ipernity or whatever account and I will have a look.

By the end of April, things will be in good shape - unless there's another arctic vortex. Seriously, by then the leaves will have unfurled, daffodils, etc., will be blooming.

(My birthday is at the end of April, too, so I don't forget the weather trends then - and used to live a 40 min. train ride away from Manhattan.)
R

Lets see if these work 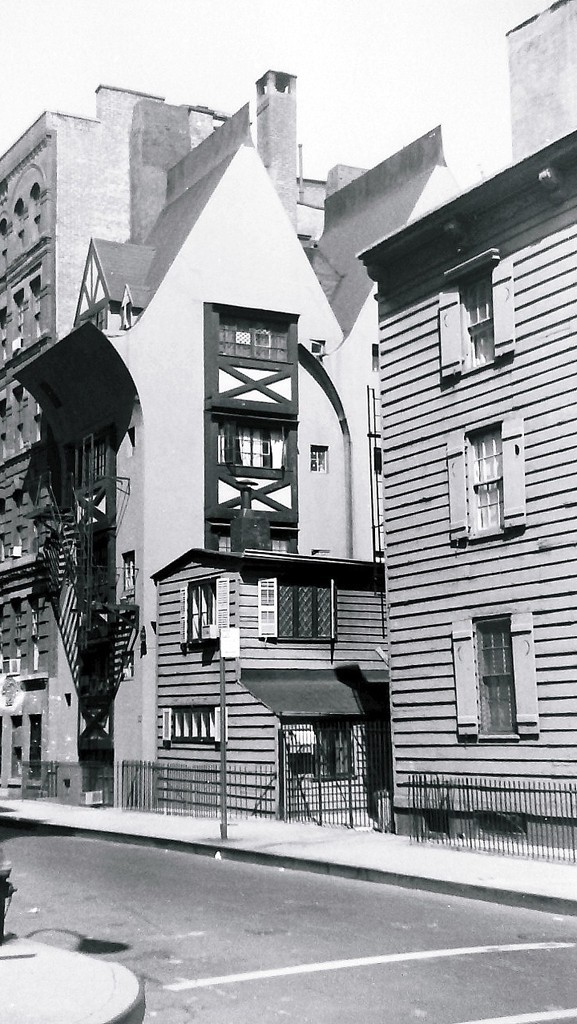 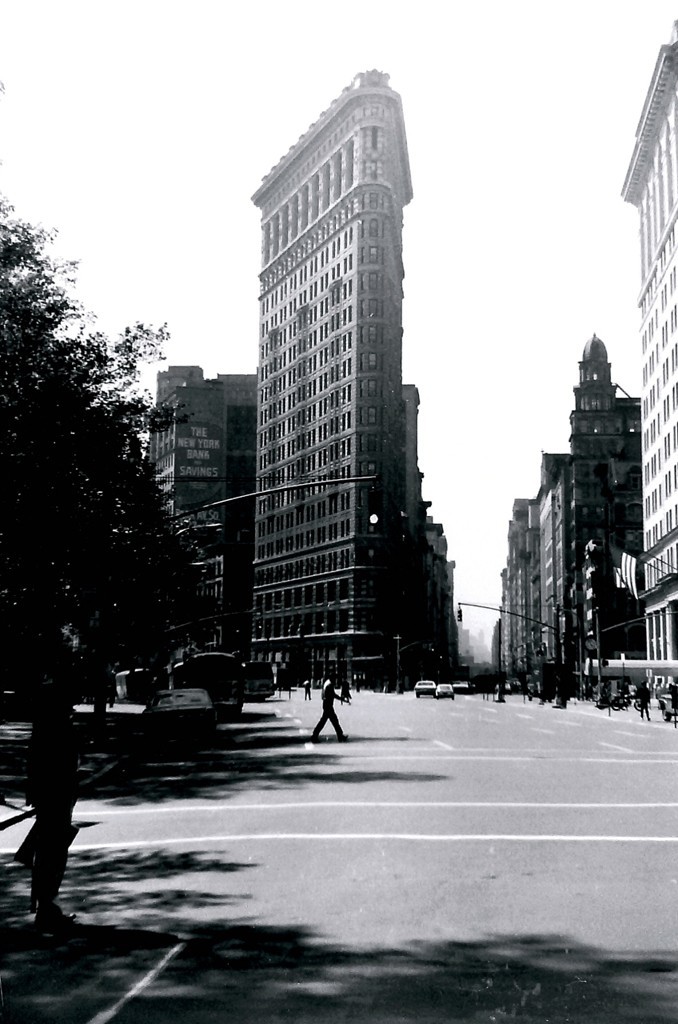 at first, i thought.. i really want that filter. then, i realized they actually were vintage pics. lol

(Sent from another Galaxy via Tapatalk.)

Here are a few I took last a summer. Too many things to do in NYC! Guggenheim is a must! As is Central Park. Wear the most comfortable walking shoes you own. If you know anyone who lives there, get them to show you their favorite places. Some of our best experiences where eating at hole in the wall eateries that we would never have found without a local (my niece lives in Brooklyn and goes to Juilliard). If you don't get a chance to take the Stanton Island Ferry, then take a sunset water taxi tour. Both go near the statue of Liberty.

The first three photos were taken with a Olympus OMD E5. The fourth was taken with a Sony RX100. I also had the Fuji X100 along. They all fit nicely in a fairly small bag.
We rented a car to drive up to Niagara Falls which was awesome, but driving in the city (only did it one day) was not.
We did not have time for Broadway, but saw a local jazz band play and that really fantastic. I am sure you will have a great time, and probably leave the city thinking you only scratched the surface! 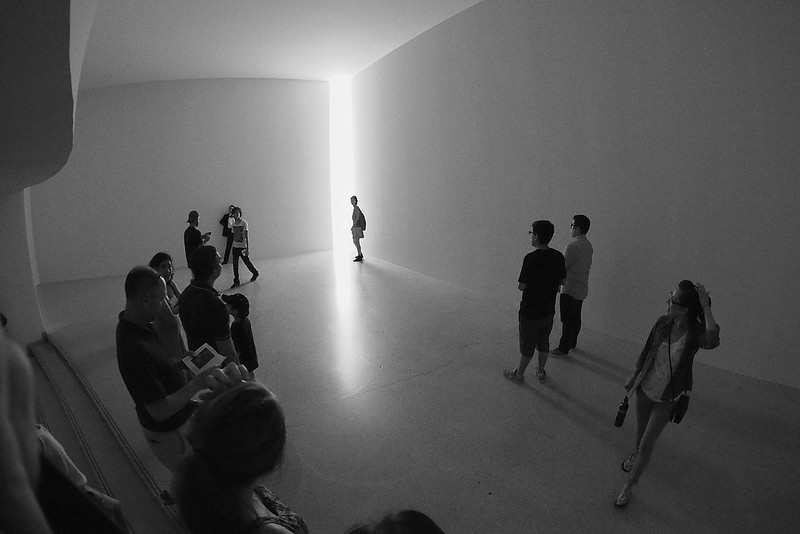 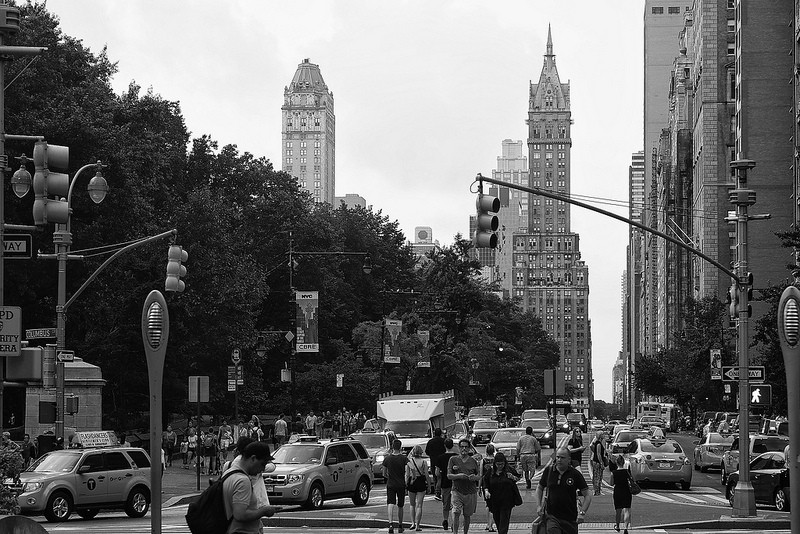 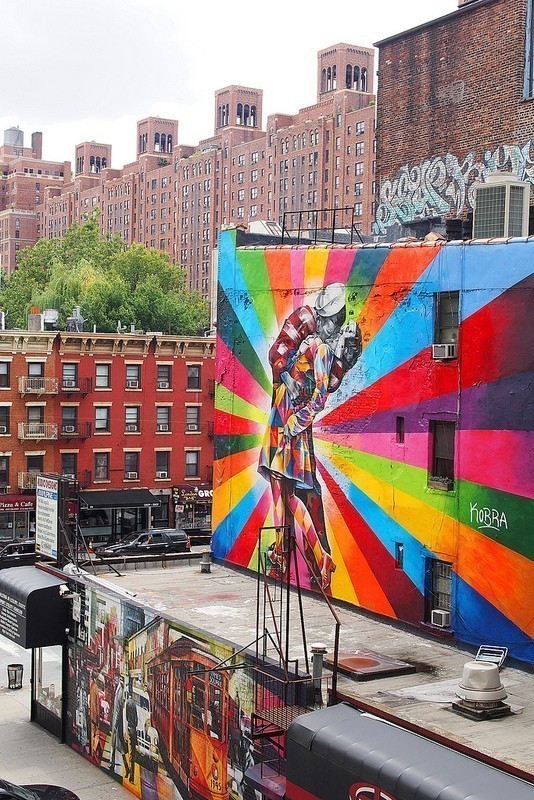 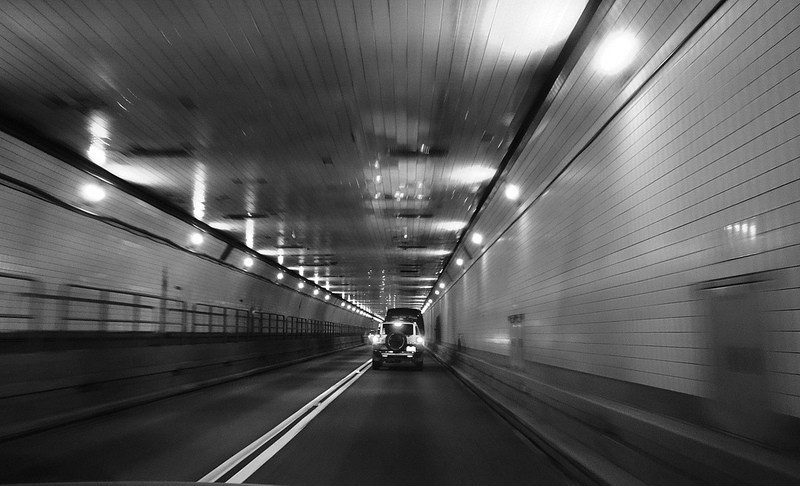 If a New York City like the one ReD shot still existed (with hardly any people), I might be interested in going. I'll be looking forward to your shots Karen.
R

A few from NYC.
R

And a few more of all sort of genres and cameras.

I think I've posted many of these at various times, but I've got a fairly enormous set of NYC shots on Flickr, which you can see here. Many street shots but also a lot of scenic shots of the city...

Here's a sample from the set: 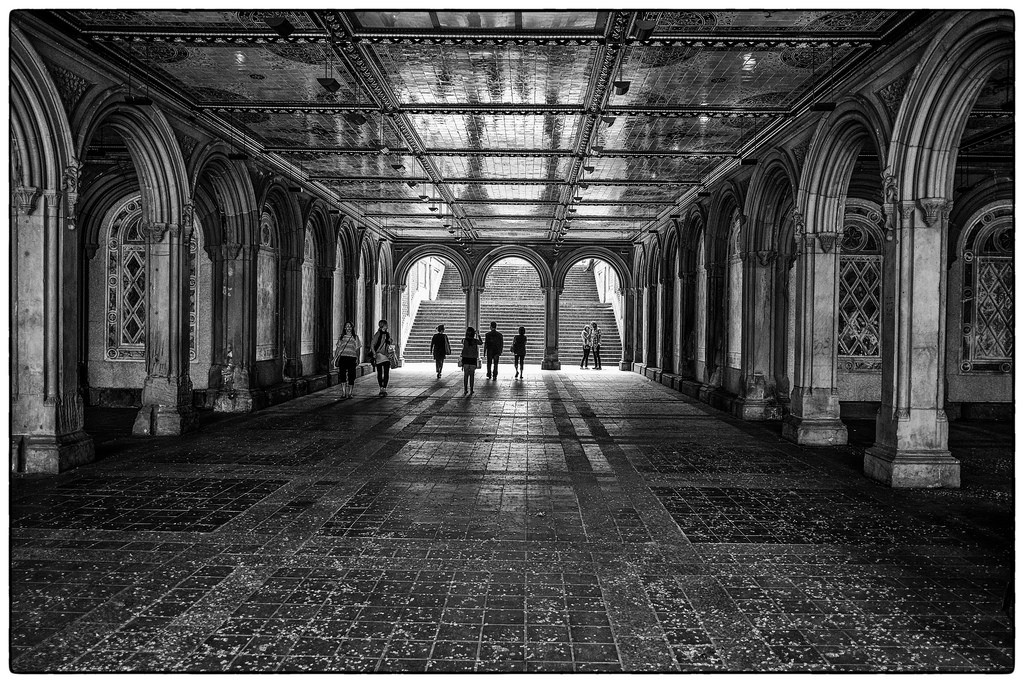 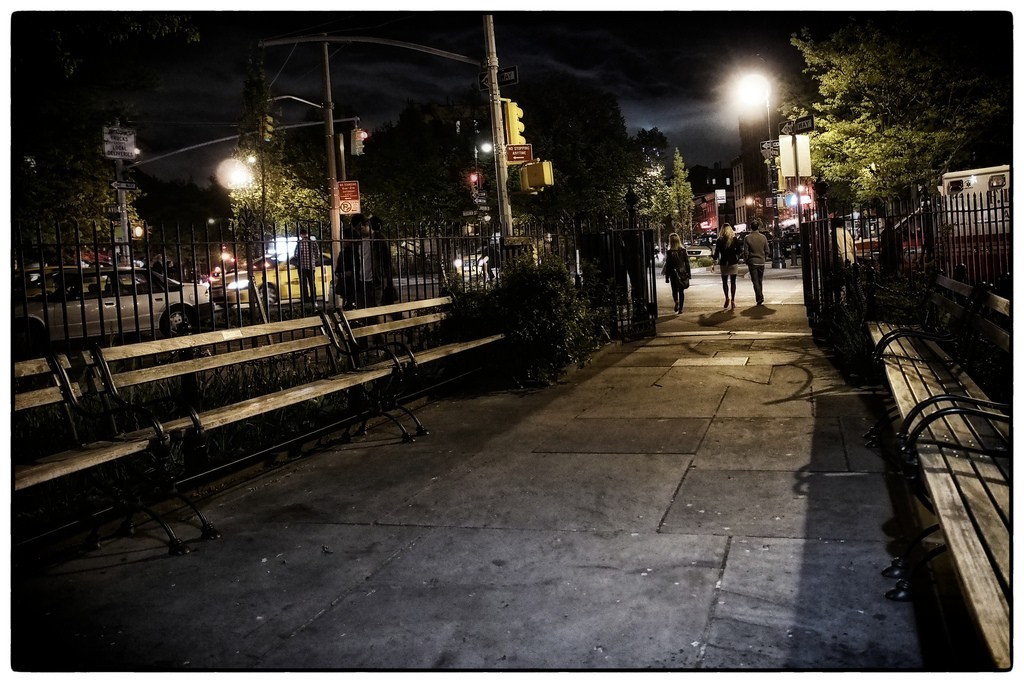 The cable car crossing East River to Roosevelt Island and back. Cheap.....cheerful and some great views. Get it round about 53rd? 52nd? and 2nd/3rd? if I recall.

Here are my efforts from September last year. Couldn't post all 250, so here is a link instead. Have a great time in that wonderful rumbuctious metropolis.

By the way, if interested....I can get you a discount at the HoJo on border of China Town and Soho. They let me on the roof to take this shot! Modern clean hotel, buffet breakfast included 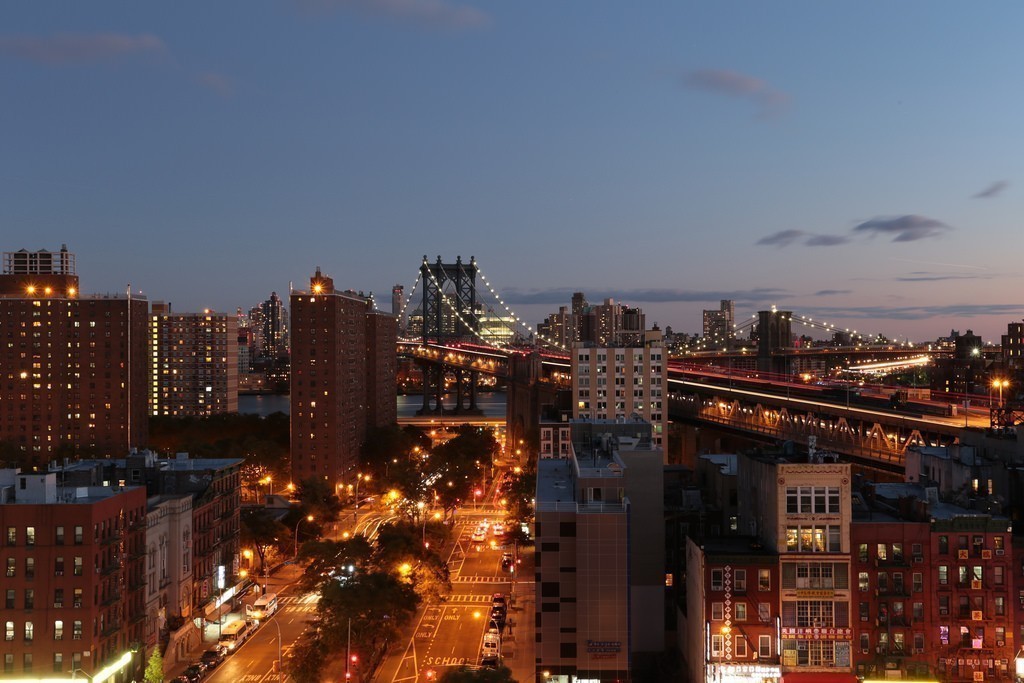 Hope that the weather is kind to you

Have a good trip

The high rent restaurants I'd agree completely. But if you're into ethnic food you can eat REALLY well for very little money in New York. Thai, Indian, Mexican, Middle Eastern, Italian (you can spend a lot or a little on Italian, but there are plenty of good and inexpensive Italian places) - I was amazed by how little it actually could cost to live in New York if someone magically gave you a place to stay and your tastes aren't too high-brow. For a fancy continental restaurant and a night at the theater, though, THAT's gonna cost ya! But actually affording a PLACE in New York is prohibitively expensive. Everything else can be done pretty reasonably. And if you get a subway pass and an annual pass to city bike, your transportation costs are zilch compared to most places...

EllaPearson said:
New York was a city where you could be frozen to death in the midst of a busy street and nobody would notice.
Click to expand...

And then, of course, there's Vegas...