Just to say that if anyones keen to get their hands on a NEX-7, I pre-ordered a body only on 22nd. December, having cancelled an order for the kit which I read was going to be delayed, and it arrived today. I was also charged £848 for it which is somewhat cheaper than everybody else. This was from the Sony UK online store. 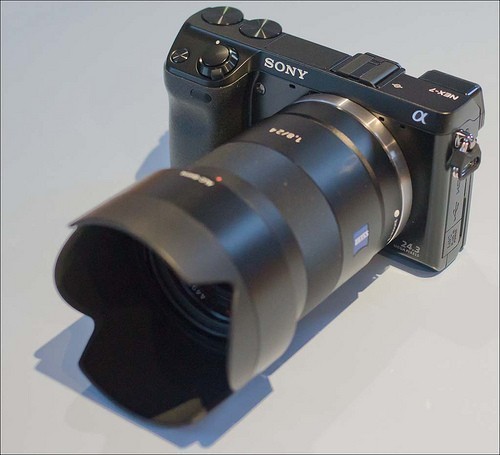 Congrats on the new toy David! Looking forward to your thoughts on it. Did you already do a write up on the Zeiss 24mm?

David, how does the NEX-7 size with the Zeiss 24 compare with the GX1 and Leica DG 25/1.4? The Zeiss looks big in your pictures, but there are a couple factors (thin body, perspective, hood) which make it harder for me to get a good sense of it.

I saw 2 NEX 7 box's in the managers office today so we have them at Park Cameras too. Looking forward to having a play but I won't be buying one.
S

Amin Sabet said:
David, how does the NEX-7 size with the Zeiss 24 compare with the GX1 and Leica DG 25/1.4? The Zeiss looks big in your pictures, but there are a couple factors (thin body, perspective, hood) which make it harder for me to get a good sense of it.
Click to expand...

Like you I was looking at all sorts of pictures, trying to get an idea of what it might be like. In the end its slightly lighter and smaller than I imagined. Its only marginally bigger than a NEX-5n.

The Zeiss is quite big with the hood on, but not so much without it. Its a beautifully made, yet light lens. A GX1 / 25mm combination is slightly bigger in terms of the camera and slightly shorter with the lens. But again there's not a lot in it. The NEX-7 body is pretty much the same as an E-P3 without the EVF, though its slightly shallower because of the NEX-7 grip, which is very good to hold.

The great thing is these wheels which control functions. I set them up very quickly for aperture and +/- control and they fall just naturally under my thumb. Nicely weighted too. Shutter is nice and positive, with this electronic first curtain, and there's no delay.

Like all the other reviews, I very much go along with the fact that its well thought out and seems to have been designed with ease of use and quick handling in mind. Very impressive. I must admit its one of the best handling cameras I've ever picked up. When you think whats "under the hood" its quite amazing.


Armanius said:
Did you already do a write up on the Zeiss 24mm?
Click to expand...

I've added a shot of it compared to a NEX-5n with a Voigtlander 35mm f/1.2 attached. The Voigtlander is about twice the weight.

That's great to read, David, about the ease of use...re setting it up and how it feels, etc. When I first started reading about this camera it caught my attention. I'm not currently in the market for a new camera, however this is one that surely is worth a lot of looks by anyone who is.

IF Amazon had the NEX7 and Zeiss 24 in stock, I'd order them in a heartbeat. Thankfully, they are not in stock. Yet.

Armanius said:
Now that you have the NEX7, will the A77 go soon?
Click to expand...

Imagine how this NEX7 body with the Samsung 30mm f2.0 pancake would look like. This would give me severe GAS attacks. If that Samsung NX200 had an integrated VF....

retow said:
Imagine how this NEX7 body with the Samsung 30mm f2.0 pancake would look like. This would give me severe GAS attacks. If that Samsung NX200 had an integrated VF....


If Sony came out with a series of decent smaller lenses for the Nex series, I'd be sorely tempted by the Nex 7, or even more if they'd come out with a Nex 6 that combined the body of the 7 and the sensor of the 5n - I just don't have any personal need or want for 24mp files, but I do like that body. But given the current lenses and the roadmap, I'm out of the Nex world. As nice as I'd bet that Zeiss 24 is, I simply wouldn't carry it or any other setup of that size when I could buy an entire X100 for within a small margin of the cost of the lens alone, let alone with a body. And there just aren't any other lenses in the Nex lineup that look at all compelling to me, for how and what I like to shoot. So I'm just gonna have to admire the nice Nex bodies, sensors, and EVFs from afar. And hope that somebody makes a body like the Nex 7 in the m43 world.

retow said:
If that Samsung NX200 had an integrated VF....

I would certainly agree with that, and the NX20 may well have that.

However I'm not a fan of very small cameras and pancake lenses, I find them very difficult to hold in a satisfactory stable way, and the "flimsiness" can be a cause of problems.

My wife has been trying out a GF3, and when I use it I'm constantly "battling" the camera, all the controls are too small and its just so difficult for me to use and feel comfortable with. Its so small I'm not sure a built in EVF or add-on would help much.

Of all the small mirrorless / E.V.I.L / CSC's I've used the NEX-7 is certainly the nicest I've used. The grip, though not substantially different from other NEX cameras, is very comfortable, and the positioning of the control wheels is a masterstroke, enabling very quick control over basic settings. The EVF is somewhat unusual being so far to the right of the camera, and its taking a bit of getting used to, but it does work well, plus no nose on the screen which is useful.

Though I like the rangefinder look aesthetically, it can be difficult to work with, and I always found the Leica M9 I had, could be a problem, until I bolted a grip onto it.

I know its easy for me to say, and I know they are still in short supply, but if anyone is interested in the camera, try getting your hands on one to see what it feels like. I picked mine out of the box, stuck my Zeiss lens on it and instantly knew I'd got something that will work for me. I would also mention that the NEX-7 / Zeiss 24mm combination looks and feels fantastic. Both are incredibly well-made, feel solid as a rock and yet are both very light.

Sometimes when I pick up one of these small cameras and use them, I'm unsure as to what to do with it, how to carry it and even how to hold it in a way thats comfortable. The NEX-7 is the complete opposite, it seems to fit in the hand like an old friend, and instead of thinking about the camera, I start thinking about the pictures I'm going to take with it.

I wrote this morning on my blog that not only have I been waiting for a camera like this since August when I put my first order in, I've probably been waiting for it my whole photographic life. All that performance and resolution in such a small light package, still astounds me. Many of us that have hauled SLR's, DSLR's and Medium-Format cameras around, will see it as the Holy Grail of travel / landscape / location cameras. I've certainly tried a LOT of other cameras, but never seem to have found that combination of terrific image quality and lack of bulk and weight. Though cameras like m4/3, X100, previous NEX cameras and yes even the M9, had their virtues individually, I've never found one that put it all together. Which probably goes to explain why I've had so many of the things! I was hoping that the NEX-7 would be "the one" and I could stop this constant chopping and changing. I'm happy to say its certainly the best option I've used so far.

Personally I couldn't care less if it has a pancake type lens range or not and to be honest I love the NEX lenses. They are superbly engineered and a joy to use. The NEX-7 seems to me that its designed by photographers for photographers. Its relatively gadget free, and laid out to be accessible, fast and accurate.

If you'd told me this time last year that I would have this available, I would have suggested you take more water with it, but I do, and while no camera is ever 100% right this one is pretty close for me.

Its actually somewhat of a "niche" camera, since its not really an all rounder. The high ISO performance is OK, but would be somewhat disappointing to those who do a lot of indoor and low light work. To be honest its not much better than current m4/3 cameras. But since I rarely move away from ISO 100, and work virtually exclusively in good light, its just what I've been looking for. Plus in my line of work 24MP is a good thing. A really good thing!