This week I got a rare opportunity... hope you all will not mind me sharing a little of this experience.

The bell in the steeple of the North Church on the New Haven Green needed some repair... It's a beautiful old church built in Federal style by David Hoadley in 1814. In any event, the funeral peal clapper had pulled loose and it needed to be re-affixed. A friend of mine is one of the congregation and got permission to work with one of the staff to fix it. i got to tag along and take photos. The bell itself is interesting... an 1856 George H. Holbrook made at Medway Massachusetts. He was regarded as the foremost bell maker in America in his time. George's father was one Major George Holbrook - it is an interesting fact that Major Holbrook in early life had been an apprentice in the bell foundry and clock-making business to Paul Revere, of Revolutionary fame. As to the reputation of the Holbrook bells, they were everywhere celebrated. They were exhibited at the industrial exhibitions throughout the country, and came in competition with the bells of others, and always achieved the highest awards; and never, in a single instance, receiving any but the highest award.

In any even, upon climbing to the steeple, I determined to climb higher, yet another two to three stories above the bell. In a small room with windows all around I was confronted with a 360 degree view of New Haven. Some of the window glass is original and nearly opaque. But the windows facing First Church, also known as Center Church, were clear and relatively clean. This too is a historic church... the Congregation was established in 1639. The current First Church as depicted here was designed in Georgian style by architect Ithiel Town, and was built in 1812. The Center Church Crypt contains the identified remains of about 137 people, and the likely remains of over 1,000 that are unidentified. Sarah Rutherford Trowbridge has the oldest dated stone (1687) in the Crypt. I'll be visiting this in a week or so...

Here are some photos I took from North Church looking across to Center Church. The reflection in the window was by choice. I wish I'd "chosen" to shoot with a PL too just to see what the result would have given. 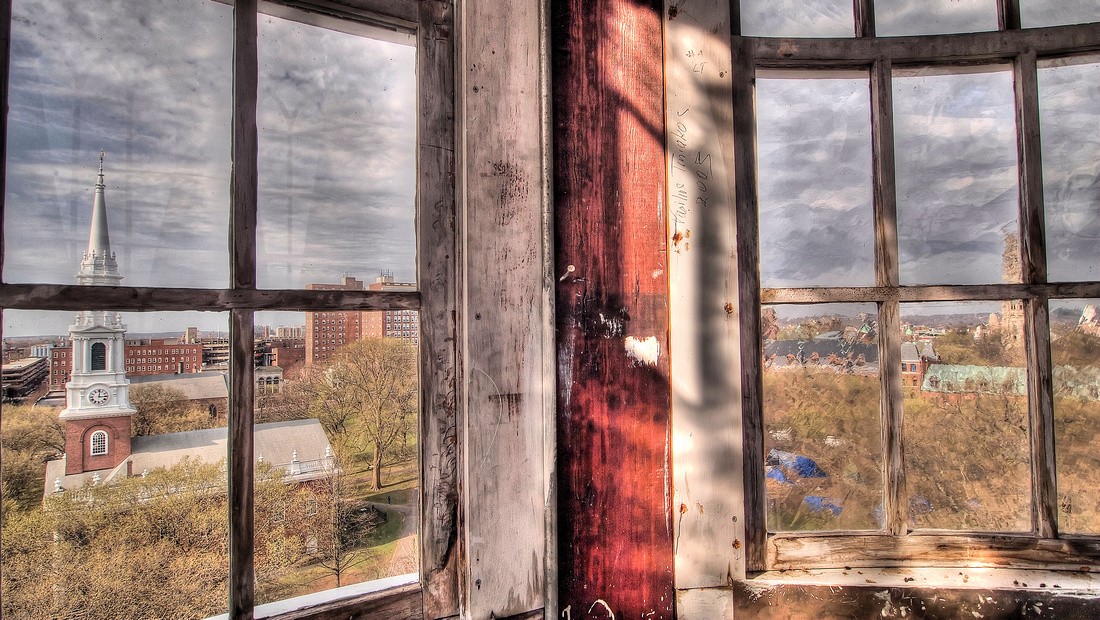 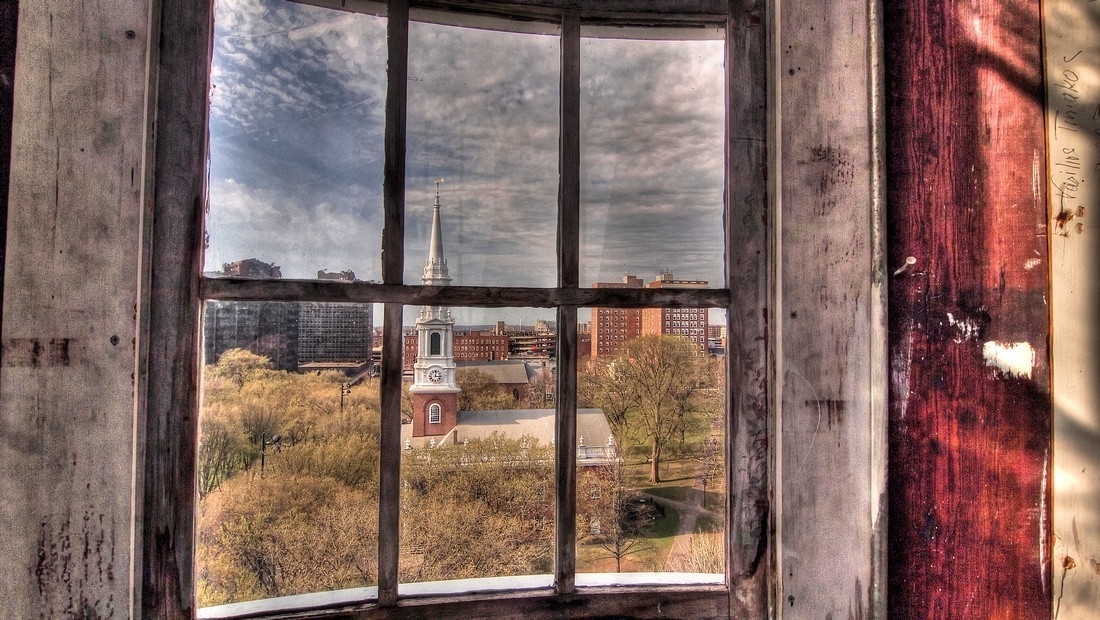 I am not sure which of these two i prefer... I think I like the first, skewed as it is. any attempt to straighten it would skew it one side or the other too much. I do somehow like the odd composition it represents. Here I attempted to stitch several together. Something of a failed attempt, but still interesting.

Another failed attempt I think, but interesting nonetheless... despite the roughness of the room as shown previously, note the beautiful window treatment and detail at the top. This treatment is echoed throughout the church, and you will see repeated in the facade below... 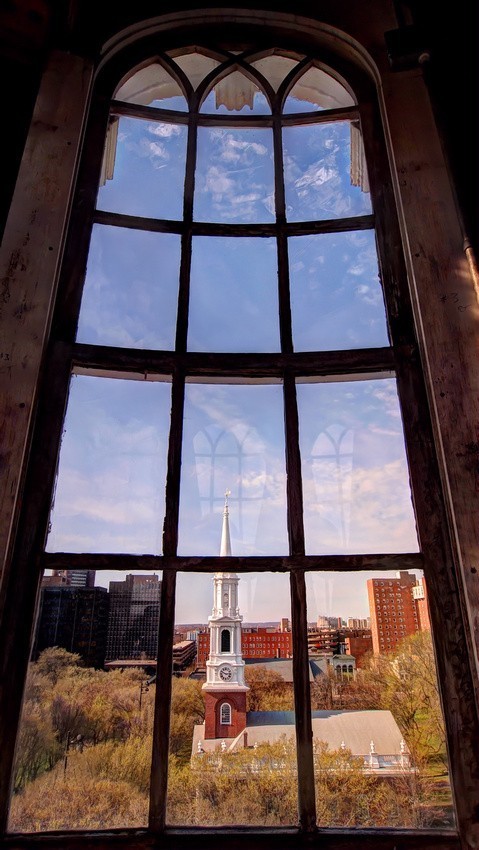 Here's a photo I did not take. If you look at the uppermost tier of windows just under the dome in the steeple, the two farthest away to the right side are the one through which i shot.

The following was shot one floor down. 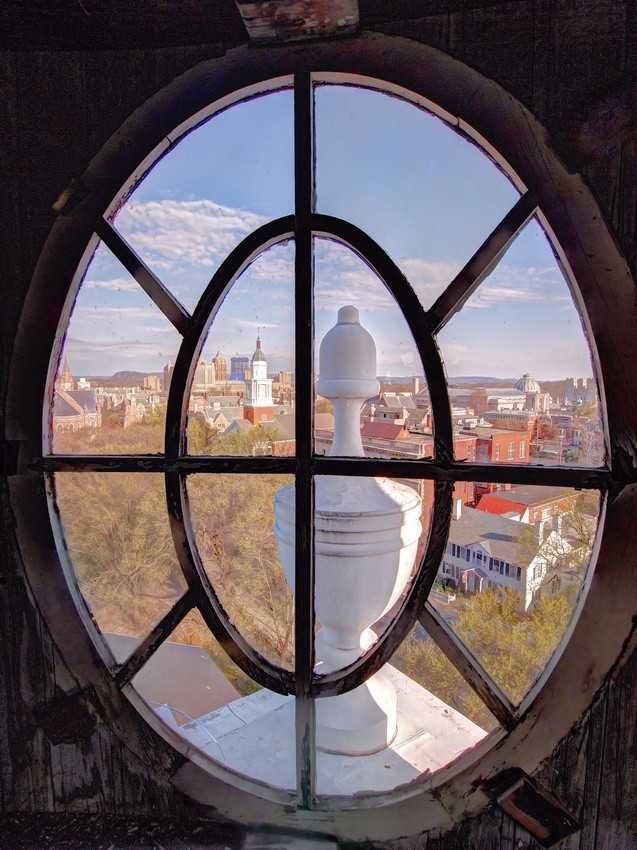 Finally, the facade... taken after returning to the ground. Some perspective correctlion applied here as I was slightly off axis... 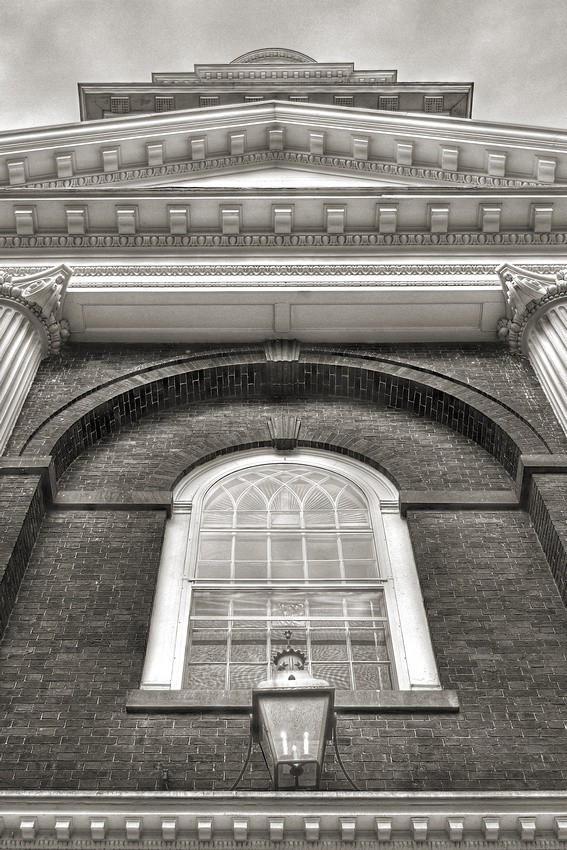 Awesome images (and story). The processing makes it vivid enough to think I'm there without venturing into over-the-topsville. I envy your architectural photo skills.

Quite dramatic images and a great story to go with them.