What started as seemingly some kind of "cultural dispute" between senior executives at Olympus is turning into a major financial scandal. The company has now admitted hiding losses for 20 years and has currently lost 70% of its value. It seems unlikely that we can expect anything on the camera front for some time to come, if at all. It would be a shame if a company with an illustrious history in camera design and manufacture were to disappear, but with shocking revelation after shocking revelation and the scale of the figures involved, it seems unlikely that there will ever be a return to "business as usual".

Its possible the brand and its current products can be picked up by another company and survive in some way but any notion of it continuing as before is surely impossible.

For the latest on what is proving to be an endless stream of ever more damaging revelations, here's a link to the Reuters website. 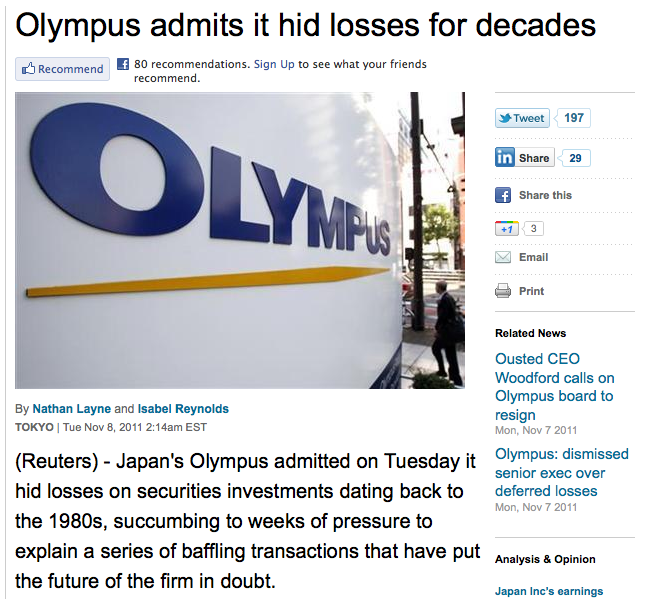 (Post from my blog at:- Soundimageplus: Olympus in deep trouble.)

So, Olympus is a Japanese Enron after all... Sad.

This is a little misleading. The story says "hid losses on securities investments" dating back to the 1980s, not overall company losses. The loss in value of shares does not immediately affect the viability of a company, only its ability to raise new capital on the share market. These losses were at times "deferred" and accounted for in "fees". Some very questionable cover up but it doesn't necessarly mean the company is in financial trouble regarding its photography business.

There have been some dodgy lawyers and accounting firms in the fray and obviously some senior management involved too.
S

"There is a serious danger that Olympus shares will be delisted. The future of the company is extremely dark."

"The disclosure leaves Olympus, its directors and its accountants open to possible criminal charges for suspected accounting fraud and shareholder suits, lawyers and analysts said, raising questions about the future of the firm"

"Takayama said he believed the company may have initiated the loss-postponing scheme when its earnings had taken a drastic turn for the worse, possibly during a period of yen strength."

"But there are still investors who won't take chances and will continue to sell their holdings so the company could fall to its book value, after which it could be a potential acquisition target"

Not quite sure how viable all this makes Olympus.
S

I'm guessing that this might also open other companies to scrutiny, since the wall of corporate and cultural corruption in Japan has now been broken.

The problem may not be financial but legal. If Olympus broke the rules - and it's hard to imagine how they didn't (or is it?) - then the lawyers and regulators could do for them irrespective of their financial viability.

How about a take over of the imaging section by Canon? They's get a ready made CSC:smile:
S

olli said:
then the lawyers and regulators could do for them irrespective of their financial viability.
Click to expand...

And that viability, which is firstly open to question, since it seems Olympus have been hiding substantial losses, is being eroded hour by hour. Large companies depend on investment, and its difficult to see where thats going to come from now.

Its damage limitation now and unfortunately its going to impact on reputation and sales. Its going to be a hard sell for the camera shop saleperson to convince a customer that Olympus is the brand to go with. Since the name is all over the news as synonymous with corruption and loss-making, I'm sure many will opt for something else.

Michael Woodford in an interview with Bloomberg - 43 Rumors | Blog | HOT UPDATE: Olympus admits mistakes. Woodford prepared to return? is keen to try to turn things around, but whether the shareholders give him the chance is another matter.

I'm just sad that a brand that has given me a lot of pleasure over the years may be on the verge of oblivion. I'll love to see it survive, not just because of that but because the more competition there is the better for us as consumers.

soundimageplus said:
Michael Woodford in an interview with Bloomberg - 43 Rumors | Blog | HOT UPDATE: Olympus admits mistakes. Woodford prepared to return? is keen to try to turn things around, but whether the shareholders give him the chance is another matter.
Click to expand...


Wasn't it the board that had issue with Woodford, not the shareholders? According to your linked article...

the second-biggest overseas investor “Harris” says that “Woodford should return to run the company and conduct the house cleaning“.
Click to expand...

Also, the company (which is of course a legal entity) according to Bloomberg, is considering legal action against 3 former executives including ex Ceo Kikukawa. I am not sure what that would achieve as one would expect that any punative damages would be small compared to the assets of the individuals and that would involve a lengthy and costly period of litigation.

olli said:
How about a take over of the imaging section by Canon? They's get a ready made CSC:smile:
Click to expand...


No thanks. Why would Canon want another mirrorless camera on their books?

olli said:
The problem may not be financial but legal. If Olympus broke the rules - and it's hard to imagine how they didn't (or is it?)
Click to expand...

An awful lot of what happened on Wall Street leading up to '08 was, amazingly enough, within the law. It seems entirely possible that something like this could be too.

PeterB666 said:
Wasn't it the board that had issue with Woodford, not the shareholders? According to your linked article...
Click to expand...

From his interview, its the shareholders who have to get him back.
M

So who has shares in Olympus here?

Probably suspension of share trading or delisting until the crisis is over would be the way to go.
M

The other sad story is Kodak has sold its sensor business:

I am looking forward to getting the Yakuza tattoo / skin for my E-P3!
S

My prediction is they'll find this practice is more widespread than Olympus.
M