agentlossing said:
So is the sensor not the BSI 20mp version from the OM-1?
Click to expand...

Apparently not and that was also just a rumor.

doxa750 said:
Apparently not and that was also just a rumor.
Click to expand...

That is a bummer, but I suppose it's to be expected with the gap between the OM-1 and OM-5 prices.

Maybe the very best upgrade of all is the naming convention changing from OM-D E-M5 Mark III to the simple OM-5!

agentlossing said:
That is a bummer, but I suppose it's to be expected with the gap between the OM-1 and OM-5 prices.

Maybe the very best upgrade of all is the naming convention changing from OM-D E-M5 Mark III to the simple OM-5!
Click to expand...

But then it's a downgrade with the OLYMPUS being replaced by OM System on the 'pentaprism.'

TNcasual said:
But then it's a downgrade with the OLYMPUS being replaced by OM System on the 'pentaprism.'
Click to expand...

That alone does make me want to buy the OM1 which I don’t need…but just to have the very last “Olympus” camera.

TNcasual said:
But then it's a downgrade with the OLYMPUS being replaced by OM System on the 'pentaprism.'
Click to expand...

I wouldnt be suprised if there is a third party option to rectify that soon...

It wouldnt have hurt if they at least made the new branding nice, as it stands now, it is fugly.

Here’s an interesting watch. It’s Robin Wong’s take. He goes on a bit (the video’s just over 40 minutes long) but I love his energy and agree with all his points but especially his assessment at about 25 minutes in; “all the important things about the camera, the OM5, are exactly the same as the EM5 Mark 3”.

If I was starting out, I’d buy the OM5 but, as I already have the EM5iii, I’ll wait to see what the next release has to offer.

Supporter
Yikes... It inspires very little confidence in OMDS to be honest. So few updates, just better stabilisation and some minor firmware updates, HHHR being the most significant. Micro USB is just emberassing on a "high end" model in 2022.

I'm not convinced the weather sealing is actually upgraded; I'm very certain that Olympus always under-rated its products, and an IP53 rating would've been achieved by most if not all of the E-M5 and E-M1 generations, if only Olympus had bothered to have them certified that high. Note that many Pro lenses previously rated IPx1 are now listed as IP53 compliant combinations with the O-M1 and OM-5.

This makes me wonder if Olympus was quite far along on the OM-1's development, and OMDS just released it after testing was complete, but then didn't bother to spend any significant funds on developing actual new cameras under its own wings.

The new lenses that followed the OM-1 were good news (but then many OEM lenses are developed by third parties, might be the case here too), but this camera body really hurts my confidence in the company's long term commitment. I'm not a system builder, might just buy an E-M1 iii or OM-1 at some point and add a single lens to it to use until broken, but if I were a system builder this announcement would make me think twice.

Glevum Owl said:
Here’s an interesting watch. It’s Robin Wong’s take. He goes on a bit (the video’s just over 40 minutes long) but I love his energy and agree with all his points but especially his assessment at about 25 minutes in; “all the important things about the camera, the OM5, are exactly the same as the EM5 Mark 3”.

If I was starting out, I’d buy the OM5 but, as I already have the EM5iii, I’ll wait to see what the next release has to offer.
Click to expand...

I think that statement sums it up pretty well:
The camera is not bad at all, but for a lot of people it's simply not what they expected, especially after some earlier rumors. It's an E-M5 Mark III with a faster processing unit, better IBIS and additional computational features like HHHR and Live ND.

Everything packed inside the same housing as the last E-M5, which comes with a number of concerns: The plastic construction has always been a point for criticism, people who enjoy a good build quality for their cameras were let down and there were a number of reports regarding broken tripod mounts, especially when used with carrying straps which attach into it. The EVF still is at 2.36 million dots, which to be fair seems the de facto standard in this kind of price range, but in late 2022 I think it would've been an opportunity to step forward and leap ahead. Speaking of late 2022: While the choice of micro USB in late 2019 for the E-M5 Mark III might have been somewhat acceptable, three years later there simply is no excuse in not replacing it with a much more common, much more capable USB-C connector.

To me it seems like OM Digital only tried a half-baked product, recycle as much as possible from the E-M5 III and just replace some of the internals - done. The E-M5 Mark III in my opinion was one of the most interesting cameras in the late Olympus line-up, but instead of taking the opportunity to further improve this product all around, the left the handbrake on and started moving...

JensM said:
According to one of the rumour sites from earlier this week, those models has been axed. It somewhat fits with the newly held (heavy) discounted sales on them, the EM-1MkIII was at $1300 over here since early august, but no dumping price on the EM-5MkIII, it held at $1200, but you could get it with the 12-45 f:4 for $1700, not very impressed by that at all.
Click to expand...

Moderator
If this company wants to compete with full-frame mirrorless cameras in this same price-range, such as the Nikon Z6-II, they need to put their top of the line sensor in it- not one that has been available in the Olympus line for years.

The Stacked BSI 4/3 sensor would make this competitive. The current configuration- if you have a large investment in lenses, does not give any better performance than existing cameras on close out below $1000. The price for a stacked BSI sensor is too close to the Sony A7 IV and Nikon Z7-II. Bringing better performance offered by the advanced sensor down to a lower price might get some sales.
M

I'm pretty invested in M43, and the 45/1.2 is my favorite lens lately, but the recent body releases do not inspire confidence in me. The GH6 is very video focused, and I'm not the target audience. The OM-1 competes in the same price bracket as the Sony A7 IV and friends. And now the OM-5 feels like too minor of an incremental refresh.


agentlossing said:
So is the sensor not the BSI 20mp version from the OM-1?
Click to expand...

DPReview suggests no. Maybe the new sensor came too late in the development; this would also explain the old menus. Maybe it added too much to the bill of materials cost. Maybe they fear cannibalizing OM-1 sales. It's an absolutely huge let down, though. The old 20 MP sensor was first released with the E-M1 II in 2016, if I understand correctly.

Darmok N Jalad said:
I actually like a lot about this camera too. I don’t care for some of the button and menu limitations that the 5.3 has versus the 1.3, so I really hope they move the 1.3 menus and features over. Things like easy AF-mode control, and a programmable button for face detect on/off. Really about the only 2 custom features I wish my 5.3 had that were easily possible for software engineers. Throw in HHHR and LiveND, and it’s more than good enough for me. Might be an upgrade for down the road.
Click to expand...

You’re in luck - it has all of this

Yes, not only did I get screwed to the wall, but the camera had only been out for about 3 months and they offered a $200 discount (don't forget, this was well BEFORE the E-M1.3 came out), so the new E-M5.3 was the most up-to-date camera they offered (arguably somewhat more advanced than the E-M1.2).

Moderator
I completely agree- I learned that lesson with the EP2. Never bought an Olympus camera "just announced" after that. Paid $120 for an EPL1 not long after it was introduced and the same for the EPM1. Just came to expect a high-turnover and steep discounts of the prior models.

I doubt this new entry will sell very well, and deep discounts will have to be offered.

Ignoring the camera itself and looking at things from a business perspective, could it be that OMS are simply finding their feet with an easy and relatively simple incremental update? It might also be a way of testing their design and delivery processes. I hope that the OM(s)5 is merely a stepping stone to 'better' things (new sensor, focus tracking, better menus, loads more video options, headphone socket). And maybe branding that doesn't suck (totally agree with @JensM on that one). Maybe 'Omni' as a name but no idea on a corresponding logo.

Moderator
The viewfinder is 2.36M, that is low-end these days. It is 50% more than my EVF for the EP2. This simply does not compete with other entry-level cameras.
As a comparison, the entry-level Nikon Z5 ($1000) has 3690k-dot (Quad VGA) OLED. 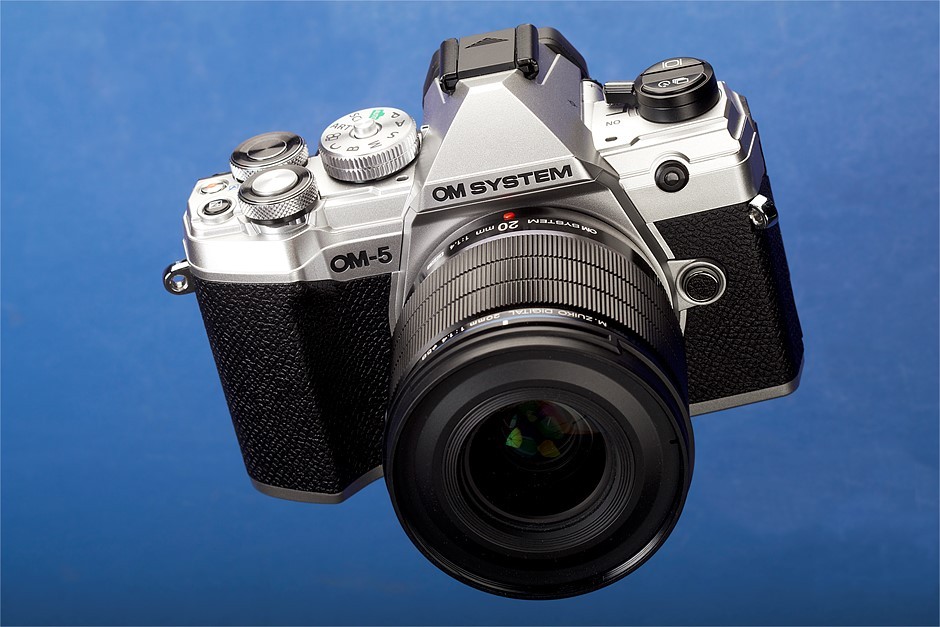 In the middle of the OM System lineup, the OM-5 promises yesterday's top-tier performance in a lighter, more compact body. Is it enough to stem the tide of competing cameras with bigger sensors and lower price tags?

The DPReview has such lines as "Upgraded processing gives an older 20 megapixel sensor a new lease on life."

Look for this camera to be deeply discounted in a few months. The real worry- if "OM Systems" is going to survive. This camera is way overpriced and underfeatured.
This camera needs a newer sensor and a higher resolution viewfinder. The website also needs someone to fix the broken links when looking for details about the camera. That is the fluffiest product page I've seen since the Nikon Df.
Last edited: Oct 30, 2022

The problem is not that it's a bad camera but rather it's probably not going to sell very well. For many folks the OM-5 shows that OMDS is going to be a small underfunded operation and that they may want to invest their gear money elsewhere. This is especially sad since I don't think Panasonic is all that interested in mu43 either at this point.