OM-D and PL25 - way too serious for a concert

Went down to one of our local live music venues, First Avenue in Minneapolis, this weekend and was not allowed in with my E-M5 and PL 25mm lens. I had been in there a couple weeks ago with my E-M5 and the 20mm, but I guess the almost-Leica lens was a bit too conspicuous.

What I found interesting, is that their rule is actually that no interchangeable lens cameras are allowed (outside of authorized press). My wife's Pentax Q is not welcome, but a X100 or Leica X2 would be good to go. Hmmmm... I think a Ricoh GXR may really confuse them!

Anyone else run into a similar rule for a concert venue?

I did actually try that on my wife afterwards! Ummm, yeah, and she didn't really agree with my reasoning.

The Fuji X-S1 Superzoom with 624mm equivalent and EXR technology would be a good choice. If the rule is no interchangeable lens cameras, fine. I'd love to see them figure out how to take that lens off the camera.

Locally they wont allow "professional" cameras. Of course the camera patrol nazis arent photographers and really have no idea what constitutes a "professional" camera. So anything thats BIG is refused, and small cameras end up being allowed. So an E-PM1 with a kit lens would probably pass, but I don't think the XS-1 would.

oh yeah...I kinda figured that.....it just shows up how arbitrary the rules are.
I

Small profile cameras. No consumer level dslrs. I've seen people with some pretty big zooms though. Wasn't so P&S savvy at the time to know what they carried. Was better than my cellphone though.
A

I've heard of the 'no professional cameras' rule but I've never come across it in Melbourne.

There are a few venues that prohibit photography inside the theatre, but I work around them in a number of ways.

One is to use something small like the Fuji X10, which makes no noise, is very low profile, and has an optical viewfinder. Another is to pick seats that you know will be surrounded by other people, like the middle of the stalls; or away from everyone, like in a third-level box which only seats four people.

At a choral performance I saw a fellow using a m43 camera, filming the performance using liveview. One of the ushers couldn't quite get to him, so he shone his flashlight at him and shook his finger menacingly! This same usher told off someone for taking photos of the performance with his cellphone.

One thing that really disappointed me was when my favourite guitarist, Yngwie Malmsteen, came to Australia. Before we entered we were told 'no cameras allowed', so I ran back to the car and ditched my gear. But inside, security did nothing as scores of people were taking photos and extended video! I was shattered! All I had was my terrible cellphone camera, which was better than nothing, I guess. 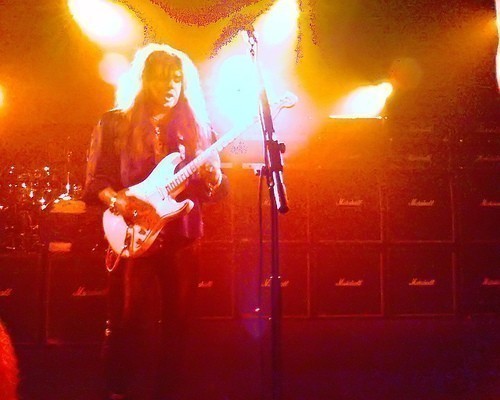