(Just to say adaption is a hybrid word from adaptation and adoption, which is more or less what I've done!!)

I've just got the ownuser battery grip for Panasonic G series. Just got being the operative words since it took 23 days to arrive from Hong Kong to the UK!!

Since I don't have any of the cameras it fits legitimately (more later!) I tried it on on my GF1. It works perfectly, though looks a little odd, because the tripod thread is in a different position. It therefore looks a little off centre. However it does work, powering the camera and giving a vertical grip. So if you're in the market for a battery grip for your GF1, there's one available.

It is very light, and adds virtually no weight to the camera, but as has been mentioned before, it does have a serious flaw. There's no way to lock it to the camera, so it does move from side to side even when screwed in tight. Very irritating, still straightening it up gives you something to do between taking pictures!

Now for the interesting part. Using it on a GH2. Its not meant for the GH2 and you definitely can't use it to power the camera, as the "dummy" battery which fits in the battery compartment is the wrong size. (too big) However, and I say however with all the usual warnings about health and safety, you can get it to operate a vertical grip for the GH2. By putting in a GH1/G2/GF1 etc. battery and connecting it to the remote/mic socket, the vertical shutter button then works for AF and firing. Both batteries are the same voltage, but I can't guarentee it won't fry your camera eventually if you try it. I'm prepared to take the risk, others may not be. Plus if anyone thinks I'm doing something hazardous here, please let me know!

Firstly the grip does fit the camera, though the tripod thread not being in exactly the right place, it is a few mm's slightly further back than it should be, though this isn't a problem. This is the reason for me buying it, just to give a better "feel" to the camera. I've always had problems with the GH's in terms of holding and using them and I wanted to see if this grip improved things. I was planning to get it & if it fitted, this is how I wanted to use it. Its not perfect because its not designed for the camera, but it does achieve my aim, which is to make the GH2 a better handling camera for me. It adds very little weight, though I find the camera feels less flimsy with it on particularly when using lenses like the 14mm and 20mm pancakes. I've actually already butchered mine, cutting off the dummy battery completely, so it looks better.

As I said its far from perfect but it mostly fulfills its purpose for me. I'd absolutely love a custom made one from Panasonic, and there were rumours, but these don't seem to have materisalised. However in the absence of that, I'll carry on with this. The vertical shutter button is a bonus, I had no idea whether that would work. Obviously no extra power for the camera, but there is a handy little compartment for storing a spare battery!!

For some its obviously a pointless exercise, but my favourite camera outfit ever was a Pentax MZ-5, battery grip and 43mm f/1.9 lens. I've always wanted to see if I could get a digital equivalent of that, and in terms of weight and size, the GH2, this grip and 20mm lens is the closest I've ever come. I've just been out to use it to take some pictures and I loved the feel of it. It doesn't exactly mould to your fingers perfectly but its close enough & I loved using the vertical shutter. Its beautifully positioned. So a sort of successful outcome.

Incidentally, if you're interested in it for the cameras its designed for, I think it would work very well, if you can put up with it moving from side to side occasionally. It did seem with two batteries to slightly speed up the AF on my GF1, but don't take that too seriously as I only tried it briefly.

I've taken a few pictures so you can see what this looks like. 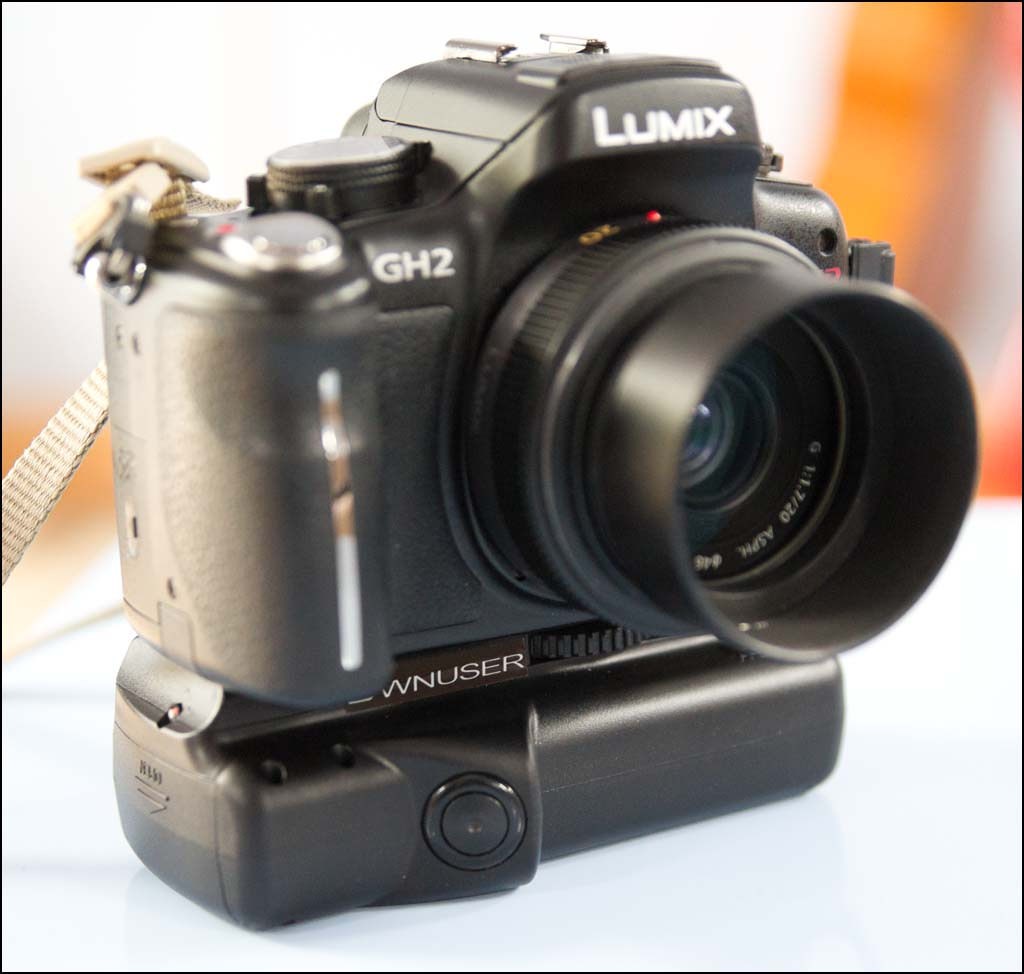 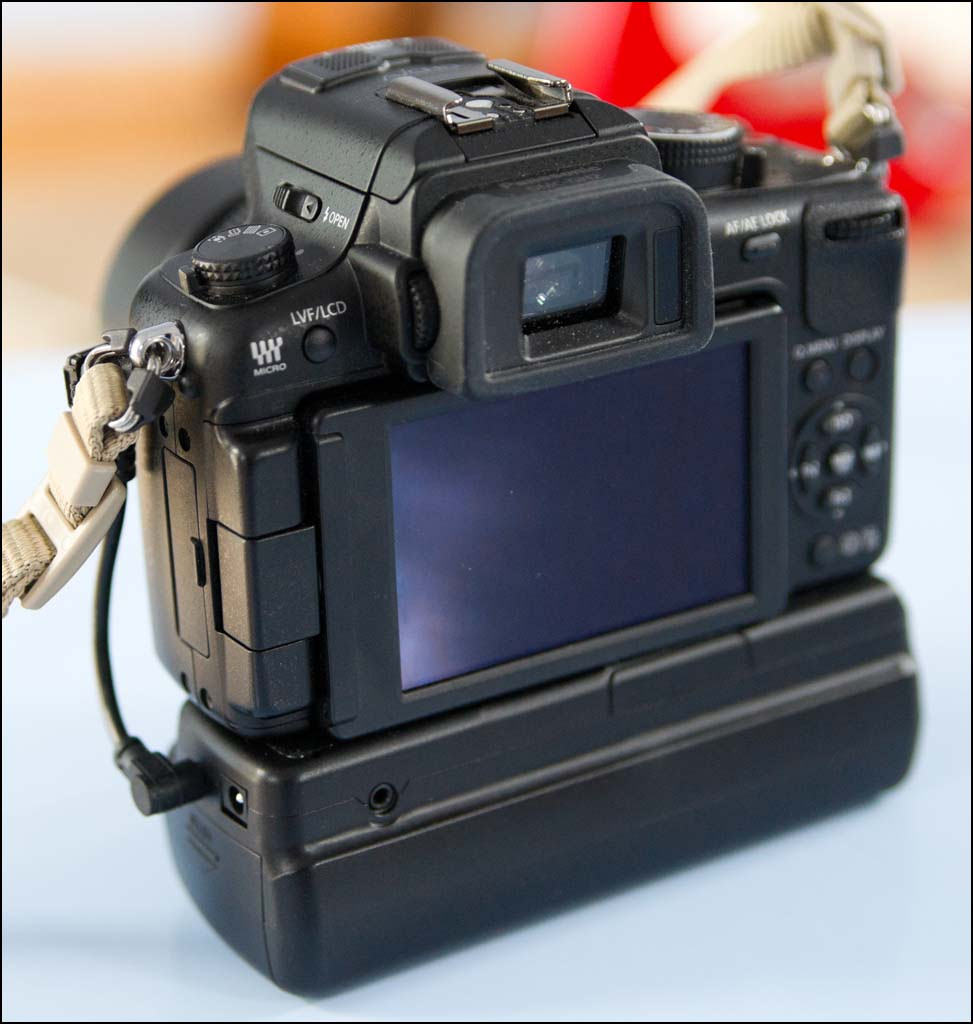 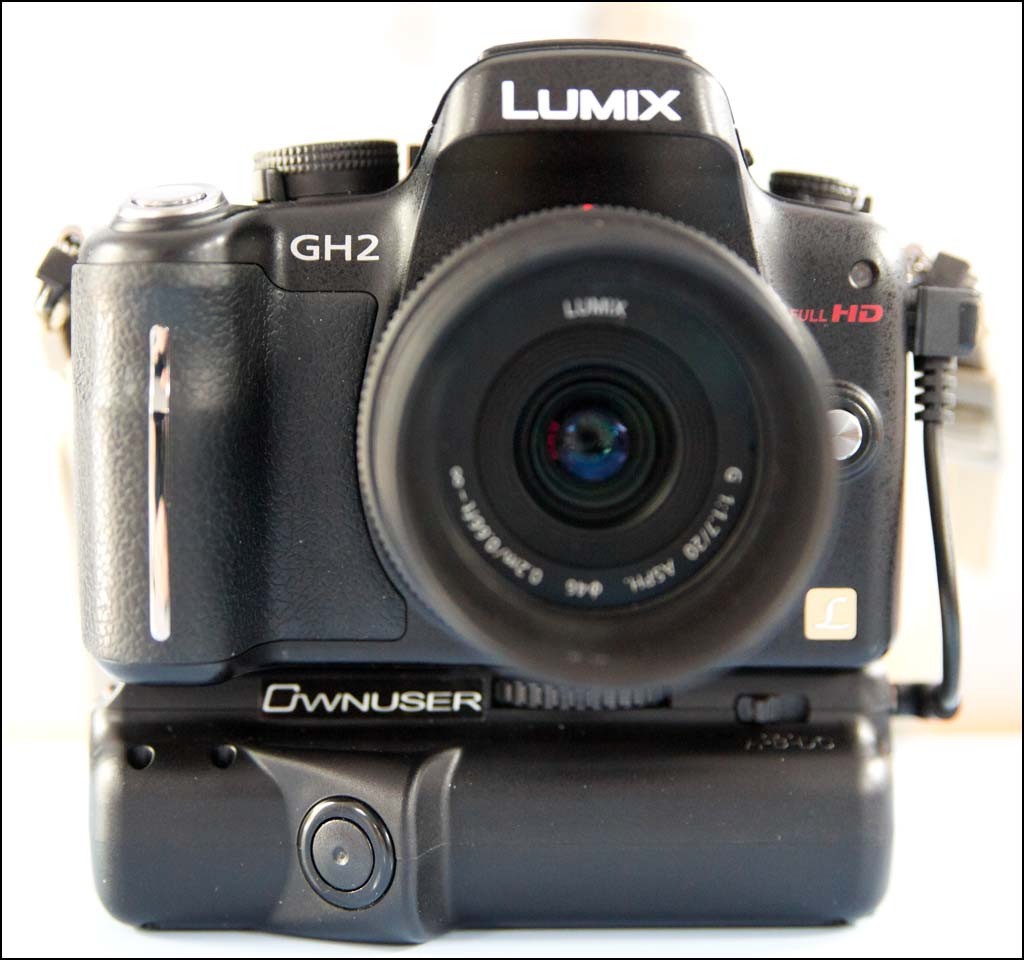 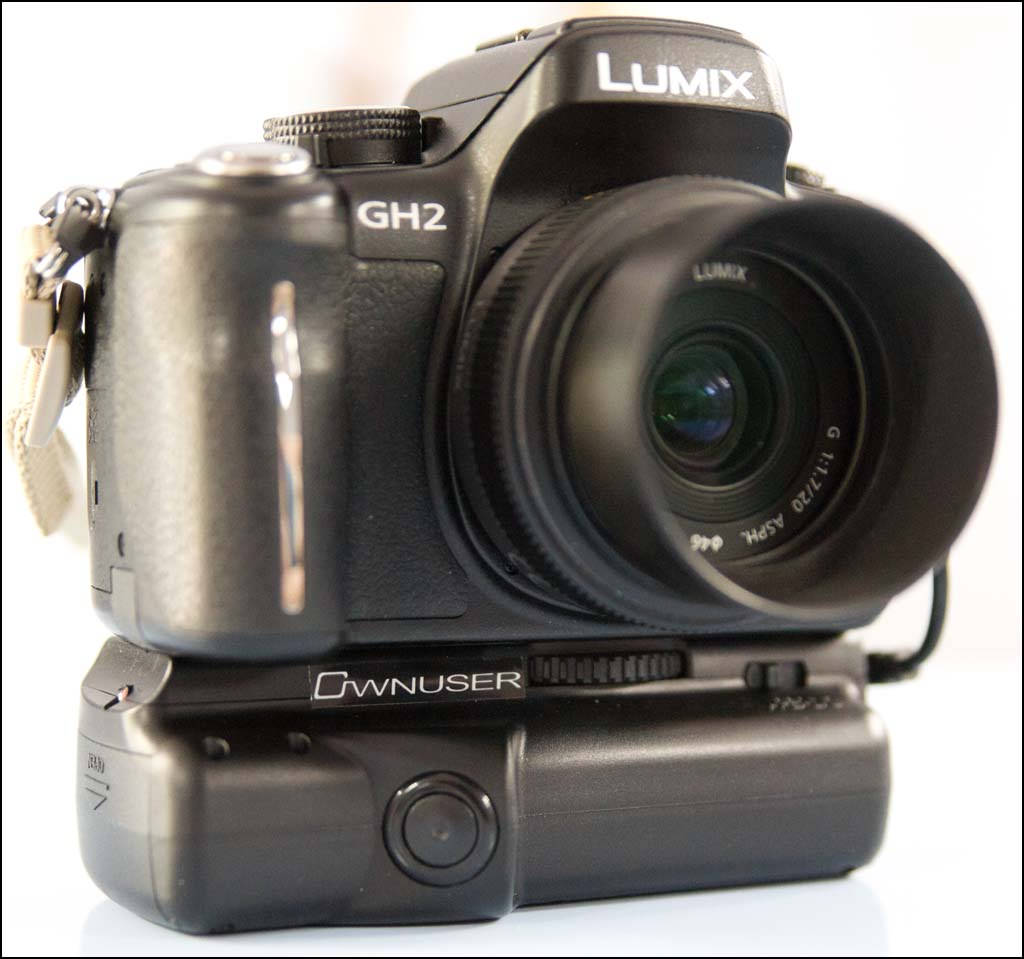 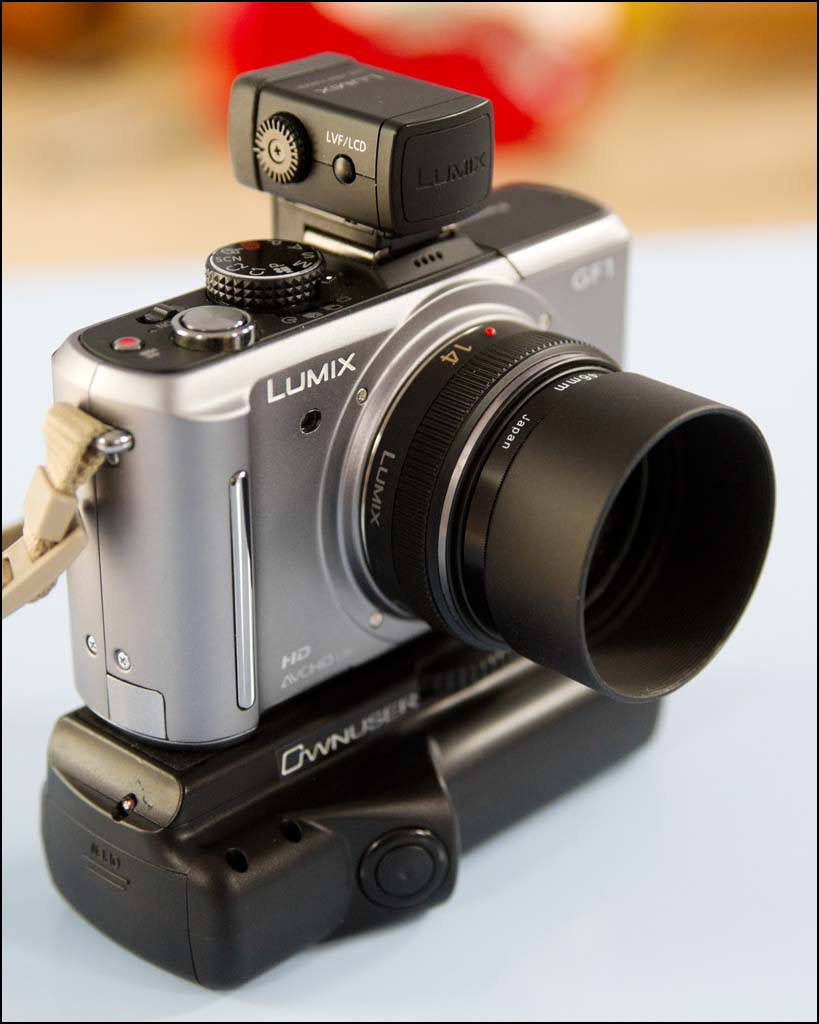 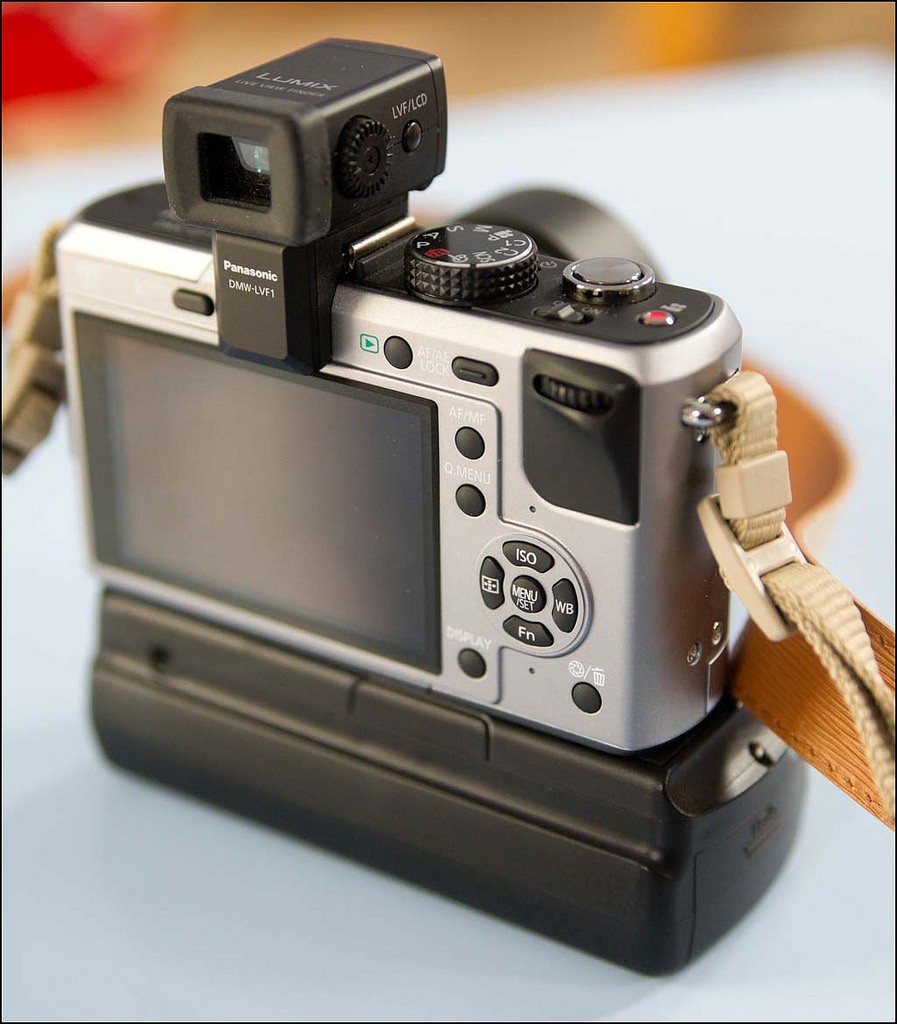 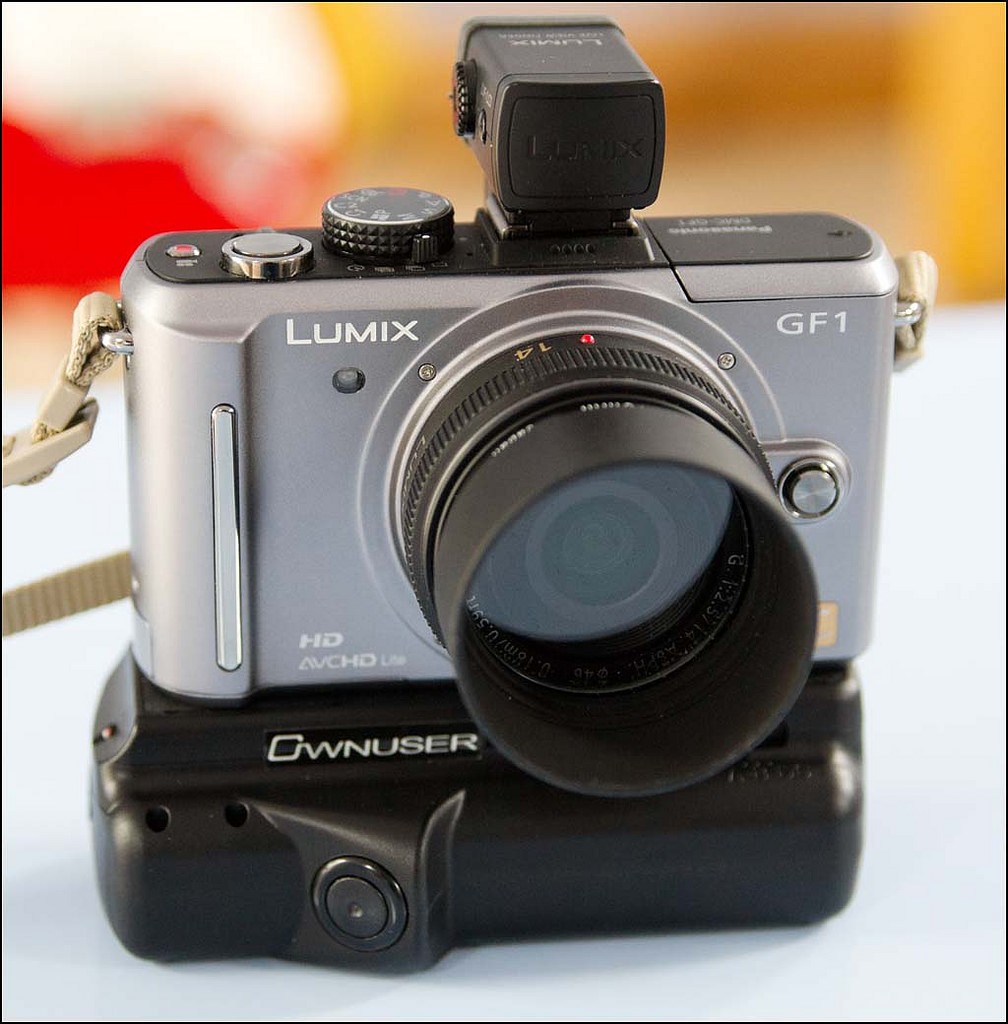 Here's a true camera Luddite question for clarification, David. So the purpose of a battery grip is to give extra juice to the camera for the long haul?

Mostly yes. In addition a grip can speed up the performance of a camera, give better handling and provide an additional shutter button when holding the camera verticaly.

As long as it is between 8.4 V and 9v it should be ok. On my GH2, I use the panasonic dmw-dcc8 with a custom cable built like this with one male DC Power Plug 4.75mm x 1.7mm and one male Tamiya connector and I connect it on 8.4 v batteries like this one : Airsoft Battery NiMH 8.4V 3800mAh Flat Tamiya Connector | eBay and I get 6 hours power... These batteries need an hour to be fully charged... With two of them, I can work with my GH2 for 12 hours long.