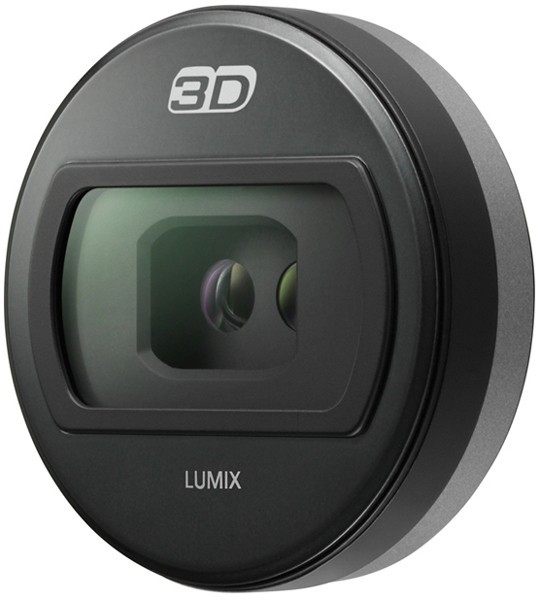 Having already taken the lead in 3D technology, Panasonic has had great success with the launch of their 3D-capable VIERA televisions and 3D Blu-rayTM Disc Players. The 3D market is predicted to steadily grow over the coming years, as explained by industry analysts, Screen Digest: “As consumers slowly replace the main TV set in their house, and as the price of 3D TVs continue to fall, Screen Digest expects that 3D TVs will be in around a quarter of households in major developed markets by the end of 2014***. “

The introduction of the 3D lens aims to respond to demands of consumers who want to enjoy 3D shooting for themselves whilst also expanding Panasonic’s range of 3D products. The lens will allow users to capture images in 3D which can then be viewed back using 3D-capable VIERA televisions in the comfort of their own home.

“As consumers slowly replace the main TV set in their house, and as the price of 3D TVs continue to fall, Screen Digest expects that 3D TVs will be in around a quarter of households in major developed markets by the end of 2014. “

Until now, 3D shooting with an interchangeable lens system camera has only been possible by using panorama systems or a combination of two lenses and two CCDs, but these systems have drawbacks including the need for a dedicated 3D camera and the difficulties of capturing moving objects. Panasonic's new 3D lens for the LUMIX G Micro System features two optical systems installed within the diameter of the lens mount, creating stereo images from the left and right lenses, to be processed with a 3D image processing system. Thanks to Panasonic's advancements in optical technology, image processing system, and lens barrel design, the 3D lens still manages to retain an extremely compact size.

Through expanding its range of 3D products, Panasonic will continue to lead the industry by bringing a true-to-life 3D experience to its customers.

I'm sure this will bring tons of eyes to Panasonic. As I posted elsewhere, I'm probably the one of the few around who hasn't seen any 3D movies, yet.

What do people think about 3D and still photography? Is it good, interesting, a marketing ploy to sell more stuff...? I wish I still had my grandparents stereoscope for their photographs from the later 1800s. I keep hoping to find it hidden away somewhere.

I am not very enthusiastic about 3D photography, but I imagine it will get better and better to the point where I will be. As far as 3D movies go, I have seen a couple in both 2D and 3D versions and usually prefer the 2D for better brightness and color.

One of the interesting aspects of 3D technology with dual lenses is that it is possible to have two small sensors with some space between them, which creates tremendous opportunity for depth of field control in 2D images. Right now, 35mm format provides the capacity for more narrow DOF than 4/3 format, but two lens-sensor units with 4/3 sensors, spaced two inches apart would not only allow far more narrow DOF than 35mm format but would also allow the photographer to choose the depth of field during postprocssing. Some remarkable possibilities there.
A

Panasonic, please focus on the basics first. Get that 14mm lens out the door! And more of this high quality primes equal to the 20/1.7!

I agree with Andrew. Micro 4/3 has a "lead" in terms of the lens lineup, but there are plenty of gaps!
S

Like others I wonder where this is going? Because of glasses and the corrections I have to have made for my eyes I have problems with 3D. Of all the people who I know who have seen it, more have problems than not, headaches etc. Whether thats common I don't know but if true it would seem to indicate that the market for this is far from universal.

I too would also have liked to see Panasonic releasing some of the lenses that we've all been asking for. Fast wide primes etc. I thought that the fisheye is somewhat of a "novelty" lens and feel much the same about the 3D lens.

3D may have a place, but all pictures and all movies aren't suddenly going to go that way. I doubt that we'll all be spending all our evenings in strange glasses. Its obviously something that is generating a lot of attention, and it may be something that becomes a significant part of our entertainment media. Then again it could be this years quadrophonic audio.

I'm with David .. where are the new lenses Fast Primes, Panasonic can do it they have the design and manufacturing capabilities few can match.

There is a large niche of photographers in m43 that like to exploit Depth of field mostly narrow now we will have a lens that gives us an apparent Real life image when viewed on a new Viera TV.

It sounds like a great idea for holiday snaps to give images for Holiday snaps or other scenes the WOW factor, until I see the results (don't know how yet) I think its novel in many ways, besides I just upgraded my TV to a 54" Viera Plasma (non 3D) as prices are low now,its great for Blue Ray movies, so now I have to get a 3D Viera TV AND a lens.
D

Ugh. As someone who is in the video industry, I hope that the fad of 3D passes, and does so quickly.
J

I don't own a TV and I don't intend buying one. I don't care about 3D. I want my low light lenses!!

I'm looking forward to 3D. I have been watching 3D video on a Pan 3D telly, wow, impressive. Samsung 3D telly can convert 2D content into 3D real time.
I'm curious about the 3D effect, have heart it's not very impressive, but I want to experience myself.

I
Micro 4/3 Micro 4/3's in a Professional Environment