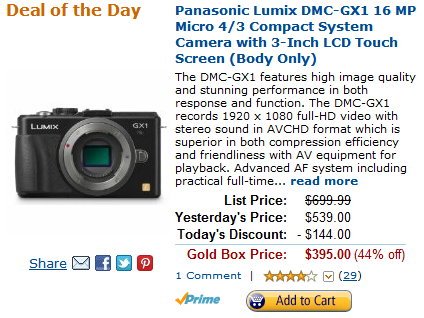 The above links contain our affiliate code so we get a small credit for referring you if you click our link before putting the item in your shopping cart. Your price is not affected by using our link. Thanks for supporting Serious Compacts!

Man, that is tempting!

micro four thirds is really teaching people to wait one body generation. If you can wait a year after release, they GIVE the cameras away. I can hardly wait until next Christmas when the E-M5 bodies are being blown out for $450.

Luke said:
micro four thirds is really teaching people to wait one body generation. If you can wait a year after release, they GIVE the cameras away. I can hardly wait until next Christmas when the E-M5 bodies are being blown out for $450.
Click to expand...

I wonder, though, if the OM-D cameras will be refreshed as often? I think it is the short cycles on the PENs and GFs that kill the resale value. If you look at the other side of the spectrum at FF, you have 4 year product refresh cycles, and you may only lose 1/3 of your body investment over that period. Totally opposite experience if you look at the compact system cameras. I guess the cycles are somewhat related to pro vs. prosumer, but also probably due to the fact that innovation is happening much more quickly on the mirrorless side?

The only relative safety is in lenses, I guess.

You may be right Kyle, but we'll see. Do you think E-M5 sales will still be strong after the GH3 comes out? How about 6 months after that. The E-M6 could very well show up around Christmas 2013......especially since the new PENs will likely be 90% of the same camera for half the money. They have started a cycle that may be hard to stop.

Tempting as it is, NO! I've spent thousands on gear since joining this forum, you lot are bad for me ;-)

kyteflyer said:
tempting as it is, no! I've spent thousands on gear since joining this forum, you lot are bad for me ;-)
Click to expand...

I just ordered one via the link on mu-43.com. Just too attractive to resist at that price point. And Luke is right, the time to buy a micro four-thirds camera (and any digital camera, really) is during the period just before it is about to be replaced until supplies get low after replacement and the price begins to rise again until all of the new-old stock is gone.

But the thing about this particular GX1 deal is, I'm pretty sure the camera isn't about to be replaced. This is just one of those Amazon.com deals. Chalk it up to the Olympus E-M5 effect, perhaps, and other imminent camera introductions.

Now, I have no doubt that when the GX1 is replaced, the body-only price will drop to $299 - at least on Amazon. That's how much I paid for my G1 (since gifted to a niece), my G2 and GF1 (both sold for the same price). My G3 (which I still own) I paid $424 for via my company's program with Panasonic Direct. So I'm doing okay with micro four-thirds camera bodies.